There was a coffee shop in my native San Diego that served as a permanent symposium for the Dragon Shirt Men. The fabric? Usually a rich, greasy silk, perpetually untucked, drifting down past concave bellies and terminating just above the kneecaps. I remember the buttons being either bright white or onyx black — sometimes with their own micro-insignia painted inside — further proof that the wearer knew the code of their own private universe. The dragons themselves were always gorgeously rendered and entirely generic; splayed across the shoulders, breathing fire, looking angry in the way that I suppose dragons ought to look angry. I heard rumors of a man who had a shirt with two dragons, whose bodies grapevined up the fabric until they arrived at the breast area, where they stared into each other’s eyes like mythical frenemies.

These dragon shirts weren’t part of any existing canon; they didn’t belong to either the Rowling or the Tolkien estate. It was the late 1990s and early 2000s, years before Game of Thrones made it to HBO, a moment in time where geek culture met the terrifying style demands of social life with the most relatable answer possible: Dragons, for the sake of being dragons. You probably know what I’m talking about if you were also young, gawky and part of the nu-metal youth. Long before Billie Eilish reclaimed outrageously garish dragon shirts in the name of Gen Z, they represented the way so many of us tried to be cool, without ever knowing how. 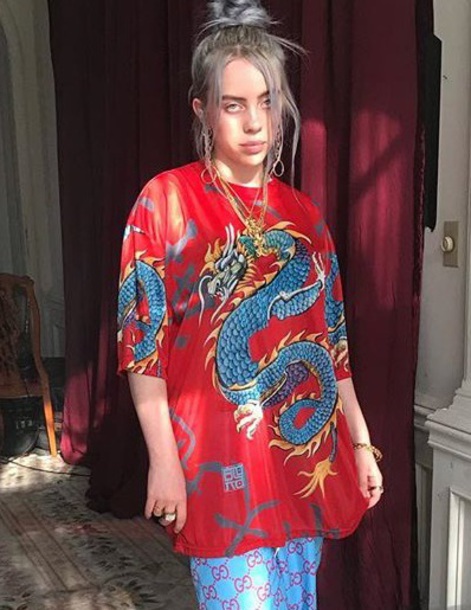 I was never a dragon shirt guy, but I always got it. The logic of fashion in high school was so much simpler. You wear something awesome and badass in order to be awesome and badass yourself — Metallica shirts, Dragon Ball Z shirts, dragon shirts, all stacked up next to each other in your local Hot Topic or Gadzooks. “I used to dress like my dad. I was preppy, a lot of Lands’ End and L.L.Bean Polos. I guess I was getting into Limp Bizkit and KoRn, and I was looking for a bit of an edgier style,” remembers Andy O’Connor, a 32-year-old heavy metal journalist in Austin, Texas (and a friend of mine). “My brother was getting into anime around the time too. So I think it was a combination of rebellion and emulation.”

O’Connor wore his catalogue of dragon shirts religiously through his preteen years, peaking around eighth grade. He’s no longer a member of the tribe, but you can still see the various ways the dragon shirt rebellion informed the man he is today. (Today, O’Connor primarily dresses in impossible-to-read black deathcore tees, and I called him up for this story mere minutes after he returned home from an Iron Maiden show.) The way he describes it, those shirts allowed him to tap into an inner rage he’d later exhume through a lifetime of thrash shows. Clair, a 27-year-old trans woman in Phoenix, tells me something similar. “It was nice to have a thing,” she explains, reflecting on her confused middle school years. “And dragon shirts were my thing.”

So, why dragons? This is the thing I’ve never understood. There’s a whole compendium of mythical creatures — minotaurs, trolls, gryphons — and yet, we settled on dragons as the primary aesthetic signifier for the geek contingency. It feels like we sold the rest of the bestiary short. Clair thinks it’s because dragons are the most mainstream of fantasy icons and also distinctly more masculine than the “fairies and unicorns,” both of which were thoroughly appropriated by the feminine wing of teen dorkiness. “The ubiquity made dragons less weird,” she says. “Everyone knows what a dragon is.”

Of course, you also can’t underestimate the natural majesty of a dragon. That’s probably my favorite thing about those shirts. Dragons are divas. They hoard ridiculous fortunes, glitter in the sunlight and hold a famously haughty disrespect for mortals. “They’re not exactly bound by land. They’re floating and flying, they could cross spaces,” remembers O’Connor. “That’s a big part of the appeal. Big balls of fire are just fucking badass, man.”

It’s difficult to say that dragon shirts went out of style, as it’s not like the fashion authorities ever thought dragon shirts were a good idea. But in general, the brazen, black-on-red loudness of Y2K graphic design was tossed aside by the beginning of the Obama administration — simply because it’s difficult to design a dragon shirt in millennial pink. That said, in 2019, it feels like we’re on the cusp of a comeback, piloted by people of a starkly different heritage than O’Connor and Clair. No less of an authority than GQ is recommending them as ahead-of-the-curve fashion choices, and as definitive proof that hell has frozen over, Urban Outfitters now stocks a wide variety of dragon button-downs — as if there’s been interdimensional bleeding from a 2002 Spencer’s Gifts.

Sure enough, with a simple search of #dragonshirt on Instagram, I was introduced to a whole coterie of young people who are using dragon shirts to look cool in a completely different way than O’Connor and Clair thought they were looking cool. One of them is Matthias Camu, a 21-year old from France who posts as @Matt_In_Hell, who shows off a wide variety of ugly dragon designs that cross so far past the outer rim of taste, that they somehow circle back around to being indisputable fashion. “What made these shirts are cool is the fact that they’re already vintage, and that if you have the right outfit, it will pass without any problem,” he explains. Camu, of course, pairs his dragon shirts with Matrix sunglasses, pinstripe lounge pants and tightly-packed beanies.

I suppose it was only inevitable for dragon shirts to become an appendage of that trash boy mystique — the people who are bringing back the parts of the 1990s and 2000s that we once seemed eager to forget. “The fact that it’s unusual is also an attraction,” he adds. “Because we think we’ll be the only one in our school to wear it.”

Camu adds that the ground zero for the dragon shirt renaissance is in Asia, so I message Kandanai Poonsiriwong, a 27-year-old Thai architect who runs his own style Instagram. He immediately links me to a music video from the Bangkok rapper Youngohm, who exclusively dons neon atrocities from the classic Hot Topic catalogue alongside a harem of spellbound women. “The more famous [this song] becomes,” says Poonsiriwong, “dragon pattern shirts [will] become more and more popular.”

It’s funny to think that dragon shirts, which were so long one of the easiest ways to get made fun of in high school, have now, officially, become an enviable part of youth culture — something I bring up to O’Connor. Does he feel betrayed that the dragon shirt adherents of today can operate without any ostracization? “No,” he quips. “I mean, I got my culture from the mall, too.”

Clair is even more diplomatic. For her, the dramatic reentry of the dragon shirt is further proof that the margins between nerd culture and pop culture are getting closer than ever. In 2019, it’s nearly impossible to mock someone for what they’re into, even if what they’re into is a gigantic gaudy dragon swooping past their belly.

“Wearing an obscure anime shirt makes you less of an outsider. When I was young, the only place to get weird anime shirts was like Hot Topic, now they’re more prevalent in other stores, meaning more people encounter them, and more people buy them,” she finishes. “I don’t believe I still have [my dragon shirts], and if I did, I doubt they’d fit. But yes, I’d wear them unabashedly.”