How Full Can I Get and Still Have a Good Workout?

There are benefits and risks to exercising on an empty stomach. But what about exercising while full? I braved a burger-and-fries-fueled workout and lived to tell the cautionary tale

Among the biggest fitness mistakes I made in the beforetimes was eating a late lunch of leftover lamb vindaloo around 4 p.m. one afternoon, then rushing to a 5:30 p.m. hot yoga class. My workout was reduced to rolling on the floor, trying not to puke, and my meat sweats were everyone’s problem.

Some food and workout blunders — like Indian food 90 minutes before farting your way into a downward dog — are more obvious than others. But I’ve also rushed to many workout sessions first thing in the morning with nothing but a Gatorade to keep me from passing out, and neither seems like a good idea. Despite being someone who exercises regularly, I admittedly have no clue what I’m supposed to eat (or how much) before working out — not to mention, how long before my workout I’m supposed to take in all of that sustenance. All I know is I’ll probably fuck it up again.

The main benefit to working out on an empty stomach is weight loss, since research suggests that exercise in a fasted state is the most effective way to burn fat. But unless you’re scheduling your workout for the first thing in the morning, it’s hard to recreate the same empty stomach later on without risking ripping someone’s head off at work in a fit of hanger (I’m truly sorry). “Most people will find that working out on an empty stomach leaves them feeling low energy or easily fatigued at the gym, meaning that they can’t put their all into the workout they’re doing,” nutritionist Kathrine Kofoed explains.

Going too hard on an empty stomach can also hinder your progress by burning muscle along with fat. “Your body naturally reserves your fat for dire situations, so your body may actually start stripping your muscle tissues for energy during that morning workout,” warns personal trainer Ashlee Van Buskirk. “And the higher intensity your workout becomes, the more energy your body will need, so it will pull sugars from anywhere it can, muscles included.”

Unsurprisingly, neither Kofoed nor Van Buskirk thinks housing a bunch of spicy lamb before hitting the home gym is a good idea, either, and experts generally recommend somewhere in the middle of these extremes. “The happy medium is having a healthy meal with fats, proteins and carbs, one to three hours before your workout, or having a small and balanced snack about 30 to 60 minutes before your workout,” Kofoed says, noting that smoothies or an apple with nut butter are great options for a balanced snack.

Depending on time of day, eggs, beans and yogurt are healthy options for protein, as well as complex carbs like oatmeal, quinoa, fruits and vegetables. “You should experiment with a variety of these foods to find your favorite mash-ups,” Van Buskirk adds. “One day you could try a Greek yogurt combo with fruit and then the next you could fuel your workout with some eggs, spinach and toast.”

In the spirit of experimentation (and pure arrogance), I decided to run the food gamut with an hour-long workout pulled from my colleagues’ favorite YouTube videos: a 10-minute barre warmup, 30-minute HIIT session, 8-minute abs and a 12-minute dog walk to cool down, attempted on either a smoothie; a big ass salad; a burger, fries and shake; or of course, nothing at all. And while I avoided the embarrassment of doing it in public this time, I can assure you that the results weren’t pretty. 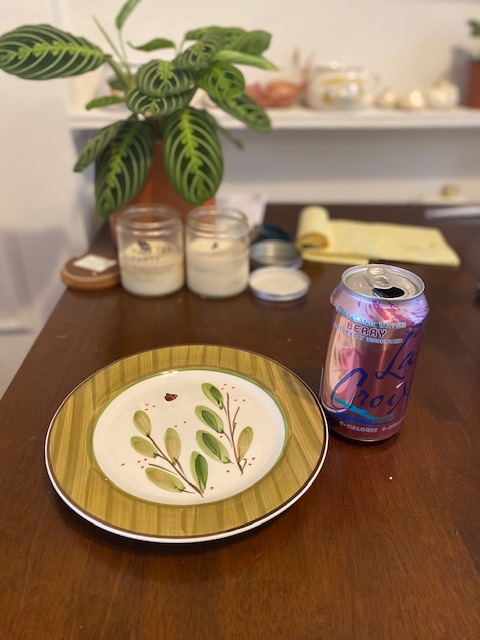 I rolled out of bed on a Saturday and handed my dog a Kong full of peanut butter to keep her occupied while I got jacked, and grabbed a seltzer for myself. Out of the gate, my workout was like most early morning workouts where I’m groggy, wobbly and not at full operating capacity, but the upside was that I wasn’t fully awake enough to register that I was exercising. On top of that, I was getting my workout out of the way early so I could focus on being ravenously hungry the rest of the day.

That’s always been my problem with working out on an empty stomach. Sure, I’m more focused throughout the day, but I end up directing all of that intensity to hunting and gathering snacks. And as much as I like to eat, I don’t want to waste all the mental benefits of working out on being obsessed with food (this would’ve been extra annoying to deal with on a weekday). Plus, the workout itself was admittedly too much without any fuel. By the time I was done with the abs portion, I barely had enough energy to get my snow boots on, which is its own workout with sturdy Midwest calves like mine. Overall, I give working out on an empty stomach three and a half flexes out of five. 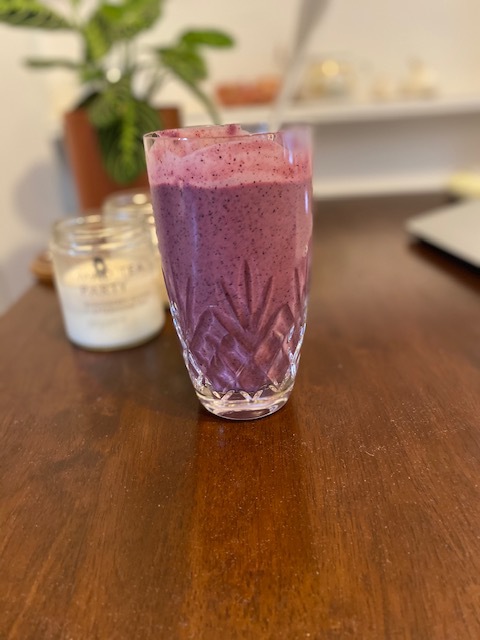 Per Kofoed’s recommendation, I blended up a smoothie with frozen blueberries, strawberries, mango, spinach, Greek yogurt, almond milk and some peanut butter (because it was there), and waited 30 minutes before starting my workout. As expected, I immediately felt more dialed into the workout than with an empty stomach. My energy level was higher, which led to better focus and form, even after switching up the HIIT workout for variety. Afterwards, I had more energy and wasn’t daydreaming about takeout all day. I didn’t think the experts would be wrong, but I was still comforted to confirm that their recommendations checked out. I give it five flexes. 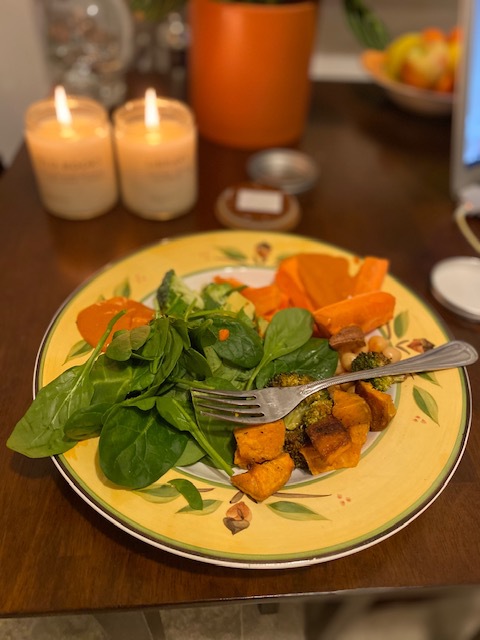 I wanted to see how a stomach full of salad would work out, and made a plate of fresh spinach, garbanzo beans, carrots, raw broccoli, roasted broccoli and sweet potatoes, all with a homemade chipotle vinaigrette, because I’ve missed it from those power lunch salad chains that I cannot find at the store. As someone who loves a colorful plate of plants, I was proud of this meal and waited about an hour to let it settle before diving into my workout.

The first thing I noticed was the difference in the time of day. Since I tend only to graze throughout the morning and afternoon, by working out after a meal, I was bumping my physical activity to the evening. As a result, it was hard to tell if I was being weighed down by the meal or the day, but halfway into my HIIT workout, I could only blame all the burping on the food. Salad is surprisingly acidic, especially when your dressing is made with chipotle peppers and adobo sauce blended with lime juice. By the end of the dog walk, I didn’t feel like I had a good workout so much as I ruined one of my favorite healthy meals by not letting it settle. Three flexes. 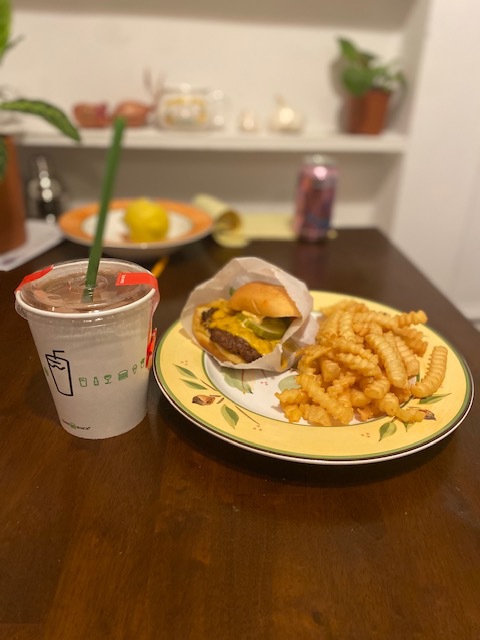 All of my friends said the same thing: “Lauren, no one needs you to prove that eating a burger, fries and chocolate shake before working out is a bad idea.” But I welcomed the challenge (and the excuse to eat my favorite shame meal from Shake Shack). As if the universe was trying to tell me how bad of an idea this was, my delivery was over an hour late. As I ate the microwaved burger and fries and sipped on a room temperature milkshake, I contemplated jumping ship or pivoting to a more palatable bad idea, like lasagna. But then I thought about all the food-workout mistakes I’d likely make in the real world and it all tracked.

By the time I choked it down and waited the requisite hour-long grace period, I was starting my workout at 9:30 p.m., ridiculously late even by quarantine standards. I was just as gassy as with a stomach full of salad, but these were more precarious burps, loaded with agita and regret. My form was what you’d expect from someone who has given up every fitness goal other than not throwing up. If not puking in and of itself was a victory, then I can say I won.

Although I wouldn’t do it again on purpose, I can say that the meal itself was so regrettable that the only thing that would’ve been worse would’ve been to sit and wallow after eating it. Working out wasn’t so bad comparatively, but a brisk walk obviously would have been the better option. I give it two and a half flexes.

Perhaps my friends are right and this is a lesson no one needed. But at least I’m one step closer to being the fittest person to get gout.