Adidas has been dreaming about sex for over 40 years, Fords have been ‘Fixed Or Repaired Daily’ for 60. Even Spam has a backronym, dating from WWII. But are any of them real?

As a kid, the sneakers I usually got were ones found in the clearance section of a nearby outlet mall. Generally they were Nikes, but every now and again, another brand would have the right price tag and my mom would buy those instead. Most of the Nikes all blended together over the years, but I distinctly remember a pair of white Adidas I got as an early teen — not because they were especially cool or comfortable or anything like that, but because I recall a fellow middle-schooler telling me what exactly those six letters meant: “All Day I Dream About Sex.”

Technically, the name for this kind of thing isn’t an acronym, it’s a “backronym” (or “bacronym”). While not recognized as a “real word” by several of the big dictionaries, a backronym — as I prefer to spell it — is when people reverse-engineer an acronym out of a preexisting word. You find this kind of thing in legislation a lot of the time — like the PATRIOT Act, for example — or, if you’ve heard Gary Busey talk at all over the last 20 years, he was probably making up a backronym out of someone’s name or some random word. My favorite example of a backronym, though, was in The Office, when Dwight engineered one out of his name in preparation for a performance review.

Guys like Busey, Dwight Schrute and many American politicians might seem better tapped into the part of the human brain where backronyms are formed, but word games like this aren’t at all uncommon. People particularly seem to like to do it with brand names, especially when brands don’t use an established word as their namesake. So, in an attempt to better understand that “Gary Busey” part of our brains, here are a few of the most common made-up brand backronyms, and what I could find out about their origin…

Adidas: ‘All Day I Dream About Sex’

Though “all day I dream about sex,” “all day I dream about sports” and “all day I dream about soccer” have all been attributed to Adidas, the origins of the brand name actually link back to the name of the company’s founder. Adolf Dassler was a German shoemaker who began a business repairing shoes in post-World War I Germany. Later on, the “Dassler Brothers Sports Shoe Factory” would supply sports shoes to the Hitler youth and German olympians, but after World War II, Dassler had to find a new, Nazi-free image. He combined his nickname — “Adi” — with the first three letters of his last name.

“Adidas,” however, would prove to be such a curious collection of letters that bogus acronyms would eventually be formed around it. The earliest instance I could find of one was from 1978 — some 30 years after the name originated — but these jokes likely started earlier, in the halls of middle schools in the early-to-mid 1970s and perhaps even before. As for that 1978 instance, it came about from popular San Francisco newspaper columnist Herb Caen, who, on March 10, 1978, wrote, “As you joggers and jigglers know, the No. 1 warmup suit is Adidas — a word that, a nine-year-old girl confided the other day, stands for ‘All day I dream about sex.’ Nine!” The nine-year-old girl Caen was referring to is likely a joke or something that’s entirely lost to history, but Caen was a popular, nationally-syndicated columnist, so it makes sense that he at least popularized the rumor of what Adidas “really” stood for.

The next-oldest instance I found was from May 1981, when a columnist in The Philadelphia Enquirer related a story from a party where people were debating what Adidas really stood for. One man said it was “all day I dream about sex,” and another person thought “all day I dream about sports” made more sense and, apparently, this conversation was interesting enough for columnist Art Carey to relay it in a newspaper. After this, instances of “what does Adidas stand for” seemed to become much more popular, as more examples of “all day I dream about sex” appeared in other newspapers. By that fall, the joke had become so widespread that a Canadian sporting goods store used the acronym to announce that it was now carrying Adidas products. And, in 1997, the Adidas company itself used a variation of the acronym when an American Adidas executive joked that Adidas stood for “all day I dream about soccer,” in the leadup to an Adidas-sponsored FIFA tournament. 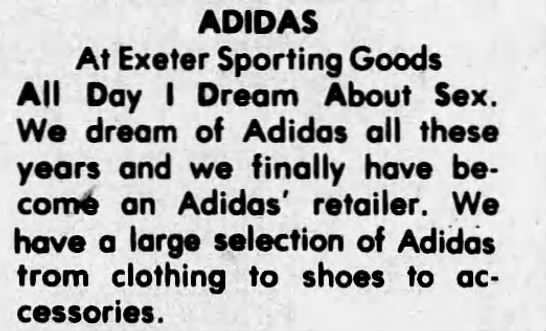 1997 was probably around the same time that I first heard about that “sex” acronym, but I doubt that was because my friends were big Herb Caen archivists. Instead, it was likely because the Korn song “A.D.I.D.A.S.” — which was all about that acronym — had come out just that year. Korn were huge at the time, so this song once again popularized the backronym for a new generation of juveniles to snicker about.

Admittedly, Ford’s made-up backronym “fixed or repaired daily” doesn’t quite have the same salacious ring that would make it fodder for pre-teens, but the derisive joke has been around a lot longer. The earliest instance I found was from a classified ad from 1962, when someone posted this ad: 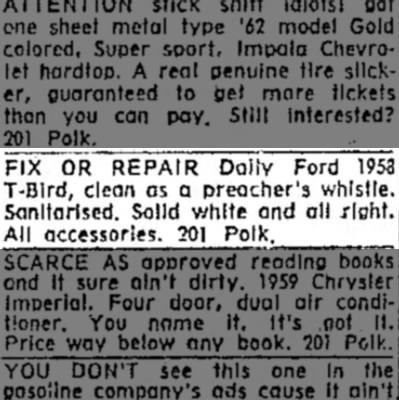 Whether or not insulting the product they were trying to sell proved to be an effective sales strategy is unknown, but that Thunderbird was also touted as being “clean as a preacher’s whistle,” so perhaps it sold after all.

Other instances of this backronym being used begin to occur around the same time, particularly by car dealers trying to sell people on buying a new car (which, curiously enough, often tended to be Fords as well). The context by which this backronym is being used suggests that the joke is already pretty well-known or that it was an unaffiliated expression at first, which was later applied to Fords. Either way, it would be latched onto Fords by 1968, so it likely was associated with them much earlier. 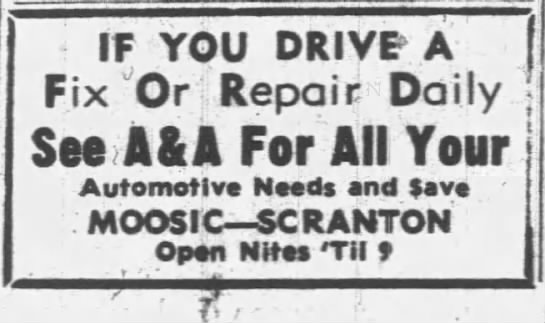 For whatever reason, though the Ford backronym seems to be the oldest and most popular, just about every car company has had made-up meaning applied to their brands. Examples of this include Fiat’s “Fix It Again, Tony,” and BMW’s “Big Money Waster,” though none seem to have quite the same ring as that long-lasting dig at Ford.

Like Adidas, Spam is actually a conjunction of word parts instead of an acronym (what’s called a “portmanteau”). Being that I used to work in a deli, I can tell you that “spiced ham” is a crappy, cheap-as-fuck ham that’s made out of whatever pig scraps were deemed unworthy of the more expensively-priced processed pork, and Spam is indeed a spiced ham (which is where the canned meat got its name).

Due to the product’s catchy name and unique nature, Spam has always been ripe for parody, as it’s been the subject of several Monty Python-related comedy sketches, as well as a Weird Al Yankovic song and, unsurprisingly, several backronyms. “Something posing as meat” dates back to at least the 1990s, but during World War II — when canned foods were needed for soldiers — Spam received the nickname “Special Processed American Meat” from our allies in the U.K.

This one dates back to at least the year 2000 but, like most of these, it probably began a lot earlier. But unlike the rest here, NASCAR is an actual acronym, as it really stands for National Association for Stock Car Auto Racing. The joke that NASCAR is a “Non-Athletic Sport” is a bit unfair, as a 2017 piece in USA Today explained, “During a race, drivers spend hours actively fighting the G-forces from 200-mile an hour speeds in 130 to 160-degree heat… To survive these conditions nearly every weekend from February through November, drivers have to be in shape.” As to whether or not NASCAR is “centered around rednecks,” that’s, well, somewhat harder to disprove.

Bing: ‘Because It’s Not Google’

Microsoft’s answer to Google was announced in May 2009 and almost from the get-go, people came up with the joke that it stands for “because it’s not Google.” Microsoft has explained in the past that the name came about because they, “needed a brand that was as fresh and new as our approach. It needed to be like the product — optimized for the internet. A name that was memorable, short, easy to spell and that would function well as a URL around the world.”

From what I could find, Microsoft has never addressed the “because it’s not Google” or “Bing is not Google” joke; but at first, they may have liked the comparison, since they were trying to tout how the product was superior to other search engines. A decade later though, Bing only represents six percent of internet searches, versus Google’s 83 percent. And while Google may be an over-blown, omnipresent, Big-Brother-esque, soon-to-be-mind-control-device, it’s still the preferred search engine for most people, whether they’re looking up old Weird Al Yankovic songs, decades-old used car listings or the Nazi origins of a very popular shoe company.