Doctor Manhattan Has the Most Debated Dick in Fandom

Average or a hefty hog? Circumcised or not? And why the hell can't we look away?

Watchmen, the 12-issue comic book series collected in a 1987 graphic novel, was jarring by design. It took place in an alternate reality where America won the war in Vietnam, Richard Nixon never left office and only one member of a “superhero” ensemble had any appreciable superpowers. This would be Dr. Jon Osterman, better known as Doctor Manhattan, an atomic physicist who becomes an immortal demigod after a lab accident, able to manipulate matter at will. Due to his transcendent consciousness, Jon grows increasingly detached from the concerns of the human species, and rarely does he give a fuck about one of our main hang-ups: nudity.

So among the various moments of shock in reading Watchmen is Manhattan’s first major entrance. 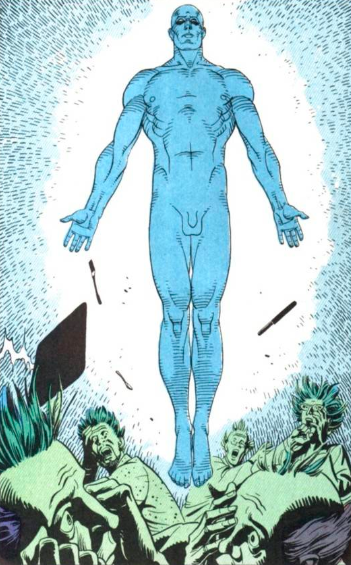 Yeah, he’s blue, and he’s got his dick out. Just vibing. What does an omnipotent dude need clothes for? Exactly.

But since this stark, fluorescent male nudity was a game-changer within the medium, Watchmen co-creators Alan Moore (writer) and Dave Gibbons (artist) had to be crafty about it. Gibbons noted that the junk is actually introduced in a muted scene of Manhattan wandering the desert alone. “I was careful to give him understated genitals, like a piece of classical sculpture,” he said in a later interview. “I’m sure some people didn’t even notice he was nude for a page or two, and by then, it was too late!”

Moore recalled being unsure whether DC Comics would let them get away with the choice; it ultimately worked because it “looks so innocent,” he explained: “If you make it coy, then it looks weird, but if he’s just walking around stark naked and nobody’s taking any notice of it, then somehow it does look really innocent. We’ve got male full-frontal nudity in issues No. 3 and No. 4, and you don’t even notice it, really. It’s there, but so what, it’s really casual.”

But, of course, people did notice. Boy, did they ever. 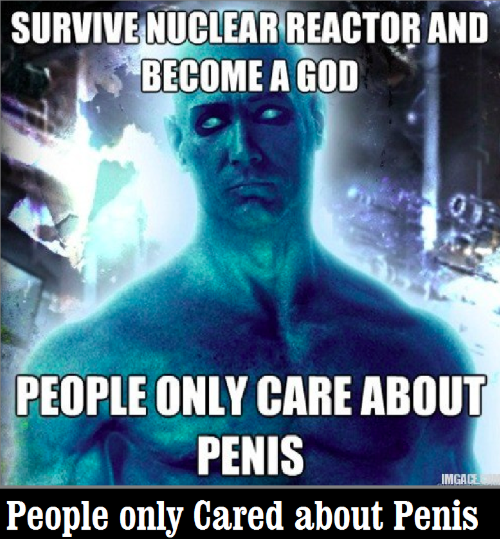 In retrospect, it’s only too funny that Gibbons and Moore went for the de-emphasized dong, their nod to the statues of antiquity an apt choice for the brainy, sober Doctor Manhattan, given that the Greeks prized a small penis as symbolic of intelligence, reason and idealized balance. No matter how gritty and grown-up your comic book is, its audience is unlikely to resist their juvenile amusement at a guy who is permitted to expose himself to friends and coworkers at all times — who, moreover, has the ability to shape-shift but has not, from what we can tell, meaningfully altered his minor manhood. (Perhaps, too, he’s that shade of blue from participating in No Nut November?)

Doctor Manhattan’s mastery over the elements of the universe is so awesome, even in the superhero context, as to force us back to irrelevant factors of his being, that dick certainly included. This focus has irritated more than a few fans who take the franchise quite seriously. “If Doctor Manhattan can alter his basic appearance in any way, why doesn’t he have a bigger penis?” a redditor asked several years ago, drawing angry replies.

“Maybe if you, you know, achieve complete transcendence over the restrictions posed by physical reality, the size of your dick doesn’t really cross your mind as much any more?” was the top comment. “Why the hell are you reading the Watchmen if all you want to think about the characters’ dicks?” another redditor raged.

And yet, once we’ve understood Manhattan’s indifference to the particulars of his own member, we’re stuck with the question of why he has held on to it while shedding most of his recognizably human exterior — apart from that ripped bod, anyway. I’d guess that his stubbornly masculine figure and free-swinging package are lingering concessions to his now obsolete identity, and to his increasingly estranged lover, Laurie Juspeczyk, aka Silk Spectre. If the dick is underwhelming, that’s probably to keep it out of the way during his complicated experiments. Oh, and I guess he makes it float when he meditates in mid-air to prevent unsightly dangling. 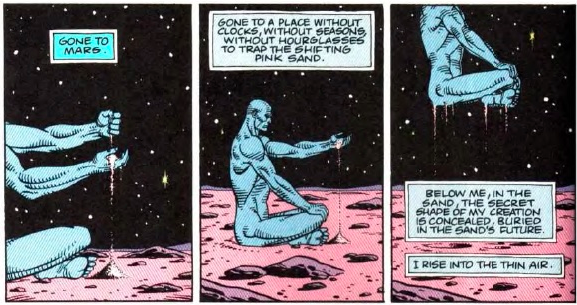 These dick logistics (logisdicks?) are, however, blown to smithereens by the 2009 film adaptation of Watchmen, directed by Zack Snyder. Before it premiered, we learned that the movie’s Doctor Manhattan, portrayed by Billy Crudup, had a rather larger penis, made all the more impressive by the dimensions of the screens it appeared on. That sacrilege was overshadowed by Snyder’s decision to reverse the ending of the graphic novel, and yet, it stung all the same: Not only was Manhattan now “hung like a horse,” he was circumcised.

Eddie Campbell, who collaborated with Alan Moore on the 1999 Jack the Ripper graphic novel From Hell, voiced his disapproval in a blog post, arguing that Manhattan was uncut and based on Da Vinci’s Vitruvian Man, a Renaissance drawing in the classical model to which Gibbons alludes. “The circumcision is therefore another slice of American baloney,” Campbell wrote. “To suggest that [Manhattan] made himself thus because, faced with unlimited choices, he chose that which was fashionable (a justification I have just read on a discussion forum), is to turn a sophisticated idea into a commonplace one. Man imitates the gods after all, not the other way around.” 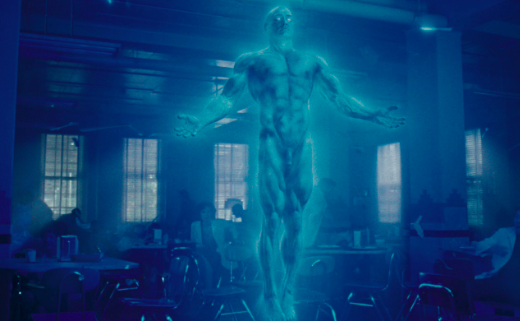 Knowing that Doctor Manhattan essentially remade himself from scratch after he was torn asunder in a particle test, it does seem odd that he’d forgo the foreskin. Campbell’s insinuation of studio meddling is a plausible basis for this, as well as the movie Manhattan’s “beefcake” physique. And it’s sensible to suppose that a lengthier shaft was judged less distracting than a modest one, which was likely to prompt giggles rather than salacious buzz — in Hollywood, the little cocks are for comedy, while the hefty hogs signal true drama.

Still, we are left to wonder why Manhattan, dispensing with his animal nature, didn’t opt for the Ken Doll crotch. Did he give himself a radiant wang to make it doubly clear that he was no longer bound by the conventions of pathetic earthlings?

At least in the world of comic book censorship, that appears to be the case. Last year, DC chose to blur a shadowy dick belonging to Bruce Wayne, i.e., Batman, in the digital version of Damned #1, published by the brand’s “mature” label, after the titillating panel went viral online. But a Watchmen spinoff called Doomsday Clock, run by the regular DC line, showed the privileged Manhattan in the buff, and in front of Superman, no less. Because flapping his frank and beans in our faces is essential to his persona. Elsewhere, the newer comics covered him up; it never went over well.

It was, in fact, the show’s second reference to the ol’ glowstick thus far; in Episode Two, for the performance of a bizarre stage play about Manhattan, the lead is made to paint his substantial plonker the appropriate hue. If the sex toy reveal in the next episode struck more of a chord, that’s down to the object’s sheer mass, its Jeff Koons-inspired design and the strong implication that while Laurie had abandoned the distant Manhattan to shack up with the sensitive Nite Owl in the original comic, she eventually came to pine for her ex in a messy fashion.

It’s a wild climax for the saga of Doctor Manhattan’s penis, this thing that has swollen from a subtly risqué detail to an 18-inch, maximum horny visual gag. The very aspect we were meant to overlook turned into a point of fascination, then a defining attribute. The bind this has placed fans in is nothing short of ridiculous, and says something toward the nature of fandom at large: Anyone who cares about Watchmen has to care about the reconstituted dick of the deity driving the plot. They can try to evade this burden with ironic and irreverent posturing, but it doesn’t change the fact that deep down, they really do give a shit about the presentation of a superhero’s tackle, its dubious necessity and its relative or metaphorical significance to anyone who has, um, encountered it.

Reducing the post-human Doctor Manhattan to a sleek fuck-rod simply reminds us that the constant rebooting of popular characters is a business that relies on synecdoche. Others are swiftly identified by their weaponry or costume, and Manhattan, a weapon himself with no costume, can only be associated with incongruous nakedness. At a Watchmen erotica competition a few years ago, the crowd was heard to chant, “Big blue dick! Big blue dick!”

True, they were there for smut, but they happened to affirm what I think the typical Watchmen reader feels: that god is kind of a bore unless he’s letting it all hang out. 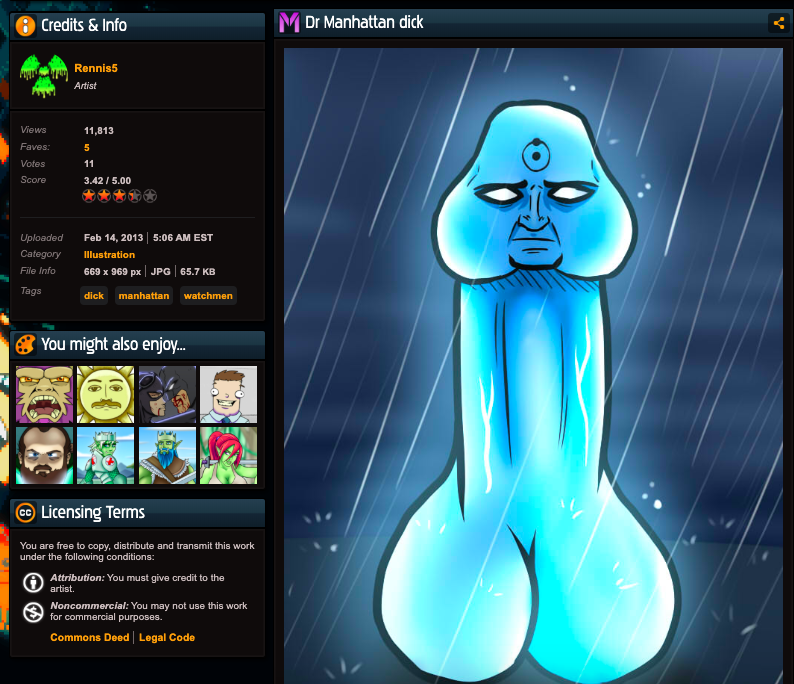