Can We Talk About Vince Vaughn’s Bolo Tie Problem?

The crime thriller ‘Arkansas’ is a fantastic entrée into the rich, diverse culture of classic Western menswear. Unfortunately, star Vince Vaughn is wearing it all wrong

In the 2020 crime thriller Arkansas, Vince Vaughn’s character, Frog, wears at least 15 bolo ties during his roughly 40 minutes of screen time. That’s a bolo change every two minutes and 40 seconds — likely the fastest succession of bolos ever seen on film.

But there’s a hitch: Vaughn is wearing them wrong. The poor dude from Swingers unknowingly jumped into an obsessive corner of male fashion — and he broke some of bolo culture’s basic rules in the process. 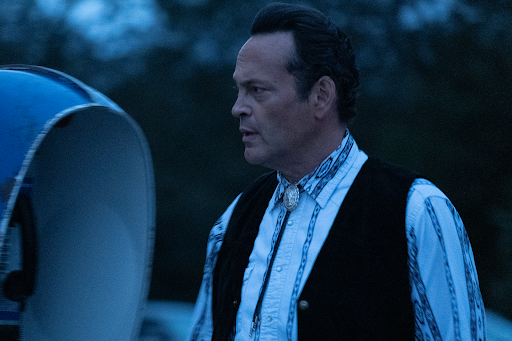 Before we break down what seems like a super-niche movie detail, let’s back up for a minute for some Bolo 101. The bolo (also called bola, or Western) tie is an under-appreciated, highly customizable alternative to men’s classic neckties or bow ties. It was founded in the West, and it’s stayed most popular there, becoming the state necktie of Texas, Arizona and New Mexico. The bolo consists of a braided leather cord around the neck, usually capped off with metal tips and held together by a clasp. The clasp is where the fun begins. Anything can be glued to the clasp, from Boulder opals wrapped in wire to union pins — I’ve seen both and tons in between. Bolos are democratizing in their ability to be adapted, remixed and built from the ground up by anyone with glue, a clasp and a cord, in any variety of styles.

It is a world of truly miraculous bolo options. Naturally then, guys who are into bolos are, well, really into bolos. Case in point: Norman L. Sandfield, a bolo collector and historian. Each morning, Sandfield looks through roughly 500 bolos on eBay, searching for an exceptional one.

I once met and photographed a guy named Dog Valley Dick who made a bolo out of gold, stones and a walrus tusk he and his friends gathered over years. He capped the bolo cords with claws he pulled from a particularly annoying bear that lived near his home. 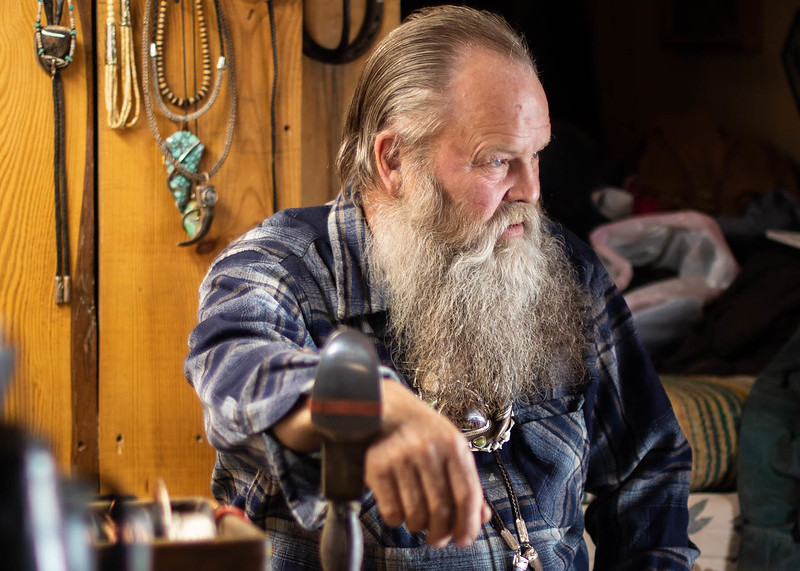 Classic neckties simply can’t compete with the raw outdoorsmanship and masculinity that define the bolo. They connect their wearers to the West’s male-dominated old-time industries like cattle ranching and ore mining — both symbolically and physically. The ability to inlay stones into a bolo connects collectors to the vibrant subculture of miners, treasure hunters and lapidary artists who provide them.

With such variety out there, Vince Vaughn’s amateur bolo game sticks out like a frayed leather cord. The problem? At 6-foot-5, he’s a big-ass dude. And so, his cords are just too damn short.

The tips of a bolo should hang a few inches below the breastbone, which usually translates to a 36-inch bolo for someone under six feet. Arkansas costume designer Ashley Heathcock tells me why this wasn’t the case for Vaughn: She bought and rented bolos for an average-height person without switching the cords for someone she admits is “very long, you know.” Sometimes then, Vaughn’s cords are uneven lengths as well — a big bolo no-no.

“Length of the cord is a matter of taste, but these look too short to me,” confirms Steve Balog, owner of bolo supply store Rocky Mountain Western.

In the context of the film, some of these costume decisions make sense. His bolos are actually clever symbolic choices to mark his character development. Frog is a slick, monologuing boss of the Dixie mafia underworld who starts the film as a pawn shop owner selling bootlegged tapes before slowly working his way up to semi-retired drug lord. He starts in the 1980s with little but elbow grease and a seemingly endless array of neon Aztec-print Western shirts. In these 1980s flashbacks, Vaughn’s bolo ties are tacky, embarrassing byproducts of the decade’s bolo craze — arrowheads with worthless inset minerals or a fake-gold eagle. (If you ever see me wearing a tacky 1980s bolo like his, slap it off my neck.)

The bolos Frog wears take a similar journey to his rise in the underworld, starting small and low-qual before expanding to gorgeous turquoise-in-silver inlays and even a bolo tie made from a silver-coated desert cottontail bunny skull. Heathcock tells me that the bolo’s skull was actually repurposed ape jewelry from the set of Dawn of the Planet of the Apes, making it the first known cross-species bolo tie.

Another detail that reveals Vaughn’s bolo immaturity? He doesn’t focus on cord tips as much as most collectors. Collectors and crafters often use tapered metal, Hogan-style, porcelain and animal horn tips. Vaughn’s cords, however, are tipped with small ribbed tips, essentially the Two-Buck Chuck of the bolo world. I expected better: It’s like seeing a senior executive riding a tricycle into a boardroom.

At the end of the film — spoiler alert! — Vaughn dresses in his most stylish outfit (featuring the skull bolo statement piece) before he’s shot by Liam Hemsworth. Frog falls forward, dying but also probably crushing that beautiful bolo tie. I believe this is a lesson: Wear as many flamboyant tie choices and combos as you can, whenever you feel like it. You never know when you’re going to perish, via a Hemsworth brother or another, more likely cause.

Should you try to wear bolos?

Yes! Especially since jewelry options “for men” tend to be more limited. I recommend people do the opposite of Vaughn’s character and go hard on weird bolos early, customize your cord length if you’re tall or have a wider neck, and experiment with all aspects of the tie — like the cord material, color and tips. Overall, however, I’m glad that Vaughn pulls off the gangster look in Arkansas better than his last try, in True Detective — alongside, of course, bolo-wearing Colin Farrell.

Do I have opinions of Farrell’s bolos? You betcha. But that’s for next time.