Figuring out how to use social media as a popular musician is no easy trick. That’s why many bands stick to official business — announcing new albums and tour dates, thanking fans and celebrating success on the charts. Solo artists are free to mix it up a bit: If you follow indie rocker Phoebe Bridgers or rap queen Cardi B, you’ll get a good dose of their humor and attitude. (Adele had to log off after too many drunken tweetstorms.) At least one group, Smash Mouth, has transcended online corniness to become legends of the realm, clowning on DJ Khaled for denying his wife oral sex and telling organizers of a “straight pride” parade to fuck off.

But in the mid-1990s, when Smash Mouth was forming in San Jose, California, some middle school kids from the nearby suburb of Los Gatos were starting their own band. No one back then could have known that they were destined to have a major hit, “Headstrong,” in the early aughts. Less foreseeable was that the group would still be active 25 years later, hindered only by increasingly dismal record sales and a frontman addicted to tweeting radioactively right-wing garbage, then fighting everyone in his replies: Chris Taylor Brown of the butt-metal outfit Trapt.

Brown had been beefing and making internet enemies since at least 2015, when his Facebook screed about Keeping Up With the Kardashians devolved into homophobic and transphobic commentary. Then, with the rise of Trump, he went full #MAGA, with all the shitposting that entails. By the 2019 anniversary of 9/11, he was spewing racist hate toward Rep. Ilhan Omar, and as of February 2020, he continued to defend the white supremacists responsible for the deadly Charlottesville “Unite the Right” rally in 2017.

Fittingly enough, however, Brown — always flinging his toxic takes from the official, verified Trapt accounts — didn’t enter his supernova phase until March, right as the first coronavirus lockdowns went into effect. What flipped the switch was an angry crusade against Talbert Swan, a bishop and civil rights activist, and Captain America actor Chris Evans. In the first 48 hours of this battle, Brown would fire off a staggering 900 tweets, drawing ever more hecklers to spar with as he denounced the “victim mentality” of social justice movements and praised Trump’s handling of the “Chinese virus.” This lunacy continued for an entire week, and, by any honest accounting, the rest of the year.

Brown didn’t seem to realize that his constant engagement, hair-trigger temper, fascist politics and washed-up rock star persona had put him in an impossible position: It was far too easy for the “trolls” to push his buttons, and whenever he tried to hit back, it encouraged them to continue.

The flood of negative attention also led to mockery from other metal bands and musicians. People started a rumor that Brown had once pooped his pants on stage. Someone claimed to have been on Trapt’s tour bus while they snorted lines of cocaine and whined about how they couldn’t get laid. Reality wasn’t much kinder than the jokes. In July, Trapt put out an eighth record, Shadow Work, promising their best work to date, “probably one of the top 5 albums that will ever exist for all of time.” It sold a pitiful 600 copies upon release, an 87 percent drop-off from the previous album, 2016’s DNA, which had been their worst-performing until this one.

Amid this career collapse, Brown was taking Ls every day on Twitter. He repeatedly and unsuccessfully threatened a Trapt parody account with legal action. He went after beloved rapper Ice T, who with brutal candor informed him that he was a nobody. (Later, Ice rubbed salt in the wound by commenting that he wouldn’t initiate physical combat with Brown because “I don’t want to hurt the guy.”) An artist who had designed two of Trapt’s album covers went public with a small claims suit for $4,000 he said the band owed him, which caused a CBS producer to suggest they settle the matter on Judge Judy. Petitions went around to keep Trapt’s music off the newly remastered Tony Hawk’s Pro Skater video games… even though they’d never been on those soundtracks in the first place. Trapt played a poorly-attended set at the Sturgis Motorcycle Rally, prompting a defense of their crowd size that echoed Trump’s lies around the attendance for his 2017 inauguration; next they had a Dallas show canceled thanks to “social justice warriors” who contacted the venue, per the irate tweets that followed from Brown.

The humiliation was acute and unremitting, fueled by Brown’s need to vent every last one of his vile opinions with sneering arrogance: that racism isn’t real, George Floyd was responsible for his own murder at the hands of police, Dr. Fauci is an agent of the “Deep State” and COVID-19 is nothing more than a liberal plot to brainwash the masses into obedience. He had a remarkable knack for being wrong or misinformed on any issue — and just getting louder as a result. 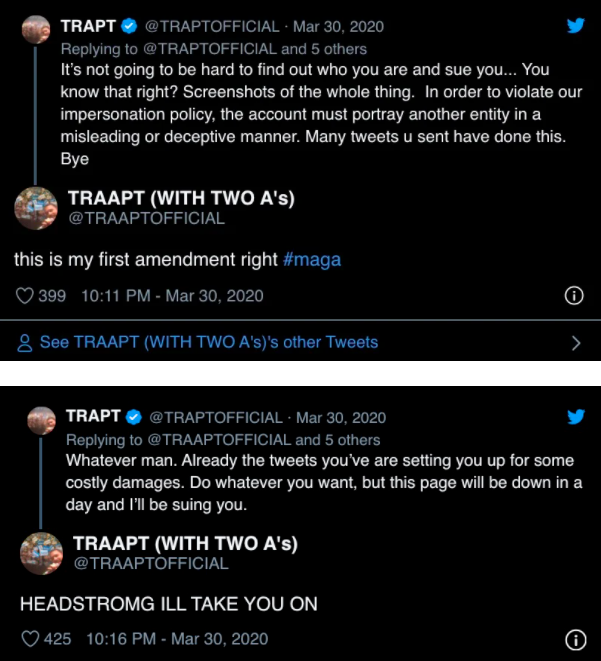 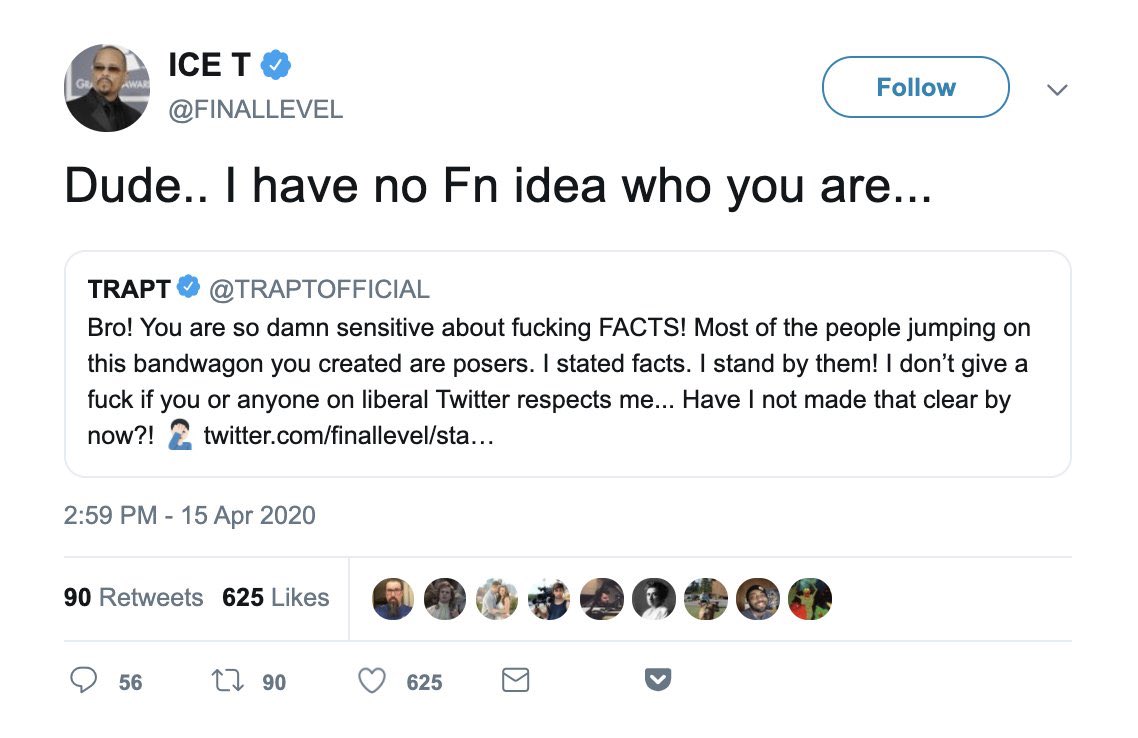 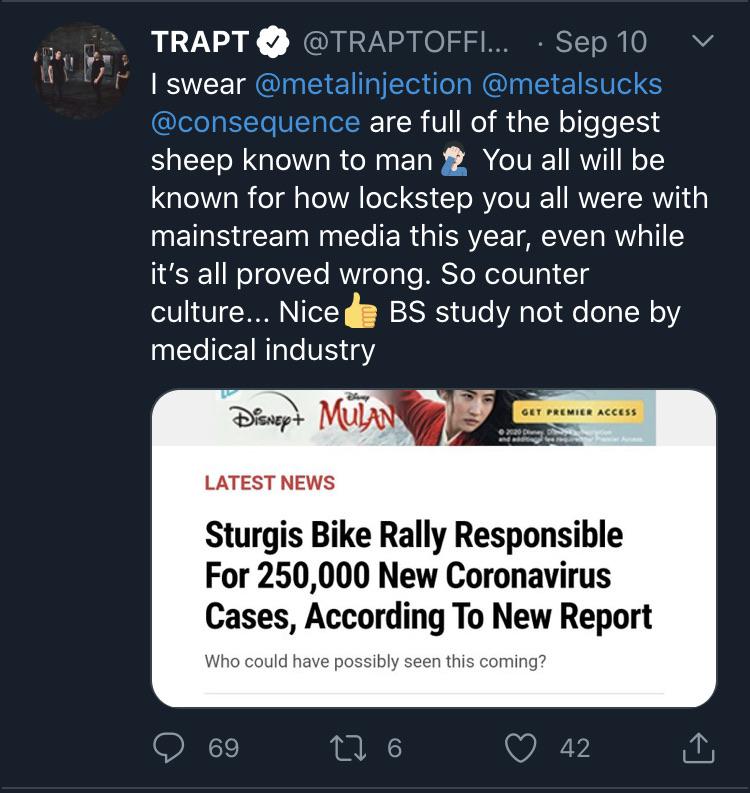 Even on a platform renowned for assholes imploding in spectacular fashion, Chris Taylor Brown was a singular self-destructive maniac in 2020. That a band whose claim to fame was almost two decades behind it should claw its way back to notoriety through the sheer bitterness of its lead singer, who kept up his loathsome ranting for a year and lashed out at literally any low-follower anon who took five seconds to dunk on him, is a Twitter saga without compare.

And, like the natural showman he is, Taylor wrapped up this mythic performance with an astonishing three-part encore beyond what any of us imagined. It began with Trapt’s Facebook and Instagram accounts being deleted in mid-November, apparently over Taylor sharing content related to the Proud Boys, a far-right extremist men’s group in which he previously claimed membership. Taylor announced that the Facebook page — some 600,000 subscribers strong — had run afoul of hate speech guidelines, and that he planned to sue the company. Weeks later, he managed to escalate the drama on Twitter by denying the reality of statutory rape and insisting that a 15-year-old boy having sex with a 25-year-old woman is “not pedophilia.” Either for this fresh outrage or accumulated offenses, Trapt was served with a lifetime Twitter ban. 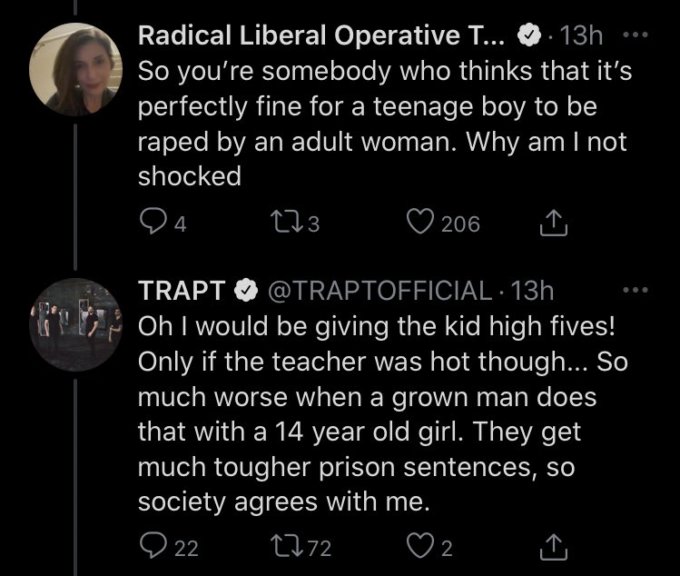 Yet one last indignity remained, and it would unfold in the bowels of Parler, a Twitter clone favored by Trump loyalists who’ve found themselves temporarily suspended or finally kicked off the original app for any number of rule violations. Someone with the Parler handle @TraptParler posted a notice that the rest of the band had fired Taylor over his views and hoped that fans would give them another chance.

This announcement was met with a jeering reply from @CTBTrapt in which a user posing as Taylor called Trapt “pussies” and said he would be moving on as a solo act. Neither account was authentic, but the exchange got picked up and amplified on Twitter, with Taylor unable to counter the misleading screenshots on the site after his banning. Instead, he was stuck raging on his actual Parler account over incorrect headlines reporting his split with Trapt. Before anyone got the story straight, the legend took over. 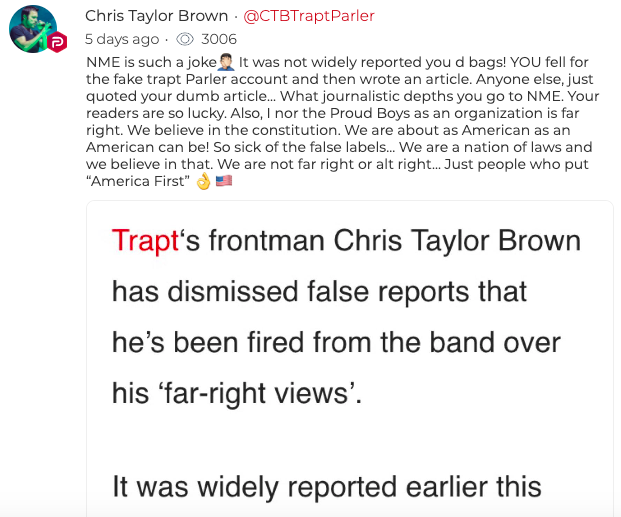 In fact, Taylor remains very much a part of Trapt — though who knows how many have come to believe that his pals threw him overboard. He now occupies the hell of both outcomes: ridiculed for the betrayal that didn’t happen, but doomed to continue in the lifelong musical project that has hit rock bottom under the weight of his ego and white nationalism. Meanwhile, he’s free to voice his disgust with everyone who isn’t Trump or a part of MAGA nation on a social network where few will see it and almost none will disagree with him.

You might think this is the end for Taylor — one that comes alongside electoral defeat for the president he so adores — and certainly his exile from the mainstream discourse will turn the page on the 2020 Trapt Meltdown Marathon. This lengthy episode joins the pantheon of “extremely mad online” with highest distinction.

Though, as with Trump, you understand that it isn’t quite over, and we haven’t heard the last from either man. Maybe Trapt can play the virtual “second inauguration” some are planning for the outgoing chief executive. Plus, if we get the pandemic under control, they’ll have the chance to tour again, settle old scores and build another fanbase. Anything can happen out on the road.