The Would-Be Dads of Phantom Pregnancies

What happens when your significant other, despite all medical evidence to the contrary, believes she’s still going to have a baby?

Jeff remembers the day his fiancée told him she was pregnant. It should have marked the beginning of an exciting new chapter in life, but instead, things were about to turn very dark. “We weren’t supposed to be able to conceive,” the 30-year-old Texan tells me. “But one day, I came home and was greeted with three positive pregnancy tests. Prior to getting chemotherapy for lymphoma, my fiancée had her ovaries harvested and frozen, and despite all odds, it was a success, confirmed by several doctors and ultrasounds. It was kind of a miracle pregnancy.”

They, however, lost the pregnancy at seven months. “I was a wreck for weeks,” he says. “But it became clear that she didn’t register what had happened. She was chipper. She asserted that she was still pregnant and that the miscarriage didn’t happen.”

At first, Jeff supported his fiancée. Physically, she still appeared pregnant, and a part of him wanted to believe her. But when the days turned into weeks, it was clear she was experiencing what’s called a “phantom pregnancy,” also known as pseudocyesis, where a person experiences all the physical signs of a pregnancy, minus the baby.

Though phantom pregnancies have been recorded as far back as 300 B.C., they’re still extremely rare, occurring in about “1 to 6 in every 22,000 births,” according to the New York Times. As for why the delusion of being pregnant can prove so strong, Claudia Luiz, a psychoanalyst in New York, says the reasons are varied, but obviously very pervasive, especially if the person has suffered considerable trauma. “Treating patients who need to carry false stories about their life to defend against breakdown, I’ve discovered that there’s usually a damn good reason for that story,” Luiz explains. In terms of specific reasons for phantom pregnancies, she adds, “It can be to feel like you’re nourishing a life inside of you, which gives your life purpose; or perhaps it can help keep a man as you might be bonded by your (imagined) combined DNA.”

In Jeff’s case, things only continued to get worse. “Eventually it wasn’t her just telling me what she thought, she began telling other people she was still pregnant, which was humiliating. I didn’t know what she was going to say about her 12-month pregnancy, or how people would react,” he says. “She’d tell people she still felt kicks, had bloody mucilage and had been talking with a midwife who’d seen this kind of thing all the time.”

The couple visited five specialists to confirm whether she was still pregnant, but all five “ran ultrasounds and hormone and urine tests that disconfirmed the possibility.” His fiancée, however, “dismissed those results as quackery.” Similarly, she “wrote off any further clinical testing and the medical community as a whole.” Instead, she began researching medical phenomenons that might explain her symptoms, such as cryptic pregnancies, where a woman isn’t aware of her pregnancy until the last weeks of gestation, a twisted uterus that can make women appear “less pregnant” than they are or delayed implantation, where certain mammals put the development of an embryo “on hold,” though there’s no evidence of this ever happens with humans.

“She sought the treatment of shamans and pseudoscience-pedaling naturopaths who’d stoke the fires of her hope,” says Jeff, “and she continued to tell anyone who’d listen that she was due any day now.” She also argued with him about having a home birth, and began lining the furniture with plastics in preparation. “By this point, she was deep into cryptic pregnancy support groups on Facebook that allege not all pregnancies show up on ultrasounds, and that it’s common for pregnancies to last three to five years,” Jeff explains. Through the groups, he continues, she even found and visited a midwife who “told my fiancée that she felt the baby, and moved it from one side of her uterus to the other.”

In another instance of Facebook’s growing problem with groups, unmoderated “cryptic pregnancy,” as well as other pregnancy support groups, run rampant with misinformation. Beyond disavowing the medical field and ignoring distinctions between phantom and cryptic pregnancies, the groups boast thousands of members posting things like this: 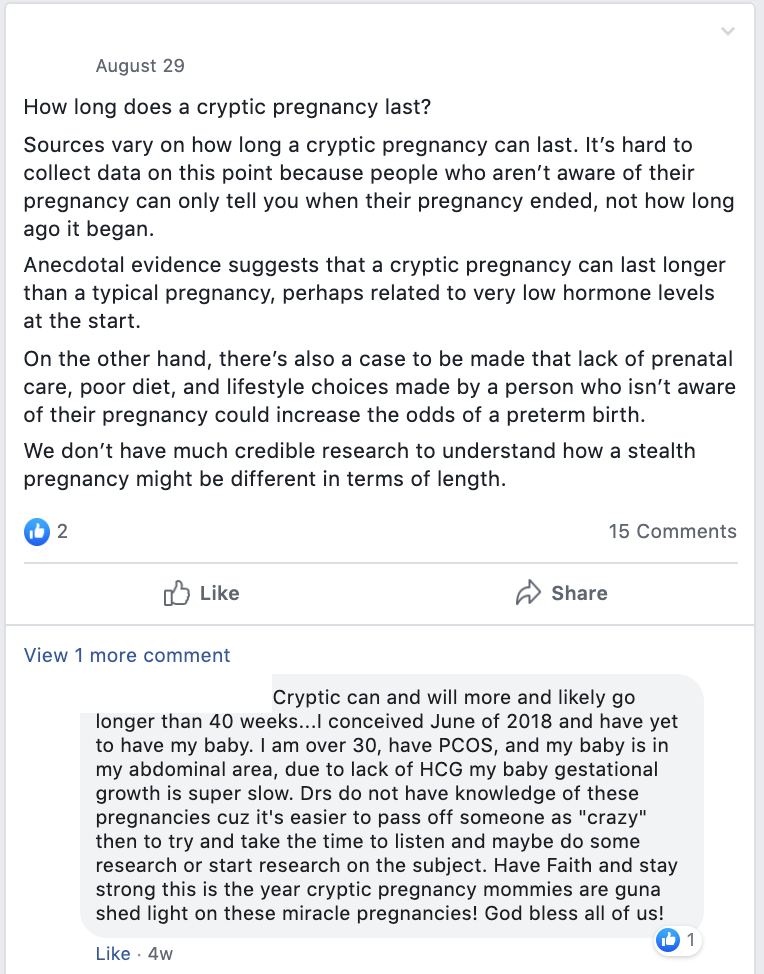 Eventually, it all became too much for Jeff. “We fought a lot. I’d try to tell her that I believed her grief from the miscarriage had produced a phantom pregnancy, but she accused me of calling her crazy,” he says. “I tried using her logic to get her into a real hospital — that such a long pregnancy would be hard on the baby, but she was insulted that I didn’t believe her. She said I just wasn’t trusting her body and intuition, and that she’d deal with the pregnancy herself since I didn’t trust her.”

Soon thereafter, Jeff decided the only way he could keep himself safe from her increasingly-destructive behavior was to leave. “There wasn’t any drama,” he says. “I took my things from our home when it became apparent that she was a danger to herself and others and I’d reached my limit of exposing myself to unnecessary risks. She was oblivious to the harm she was putting us in.”

Eight months later, Jeff has lost all contact with his fiancée. It’s likely, though, she still believes she’s pregnant. In an interview with VICE, Catherine Birndorf, a reproductive psychiatrist at New York Presbyterian Hospital, explained that the best you can hope for is getting someone experiencing a phantom pregnancy into therapy. That said, they’re usually incredibly reluctant to go. “Breaking a delusion is extremely difficult — if you tell a patient who’s convinced they’re pregnant that it’s not real, you will lose alliance with them and they will simply go to another doctor,” Birndorf told the news organization.

Jeff still hasn’t fully healed himself. “I lost my only chance of fatherhood in my 30s,” he tells me. “I was devastated, and yet for months, she’d gleefully discuss intimate details of a pregnancy that no longer existed. It ripped open a very real wound that I’m still recovering from.”