Over four films, Steve Coogan and Rob Brydon have riffed, feuded and done tons of celebrity impressions — all so they don’t have to deal with their messy emotions

Early on in The Trip to Greece, Steve Coogan and Rob Brydon are doing what they always do in these movies: eating and riffing. Enjoying a lovely meal in the open air, they discuss an imaginary scenario in which Brydon is a cop interrogating Coogan while savoring a delicious dessert. In the midst of their joke-y back-and-forth, Coogan’s long-suffering assistant Emma (Claire Keelan) calls, letting them know their itinerary for the day. Putting her on speaker, the two men proceed to go on a long, improvised tangent regarding how Brydon would describe Coogan if he mysteriously disappeared — and how Coogan wants Brydon to remember him. (“British comic goes missing,” Brydon suggests the headlines will say. “British actor/writer/producer goes missing,” Coogan counters.)

They keep dryly needling one another as Emma, phone still in hand in her London office, has to listen to the whole thing. Finally, she says, “Sorry, guys, I’ve got to go,” and hangs up. One suspects she’s had to do that a lot with these two. In that scene, which is funny and utterly inconsequential, The Trip to Greece sums up everything that’s great about this film series and about male friendship in general. The Trip franchise concerns two guys cracking each other up over dumb shit that only they find amusing — the rest of the world needn’t bother with these aging fools.

Starting in 2010 with The Trip, Coogan and Brydon (alongside director Michael Winterbottom) have regularly reunited to deliver another chapter in what could very easily be an inexhaustible string of films. The premise remains constant: British comic actors and longtime friends Steve Coogan and Rob Brydon (played by Steve Coogan and Rob Brydon) go on a road trip across a European country in order to sample fine cuisine. The excuse is always that it’s for an article or a memoir or whatever — nobody who watches these movies cares about that part. We keep tuning in to be amused as these pals engage in battling impressions, contemplate aging and harass one another over who has the better career. This may be the only franchise where you don’t really need to see the earlier installments — each movie is essentially the same, except the two guys keep getting older.

That said, The Trip to Greece (following 2014’s The Trip to Italy and 2017’s The Trip to Spain) will have a little extra emotional oomph if you’ve been keeping up. The Trip to Spain’s shock ending — in which it seemed like Coogan might be walking into certain death — is explained away quickly, and before you know it, the boys are back in the car, squabbling and goofing around like nothing has changed. But, as we’ll learn, something has: Coogan occasionally fields calls from home concerning his ailing, distant father who may not have much longer to live. But tellingly, he doesn’t share this info with Brydon. Maybe it’s because Coogan doesn’t like to open up about difficult things. Maybe he doesn’t want to show weakness around Brydon, to whom he loves acting superior to. Or perhaps, that’s not what their friendship is about — maybe they get together to try to escape what’s hard in their real lives.

Each of the movies is derived from three-hour seasons of an ongoing BBC series, which Winterbottom cuts down to feature-length stories that tend to be just under two hours. I haven’t seen the original TV series, but even as abbreviated movies they always feel a little baggy and repetitive. Like a lot of car trips, the Trip films have lots of highlights but also subpar bits where not much happens.

Of course, that’s part of the point — what vacation is immune from tedium, irritation and unfulfilled expectations? — but while there’s clearly thought and care put into the Trip movies, what makes them so enjoyable is that they feel tossed-off and half-assed, as if the actors and their director are just winging the whole thing. That impromptu, let’s-see-how-it-goes quality helps keep these films’ themes modest and unpretentious. Otherwise, they might be brooding, dire treatises on the inevitability of death, and what’s funny about that?

As Coogan and Brydon bicker and slyly denigrate one another, it’s impossible to forget that these are merely fictionalized versions of the two men — presumably snottier and more cutting than they are in real life. Even so, what’s remarkable about The Trip to Greece is that their dramatized relationship feels alarmingly close to the ones I have with actual men.

Both characters know exactly what buttons to push on the other. Coogan attacks Brydon’s lack of highbrow culture, and Brydon skewers his pal’s pomposity and desperate need for accolades. (Did you know Coogan has won several BAFTA awards? He’d be happy to talk about them…) And although their verbal jousting hasn’t significantly changed since The Trip, the reappearance of old complaints and nursed grudges contains a surprising poignancy. Coogan and Brydon keep rehashing the same fights and continue trying to better each other’s celebrity impressions — this time, it’s over Robert De Niro, Mick Jagger and Ray Winstone — because the familiarity of shared history is far more comforting than digging into conversation topics that are much scarier.

While Coogan worries quietly about his father, Brydon misses his wife, trying to connect with her when he’s alone in his hotel. Both men carry some emotional baggage, but it’s never discussed; whereas the merits of the Grease soundtrack are vigorously debated. If men didn’t have pop culture and work to talk about, they’d have nothing to say.

That’s why the sometimes seemingly endless back-and-forth bits, while no longer novel, didn’t bother me so much in The Trip to Greece. Maybe it’s the fact that all involved have said this will be the final installment, but more likely it’s because I began to suspect that, deep down, Winterbottom and his stars know how exasperating these two guys are. It’s not just Emma who grows tired of being their audience — as performers who crave a spotlight, Coogan and Brydon seek out any willing bystander to engage in their idiocy, hoping to curry their favor and gain an advantage over the other.

When Emma joins them and Coogan’s photographer girlfriend Yolanda (Marta Barrio) for a meal, it quickly becomes a competition for the women’s attention: Will they like Coogan’s or Brydon’s Jagger impression more? It would be pathetic if it weren’t so achingly human, that need to impress pretty girls by showing off and besting your buddy. Even with a random attractive waitress, Coogan and Brydon are always on, always trying to be entertaining. Maybe men compete so they don’t have to think about all the reasons why they’re competing in the first place. 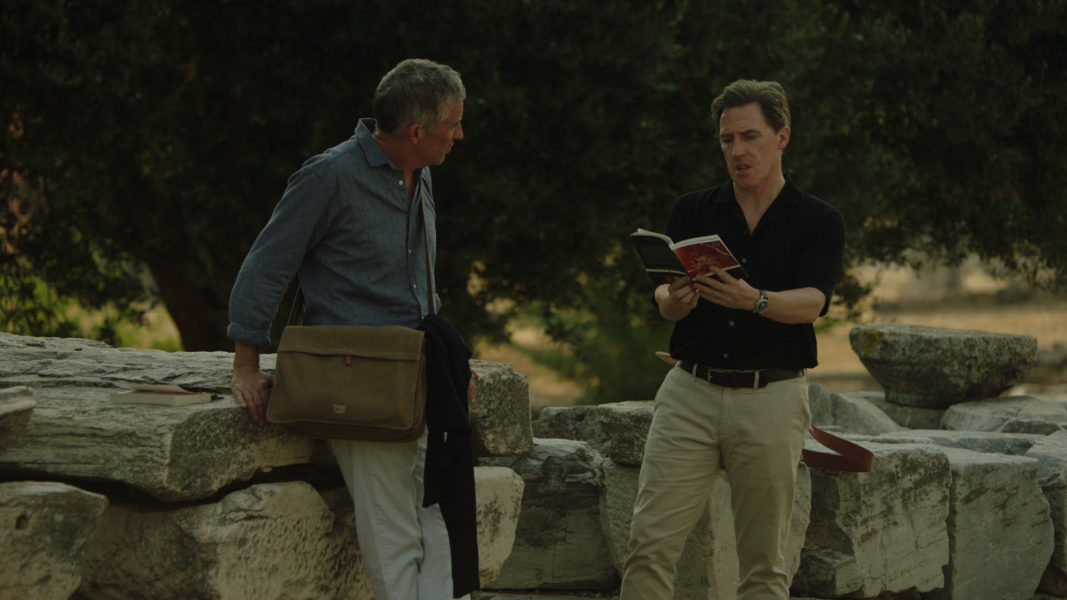 The Trip films have inspired myriad comparisons to Richard Linklater’s Before trilogy, which similarly checks back in with the same characters at different stages of their life, the scenes filled with introspective dialogue. But where Linklater goes for the offhandedly profound insight, Winterbottom and his actors merely seek a cavalcade of laughs. And yet, in their own way, both indie franchises are love stories — even if the Trip films are about a platonic love.

One of my favorite things in The Trip to Greece is whenever one of the men gets the other to genuinely laugh. It’s not that smug, chummy kind of chuckling when comedians are pleased with their own cleverness — it’s that warm laughter you can only elicit from someone who really understands you. That kind of sustained friendship is hard to find, and as you get older, it becomes exceedingly precious. As much as Coogan and Brydon banter and compete, they’re practically soul mates. Not that they’d ever admit it.

Which is a way of saying that you may not be prepared for where The Trip to Greece ultimately goes. I won’t spoil it, but if this really is the final chapter, the movie ends on a bittersweet note, the two men separated by unforeseen circumstances. Some may find the tonal shift jarring, but for me, it expressed something melancholy that had always been unspoken throughout this unlikely franchise: Men talk and talk at one another, but they barely articulate the real feelings that define their lives.

Even at The Trip to Greece’s finale — even after four movies of riffing and celebrity impersonations — these two men who love each other may not know a thing about one another.