The Straight Male Thirst for Compliments

Nothing brightens a boy’s day more than hearing ‘Nice hair!’ from his bros

Kevin Hovdestad was in his mid-20s, hanging out with a handful of friends, when one of them offered an entirely innocuous compliment: “Hey, I like your shirt!” It wasn’t anything special; nobody else in the room paid it a second thought. But Hovdestad couldn’t let it go. “My reaction was equal parts, ‘Thanks!’ and, ‘Holy shit, when was the last time someone said something like that to me?” he tells me.

This is a moment of vertigo that many straight men experience. Sometimes, we get caught off-guard when someone offers a courtesy that’s completely untethered from any other aesthetic than kindness, simply because we so rarely field compliments in the first place. This dynamic has been immortalized in a series of memes, created by some of the most sensitive souls in masculinity. A lonely cat recalls a mild nicety a girl offered him years ago, a memory he clings to in order to power through the rest of the day. An image of Pikachu woofing down a honey bun is overlaid with the text, “A compliment.” The next panel, he’s blissed out and teary-eyed, consumed with a brief spark of ecstasy. A monkey reaches through a car door and clasps an orange that’s labeled, “One compliment a year.” He’s beaming from ear to ear. 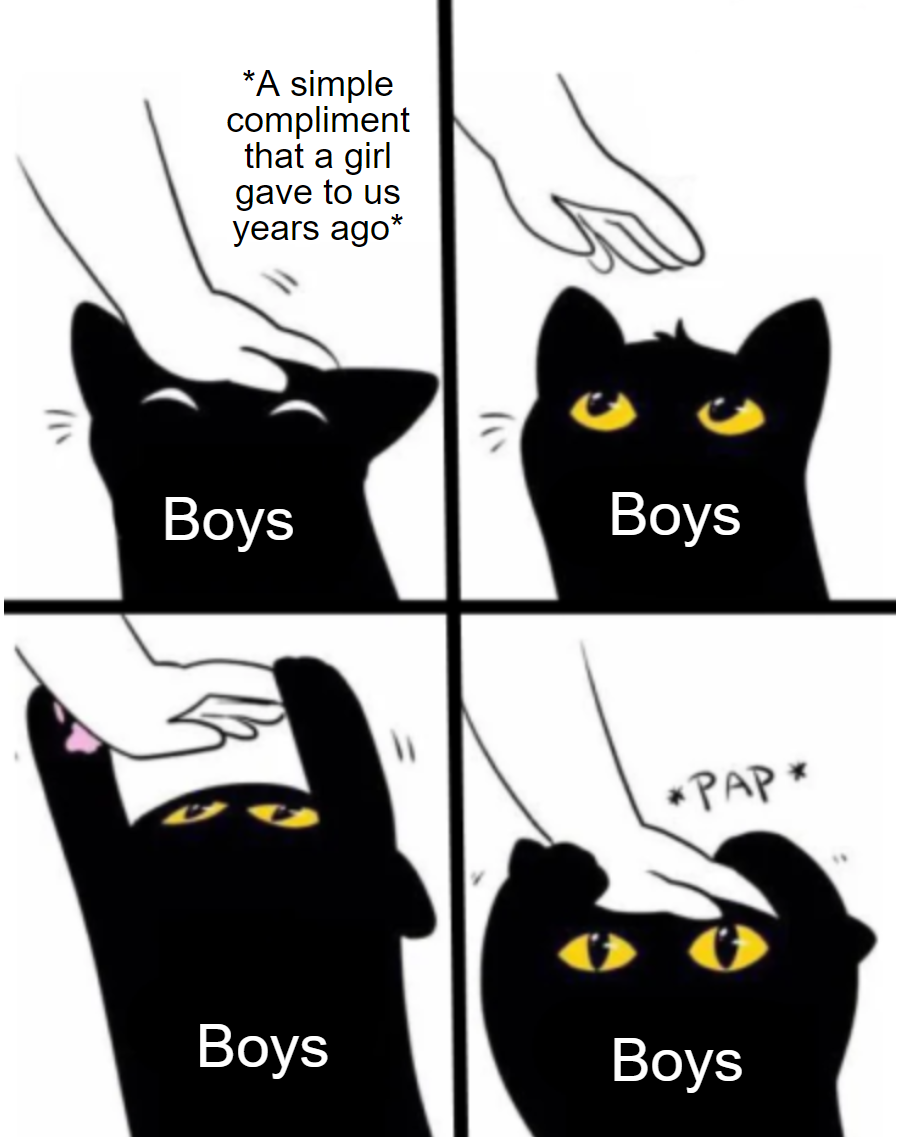 There is a self-perception among men that they don’t earn the sort of incidental praise that the culture tends to offer women, and furthermore, these men believe that they might have happier, more fulfilled lives if the world told them that they looked nice more often. I, unfortunately, kind of relate to this premise, and when I put the word out online, I was surprised to find a number of my fellow boys tell me that they too yearn for a society where they’re reassured more frequently.

“I think it’s just this quiet understanding that a lot of men have, but we don’t know how to talk about it,” Hovdestad explains. “Getting a good compliment is like peeing after a long movie! It’s almost overwhelming how powerful a simple, ‘Nice haircut man!’ becomes because you’ve waited so long for it.”

It’s easy to make the argument that straight men have nobody to blame but themselves for the infrequency that they’re psychologically palliated by the public. Women have learned over eons to never casually compliment men they’re friendly with, because those sorts of pleasantries are consistently misinterpreted as flirts thanks to the inflated, perpetually needy male id. It’s practically a self-preservation tactic at this point. “Men receive compliments poorly; they often see them as indications that the compliment-giver is ‘into’ them,” says Mark Sternberg, a 27-year-old from Chicago who is another man that recently had a disorienting crisis of self after his ex-girlfriend told him, “You must get complimented all the time!”

Sternberg’s hypothesis actually bore fruit in a 2006 Willamette University survey. As writer Casey Quinlan reported in The Atlantic, women are typically hesitant to compliment men because they fear being “too forward” or “attracting unwanted attention.” Moreover, when men do receive niceties, it’s far more often associated with their skills and abilities, rather than how a new pair of jeans fits.

That probably should be satisfying enough for us boys. It is, after all, far more substantive to have your abilities validated over the hollowness of looking nice. But surprisingly, all of the men I speak to are most thirsty to have a woman shower them with the same platitudes that they themselves might offer on a first date. Apparently, being complimented on the quality of their character doesn’t scratch the same itch. Instead, they wish to be told that they smell nice, or that their pomade looks good, or that their French tuck is on point.

The desire is to be objectified, essentially, in the most defanged sense of the word. I understand why it might be frustrating for women to earnestly appreciate a man’s desire to be patronized, especially considering the last 10,000 years of male-driven condescension — please, have your cake and eat it too! — but in 2020, men want a taste of the good parts of the traditional straight cis female experience, as long as they don’t experience the constant, humiliating commentary on their looks from all angles on their daily walks to the subway or grocery store.

That’s the thing with boys. As much as they want to feel pretty, they will very rarely feel casually threatened.

“When I think about getting a compliment, it’s absolutely about my appearance — having someone mention they think I have great taste in shoes, or that they like some physical attribute of mine,” says Hovdestad. “That’s the thing that I notice the absence of, for sure. Being respected or having people think you’re funny isn’t what gasses someone up — at least, not for me. Unless it’s like an enormous change, like a dude shaving off a foot of hair, it feels like everyone — men, women or otherwise alike — just don’t even notice. Men’s appearances are treated as these standardized, simple, immutable things, which is why we default to stuff like what we wear; I can’t even imagine someone noticing that I got a haircut.”

The solution here, from where I see it, is for men to institute the same positive solidarity that women enjoy with their other femme friends. I am frequently envious of the powwows my girlfriend holds with her group chat; they annihilate any negative thought at the germ by constantly reminding each other of how gorgeous they are. She has this thing where if someone says something hateful about their spirit or body, they then must recite three elements about themselves that they love. You can feel this same energy from the buzzing ardor in girl’s bar bathroom lines, or in the post-breakup Instagram Stories uploaded by the best friends of the recently heartbroken.

Unfortunately, we don’t carry that tradition into male bonding. I love and support all of my boys, but I’ve never complimented them about their looks, even when they’ve clearly needed it. In fact, a huge swathe of dude friendships are defined by chronic ball-busting, which honestly might have a net negative effect on male development as a whole. For whatever reason — lingering homophobia, an innate sense of cuckolded competitiveness or a fear of making things weird in some vague sense — we’re unable to endorse our fellow men when they do, in fact, look hot as shit. “I think it’s easy to forget since most of us are less open about our emotions,” says Carter, an 18-year old from North Carolina. “But it still really makes my day if someone says something nice to me.”

Most of the men I talk to about this say that they’ve brought up their dearth of positive reinforcement to their loved ones. Hovedstad had a conversation about it with his wife and male friends, and Sternberg told his ex that any compliment, no matter how tiny, makes him feel a little bit better about himself. Carter, however, hasn’t yet announced to the world that he latches onto any pleasantry he can find for emotional sustenance. “I just don’t like sounding needy, even though I sort of am I guess,” he offers as a rationale.

Honestly, I don’t think there’s a good argument against a social contract where people say nice things about each other with added regularity. The problem, as always, is that boys as a monolith are kind of weird and dysfunctional, and to this point, they’re unable to receive or administer compliments from their fellow humans without imploding in ego or spiraling in paranoia. Once we solve men, we’ll solve compliments, and finally, I’ll be able to tell my best friend that he looks really great in his new beard.