The Most Embarrassing Pop Songs We Loved as Kids

The soundtrack of our (teen) lives: INXS, S Club 7, MC Hammer, Poison and The Baha Men. Judge us if you must.

Pop music gets you when you’re young and impressionable. At an early age, your brain is still developing, and so a catchy, insidious hook can embed itself in your cerebral cortex. And because you aren’t old enough yet to develop good taste, you become convinced it’s the greatest song you’ve ever heard. But when you get older, those favorites of your youth can be like childhood yearbook photos: cringe-inducingly embarrassing to acknowledge that they ever had anything to do with you.

For a lot of Gen-Xers, New Kids on the Block might be such an embarrassment. One of the foremost boy bands — crawling out of the primordial ooze long before Backstreet Boys, NSYNC and One Direction (and developed as a white version of New Edition) — they’re celebrating the 30th anniversary of their hit album Hangin’ Tough with a spiffy extended edition and a really dopey new video:

Thank god I was too cool to ever fall for such garbage back in the day. In large part because I was too busy poring over actual works of art … like INXS’ “New Sensation.”

In retrospect, this Australian band was maybe just a step up the evolutionary ladder from NKOTB. In fact, listening to “New Sensation” now, I just want to die. When it pops up on my iTunes shuffle, I have to quickly skip to the next selection. I just want to pretend the whole thing never happened.

But as a boy, I cannot deny that I was obsessed with this catchy throwaway. I listened to it all the time. I had the lyrics memorized. I knew every edit in the video by heart. I was simultaneously into drawing my own Garfield comic strips, and so I created one in which Garfield was each of the band members in the video. (Thankfully, that evidence has been destroyed for decades now.) My mania over “New Sensation” is what happens when you haven’t discovered girls or hobbies yet.

Even worse, my embarrassment mixes with sadness since the band’s lead singer, Michael Hutchence, took his own life in 1997, dead at the age of 37. His suicide only makes “New Sensation” feel further and further away from my adult life.

Below, other members of the MEL team offer their picks for the most embarrassing songs they loved as a kid. Don’t judge us: You’ve got musical skeletons in your closet, too.

In 1998, S Club 7, an English pop group comprised of seven amazingly talented members (Tina, Jon, Paul, Hannah, Bradley, Rachel and Jo), rose like a phoenix out of the anus of the Spice Girls.

At the time, I was an American kid living overseas who was just trying to fit in. I honestly can’t remember much of what I was listening to back then, but for some reason, this shitty song is forever engraved in my brain. — Sam Dworkin, Senior Designer

“U Can’t Touch This” by MC Hammer

I want to make something very clear: My love for “U Can’t Touch This” isn’t a guilty pleasure or a secret. As a kid, when Hammer was the biggest thing in the world, I annoyed the shit out of my family with my Hammer-mania. Every time he was on TV (which was a lot in the early 1990s), I’d run to the screen yelling loud AF, “HAMMER! HAMMER! HAMMER!” As my brother says, “You couldn’t get nothing done in the house when Hammer was on, cause you would scream the whole time he was on. You screamed louder for Hammer than when you fell down the stairs.”

It’s true. I had his doll. I watched his cartoon religiously. And I knew all the moves in his video. Mind you, I was two years old when all of this was going down. I don’t know what it was about Hammer that I gravitated toward back then, but my love for Hammer is still there today. Seriously — peep the glee in my face when I met my childhood idol at a Grammy party last year. I look like I’m about to kidnap this man. 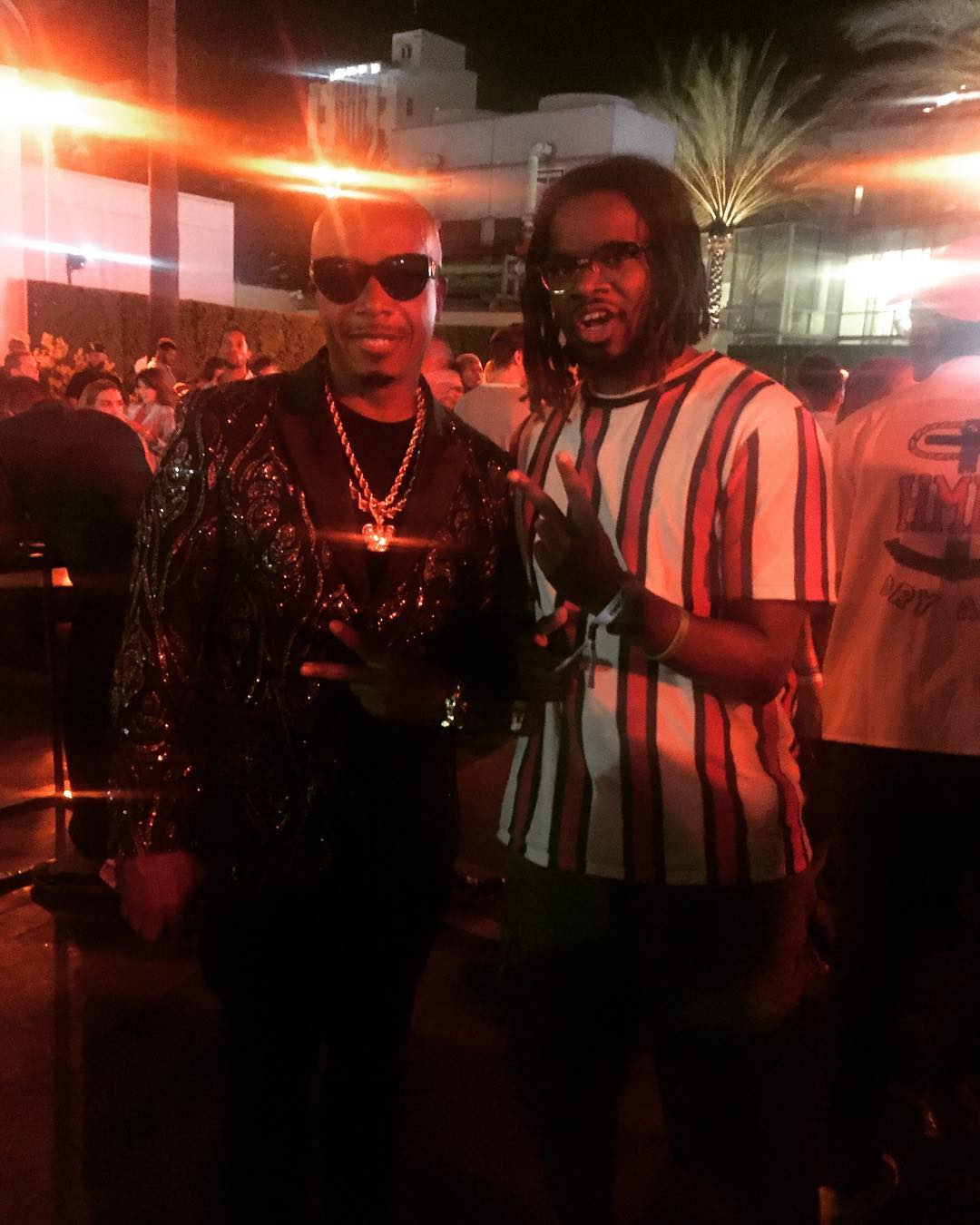 Today, the hip-hop community in general has unfairly turned Hammer’s success into a joke. He was goofed on in songs like LL Cool J’s “To da Break of Dawn” and movies like CB4. The fact that Hammer didn’t have a gangster persona on wax or curse in his records — smiling and dancing his way up the charts instead — made every other rapper jealous and left him susceptible to claims that he was inauthentic. But in reality, Hammer was very gangster — the Rollin 60’s Crip allegedly once put a bounty on his head — he just didn’t use it to sell records. He would have rather rapped about God and lifting yourself up — both of which are things a kid needs to hear as they’re coming up in this crazy world. — Tarik Jackson, Story Producer

“Every Rose Has Its Thorn” by Poison

One understandable but often unfortunate fact of history and music is that everyone learns both backwards. So it only follows that in a small town in Tennessee in the late 1980s, I heard hair metal before “real” metal, and real metal before punk. And because of this critical detail, when Poison came to my world in 1986, it stood next to Whitney Houston, Janet Jackson, country and bluegrass for comparison. I adored those things, too, but this was the most thrilling, transgressive music I’d ever heard, and I loved it.

I’m talking about Look What the Cat Dragged In, the band’s first record, which compared to the hopelessly cheesy pop metal they’d do later, a song like “Talk Dirty to Me” is raucous punk with its sleazy three-chords fuckfest. But my irredeemable opinion is that I still liked them two years after that, too — at least the song “Every Rose Has Its Thorn” off their third album, Open Up And Say… Ahh!, whose title alone is embarrassing even to type.

The song is slow, semi-acoustic, treacly country posing as a hair metal ballad with a screechy wail of a guitar that asks its listener not only to believe that Bret Michaels, an unabashed pussy hound who auditioned girlfriends on reality TV, has depth, but also a working understanding of lyrical contrasts, as well as the capacity to experience human heartbreak (it’s supposed to be about him finding out his exotic dancer girlfriend was cheating on him). That’s the tall order of all hair metal ballads, which expect us to believe that men who tour relentlessly in glam rock bands have the time to pen lovelorn odes to women they’ve lost, in between, I’d guess, blowjobs and signaling to the bouncer to pull the next groupie backstage for her turn.

But when I was 13, I believed it, because it sounded like real heartbreak to me. I listened to it again and again, usually gliding around the skating rink on slow skate, looking for clues in its sadness and regret for some grownup feeling, a foreshadowing of what would befall me, so I’d be ready. No one had broken my heart yet, but if they did, I bet it would feel just like that. Like how you can be close together, but miles apart? Like how a beautiful rose has those sharp thorns and shit? Like how there’s day and all, but then also night? Like how cowboys are cool and stuff, but also sad?

Only that moment never came. At least, not with that song. That year I would get and dump my first boyfriend, a mulleted redneck who drove a yellow Camaro and did donuts in the parking lot before our dates. But because I was the one who fell out of love, when we broke up, the song became his ode to regret, not mine. He played the song tearfully one last time in the Camaro before dropping me off, yelling at me that to see me with someone else would “cut him like a knife” — JUST LIKE IN THE SONG — and suddenly the lyrics were mortifyingly embarrassing. (JUST LIKE HIM.)

Today, of course, I see that they always were. But I still hear it on occasion, and I still have a soft spot for it. And for the way pop songs I listened to at that age all seemed to contain a wisdom I’d one day grasp when real life finally happened to me. Most of them, like “Every Rose Has Its Thorn,” end up just being trite clichés that don’t get at the truth, and there would be, thank god, truer songs to find that would elucidate better what the point of relationships are.

So now I can honestly say, with pride, that it’s definitely summed up perfectly by “Talk Dirty to Me.”  — Tracy Moore, Staff Writer

“Who Let The Dogs Out?” by The Baha Men

This song came out when I was 12 and was so ubiquitous I associate it with my childhood PTSD. Originally a cover (what?!?!), the Bahamian group the Baha Men released their version in 2000, and it quickly became a Top-40 mainstay, somehow even winning a Grammy, though I just re-listened and I don’t understand a universe in which adults couldn’t recognize this for what it is: the worst song of all time.

It’s hilarious that millennials have made misogynist memes out of the song in recent years, especially when you consider that the original writer, Anslem Douglas, actually has said that he sees at as a feminist anthem: “It’s a man-bashing song. I’ll tell you why. The lyric of the song says, ‘The party was nice, the party was pumpin’.’ When I said the word ‘party,’ I was being metaphorical. It really means things were going great. The ‘Yippie-yi-yo,’ that’s everybody’s happy, right? ‘And everybody was having a ball.’ Life was going great. ‘Until the men start the name-callin’ / And then the girls respond to the call.’ So the men started calling the women ‘skank’ and ‘skettel,’ every dirty word you can think of. The men started the name-calling, and then the girls respond to the call. And then a woman shouts out, ‘Who let the dogs out?’ And we start calling men dogs. It was really a man-bashing song.”