The Granddaddy of ‘Sugar Daddy’ Free-Money Scams, The ‘Liz Lad’ Army and the Radicalization of Architecture Twitter

What’s more likely: Some “benevolent” stranger offers you thousands of dollars in “free” money, and all you’ve got to do  is retweet his generous offer? Or, IT’S A SCAM?

Thank you for coming to my TED Talk.

“Is the Sugar Daddy Who Gives Away Tens of Thousands of Dollars on Twitter Real?”
@TheSugarDad1 is a mysterious Twitter account which, nearly every day on the internet, gives away five-figure sums of cash to complete strangers — or so it appears. Because while there have been numerous examples of “wins” by his many lucky followers, all of whom are eager to tweet at and retweet @TheSugarDad1’s posts for a chance at free money, Zaron Burnett III has found a growing amount of evidence that everything @TheSugarDad1 does is part of a very clever scam. READ MORE

In the last couple of years, the phrase “men are trash” has become a sort of rallying cry online for anyone who’s ever had a negative experience around a man. Dating men, it would seem, is a particularly quixotic endeavor — and yet, women still date men. In an attempt to understand this apparently masochistic impulse, Madeleine Holden spoke to more than 50 people who date men — mostly straight and bi women, but also a handful of gay men and non-binary people — about why they keep coming back for more.

Your Position at This Company is Redundant

Anyone who’s ever worked a job has felt the paranoia that they’re quietly being replaced by the “new guy.” Usually, the initial reaction is some combination of debilitating panic attacks and frantic revenge plotting. But you should really try with all your might to keep calm, since freaking out is the absolute worst thing you can do in this position. Here’s why.

Don’t look now, but after a few months of struggling to find her political footing, it seems as if Democratic presidential hopeful Elizabeth Warren is beginning to build some momentum, particularly on Twitter.

And it would appear that long-time Bernie Bros are finally taking notice of the fact that Liz (alright if we call you Liz?) is out-Bernie-ing Bernie with her well-reasoned positions. As Miles Klee argues, perhaps it’s time we fully commit to the Liz Lad Army.

Fighting Over Chores? There’s an App for That

A new app called Labor of Love, set to launch at the end of this month, not only aims to help couples split up chores more equitably, but gives out rewards for their completion. Tracy Moore spoke to the app’s creator, Bob Ford, about how his app puts the onus on both partners to not just pitch in, but to show their appreciation for the other in terms they actually respond to.

For people who sweat — and I mean really sweat — going in for a job interview can be more terrifying than doing Shakespeare in the Park before a packed audience bare-ass naked. And how can you blame them? After all, it’s hard to project self-confidence when your suit pants are soaked through. Yet, making a good impression isn’t impossible. Quinn Myers polled multiple heavy sweaters and a dermatologist for tips and tricks for how to prep for an interview without becoming a hot mess.

We Didn’t Start the Fire

In 2019, the “royal we,” — as in “we will do better” — is officially our generation’s “mistakes were made.” After all, a person using “we” instead of “I” when taking responsibility for a failure of leadership or a public misstep is as lame as they are gutless, because while it sounds like a humble statement of contrition, it’s really just a subtle way to deflect blame. And that shit has to stop.

Architecture: Battleground in the Culture Wars 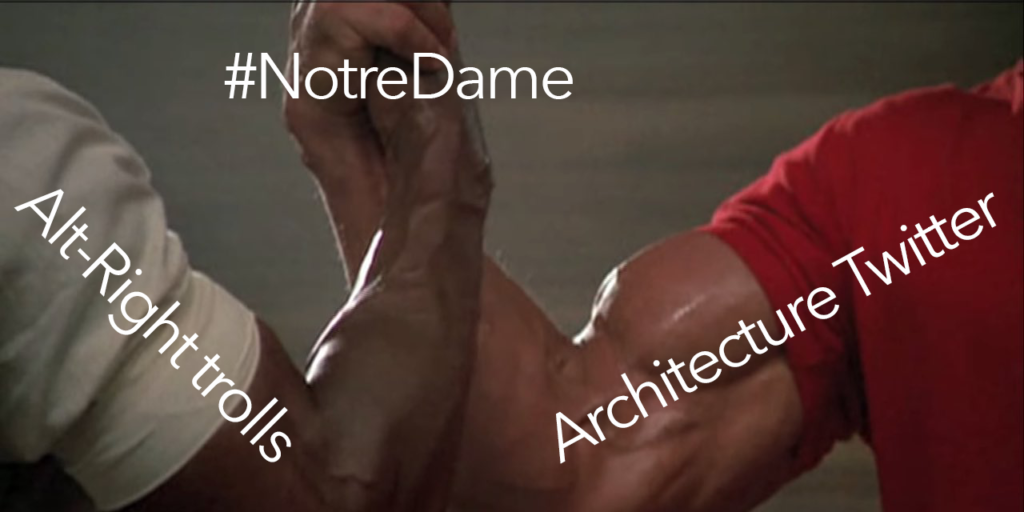 “Restoration, not redesign!” If that sounds like a battle cry for both an alt-right hellbent on saving the purity of the white race, and architects hellbent on saving Notre-Dame, it might actually be both. Because online white nationalists have jumped at the opportunity to defend the fire-ravaged cathedral from the hands of Globalists and Modernists who would change her — a defense they see as a microcosm of the larger Culture War.