With just months to go until Avengers: Endgame spells out the fate of Marvel’s biggest superheroes — probably breaking a few box-office records in the process — the hype is already at a fever pitch. There are dozens of theories as to what may happen and how — some involving time-travel, others not so much. What seems inevitable is the return of many characters who died at the end of Avengers: Infinity War but have standalone sequels scheduled for the coming years, including Black Panther and Spider-Man.

Those heroes dissolved, along with half the life in the universe, when Thanos — a bald purple guy who kind of looks like he should be in family court for failure to pay child support — snapped his fingers and wished it so. This was possible thanks to a cool metal glove in which powerful, brightly colored gems were embedded. It all makes perfect sense, is what I’m saying. And then Thanos got to live his dream of watching the sun rise over his… farm(?), satisfied in the knowledge that he’d created balance. That ending was the boldest and most affecting in any Marvel blockbuster.

Some fans loved it. Really loved it. Thanos diehards quickly took to Reddit to argue, only half-jokingly, that his mass murder was actually the most ethical move. The community is called Thanos Did Nothing Wrong — a play on the “Hitler did nothing wrong” meme.

But we all know the franchise can’t stop there, because $$$, and I guess a few 8-year-olds would be traumatized if Spidey were really dead.

So how is the Thanos fandom reacting to Avengers: Endgame and its prospect of returning characters? Not too well. 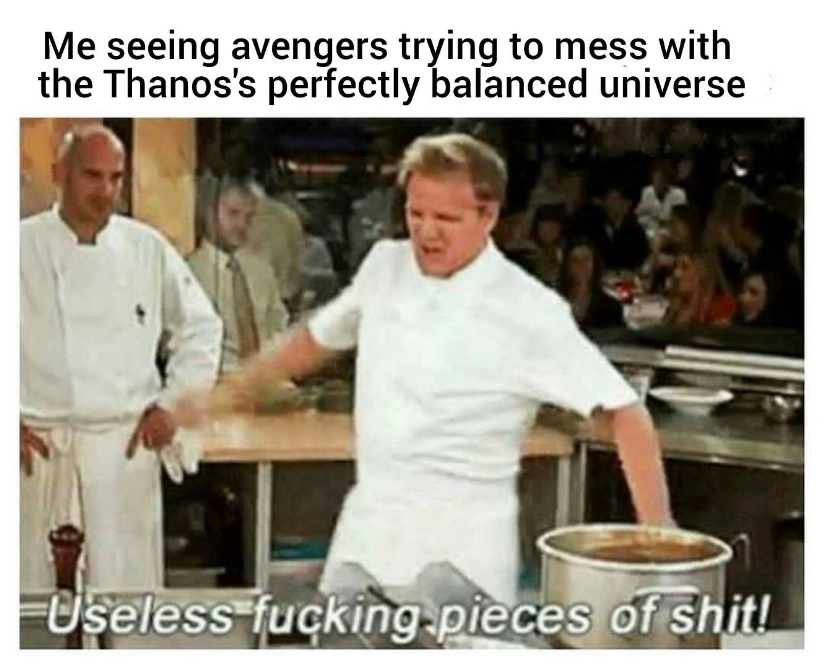 Let’s back up a bit. Over the summer, r/thanosdidnothingwrong exploded with memes praising the Mad Titan’s intergalactic act of mass killing. The forum proved so popular, in fact, that the moderators eventually staged a “snap” of their own, “killing” half the subscribers — about 300,000 randomly selected people — in the site’s largest-ever mass ban. Even the Marvel brand itself, Infinity War’s directors and Josh Brolin, who plays Thanos, got in on the party. Meanwhile, the site Did Thanos Kill Me answered that question for anyone who dared to click, and geek culture commentators wondered if Thanos had surpassed the Joker as the ultimate comic book supervillain. 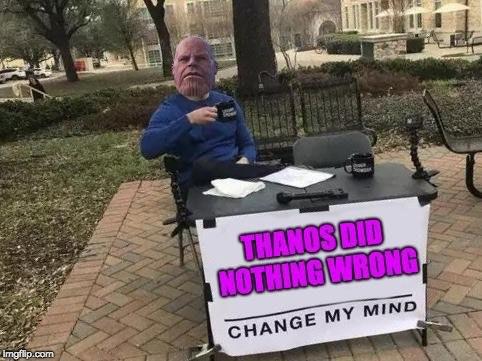 But was Thanos really in the right? On paper, it doesn’t appear that he has a solid case.

Philosophically speaking, Thanos is the utilitarian to the Avengers’ Immanuel Kant, as David Roberts explained in Vox: Their moral imperatives forbid the idea of weighing lives as if in an equation, whereas he is free to follow cold mathematics toward a higher good, as he understands it. There will theoretically be less total suffering after he culls the herd, so he must do this. The trouble is that his Malthusian ideas have already been debunked; the reasoning is valid, but the premises are false, leaving his argument unsound. Additionally, as many have pointed out, Thanos had the power to correct the universe’s ills in far less brutal fashion.

Fans have spent the better part of 2018 going deep on the flaws and holes in Thanos’ plan, with a few saying it contains no sense whatsoever. Their complicated proofs and probability models, however, make it even funnier to embrace the simplistic nihilism of replying “Thanos did nothing wrong,” a rhetorical move that mirrors his own unstoppable momentum versus an army of do-gooders. Which brings us to the more salient point: Thanos is a bad guy. Why are we taking anything he says at face value? There’s a nonzero chance he’s trolling the Avengers whenever he opens his mouth. C’mon. 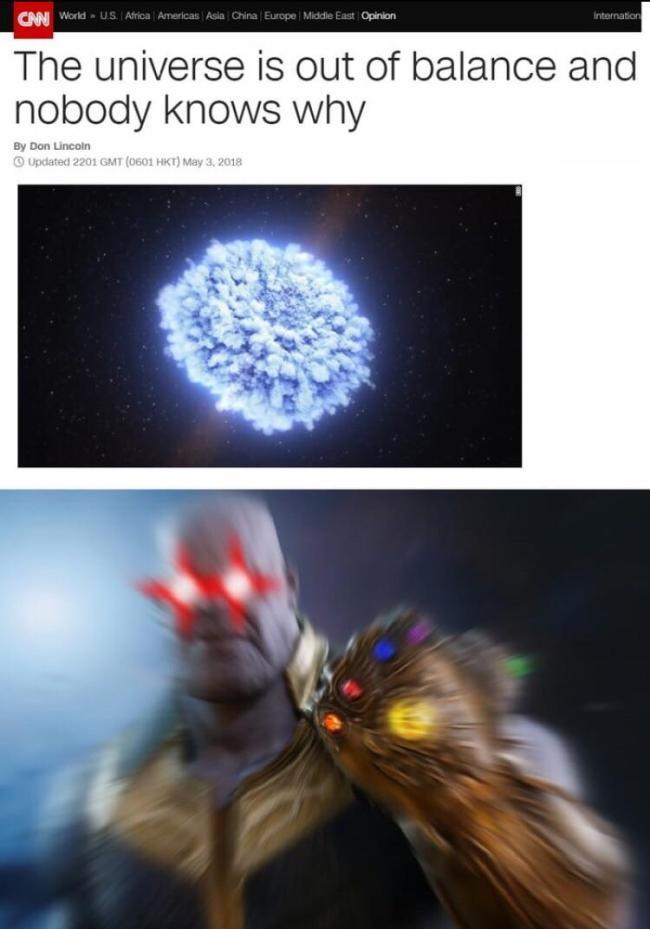 Without watching Endgame, we don’t know enough to speculate on the efficacy or ethics of Thanos’ snap, nor how it cleaved existence in half. Maybe he created split realities, and everyone on the other side is fine! What we do know is that it wasn’t purely a numbers game; he also wanted to teach the Avengers a lesson about their hubris and refusal to face hard truths. It was a spiteful choice, and, on a meta level, it was a solution to the bloat of superhero cinema, a genre now locked into three-hour movies where 80 different characters each get a dozen lines of dialogue. That Thanos proved such a crowd-pleaser should perhaps concern the studios churning out this fare, as it showed that people were eager to have humanity’s saviors not only fail but disintegrate. Admit it: There was a vicious pleasure to those morbid farewell scenes.

Thanos was unwilling to expand life when contraction served his purpose; in essence, he was saying, “Start over.” And since that was an emotional or abstract option rather than a boring logical one, the prospect of the Avengers undoing Thanos’ work and spoiling the clean slate — by a mechanism that is almost bound to feel like a cheat — remains unappetizing. Oh, the redditors are destined to pre-order midnight premiere tickets no matter their current opinion, though I suspect they will note the frustration of Marvel resolving a narrative that is already resolved. It will involve our superheroes picking a battle with a retired warrior-god, causing further death (the data shows, incidentally, that the good guys are more violent than their foes) for a sentimental cause.

So while “Thanos did nothing wrong” is, at its core, a familiar joke about rooting for the bad guy, it contains a warning as to the limits of a pop aesthetic that has dominated our screens for upwards of a decade at this point. We liked that the Avengers lost, having tired of their victories and pretty internal strife. We might actually like the chance to observe these actors in different roles and other worlds. Within the laws of the Marvel universe, Thanos may not have acted fairly or mercifully as he supposed, but as an unprecedented threat to the monoculture of this stuff, there’s no doubt we’re on his side.

And what a shame it will be to see his correction overruled. 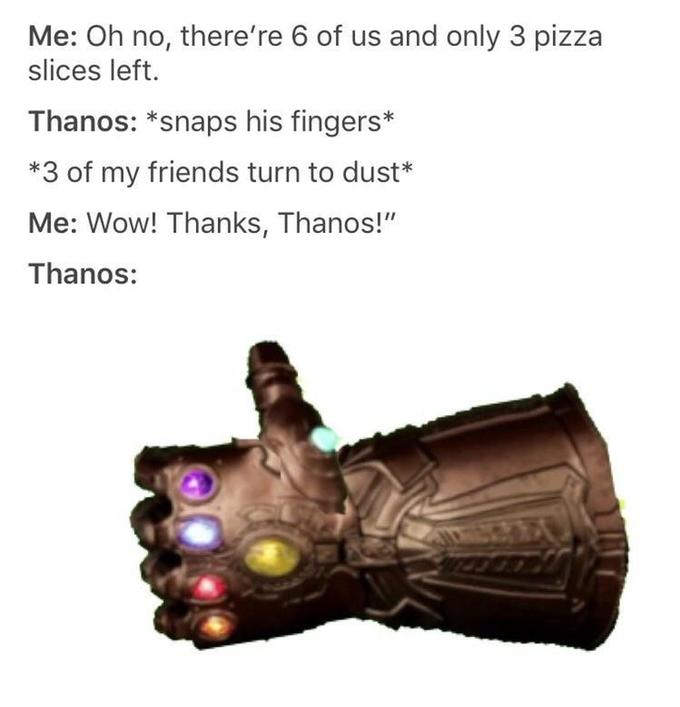