On the subreddit Swole Acceptance, men support one another’s right to get jacked — one verse at a time

The internet can be a dark place for lonely men, but the subreddit Swole Acceptance is a rare exception — at least for dudes looking for support in leading their most shredded lives. I admittedly came to the page for the muscles, but stayed for the range of posts on body positivity for bros. There’s light fare like April Fools’ goofs about missing leg day, Winnie-the-Swole memes about deadlifts and dad jokes about having an iron allergy (you know, because every time you touch the stuff you get really swollen).

On a more serious note, there are also many emotional posts dealing with grief and addiction:

But the one thing almost all of these posts have in common is that they’re written in verse. In particular, they pray to Brodin, presumably a bro version of Odin, the God of poetry and war. At times, in fact, it’s almost like they’re communicating in a secret code. “The lingo came about naturally — a means to keep outsiders out,” moderator gzcl tells me. The group has gained more than 106,000 followers since it started in May 2012, and according to him, “it’s a gem in the shitpile of Reddit.” 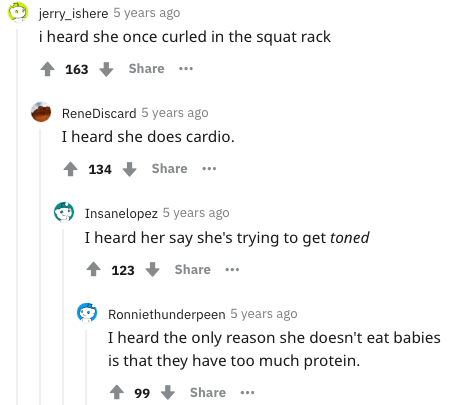 Yet despite all the positivity, redditor Gregarious_Raconteur says the group has manosphere-adjacent roots. Commenting on a post questioning if the subreddit is merely an elaborate troll, he claims it was originally meant to make fun of the body-positivity movement, “especially those with a laundry list of excuses, blaming every aspect of their lives on various forms of ‘oppression,’ or who would shame people who are thin or muscular.” He goes on to explain that “usually people would copy a blog post from some sort of ‘activist’ and replace ‘fat’ with ‘swole,’ ‘thin’ with ‘weak,’ ‘diet’ with ‘bulk’/‘cut,’ etc.”

Over time, though, the group shifted to adopt the very discourse they originally ridiculed. “As the sub grew, people started to take it slightly seriously, because there are a lot of negative stereotypes of fit/muscular/swole people — the dumb jock, meathead, thug, etc.,” Gregarious_Raconteur continues. “Or people who find it perfectly acceptable to randomly grope/fondle a swolebro’s muscles.” Somewhere along the way, they decided to combine humor and poetry as a means of expressing themselves (presumably as a way to talk about their feelings and insecurities without feeling too vulnerable). This includes full poems about getting swole — a la “Night Gathers and Now My Cut Begins”:

Redditor Daztur recalls writing the poem “as a joke after reading too many Game of Thrones memes.” “The specific language is a weird Shakespearean faux-Viking,” he tells me. “Those sort of weird internet pseudo-dialects entertain me so I sorted by best and tried to emulate them.”

Many of Swole Acceptance’s poems are couched in parody — e.g., “Twas the Night Before Gainzmas” and “First They Came for the Fatshamers,” based on Martin Niemöller’s WWII-era poem “First They Came…” about the Nazi occupation of Europe. “[‘First They Came for the Fatshamers’] is interesting for a few reasons, but mostly because of the speaker’s point-of-view and the poem’s overall political positionality,” explains Elisa Karbin, poet and assistant professor of English at Marquette University. What was significant about the original was that Niemöller made himself vulnerable, acknowledging his own cowardice and complicity in going along with the Nazis.

The poetry of Swole Acceptance might not be for everyone — it might not even be technically good — but when it comes to healthy outlets for all that pent-up testosterone, writing bad poems about your muscles isn’t the worst way to cope. At the very least, it’s entertaining. “Is it the gym poem equivalent of a John Wick movie? No,” Karbin jokes. “Is it pretty close if you squint your eyes? Yes. Yes, it is.”