Why? North is “incredibly versatile,” Burke tells MEL. He loves the actor’s pedigree. “He’s been doing film since before I was alive, so there isn’t a role he hasn’t filled. Damn, even my dad probably knows about him.”

Burke also loves watching North orgasm. He first discovered the performer while looking for tips on how to increase the volume of his ejaculate so he could give his girlfriend at the time “the biggest facials.” As he scanned through videos, he started to recognize “the same dick” appearing “like 50 times in an ‘In Da Eye’ cumpilation.” It was love at first stroke.

Many ostensibly straight guys come together on Reddit and other online forums, creating fandoms and in-jokes around male talent — even specific penises.

An unsettling Reddit thread spoke of a Two-Tone fandom gone too far: 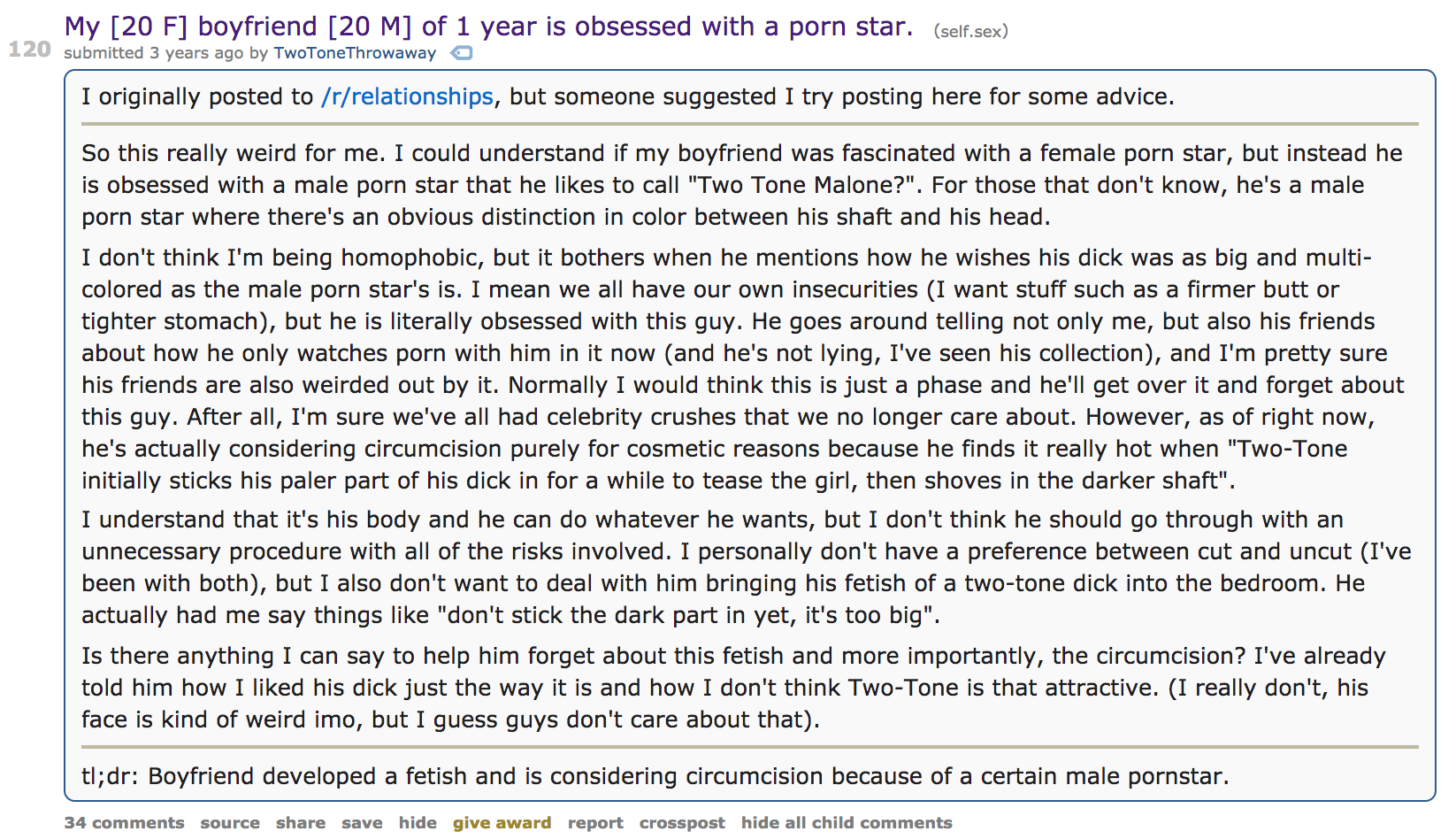 This guy is a very talented performer. The stamina is unreal! I can see this guy having a lot of female fans. He is very respectful to the women he is working with and I imagine a lot of women love to watch that.

Big fan of your work Ryan, no homo but I aspire to be like you brodie! Love your style and love knowing that some of the moves I thought I invented are performed by you! Inbox me if you get a chance!!

One user, u/Mustang80, said he likes Jordi “El Nino” Polla because, like the actor, he is “short, skinny and Spanish … so I’m glad someone as niche as me is being represented. Pretty cool seeing him take down thick girls significantly taller than him.”

Another user, u/girraween, says he liked James Deen before the rape allegations, because “he looks like a relatively normal guy who you’d see in the street. … The ones I hate are anyone who’s jacked up. They always get veiny and grunt a lot. Ugh. So off-putting.”

“I’ve read [that] he takes the time to sit with the female performer before shooting, get to know her, talk about limits, what she’s comfortable with, what she isn’t comfortable with,” he adds. “Having a male star who genuinely cares about the female actors and her boundaries just makes watching his scene much more… genuine? I feel comfortable when watching his scene, because I know that the women he is with are completely safe in his hands, and they probably genuinely enjoy having sex with him, because he cares.”