Sir, You Are Not the Joker

There are images that stick with you, and one that haunts me is a man on a bench in Hollywood, at the middle of the day, waiting for the bus. I was walking elsewhere, distractedly, and as I passed him I took a second, sneaky look: He was done up in full Joker getup, Heath Ledger vintage — greasy green hair, purple suit and the violent red slash of a painted smile. Waiting for a bus, it struck me, was not much in character for the Clown Prince of Crime, who surely travels in more ostentatious style. He also looked exhausted, and to seal the tragicomedy of the scene, he wearily smoked a cigarette.

I wasn’t too alarmed by this depressive figure; I guessed he was one of the guys who adopt some movie persona in order to pose for pictures with tourists on the Walk of Fame, and that he was probably on his way home from a few hard hours at that gig. But the Joker Guy pops up in many other, less appropriate contexts, without the justification of a side hustle or comic book convention. He appears on Tinder, and he’s doing vaguely creepy TikToks at Walmart. Sometimes he’s just… out there, walking around.

Obviously, the Joker Guy puts people at unease, which he must want and/or enjoy. Carry around a sword while wearing your Joker makeup and you will be arrested. But there’s a hilarious way in which most Joker Guys undercut their threatening aura by taking the Joker so, well, seriously. We’re talking about grown men who style themselves, in their daily lives and for no special occasion, as the villainous clown who fights a rich weirdo in a bat costume. In 99 out of 100 cases, someone dressed as a generic clown is going to be much scarier. The Joker Guy hopes to come across as dangerous and unpredictable, with a tWiStEd sense of humor, but instead he registers as, like, a Reddit atheist whose wife left him after he lost all their money in Bitcoin.

I mean, yeah, a Joker Guy stealing the tip jar from a waffle bar in Toronto? Sounds about right. Sort of doubt he’s building up to that big bank heist. This is the kind of thing that makes me wish a Joker Guy would stroll into the coffee shop where I’m sitting right now, simply so I could grab him by the shoulders and yell, “Sir! SIR! You are not the Joker! Life is fleeting! There’s a time and a place to cosplay as a murderous psychopath in garish clothes! Do you want to be mistaken for a mass shooter just because you’re trying to project weird, somewhat menacing energy into the world in order to feel a semblance of control?”

Even better, I could interrupt a meeting of Hollywood executives and beg them not to keep green-lighting Joker projects like the upcoming “origin story” film, which features Joaquin Phoenix being especially Joaquin Phoenix-y and will earn us another decade of the unhealthy fanboy response we saw post-Ledger. Don’t believe me? The dudes commenting on the trailer are already in awe of this line: “I used to think that my life was a tragedy, and now I realize it’s a comedy.” That is… not at all profound! That is something you wrote on your LiveJournal in 10th grade. Come the fuck on. 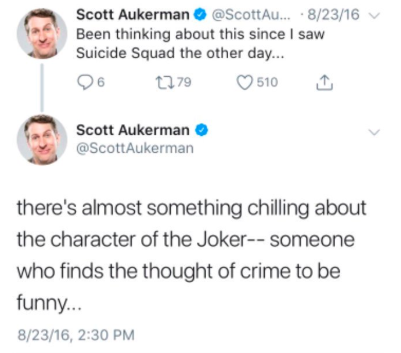 Inevitably, when I consider the Joker Guy, I come back to this very good tweet from comedian Scott Aukerman, who in one deft motion skewered the faux profundity of the Joker as an antagonist. In truth, the Joker’s great strength is the purity of his madness, which needs no explanation and is completely ruined by semi-intellectual elevation or examination. HE’S A BAD CLOWN, OKAY??? Announcing or constantly reminding us that you identify with him is such a basic bro move because there’s no there there, no interiority to really latch onto — only an inversion of the emotional spectrum and the juvenile edginess of breaking taboos. For these man-children, however, since they’re not cooking up schemes to kill everyone in Gotham with laughing gas, the act of putting on the Joker ensemble is the attack on norms. Trouble is, in our superhero-saturated nerd culture, doing this shit is somehow more conformist than not. It’s almost quaint.

Anyway, I’m tired of it, but I wrote this piece — so maybe the joke’s on me. All the same, I yearn for a way to retire the character, along with Harry Potter political analogies and Star Wars discourse. People are free to like what they like, of course, and to share that enthusiasm among their in-group. But they should know that when they try to embody the Joker in day-to-day life, they erode whatever cachet the Joker has. Odds are, you look like that bummed-out fella puffing away on that bus stop bench, and frankly, I’m worried about anyone who arrives at such a glaring dead-end.