Everything You Never Wanted to Know About the ‘Sigma Male’

Some letters of the Greek alphabet are familiar to English speakers. Alpha, as the first, we have taken to mean superior — leader of the pack. Beta, the successor, is second fiddle (or a software prototype not ready for market). Pi, of course, is a cool number. But if you were ever part of a college frat or sorority, then sigma, the 18th letter, may hold no meaning for you.

And some fellows would really, really like that to change. 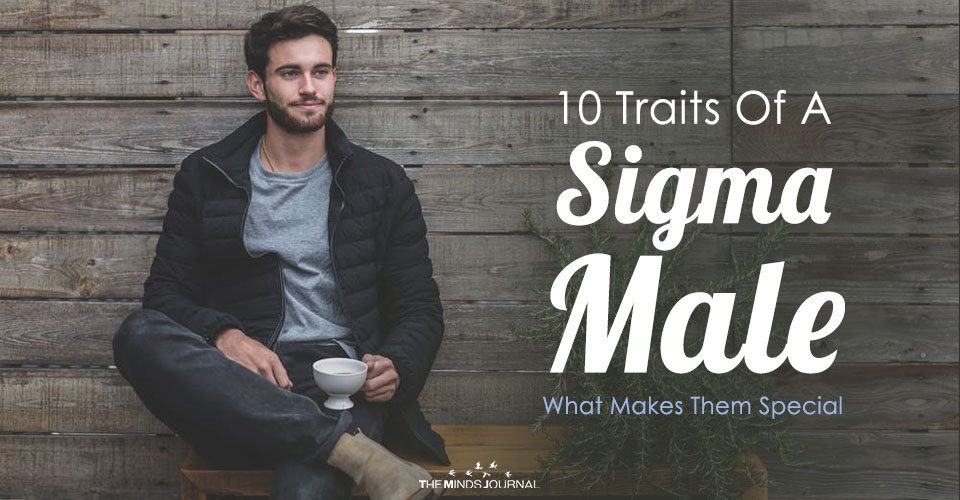 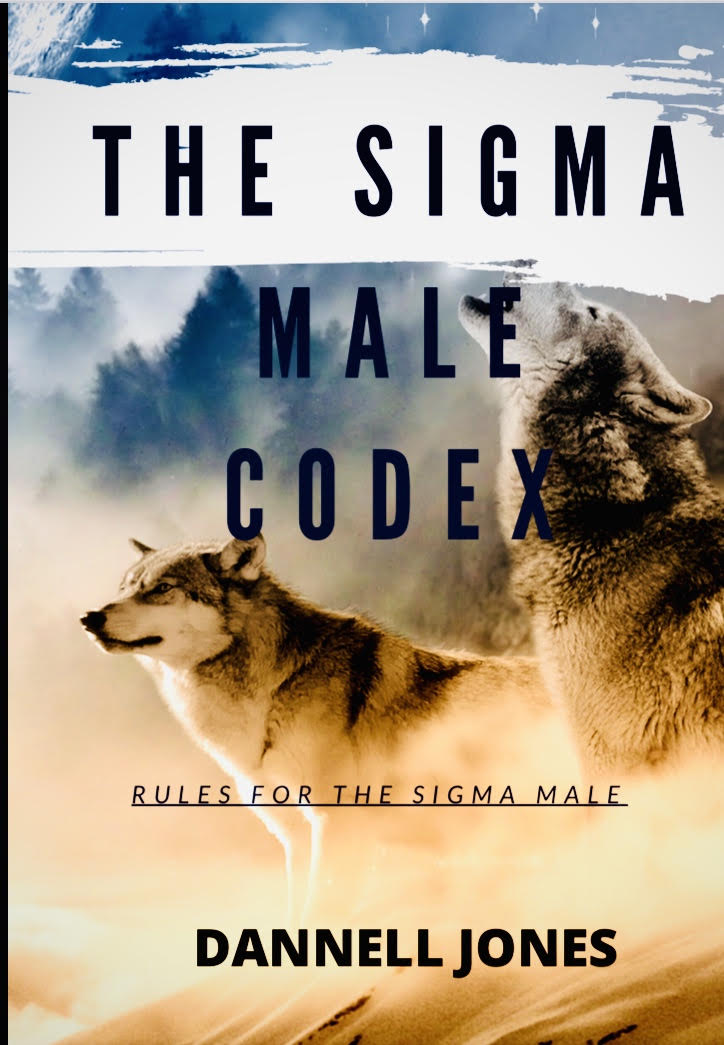 That’s right: It’s another male archetype struggling to escape the manosphere forums and become a mainstream concept. Already, there are blogs that list sigma male attributes, YouTube videos about identifying as a sigma male, self-published books on the sigma male lifestyle. Like all other taxonomic terms for men in this space — Chad or incel, fuccboi or cuck, wife guy or DILF — the sigma label derives from a set of assumptions around social ranking as it pertains to sexual dominion. Unusually, however, the sigma concept also sees amateur gender theorists trying to break the traditional masculine hierarchy and acknowledge the man well beyond it. 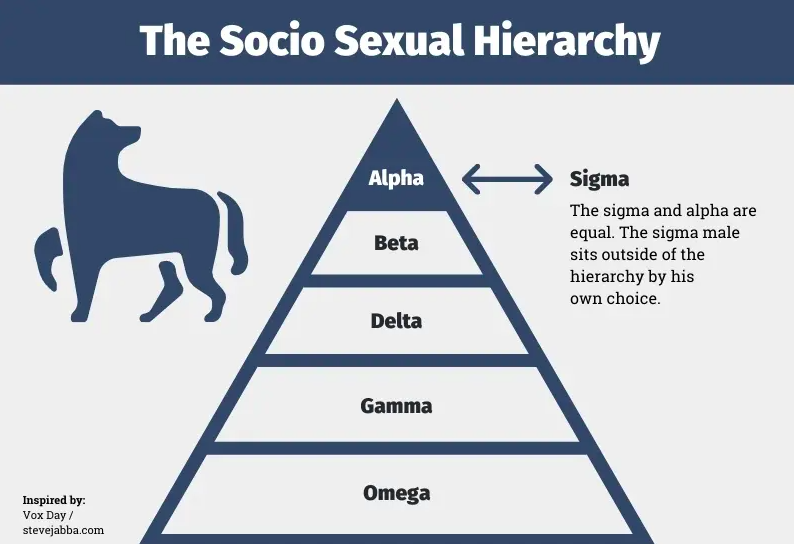 The category of the sigma male dates back more than a decade. In 2010, Theodore Robert Beale, a far-right culture warrior with racist and misogynist views who writes under the alias Vox Day, laid out the pecking order seen in the graph above. It was to become incredibly influential within communities where men gripe over lack of access to women’s bodies. Alphas he described as the authoritarian, hypermasculine elite, unfailingly confident and a trophy partner for the opposite sex. If they are the CEOs, then betas are middle management, successful enough, though not in charge. Deltas and gammas make up two lower levels of male mediocrity, while lambdas — gay men — have their particular dynamics to figure out. The omega tier encompasses a pool of abject losers.

The sigmas, meanwhile, are “the lone wolves.” This is the persona Day claims for himself. In a follow-up post, he elaborated: “The outsiders who don’t play the social game and manage to win at it anyhow,” who are able to score a “tier one girl” without the aggro posturing of the Chad/alpha bro. “Sigmas often like women, but also tend to be contemptuous of them,” he added, as if worried mere objectification wasn’t sexist enough. 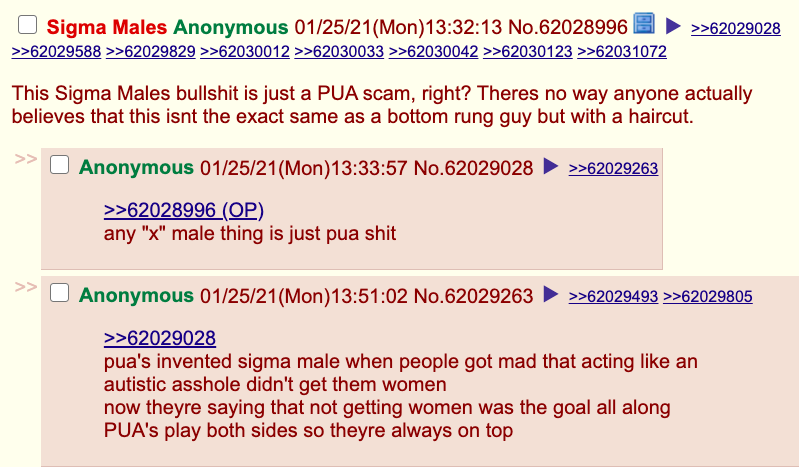 While the gist of Vox Day’s dude scale was quickly assimilated into pickup artist, red pill, incel and MGTOW ideologies, the sigma element remained more obscure. Years passed before anyone attempted to build a channel or brand on it. California plastic surgeon John Alexander took what looks to be the first stab in 2013-2014, advertising his book The Sigma Male: What Women Really Want on Twitter and Tumblr; as of 2017, the volume was in its third updated edition (but still has just a dozen reviews on Amazon, including one from an irate reader who accuses Alexander of slapping the word “sigma” on a dating guide that doesn’t even broach the topic).

Far more sigma content cropped up in the period spanning 2018 to present day, and it has finally surfaced in areas where it’s more likely to be mocked than accepted at face value. Here’s a representative parody of the long-simmering and now budding trend:

So, that’s the history — but why the need to invent and perpetuate this sigma thing?

Fundamentally, it’s no different than trying to understand oneself through the organizing filters of zodiac signs, Myers-Briggs types, Enneagram numbers or Hogwarts houses. We want to know ourselves better, and, guided by our prejudices, we seek that knowledge through a select framework of assigning (and in this case grading) personality. Of course, this process tends to result in attaching to the archetype you find most favorable, which explains why there’s a lot of weird gatekeeping around the sigma title: It has to be uncommon if it is to hold any power, yet every dork will want to claim he belongs to this group.

“Proclaiming to anyone that will listen on a YouTube comment that you are a sigma is a feminine thing to do,” pickup artist Steve Jabba has sneered on his blog, complaining about the replies to his sigma male explainer videos. “Understand: No one cares what you think you are. It’s of no interest to anyone but yourself.” 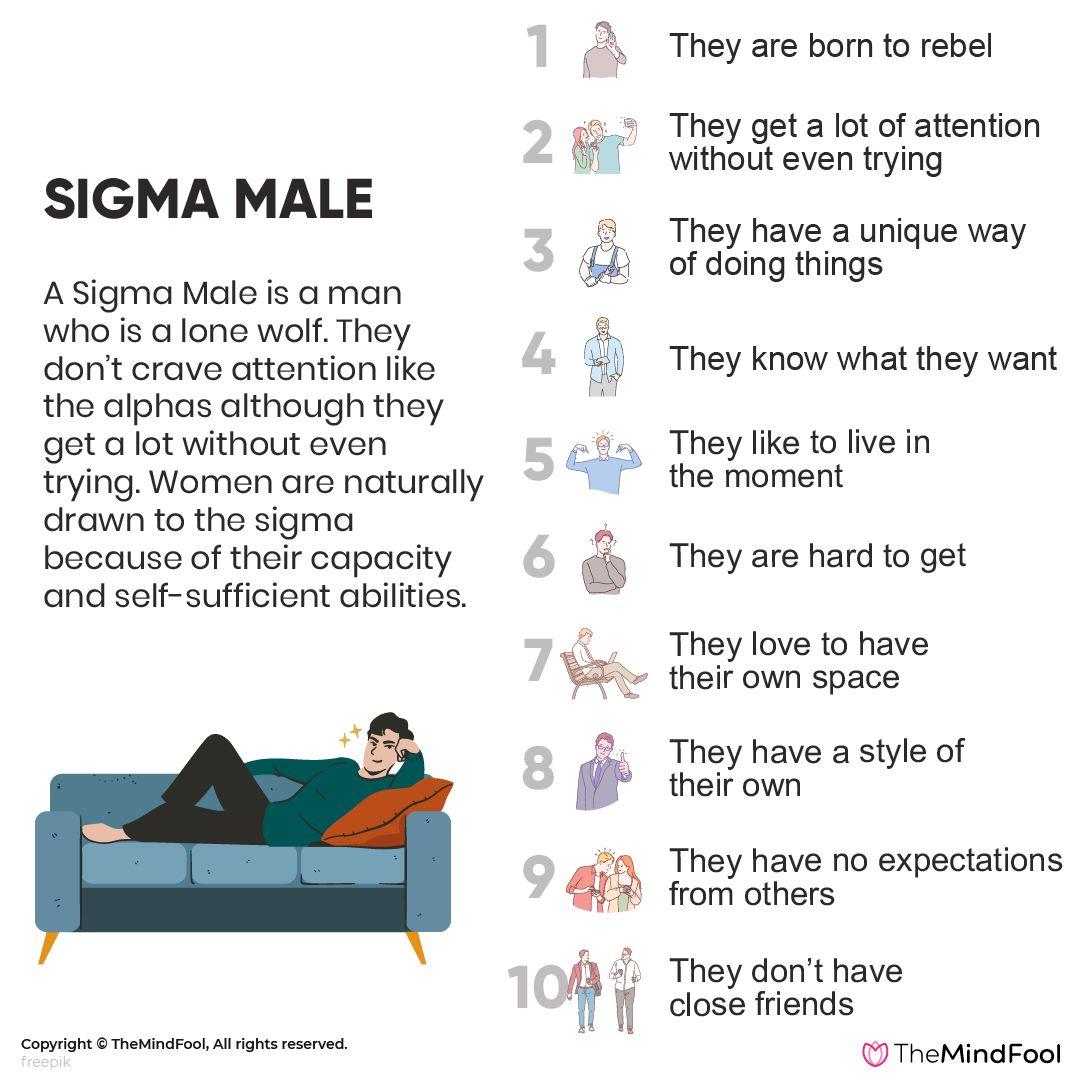 This unresolvable friction — you have to realize your place on the ladder, but you are delusional if you put yourself outside and above it — is probably why the sigma offshoot has not achieved saturation. By providing an asterisk to the core dogma of dominance, it allows men to reframe antisocial tendencies as power rather than weakness. Texts like The Sigma Male Codex: Rules for the Sigma Male are ultra-flattering to the presumably sigma reader, telling him that he’s a deeply intelligent and effortlessly attractive guy… because he’s “the quietest man in the room,” “keeps a wall built up around him to keep certain people out and “would never dream of hanging out with a large group of males.”

It’s introversion and inaction rebranded as mysterious cool — the rōnin forging his path alone — whereas the rest of us see a loser who should get a life. Comparing yourself to John Wick, an action-movie assassin with a dead wife and the entire underworld trying to murder him for the full length of the franchise, shows a warped perspective at minimum.

In his heart of hearts, the red-pilled man doesn’t actually want to be an alpha. It’s too much bro performance, too many hours in the gym and at the office, too basic a profile. Therefore, he creates the inner world of the sigma — he is a unique and fearless Übermensch in his mind, and whether reality conforms to this projection is immaterial, as he can always convince himself it does.

You’d think that a sigma, allegedly uninterested in social class and convention, wouldn’t be this consumed with proving his freedom from these limitations; indeed, you might say that a true sigma is the man who has never heard of any of this cringe bullshit, as he’s happily off hiking in the desert or making experimental art or straight up fucking, and couldn’t possibly care besides. To judge by the internet, however, a sigma is a guy who huffs his own farts until they start to smell like transcendent wisdom, then tries to market this narcissism to the same pretentious twerps who were calling themselves “sapiosexuals” not long ago.

You can spin up as many appellations as you like, but in the end, you’re gonna get dunked on all the same.