Ranking Hard Seltzers by How (Un)Healthy They Are

White Claw? TRULY? Ficks? Which will keep me slim while I enjoy my seltzer-induced immunity from the law?

In 2018, Juul captured the hearts and devastated the lungs of American teenagers through a combination of misleading and outright illegal health-motivated branding and inescapable social media influence.

In 2019, hard seltzer brands have done something similar, touting low calorie counts and encouraging the spread of dank memes that promote their products. In truth, though, alcohol in general — hard seltzer, included — is exceedingly fattening and intensely damaging to your liver.

That said, hard seltzer does have the potential to be a relatively low-calorie alcoholic beverage, one that contains fewer carbohydrates than your average beer and has a lower alcohol by volume than your average wine. “Compared to a similar percentage beer, a hard seltzer will have fewer calories, because the alcohol seems to come from a harder liquor than the alcohol in beer — hard liquors are essentially carb-free, which means fewer calories,” says Dana Hunnes, senior dietitian at the Ronald Reagan UCLA Medical Center. “In that sense, yes, hard seltzers could be less ‘fattening.’ However, given the flavors and the way they’ve been advertised, because they sound healthier and have fewer calories, people might think they can drink more of them without repercussions. Given most of their alcohol contents, one can would be like drinking one standard drink. So if someone were to drink one quickly, then another and another because of the taste and ‘health appeal,’ that could be dangerous.”

Hunnes also shared another downside about seltzer in general during our recent ranking of waters: “These aren’t as healthy as flat water because the carbonation makes it acidic and could potentially increase tooth enamel demineralization (loss of tooth enamel).” On the bright side, though, seltzer does provide some hydration, which is important when boozing and has the potential to help proactively prevent hangovers, at least somewhat.

Now, because of the recent hard seltzer boom, hordes of hopeful spiked seltzer entrepreneurs have been releasing their own take on the boozy beverage that could invoke the end of society. And considering the proposed health advantages associated with these many hard seltzers, I asked Hunnes to help me rank a whole bunch of brands by how unhealthy they are (remember, these are not healthy). But the fact is, hard seltzers are pretty much all the same. “They’re too similar to rank,” Hunnes explains. “The major differences — if you can call them major — are alcohol by volume, sugar content, which is low for most, and calorie counts, which isn’t that different for most, ranging from about 80 to 110 calories per hard seltzer

Still, I went ahead and ranked them by their extremely insignificant differences — from unhealthy to unhealthier — so everyone can argue about how their beloved hard seltzer is better or worse than the others. Here you go, folks. 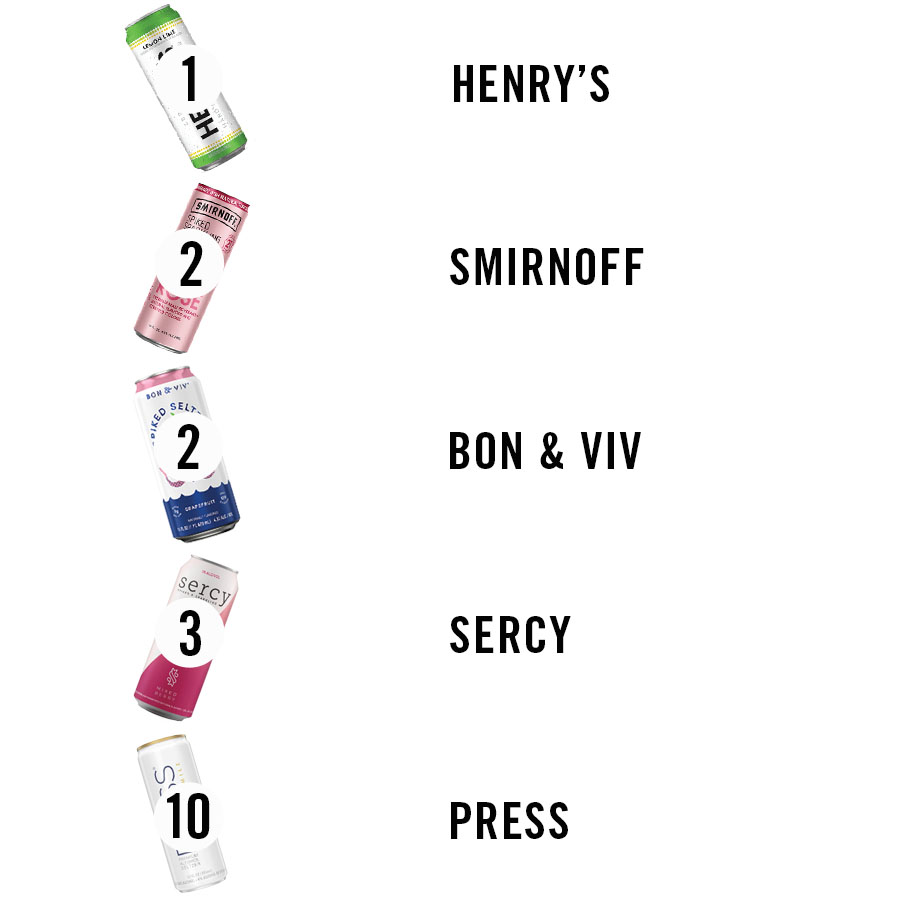 1) Henry’s Hard Sparkling Water: This hard boi has 88 calories, no sugar and 4.2 percent alcohol by volume.

2)  Smirnoff Seltzer Four Ways to Rosé and BON & VIV Spiked Seltzer (tied): Both of these have 90 calories, no sugar and 4.5 percent alcohol by volume.

7) TRULY Hard Seltzer: This beverage truly has 100 calories, one gram of sugar and five percent alcohol by volume.

8) Nauti Hard Seltzer: You can find 100 calories, one or two grams of sugar (depending on the flavor) and 4.5 percent alcohol by volume in this naughty seltzer.

There you go, seltzer fans. As a quick aside, you could also consider making your own hard seltzer, which, depending on what you put in it, may or may not be healthier than the options listed above.

Sounds like I reached my maximum for the month over the course of writing this article, then. So please let me be while I fall out of my chair and pass out on the floor for the next 16 hours.