Ranking Crash Diets by How (Un)Healthy They Are

South Beach? Atkins? Intermittent Fasting? Which will help me reach my weight loss goal so I can inevitably gain it all right back?

I wined (mostly on vodka) and dined (mostly on ham) my way through the holidays, and now that resolution season is upon us, I guess I should start caring about my appearance and general health again. Fortunately, there are a bunch of crash diets out there that promise quick weight loss — exactly what I need right about now. Question is, which one should I follow?

For guidance, I asked Dana Hunnes, senior dietitian at the Ronald Reagan UCLA Medical Center, to help me rank an assortment of crash diets by how healthy and effective they are — from super practical to even worse than subsisting on vodka and ham.

But before we leap into the ranking, I should mention that, sadly, crash dieting is largely a giant scam. “I don’t really believe in crash dieting,” Hunnes says, “since it generally provides quick, ‘unhealthy’ weight loss, and when the person is done dieting, they often gain the weight back, plus more, and are less healthy than when they started.”

As with just about anything worthwhile, weight loss and good health are achieved through sustained healthy eating and exercise, not a weeklong cleanse that brings you to the brink of starvation. In fact, as Traci Mann, a psychology professor at the University of Minnesota who’s been studying eating habits, self-control and dieting for more than 20 years, explained to the Washington Post, “dieting is bound to fail.” This is because, as she says, suddenly depriving yourself of certain foods and set amounts of calories rewires your brain to crave food even more, incites hormonal changes that make you feel hungry more often and prompts biological changes that slow down your metabolism, which makes shedding weight even more difficult.

For those reasons, Hunnes emphasizes that her ranking is based on diets that are healthy to begin with and can be reasonably continued in the long-term, where real change can be achieved.

Now, let’s take a look at the diets — from the healthiest and most effective to downright dangerous. 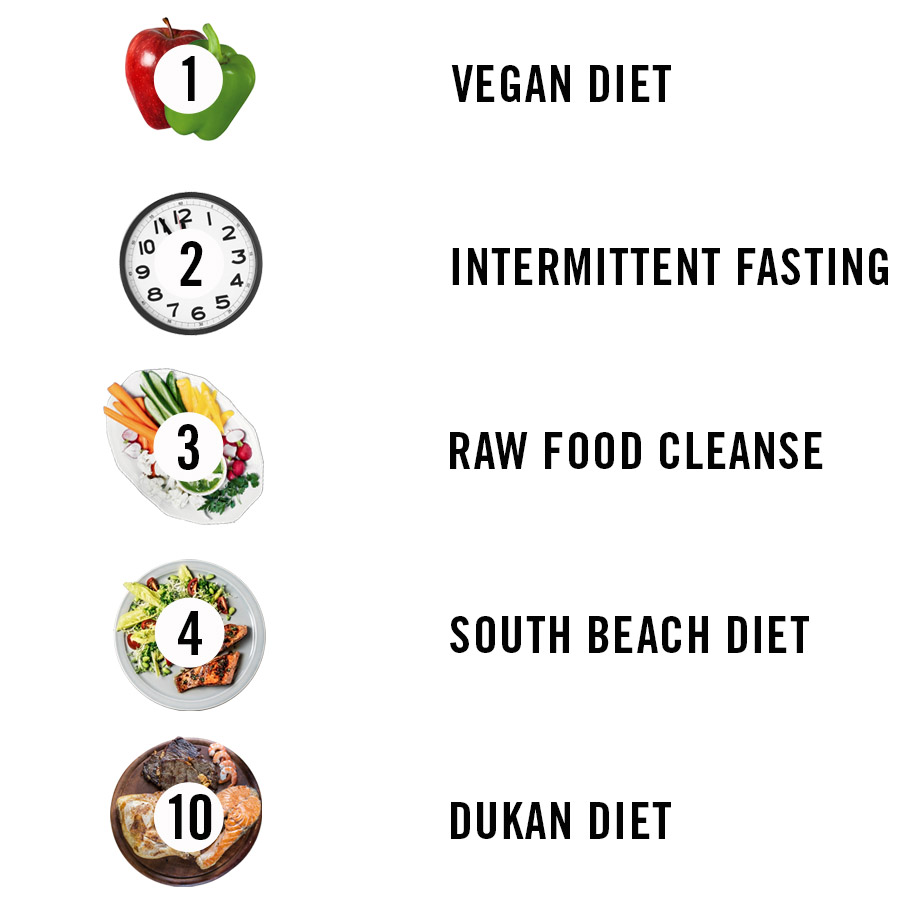 1) The Vegan Diet: The vegan diet, as anyone who’s been inside of a Whole Foods knows, consists entirely of only plant-based foods, such as fruits, vegetables, whole grains, legumes, nuts and seeds. According to Hunnes, as long as the vegan diet is followed by eating unprocessed whole foods, rather than enduring on countless Beyond Burgers, “It can be used for weight loss, chronic disease reversal and is, in the long-term, the healthiest.”

Research supports these claims, big time: I found 10 (one, two, three, four, five, six, seven, eight, nine, ten) studies that report vegan diets to be more effective for weight loss than other diets, and some of them show that vegans lose more weight than those on calorie-controlled diets, even when they eat as much as their vegan hearts desire. This could be because vegans tend to consume more dietary fiber, which can make you feel fuller, and therefore, cause you to eat fewer calories in general.

That said, vegans, particularly those inclined to survive only on French fries, need to be sure to get a good amount of variety in their diet and supplement any vitamins and minerals that they might be lacking — especially B12, which is normally found in animal products.

2) Intermittent Fasting: The idea behind intermittent fasting is that you restrict your eating to a period of, usually, eight hours each day, and then you fast for the other 16 hours. This diet makes sense for weight loss: The carbs that we eat are broken down into sugar, which is stored in our cells for energy and later stored as fat if that sugar goes unused. But sugar can only enter our fat cells with the hormone insulin, and when we avoid snacking in between meals, our insulin levels go down and the fat cells can release their stored sugar to be used as energy, rather than as an inner tube around our waist. In other words, theoretically speaking, intermittent fasting should allow our insulin levels to stay low for long enough to burn fat, and a decent amount of science (and anecdotal evidence) shows that to be true.

Hunnes agrees, but with a caveat. “It depends on how this is done,” she says. “If you do 16 hours of fasting with eight hours of eating generally healthy, whole, unprocessed foods, this will be very healthy in the long-term and may help with weight loss and disease reversal.” In other words, fasting works, but not if you use your eating period to have a fettuccine alfredo mukbang.

3) Raw Food Cleanse: This is basically a vegan crash diet that involves eating only raw foods, which means you can go ahead and turn off your gas for the month. While raw might sound healthy, especially with the abundance of over-processed foods we tend to consume, Hunnes has an important reminder. “We don’t really need to be eating raw foods, nor do we need to cleanse,” she says. “I’d just prefer that people do a vegan diet, including cooked foods — sometimes you get more nutrients from cooked than raw foods. But, there are definitely worse diets out there.” Speaking of which…

4) South Beach Diet: The South Beach Diet is a little complicated — there are several different phases, all of which have different restrictions — but the main premise is lowering the amount of carbs you consume and restricting certain types of fat. While numerous studies have shown that low-carb diets are effective for combating obesity and other related ailments — remember, carbs are often what encourage our bodies to put on blubber, and extra protein keeps us fuller for longer — as we’ve written before, they can be extremely difficult to follow, which as we explained earlier, can make or break a diet.

However, the South Beach Diet is relatively loose compared to some other low-carb diets, like Keto (more on that in a moment), which is why Hunnes gives it a pass. “Of the lower-carb diets, this one is probably among the healthier ones, since it does still allow for some carbohydrates,” she explains. Again, though, she recommends sticking to whole, unprocessed carbs, like vegetables, whole fruits, legumes, potatoes and whole grains.

5) The Zone Diet: Another meal plan that aims to cut carbs, the intensely-named Zone Diet encourages its followers to stick to eating a strict ratio of 40 percent carbs, 30 percent protein and 30 percent fat at every meal. Specifically, this diet purports to help your body enter a state called — you guessed it — “The Zone,” where inflammation can be kept under control. Again, you can see how such draconian measures might encourage someone who just wanted to lose a little weight to revert back to their old, unhealthy ways. Plus, not much evidence supports the claims made by this diet, especially those regarding the so-called “Zone.” Still, it might help you practice portion control and could certainly encourage you to make better choices — i.e., reaching for more whole, unprocessed foods.

6) Atkins Diet: Another low-carb diet, the Atkins plan is fairly complicated with several different phases and restrictions. Essentially, you can eat a lot of protein and fat as long as you keep your carbs low. While this might work for people who need to learn how to structure their eating, Hunnes is skeptical. “The initial period is very much like a ketogenic diet in that it’s very low carb,” she says. “I don’t advocate for this as a healthy diet in the least, and most of the initial weight loss will come from water and fluid loss.”

7) Paleo Diet: The Paleo Diet aims to emulate the diet of our hunter-gatherer ancestors and mainly consists of unprocessed animals and plants. However, Hunnes is quick to point out that cavemen didn’t have access to the abundant grocery store meat aisles we have today. “This diet actually has no basis in reality to what out Paleolithic ancestors ate — they were mostly gatherers,” she says. “With that said, this is probably still slightly better than the ketogenic diet, since it consists of unprocessed foods, but is still way too high in fat and protein.” The big problem with the Paleo Diet is that it relies too much on meat, which as we already know, is bad for your heart in large amounts. Still, if you can tweak this diet in the right ways to focus more on vegetables and the like, it could be an okay choice.

8) Keto Diet: The Keto plan is yet another low-carb, high-fat diet. Besides being hard to follow, another problem with low-carb diets is that people who consume fewer carbs also tend to consume fewer healthy vegetables and more unhealthy animal products. This is why, in regards to the Keto Diet, Hunnes says, “I have nothing good to say about it, really. Weight loss isn’t worth this diet.”

9) The 17-Day Diet: The 17-Day Diet is the epitome of crash dieting, as it claims to help you lose up to 12 pounds in 17 days. It does so by, essentially, restricting calories. While reducing calories will obviously induce weight loss, it’s also a perfect example of a quick-fix diet that will encourage your body to work against you. “I’m not sure what happens after the 17 days,” says Hunnes. “If you go back to what you were doing before, this is definitely just a quick fix and nothing for the long-term.”

10) Dukan Diet: The Dukan Diet is extremely complicated, consisting of several different phases depending on your initial weight, eliminates lots of healthy foods, such as avocados and nuts, and basically boils down to eating loads of proteins and not many carbs. “I wouldn’t recommend this for anyone’s kidneys,” Hunnes emphasizes (too much protein can cause kidney problems, like kidney stones). “Overall, this isn’t a safe diet either.”

All in all, if you want to make healthier choices in the New Year, stick to the basics: Practice portion control, eat plenty of fruits and vegetables and run around outside every now and again. If you can keep to that, you’re much more likely to improve and maintain your long-term health than by going on a weeklong cleanse, reaching the brink of death and then binging on McDonald’s.