Ranking Christmas Decorations by How Terrible They Are for the Environment

The tree? The lights? The wrapping paper? Which is mostly likely to destroy the world so we can never have Christmas ever again?

Ah, Christmas, a time for celebrating loved ones and showing gratitude. Also, a time for mindless consumerism and generating enough waste to call it quits, declare that Earth has become one giant landfill and transport any survivors to a new solar system, where they can repeat this process over and over again until the whole universe has become a monstrous junkyard and life can no longer endure.

Since the earth is clearly spiraling toward death by waste and pollution, I asked Dianna Cohen, co-founder and CEO of the Plastic Pollution Coalition, to help me rank various Christmas decorations and other jubilant goodies by how damaging they are to the environment — from super green to world destroying.

Starting with the least-worst, let’s get festive… 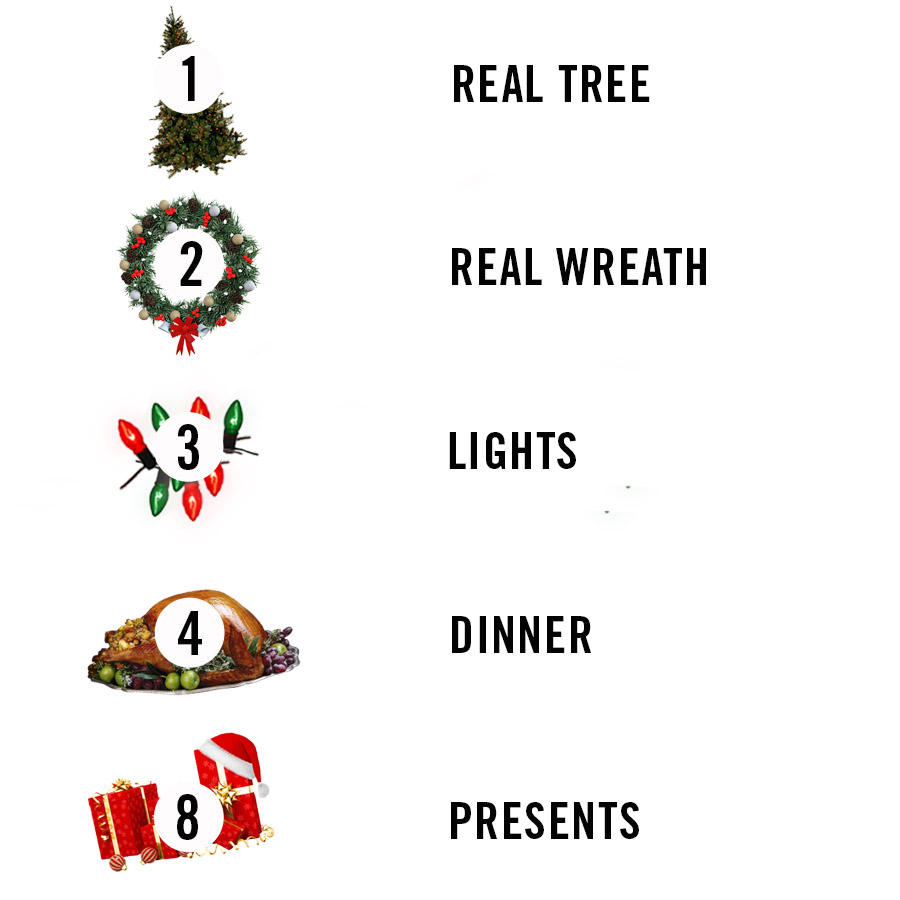 1) Real Christmas Trees: It might surprise you to learn that the chopped-down tree is actually the most environmentally friendly part of your whole Christmas. Up to 30 million real Christmas trees are sold in America each year, a figure that may lead you to believe that painfully dragging one into your home contributes to mass deforestation and environmental degradation, but realistically, a remarkable number of Christmas trees are grown on farms, just like many other sustainable crops.

Furthermore, loads and loads of Christmas trees are recycled. New York City, for instance, amasses thousands of trees for MulchFest each year, and then uses the resulting mulch to enrich the soil in public parks. Some areas also use junked trees to prevent beach erosion or drop them into lakes to create festive habitats for some lucky aquatic creatures. That being the case, as John Kazer of the Carbon Trust explained to the Guardian, a real tree that has been recycled can actually have negligible or even negative carbon emissions. One that ends up in a landfill, however, will have a small carbon footprint, because the tree will eventually decompose and produce methane gas, which contributes to global warming.

For the absolute best environmental impact, Cohen suggests renting a living tree, where tree farmers essentially lend you a tree for the holidays, then come pick it up and replant it when the celebrations are over. Just try not to kill the tree in the process, or else you might have to pay extra (and feel bad about killing a tree).

2) Real Wreaths: Artificial wreaths are made from plastic and other petroleum-based products, which contribute to pollution, acid rain and various illnesses in humans, including numerous cancers. This, of course, makes them particularly awful for the environment, especially if you idiotically chuck your manufactured wreath in the ocean every year, then buy another one the next year and the next year and the next year.

However, much like real Christmas trees, real Christmas wreaths are a renewable resource clipped from the branches of pines that ultimately grow right back. Moreover, as Cohen says, “You can make a wreath out of anything.” Hell, collect some leaves and herbs from your backyard and nail them to your front door. “I’ve seen people make wreaths out of washed-up plastic pollution,” Cohen adds, which is one way to clean up the world and celebrate the holidays at the same time. “Whatever floats your boat.”

3) Christmas Lights: As anyone who lives in a city or has neighbors who get a little too excited for the holidays knows, people go wayyyy overboard with Christmas lights. On one major street in London alone, the city hung 750,000 fucking light bulbs in 2017 to celebrate Christmas, and the lights went up months before the actual holiday. NASA, meanwhile, has shown that parts of the Earth are up to 50 percent brighter during the weeks between Thanksgiving and the end of December, and suburbs in America, where I imagine most of those wildly festive neighbors reside, are where some of the biggest differences have been noted.

Of course, all of these extra lights increase carbon emissions from power stations, and light pollution disrupts ecosystems of nocturnal wildlife. Plus, excessive lighting at night suppresses your melatonin production, potentially interrupting your sleep schedule, is a “potential risk factor” for breast cancer and has been linked to obesity. So you can maybe blame the lights a little, even though you had four servings of holiday ham.

All that said, University of Toronto professor Danny Harvey, who studies energy efficiency, told Global News that most modern Christmas lights — which use LED light bulbs that require much less energy and even reduced carbon emissions by 570 million tons in 2017 alone — “aren’t too damaging for the environment anymore.”

Still, some of these light bulbs contain dangerous chemical elements that can be extremely harmful if you carelessly throw them away, resulting in them ending up in landfills, so be sure to dispose of them in the right ways. Or better yet, reuse them as much as you possibly can. “Christmas lights are good, particularly if you take care of them and use them for a number of years,” says Cohen. Or perhaps even better, send them to China, where they can be recycled into slippers (no, really).

4) Christmas Dinner: Food, particularly meat, is a huge contributor to the global carbon emissions that are warming our planet, and a traditional Christmas dinner is a perfect example of that. Researchers found that a festive dinner of roasted turkey, meat stuffing, meat gravy, roasted potatoes and pigs in a blanket costs a total of 23.5 kilograms of carbon dioxide, the same amount produced by driving 78.5 miles.

Cutting down on the meat, however, is a fantastic way to reduce the meal’s carbon footprint: The same researchers found that a dinner made up of roasted nuts, vegetarian stuffing and gravy, roasted potatoes and vegan pigs in a blanket produces only 9.5 kilograms of carbon dioxide, or the equivalent of driving 31 miles. That at least kinda makes up for the fact that you had roasted nuts for Christmas dinner, right? (Just pretend that it did — y’know, for the Earth).

Furthermore, Cohen suggests making your Christmas dinners as zero-waste as possible by using reusable plates and utensils, rather than paper or plastic, as well as linen and cotton napkins, and avoiding purchasing foods that have an unnecessary amount of plastic wrapping, like these insane pre-peeled, plastic-wrapped bananas.

5) Fake Christmas Trees: Fake Christmas trees are surprisingly polarizing. On one hand, manufacturers claim that real trees are worse for the environment if you use an artificial tree for five or more years, arguing that tossing actual trees in landfills every year has a bigger impact on greenhouse gas emissions, water and energy use than a reused artificial tree does.

Others argue, however, that the disposal of artificial trees have more negative impacts, even if you kept the tree for 10 years or more. This is because most fake trees are made of polyvinyl chloride (PVC), a plastic notorious for being near impossible to get recycled because it requires special equipment. Moreover, the numbers show that an average-sized artificial tree has a carbon footprint equivalent to about 40 kilograms of greenhouse gas emissions, or more than twice that of a real tree that ends up in a landfill.

Furthermore, Cohen says, “I’d question the science of what these plastics are made from — the carbon sources are mainly byproducts of petroleum and natural gases — and then the additives, which are phthalates and bisphenols, chemicals that have been identified as endocrine disruptors. There’s potential, if you put hot lights on a plastic tree, to have it put off gas that might not be that healthy.” Crap.

6) Wrapping Paper, Boxes and Gift Bags: Last year, Americans spent a whopping $12.7 billion on gift wrap — including wrapping paper, tissue paper and gift bags — according to an August report from Sundale Research, which, what a Goddamn waste. Most wrapping paper can’t be recycled, either, so it ends up in landfills, which are quickly consuming what little empty space we still have left on our planet. To that end, one English report claims that more than 226,800 miles of wrapping paper are tossed during the holidays, which is enough to wrap around the planet nine times.

Worse yet, the environmental organization Greenpeace found that as little as 2.2 pounds of wrapping paper emits about 8 pounds of planet-warming carbon dioxide during its production process, requiring another 3 pounds of the pollutant coal to power that production.

Again, though, there are friendlier alternatives to single-use wrappings. “Newsprint is a good substitute for wrapping paper and can be easily recycled,” says Judith Enck, the current senior advisor at the Institute for Governance and Sustainable Development who served as regional administrator of the Environmental Protection Agency under President Obama. Cohen adds, “I make things out of the brown paper from bags at the market. I also like the idea of just wrapping something up in a vintage scarf or some fabric.” It might look a little makeshift, but hey, the world is facing imminent death, man, c’mon.

7) Fake Snow and Tinsel: “Obviously, fake snow is really bad,” Cohen says. “The fake snow, I think, is made out of finely ground polystyrene, and polystyrene has been identified as a possible human carcinogen. Obviously, it’s an environmental pollutant that appears to last forever, so I’d encourage people to think reusable decor over disposable.” Tinsel, meanwhile, is again made from PVC, which as we already know, is incredibly difficult to recycle, and according to Greenpeace, is equally toxic and poses a danger to both humans and wildlife.

8) Presents: Perhaps the absolute most environmentally devastating aspect of Christmas is the fact that we buy so much crap to give each other. Fast fashion is horrible for the environment, plastic toys are terrible and the plastic packaging on pretty much everything nowadays is awful, too. Not to mention, clamshell packaging sends thousands of people to the emergency room for lacerations and puncture wounds every single year (WTF!!!).

Cohen recommends, “What we’ve really been encouraging people to do is to buy less, but when you’re thinking of other people, think of gifts for them that have to do with spending time together or doing something.” Maybe some concerts tickets would be a good gift!