Ranking Canned Meats by How (Un)Healthy They Are

Tuna? Sardines? Spam? Which will keep me alive and healthy in my coronavirus bunker when the world ends?

Climate change continues to force its filthy, polluted hands around the necks of Earth and its people, and since our world leaders refuse to listen, now seems like as good a time as any to start working on stocking your doomsday/coronavirus bunker. And what better way to do just that than by hoarding a whole bunch of canned meat, since we can go ahead and kiss fresh, living animals goodbye?

Then again, what good is a doomsday bunker if the only food you have is going to result in a quick case of heart disease, diabetes or any other form of general malnutrition that will inevitably result in a prompt and painful death? No good! So I asked Dana Hunnes, senior dietitian at the Ronald Reagan UCLA Medical Center, to help me rank a whole bunch of canned meats by how unhealthy they are — from “could keep you alive and well in a bunker” to “I should have just gone extinct with the rest of the animals.”

First, though, a quick lesson on why canning keeps things from spoiling: What happens is, the food is exposed to high temperatures, either before or after the can is sealed, to kill all the bacteria. Then, since the can is airtight and the food in the can is completely sterile, it simply doesn’t spoil (for a good couple of years, at least).

Unfortunately, that extreme heating process also negatively affects the taste, texture and sometimes — but not always — even the nutritional value of the food. But the world is ending, so canned food is our only option, and we’re just going to have to roll with it. 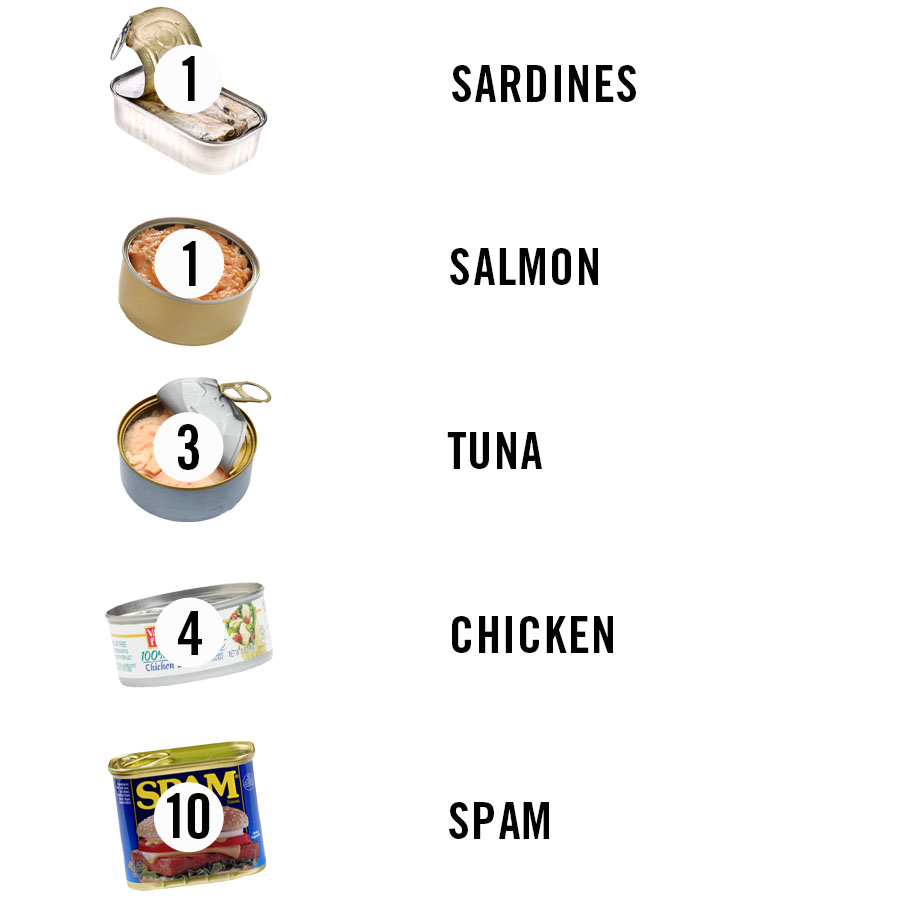 1) Canned Sardines and Salmon (tied): Hunnes says these are the healthiest of the bunch, “since they rarely have too much added sodium, unless the sardines are in a sauce, and they at least have healthy omega-3s in them.” One can of Bumble Bee sardines has 310 milligrams of sodium, and one can of StarKist salmon has 200 milligrams, neither of which are that much — the American Heart Association recommends consuming no more than 2,300 milligrams per day, and in an ideal world, most adults should have no more than 1,500 milligrams. Omega-3s, meanwhile, help prevent heart disease.

Hunnes does have one caveat, though. “There’s a lot of plastic in the oceans, and that makes me wary of any fish,” she says. Looks like even after we escape from our broken world, we can’t escape from constant reminders of how we broke it.

3) Canned Tuna: Hunnes says canned tuna comes next, because it’s “frequently saltier than sardines and salmon [although, not in the case of StarKist tuna, which only contains 180 milligrams of sodium], and depending on the type of tuna, would have more mercury and plastic residue than other fish. The largest species of tuna tend to have more of these toxins accumulate in them — chunk lite is usually safest.” See, tuna is a predatory fish, and it collects mercury, plastic and toxins from the various other fish in its diet. The good news is that tuna, much like sardines and salmon, is high in omega-3s.

4) Canned Turkey and Chicken Breast (tied): According the Hunnes, canned turkey and chicken come next, since they tend to be low(ish) in sodium, could have less heart disease potential than red meat and boast “at least a bit of a healthier nutrient profile than the next round of items.”

For instance, nutritionist David Friedman, author of Food Sanity: How to Eat in a World of Fads and Fiction, once told me that turkey is the healthiest part of a Thanksgiving spread. “Rich in protein, potassium [which supports our muscles], zinc [which supports the immune system] and niacin [which helps the body convert food into energy], turkey gets the number one spot as the healthiest pick for a Thanksgiving meal,” he explained. “Turkey is also an excellent source of B12, which helps prevent the buildup of homocysteine, an amino acid that may decrease cognitive function — in other words, eating turkey makes you smarter.”

Chicken breast, meanwhile, is a solid source of selenium (which protects against free radicals), phosphorus (which supports bones and teeth), vitamin B6 (which helps the body metabolize proteins, carbs and fats), and again, niacin. So all things considered, canned turkey and chicken are okay bets.

6) Canned Beef: Canned cow is next on our list, according to Hunnes, simply because it’s the “least processed of the remaining items, but beef isn’t particularly healthy by any means, and it’s not so great for the environment, either.” Good thing the environment will be over and done with by the time you’re eating this stuff!

The big downside with beef (and red meat in general), as we’ve already been over, is that it’s high in unhealthy fats, which can raise cholesterol levels, which can then result in your heart quitting on you. On the plus side, one 14.5-ounce can of beef contains a whopping 88 grams of protein, although a single serving size is a laughable two ounces, which would then only sport 11 grams. You should probably stick to the serving size, too, since chowing down on the entire can would result in you taking in 960 milligrams of sodium.

7) Canned Roast Beef Hash: This is similar to canned beef. “It has a ton of sodium in it [990 milligrams per can] and again, not so great for health (red meats are more dangerous than white meats) — also, not so good for the environment,” Hunnes says. Each can also comes with a sprinkling of diced potatoes, though, which provide a good form of carbohydrates and can give you some much-needed energy while you sit around in your bunker, wishing the world leaders would have done something in a timely manner so you could go outside.

8) Canned Bacon: Next up, Hunnes says canned bacon “has less sodium than some of the other remaining items, but it’s a processed meat with likely carcinogens in it. All processed meats are considered class I carcinogens by the World Health Organization.”

The ingredients behind this canned bacon being dangerous and carcinogenic? Sodium phosphates, sodium erythorbate and sodium nitrite. At least one study suggests phosphate additives contribute to the prevalence of chronic kidney disease, and if you’re sensitive to sodium erythorbate, you may experience side effects like headaches, dizziness, fatigue, lethargy and body flushing. Sodium nitrite, meanwhile, is arguably the worst, since it can result in the formation of small amounts of nitrosamines, which are known carcinogens.

9) Canned Vienna Sausages: Put bluntly, Hunnes says these contain “much more sodium, are a processed meat, are carcinogenic and aren’t good for you in the least.” Damn, son. Again, we also see sodium erythorbate and sodium nitrite in these tiny Johnsons, so maybe just steer clear.

10) Spam: “The original ‘canned’ meat, Spam is processed, salty and carcinogenic,” Hunnes says. “Again, not good for you at all.” Yet again, Spam has sodium nitrite in it, and as I concluded in my recent exploration of the ingredients in this canned pork cube, “Spam is loaded with carcinogenic meat, brimming with sodium and laden with a preservative that could have deadly side effects. Moreover, Spam boasts virtually zero important vitamins and minerals.”

Welp, that’s about it. Sad, I know, but hey, maybe if we send this article to world leaders and they see how horrible eating will be when climate change finally ends the world, they’ll actually do something about it. Remember, Trump, even McDonald’s needs real cows to put together a Big Mac.