Ranking All Kinds of Gourds by How Healthy They Are

Butternut Squash? Zucchini? Pumpkin Spice? Which will best help my insides recover from all that candy corn?

The seasons are a-changing, the leaves are a-falling and I can finally start a-butchering a pumpkin on my front porch without my neighbors calling the police (leave me alone, Tom). Besides making spooky Halloween decorations and organic Thanksgiving centerpieces, though, gourds of all shapes and sizes deliver a substantial dose of healthy nutrients, too.

Since there are so many kinds of gourds — pudgy, elongated and otherwise — I asked nutritionist David Friedman, author of Food Sanity: How to Eat in a World of Fads and Fiction, to help me rank a whole bunch of them by how healthy they are, from superfood to decoration material.

So put down the knife and pick up the fork, because that gourd might be the healthiest snack you get your hands on all day. 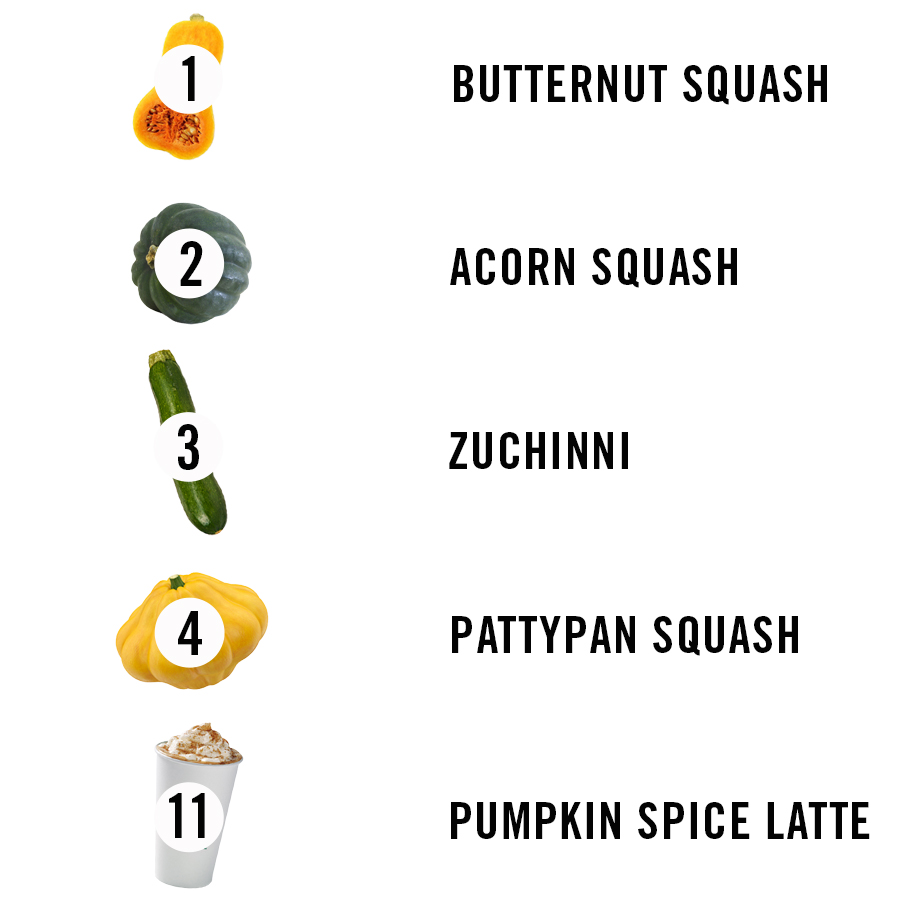 1) Butternut Squash: Squash in general deliver an impressive assortment of health benefits, according to Friedman, including cancer prevention and improved vision, as well as diabetes management and enhanced heart health. “Squash gets its distinctive color from carotenoids, like beta-cryptoxanthin,” he adds. “This plant pigment contains powerful antioxidants, which research shows could reduce your risk of developing arthritis and other inflammatory conditions.”

Butternut squash in particular, though, is of the winter squash variety, which Friedman says offer decent sources of vitamins A and C — which enhance your vision and immune system, respectively — as well as iron and riboflavin, both of which help the body produce sustained energy. As a tip, Friedman suggests sprinkling pumpkin seeds onto your butternut squash soup, since they contain a burst of nutrients and can improve your heart health.

2) Acorn Squash: Another winter squash, acorn squash offers many of the same benefits as butternut squash, although perhaps to a slightly lesser extent. “It has a sweet, yellow-orange flesh inside and is most commonly prepared baked, sautéed or steamed,” Friedman says. “It offers a slightly buttery and sweet taste, similar to pumpkin but a bit more sugary.”

3) Zucchini: Zucchini is a summer squash, and while it has some of the same benefits as winter squashes, they generally come in less abundance. Also, as Friedman hinted at earlier, more colorful squashes tend to have more healthy carotenoids than the likes of the green zucchini. That said, per Friedman, summer squashes are generally a good source of niacin, which can lower cholesterol, ease arthritis and boost brain function.

The real nice thing about zucchini, though, is just how multifunctional it is. “If you’re wanting a low-carb alternative to potatoes and pasta, zucchini is a great option,” Friedman says. “Spiralizing makes it easier to get your daily requirement of vegetables, and it’s something fun to do with your children — and a great way to get their faces away from their electronics.”

4) Pattypan Squash: Another summer squash, the pattypan squash is nutritionally similar to the zucchini, with several variations. “Pattypan squash comes in yellow, green and white varieties, which can be sliced, baked, coated and fried until golden brown or boiled,” Friedman says.

Sugar pumpkins are much smaller than the pumpkins we usually carve for Halloween (more on them later), but they provide a much denser array of nutrients and contain a thicker, more appetizing flesh. “The large jack-o’-lantern pumpkins you buy for Halloween are perfect for carving,” Friedman says. “However, while technically safe to consume, these aren’t ideal pumpkins to eat.” That’s mainly because the walls are much thinner and grainier than with smaller pumpkins, like sugar pumpkins.

Healthwise, pumpkins in general — sugar pumpkins included — do the body good. “Ironically, we carve pumpkins into all sorts of scary faces, but in reality, they’re more like big, sweet orange smiley faces for your whole body,” says Friedman. “Pumpkin offers a great source of health-enhancing potassium, which aids in controlling high blood pressure. It also contains beta-carotene, which your body turns into vitamin A, needed for a healthy immune system, eye health, skin and mucous membranes. Research shows that vitamin A can strengthen the immune system and help fight infections, too.”

“Pumpkin also contains the antioxidants alpha-carotene, beta-carotene and beta-cryptoxanthin, which may protect your cells against damage done by free radicals,” Friedman continues. “Pumpkin is high in antioxidants, too, which may prevent (bad) LDL cholesterol from oxidizing, decreasing arterial wall clumping and reducing the risk of a heart attack.”

6) Spaghetti Squash: Another winter squash, spaghetti squashes boast a decent assortment of health benefits, similar to other winter squashes, and make a particularly good alternative to actual spaghetti. “Spaghetti Squash comes in a variety of shapes, sizes and colors — including ivory, yellow and orange — with orange having the highest amount of beta-carotene,” Friedman says. “When it’s cooked, it resembles spaghetti noodles, which makes it a healthier and gluten-free alternative to pasta. Top it with your favorite homemade pasta sauce and serve it with your favorite chicken parmesan recipe.”

7) Cheese Pumpkin: While larger and perhaps slightly less nutritious than sugar pumpkins, cheese pumpkins are quite healthy, too. “Also known as a Long Island Cheese Pumpkin or Cinderella pumpkin, the only thing cheese-like about this pumpkin is its wide, cheese-rind appearance,” Friedman explains. “Inside this delicious variety of squash, you’ll find smooth, dense meat, perfect for baking, roasting, stewing or even for turning into custard. Cheese Pumpkin is also considered by many chefs as the best option for making pumpkin pie.”

One of the great things about pumpkins in general is their ability to keep you full without too many calories. As Friedman explains, pumpkin contains 94 percent water and has less than 50 calories per cup. “Being a great source of fiber,” he adds, “pumpkin can help to suppress your appetite, too.”

Buying canned pumpkin is fine — and much, much easier to deal with — but Friedman suggests checking the label to make sure there aren’t too many additives. “Not all pumpkins sold in a can contain 100-percent real pumpkin,” he explains. “Many of them are chock-full of additives, binders, fillers and lots of sugar.”

8) Kabocha Squash: Yet another winter squash, kabocha squash comes from Japan, and again, is mostly comparable — but maybe slightly less nutritious — to many other winter squashes on this list. “Kabocha has an exceptional sweet flavor, even sweeter than butternut squash,” Friedman says. “It’s similar in texture and flavor to a pumpkin and sweet potato combined. Some kabocha can taste like russet potatoes or chestnuts.”

9) Delicata Squash: A cream-colored winter squash, “As its name suggests, it has a characteristically delicate rind,” Friedman says. “Smaller than most varieties, delicata has a sweet flesh and a thin skin that’s perfectly edible. You can cook this squash without peeling off the skin and then roast it, slice it, sauté it or blend it.”

10) Carving Pumpkins: There are a whole assortment of pumpkins we carve into jack-o’-lanterns — racer pumpkins, zeus pumpkins, hobbit pumpkins, gold rush pumpkins, the list goes on and on. Since these pumpkins are bred specifically for carving, they often lack the thick, nutritious flesh that comes in the likes of sugar pumpkins, and instead have thinner walls and a woodier, stringier texture, as Friedman pointed out earlier.

11) Pumpkin Spice Latte: Okay, a pumpkin spice latte isn’t a gourd, but it was (kinda) based on one. “Unfortunately, unlike the other pumpkin options on this list, there’s nothing healthy about this beverage,” Friedman says. “In fact, there’s been major media coverage and viral social media posts on the unhealthy coloring, preservatives and chemicals used to make it. Apparently, they forgot to add pumpkin to this latte.”

Well, there you go. Looks like the police are here, so my beautifully-carved pumpkin and I gotta run. Goddamnit, Tom.