The Fort Bragg favorite is likely the first and only OnlyFans girl to get creeped on by the most powerful military in the world. But that’s far from the full — and NSFW — story

On the evening of October 17, 23-year-old Quinn Finite, a Montreal-based OnlyFans creator, posted a naked photo to her Twitter account. Holding the phone below her waist just shy of her deep brown pubic hair to take a shot of her epic underboobs, she captioned the photo, “Your boner’s POV.” It was pretty standard Twitter fare for a porn model, but three days later, Finite got a surprise: The official Twitter account of Fort Bragg — the largest U.S. military base — had responded to her tweet. “My face’s, then my boner’s and then my face’s again before I come up to give you a deep long kiss,” it wrote.

Shortly thereafter, they replied to another of her tweets bemoaning a subscriber who complained about her pubic hair: “He’s lost and doesn’t know a good thing when it’s staring him in the eyes, or tickling his nose in this case,” said the home of the U.S. Army’s Airborne and Special Operations Command, with what I like to imagine was a gleeful, childlike giggle.

This, to be clear, was very odd. As anyone familiar with the U.S. military knows, it’s not a particularly sex-work-friendly institution, and prior to Finite, it had never wantonly thirsted after anyone on its social channels before. Finite’s fan base wasn’t particularly service-oriented at the time, either — though she later discovered that a few of her fans lived in the Fort Bragg area, why they chose her as an object of their uncharacteristic public affection was, and still is, a complete mystery.

That said, a tour of her OnlyFans may offer a clue. A bright and beautiful brunette with a natural allure reminiscent of an ingenue from mid-century French cinema, Finite oozes smart, girl-next-door energy. Her content is something out of a manic pixie dream-girl playbook that manages to pass the Bechdel Test, a self-described “personal sex diary” that she says “helps [her] learn how other people understand sex.” Having recently graduated with a bachelor’s degree in sociology and sexuality studies, she loves figuring out the little things that make her subscribers tick, leaning fully into their desire for voyeurism as if their kinks existed to satisfy her, not the other way around.

As such, Finite was already relatively established on OnlyFans before the Fort Bragg incident went down. Lured in by the platform’s promise of pandemic-safe cash and committed to the indoors thanks to an immunocompromised boyfriend, she’d amassed a modest following of about 700, and was sitting pretty on an income of roughly $7,000 a month.

The story was a viral hit. Within 72 hours of Fort Bragg’s big tweet, the story was circulating around news outlets, and by November, Finite found herself on the front page of Snapchat News. She was promptly interviewed on prominent YouTube channels and Twitch streams; meanwhile, The Military Times, Daily Beast and Business Insider reached out for interviews. To her surprise, the flurry of press ended up outing her to her friends and family. “My mom found me through the Business Insider article,” she says, explaining that it was actually a relief to finally come clean about her adult career. “She was cool about it, but that in and of itself was a shock.” Her father — a highly conservative guy — still doesn’t know, but as far as sex work coming-out stories go, Finite says being blasted by the U.S. military was “probably as much fun as she could have had with it.” 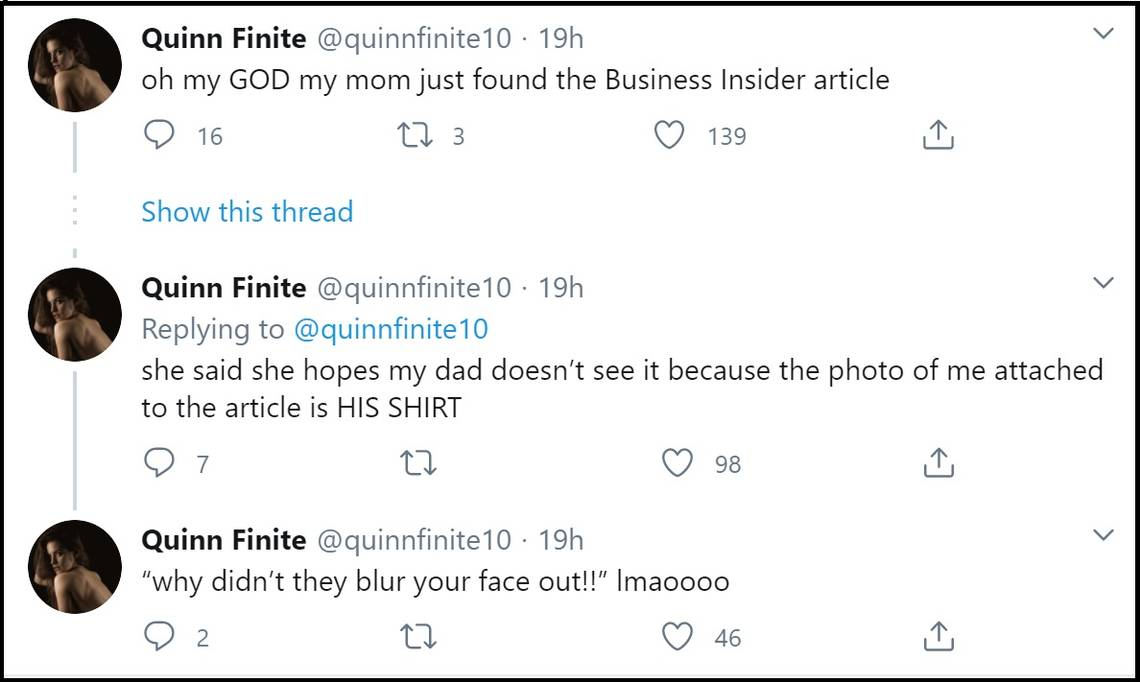 It was also very, very good for business. Finite’s subscriber count shot up from 700 to 4,500 almost overnight, boosting her monthly income to $35,000 and placing her in the top 0.14 percent of OnlyFans. But, as many of her new followers revealed in adoring DMs, it wasn’t just the hot pics they’d signed on for — they genuinely appreciated the way she responded to the situation. Lots of sex workers could have shamed Fort Bragg, called out the military’s myriad corruptions or used the incident as an excuse to highlight its long-standing love-hate relationship with prostitutes and porn, but instead, she’d opted to play along instead.

She wasn’t exactly sure, though, what to expect back from Fort Bragg, who first claimed their account had been hacked and then revealed the tweets had come from an “administrator” who’d been punished with “appropriate action.” Well aware that the military didn’t exactly appreciate those employed in her field, she braced herself for a possible trolling.

To her surprise, virtually no one from the military attacked her over it, either. “Any whorephobic vitriol I received was offset by an army (sorry) of kind strangers who staunchly defended me, or maybe rather defended their own consumption habits, using me as a symbol,” she says. “Had this happened to any other online sex worker, I think the response from the military would’ve been similarly supportive.”

Finite attributes this oddly happy-go-lucky interaction with Fort Bragg to just how normalized online sex work has become, particularly over the past year. “Next to being a sugar baby, having an OnlyFans has become the least offensive form of sex work in the public eye,” she says. “With Beyoncé singing about it and tons of celebrities making accounts, there’s a huge line-blurring happening right now between porn and social media, as well as confusion around what even counts as sex work anymore.” Since the pandemic began, she says, being an OnlyFans girl is really no more salacious than “being a guy with a podcast,” and it’s interactions like the one she had with Fort Bragg that prove it.

Still, she’s hyper-aware that incidents like this don’t mean the stigma around sex work is gone from the military or the world at-large. Most celebrities don’t actually care much about sex workers, and the misconceptions people have about jobs like hers are both real and damaging. But her treatment by service members after the Fort Bragg thirst-fest represents an interesting display of acceptance that contradicts the perception of the military as a very traditional, patriarchal, anti-sex work institution. She’d like to think Fort Bragg’s horny tweets showed the more human side of the military and the relative level of openness they have behind closed doors and the anonymity of online profiles, but then, she pauses with a wry smile.

Sovereign Syre is a writer, comedian, adult performer, internationally published poet (not a joke) and prolific podcaster (totally a joke). She is currently the co-host of the historical podcast ILL REPUTE! documenting the lives of controversial women along side Siouxsie Q. James, and the co-writer of digital shorts on Unholy Bible Study.