Gutzon Borglum, the man behind the iconic granite celebration of Washington, Jefferson, Lincoln and Roosevelt, also played a vital role in re-establishing the Klan in the 1920s

It was the day before the Fourth of July in 1929, and the plane circled high above the battlefield in Gettysburg, Pennsylvania, dropping roses in honor of the Confederate soldiers who died there to defend their right to own other human beings. The gesture was the bright idea of sculptor Gutzon Borglum, who is best known for carving Mount Rushmore.

At Gettysburg, Borglum had been asked to build a monument to honor the lost soldiers from North Carolina, the ones General Robert E. Lee called the “Tar Heel Boys” (a nickname that eventually stuck to the entire state). Borglum had a special affinity for Lee and his losing army, so he’d been honored to accept the commission from the United Daughters of the Confederacy to commemorate their fallen dead. In order to add extra layers of meaning to his work, Borglum asked Orren Smith, the man who designed the Confederate flag, to pose for him. He rendered Smith in bronze, casting him as one of the soldiers in the statue and making him the flag-bearer.

A strange and mercurial man, Borglum had traveled to Pennsylvania from South Dakota, where he was still working on Mount Rushmore, to attend the dedication ceremony of the Tar Heel Boys. He didn’t miss many opportunities to commemorate old racists, being that he was one himself. In fact, six years earlier, in 1923, Borglum secretly gathered with five other men in Georgia to convene what they called an Imperial Koncilium. They met to elect the second Imperial Wizard of the Ku Klux Klan — Hiram Wesley Evans, a truly hateful man who would grow the KKK from a rural white terror group into a national organization that had reached mainstream popularity and significant political power by the end of 1920s.

Evans was the sort of bigot who said things like, “The world has been so made that each race must fight for its life, must conquer, accept slavery or die. The Klansman believes that the whites will not become slaves, and he does not intend to die before his time.”

Borglum agreed with Evans, while being a very vocal anti-Semite as well. He fretted that Jews were a “mongrel hoard [sic] that is fleeing form [sic] its own responsibilities in Europe,” and that Jews and southern Europeans were coming to the U.S. in such waves that they threatened to darken his nation, the country with the “greatest aggregate of [the Nordic] race under a single constitution.” As for the Indigenous people on whose land he erected his grand monuments to white men, Borglum once wrote in a letter, “I would not trust an Indian, off-hand, 9 out of 10, where I would not trust a white man 1 out of 10.”

Not surprisingly then, he also designed numerous Confederate monuments, including what is essentially the Confederate version of Mount Rushmore — Stone Mountain in Georgia. On the face of it, three slave-owning men loom over the land on horseback: Jefferson Davis, the first and only president of the Confederacy; and two of his war heroes, Lee and Thomas “Stonewall” Jackson.

The central figure is Lee, who stands 90 feet high and 27 feet wide. Even his sword stretches an enormous 50 feet. The entire stone relief artwork spans 190 feet across, and cuts 42 feet into the face of the rock. As such, it’s the largest single work of sculptural art in the world. (For comparison’s sake, a similarly equivalent monumental work is the Leshan Giant Buddha statue in China; it was cut out of a mountainside in the eighth century as an act of devotion to the teachings of the spiritual master. Here in America, we did that for systemic racism.)

Of course, this mountain monument to slavery has been called into question, lately. (Davis owned 113 slaves; Lee owned an undetermined number of enslaved people; and Jackson owned six Black Americans.) So people have begun to wonder: What should we do with a memorial dedicated to owning human beings?

The same could be said of Mount Rushmore, as two of its four faces (George Washington and Thomas Jefferson) owned slaves, and the two others (Theodore Roosevelt and Abraham Lincoln) were far from enlightened on matters of race. Roosevelt, for example, was one of the first men to argue that Black-on-Black crime is worse than systemic racism. “Laziness and shiftlessness, these, and, above all, vice and criminality of every kind, are evils more potent for harm to the Black race than all acts of oppression of white men put together,” he once opined. “The colored man who fails to condemn crime in another colored man, who fails to cooperate in all lawful ways in bringing colored criminals to justice, is the worst enemy of his own people, as well as an enemy to all the people.”

Meanwhile, the presence of Lincoln, the Great Emancipator, on Mount Rushmore is basically like a graffitied middle finger to the Lakota Sioux on whose land his stony stare now gazes across like a sentinel of the never-gone past. That’s because while he freed Black Americans, he’s also the same president who ordered the largest mass execution in U.S. history, killing 38 Lakota Sioux by hanging. 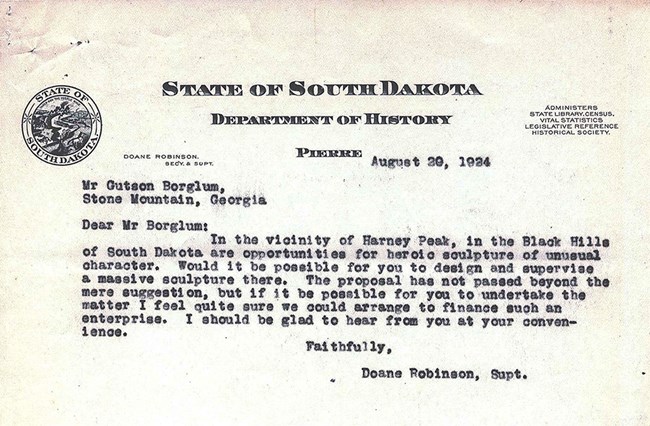 The interesting thing is, Borglum’s own life shows that it is indeed possible to un-carve the sins of the past. Case in point: Two years after Borglum started work on Stone Mountain, he’d pissed off the Southerners who’d hired him. They may have all agreed on racism, but they disagreed on personal comportment. They accused Borglum of “neglect and virtual abandonment,” as well as “offensive egotism and delusions of grandeur.” As if to prove them right, he retaliated by destroying all his models for the project. That action was met by legal claims of destruction of property, causing Borglum to flee Georgia.

Afterward, the work Borglum had thus far completed on Stone Mountain was removed out of spite — a giant carved bust of General Robert E. Lee was chiseled off the mountainside with pneumatic drills. The proud sons and daughters of the Confederacy were forced to remove their greatest hero from the mountain face because of their pride.

All of which is to say that, while Lee, Davis and Jackson are still honored on the side of Stone Mountain, they also provide a good example of how to undo monumental racism — even when it’s the size of a mountain.