Meet the Monster Energy Elite: The Connoisseurs Collecting the Most Extreme Drinks on the Planet

Inside the global community of collectors, reviewers and influencers hunting the world’s rarest Monsters

At 12 years old, Dennis had his first taste of a Monster Energy. He enjoyed the drink so much, he placed the empty can on a shelf in his room after he downed it. For a year, he repeated this process, trying new flavors one after the other and displaying them until he ran out of shelving.

But Dennis’ love for Monster couldn’t be bound by physical space. He decided to immortalize his collection online, posting his every can of Monster on a dedicated Instagram account called @EnergyCans_NL.

Yes, there exists a small community of influencers who collect and post rare Monster cans and flavors. It’s like the sneakerhead community, only for energy drinks. Most post their trophies under #EnergyDrinkCollection, but you can find Monster-specific collectors like Dennis at #MonsterCollection. (Watch out for actual monsters on this tag.)

“When I first started, there were only a few flavors [of Monster] available in the Netherlands for sale in local supermarkets, so I started looking on the internet for even more tastes and different looks,” Dennis tells MEL. Unfortunately for him, many of those flavors are only available in America. However, he soon discovered a website that imports different flavors, and he’s been importing, tasting and posting his way to the top ever since.

What It Takes to Be a Real Monster Collector

Any old Kyle can post a picture of his Monster Energy can, but the #MonsterCollectors are an elite tier. A measly green Monster Original propped upon a dusty shelf in a room lit by Christmas lights isn’t going to net you any followers.

Dennis uses a Nikon D3400, and carefully matches the atmosphere and mood to the can and flavor.

While Dennis says he no longer reviews the flavors (though he’ll tell you his thoughts over DM if you ask), some Monster collectors put just as much emphasis on the unique Monster palate as the picture itself.

Take Domenic, a Monster collector in Germany. His collection might not be as sizable as others’, but what he’s lacking in quantity he makes up for in quality. For example, here’s how he describes the Monster Energy GRONK edition:

“Monster Gronk 🏈 from the USA 🇺🇸💪🏻 first it smells like a regular energy drink with a touch of vanilla 🤔😱 But the first taste was delicious 😋 It tastes a bit like the Rockstar Original Energy Drink with a Blend of Monster Original 🤙🏻 But it has a very sour aftertaste 😂👅 In the End I must say that I like the drink 🥃🙋🏻‍♂️ [7.5/10]”

“I try to review all the drinks so my subscribers get a better sense of what it tastes like!” he tells MEL.

But, if it’s descriptions of taste people are after, they can go to YouTube, where bros describing the taste of their Monsters are aplenty.

On Instagram, however, the Monster Collectors focus on capturing the certain je ne sais quoi that surrounds each individual can. But capturing the essence of the cans isn’t purely for love of Monster.

“Of course, tastes play a big role,” Dennis explains, “but people will buy a can more quickly if the design is very beautiful, especially the rare cans. Designs that aren’t seen very often are more expensive [because] they become collector’s items.”

#Spon of the Monster

Perhaps it’s the reason he no longer publicly reviews the cans, but Dennis recently gained sponsorship to a Monster-importing shop, which sends him different cans and a stipend to the store in exchange for posting pictures to his large following. He’s now a bona fide Monster influencer.

“When I take pictures of these cans, I always put in the description that you can buy the can from their web shop [and] use the ‘Product’ tag, so you can immediately buy the Monster can that I place on Instagram when you click on the photo.”

“This is a unique deal for me,” he continues, “I can take nice photos of Monster Energy cans and I don’t have to pay anything. I don’t earn any more money there, and I don’t have to because it’s a hobby. For a certain amount per month, I can choose products from the web shop.”

Dennis says a rare Monster design “can sell for up to [$110] for just one can,” though just because they’re rare doesn’t mean they’ll taste better. “The weird or limited-edition cans do not necessarily taste better than the other cans,” he adds. 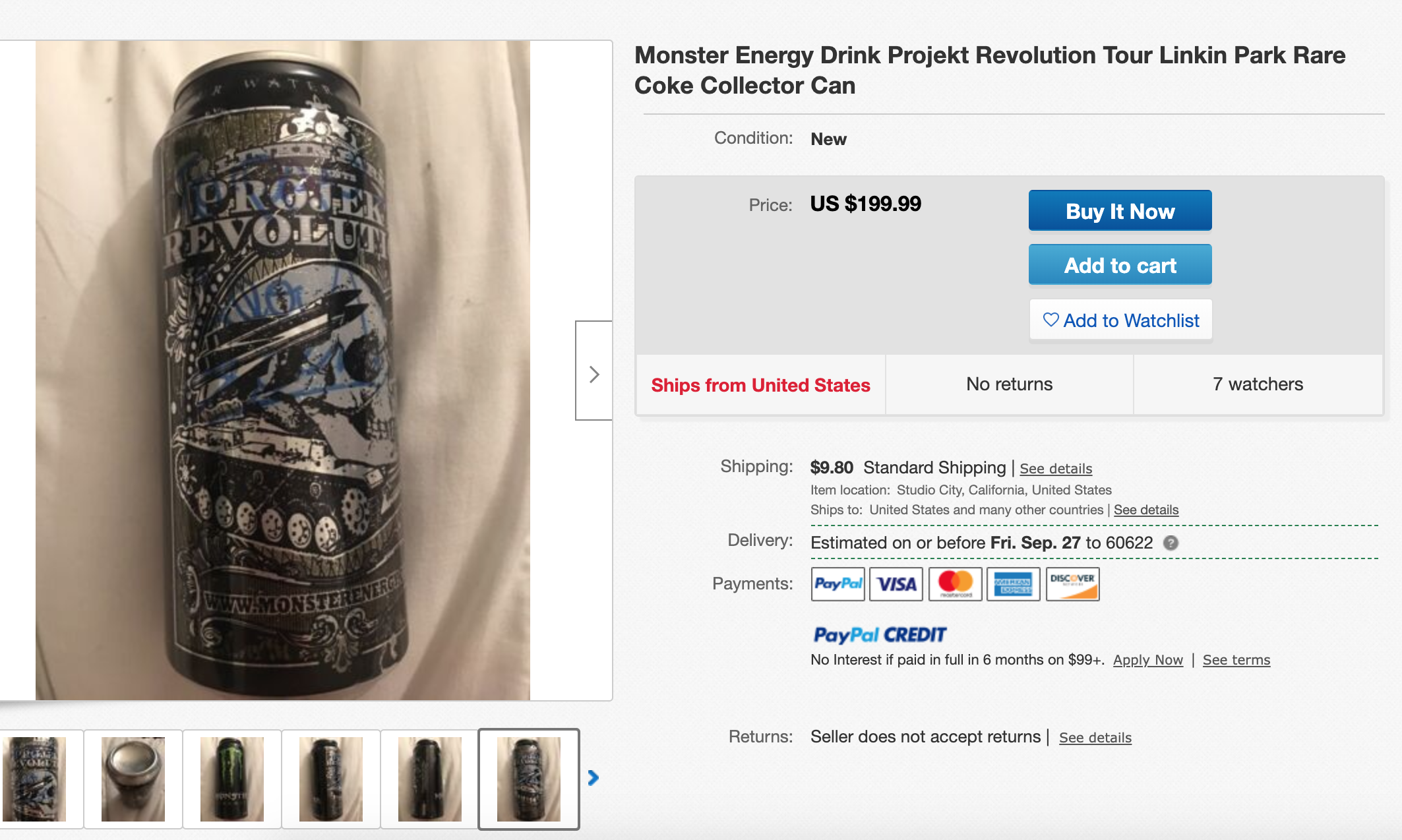 So what gives a Monster can extra value? According to Domenic, it’s the age of the can, what kind of shape the can is in, where it’s from and, finally, the design. For example, Dennis’ most rare can, pictured below, was released in 2008. But, he explains, “these BFC [“Big F*cking Can,” or 32-fluid-ounce] cans were only sold for a short time because they were too unhealthy for people, they were too big.”

As you can see, Dennis’ Heavy Metal BFC is in mint condition. But, he says, “the value of the can decreases if the Monster Energy tab is missing, the can is empty or if the can has scratches and dents.”

Some of the most sought-after cans, according to Domenic, are the “Java Chai Hai, Java Lo Ball, Monster Mixxd and any cans from before 2007 or older.”

Like many communities of collectors, adding monetary value to the items can make everything a bit more cutthroat. But so far in the Monster-collecting community, it’s quite the opposite.

“I feel like we’re all one big group of people with the same goal,” Dennis tells me. “We all mostly know each other and even have an international WhatsApp group for information about Monster Energy around the world.”

In their group chats, people will trade or sell their duplicates to others in different countries. If one guy has two limited-edition Gronk cans released only in America, he can trade with someone in Canada who might have snagged the discontinued Monster Rehab Tea Lemonade. There are collector groups all over the world: Irish Monster Cans, Monster Energy Germany, Monster Collection Denmark and Netherlands Monster Cans, to name a few.

With boots on the ground all over the world, the group has gotten savvy enough that, according to Dennis, they’ll know about new flavors and designs before Monster officially announces them on social media — and long before the Kyles get their filthy little hands all over them.