Missionary Position Did Nothing to Deserve Your Scorn

So why do people love to bash it? Missionary-shaming has less to do with the physicality of the act than a critique of one’s sexual politics

In a recent episode of the espionage thriller series Killing Eve, we see a romantic betrayal of sorts. I won’t spoil it for anyone who’s not caught up, but the fallout includes this line from the jilted woman, who decides to lash out at her apparent replacement by insulting the sex appeal of the man who completes this love triangle: “Hope you like missionary!” The barb was crucial enough to serve as the episode’s title, and it certainly seems to fit a recurring theme of the show: We want to escape boredom at any cost.

But the other woman’s response, while coded as pathetic, is nonetheless legitimate: “I do, actually,” she snaps. Finally! Justice for an arrangement we all rely on sometimes.

Like any setup in the bedroom, missionary has its pros and cons. But one thing that people like about it — the romantic intimacy of eye contact, a convenient kissing option, and maximized skin-to-skin contact — is a double-edged sword. Equating missionary with committed couplehood helps to import all the baggage of a potentially boring and eventually loveless long-term relationship. Thus it begins to evoke a status quo, the refusal to adventure elsewhere.

Missionary-shaming has less to do with the physicality of the act than a critique of one’s sexual politics. That we even call it missionary, as if it were the type of intercourse promoted by the church (in reality, the term probably arose thanks to pioneering sexologist Alfred Kinsey’s misreading of earlier anthropological texts) confers the air of authoritarian control. This is occasionally borne out by the law itself; in Florida, missionary is the only legal position for coitus, which I’m sure would come as a shock to millions living in the Sunshine State, including the adult-film professionals and the police officers.

The link between missionary and repressive force is also quite clear in the escalating fight over abortion and a new wave of legislative attempts to curtail reproductive rights. 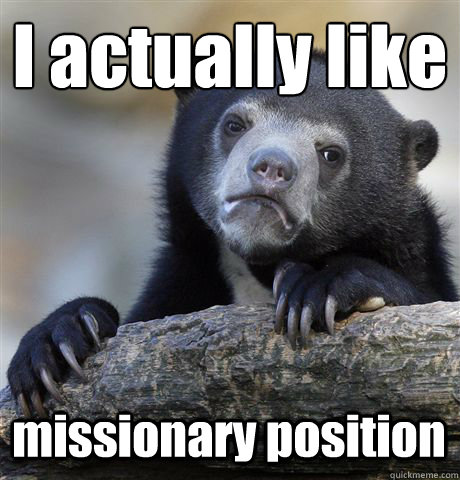 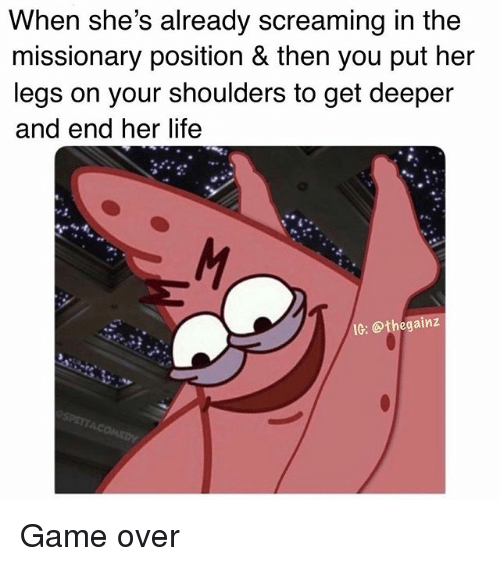 Then we slip into the familiar embrace of missionary — a basic technique, but not a bad one! I don’t hear people slandering the sweatpants they wear around the house, nor the occasional late-night dinner of boxed mac and cheese. As with those simple comforts, there’s such a thing as too much missionary, and a healthy sex life involves adventuring beyond it. But take this out of the mix entirely? Perish the thought. It’s a default because it works, especially when you figure out some favorite tweaks and the perfect angle. The same principle applies to vanilla ice cream: just give it a couple tasty toppings. Bam.

I think, no matter how they mock it, most sexually experienced adults know that missionary is a valuable part of the repertoire, so long as a few alternatives are regularly exercised. The people I worry about are the impressionable young adults making first nervous attempts at genital union, saddled by the misconception that missionary is for nerds, prudes and parents. Don’t listen to the haters, kids! Face-to-face fuckin’ won’t go out of style in this lifetime or the next. Even if we switch over to sexbots and VR, the beast with two backs is bound to survive in some form. Which makes me wonder if it doesn’t have some religious significance after all? In which case I have to say: Amen.