Miles Davis vs. Malibu: How the LAPD Terrorized a Jazz Legend

Miles Davis took no shit. Not on the bandstand. Not in the rehearsal room. Not before or after a gig. And certainly not from the police. So while the cops considered Davis the perfect example of someone who needed to be put in his place, Davis never gave them the satisfaction of playing the boy to their master. Not in 1959, when an NYPD detective opened up the jazz legend’s head (an injury that required stitches), and not in the 1980s, when the LAPD routinely pulled Davis over for the nonexistent crime of driving a bright yellow Ferrari through Malibu.

Davis knew what the cops wanted from him. He knew what they intended for him to demonstrate: a compliance and submission that established their dominance. But again, he refused to bend a knee to America’s systemic racism and its armed enforcers — the police — no matter how many times they stopped him while cruising along the Pacific Ocean.

Below is a clip of Davis explaining to Dick Cavett what it felt like to be hassled on a near-weekly basis by the LAPD. In his unmistakable smoky whisper, he tells the liberal talk show host, “I have a yellow Ferrari. And they stop me. So I told ’em, I said, ‘Why do you want me to tell you where I got the money from to buy this car, and how much it costs?’”

Cavett finds it shocking that the police in Malibu would be so committed to harassing someone of Davis’ stature. He thought it inexcusable that our police dare treat Davis like he was some two-bit violent criminal. To show his support, he presented Davis with a gift: a license plate that the talk show host felt should help clear up any confusion for cops: 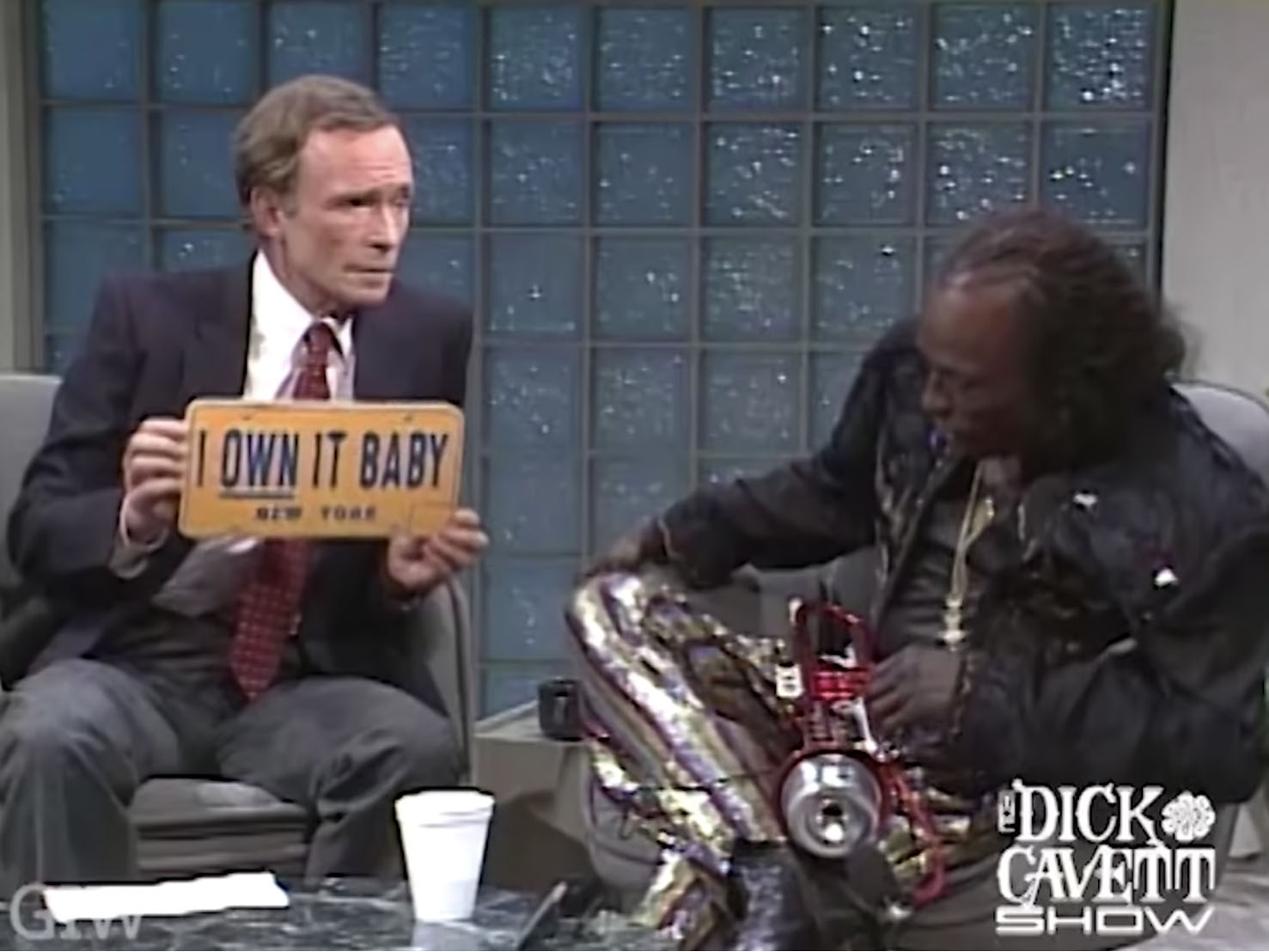 That, of course, was far too late for the racist assault on him by the NYPD. “I had just finished doing an Armed Forces Day broadcast, you know, Voice of America and all that bullshit. I had just walked this pretty white girl named Judy out to get a cab,” Davis explained in his autobiography. “She got in the cab, and I’m standing there in front of Birdland wringing wet because it’s a hot, steaming, muggy night in August. This white policeman comes up to me and tells me to move on. At the time I was doing a lot of boxing, and so I thought to myself, I ought to hit this motherfucker because I knew what he was doing. But instead I said, ‘Move on, for what? I’m working downstairs. That’s my name up there — Miles Davis,’ and I pointed to my name on the marquee all up in the lights.

“I just looked at his face real straight and hard, and I didn’t move. Then he said, ‘You’re under arrest!’”

Next, Davis wrote, “This white detective runs in and… BAM! hits me on the head. I never saw him coming. I ain’t done nothing but help a woman friend of mine get a cab and she happened to be white and the white boy who was the policeman didn’t like seeing a nigger doing that. Now I would have expected this kind of bullshit about resisting arrest and all back in East St. Louis (before the city went all-Black), but not here in New York City, which is supposed to be the slickest, hippest city in the world. But then, again, I was surrounded by white folks and I have learned that when this happens, if you’re Black, there is no justice. None.”

He found the same injustice a few decades later in L.A. “This happens all the time. They’re always saying they thought I was drunk, that I was weaving all over the place. This happens especially at night on the Pacific Coast Highway,” he told Spin magazine in 1985. “One time, my wife, Cicely, was asleep beside me in the car when they stopped me. When she woke up, she heard them accusing me of being drunk. She told them I didn’t drink. But they don’t care about that. It’s just racist. But we Black folks know about that. It happens every day to a Black person. It happens here just like it happens in South Africa.”

“The police make me mad,” Davis continued, “and I never say the things they want to hear. I don’t be saying, ‘Yessuh, boss,’ or ‘I’m takin’ the car to be washed and cleaned.’ Shit like that. Man, ’cause the shit I be wearin’ should tell any fool that I belong in the car! They ask me who I work for. I mean, a cop who has to work every day really be mad when what I’m drivin’ costs more than what he makes in a whole year! You know what I mean? One cop, after askin’ me to pull over, says to me, ‘Didn’t you see me behind you?’ ‘Naw,’ I said. ‘I wasn’t looking behind me watchin’ you. You watchin’ me.’ I didn’t know he was behind me. I don’t care if he’s behind me. Fuck him!”

And for what? To serve the fears of others?