If the billionaire becomes Trump 2020 challenger, he’ll lose on the dumbest possible issue

A classic difficulty of running for president is establishing a national profile. Before voters can like you, they have to know you exist. This seems to be a problem for a candidate like Deval Patrick, the former governor of Massachusetts, who has been all but ignored this primary cycle. It’s not an issue, however, for Michael Bloomberg, a three-term mayor of New York City, who is spending hundreds of millions of his own fortune to blanket the country with campaign ads. What’s more, people already knew who he was. Back in 2007, a Pew Research poll found 65 percent of American voters had heard of him — more, at the time, than said the same of Joe Biden or Mitt Romney.

But familiarity doesn’t imply support. The same respondents had virtually no interest in Bloomberg for president; more than half said there was “no chance” they’d vote for him. So while the massive ad buys are slightly raising his standing in the 2020 race, it’s very possible that folks now learning about him will soon hear something they really dislike.

And that something could well be his notorious attempt to crack down on giant sodas.

In 2012, toward the end of his tenure as mayor, Bloomberg announced a proposed amendment to the New York City Health Code: a sugary drinks portion cap rule, which went on to be popularly and erroneously described as a “soda ban.” The idea was that “food service establishments” would be prohibited from selling sugar-sweetened drinks in cups larger than 16 oz. The rule didn’t apply to diet drinks or the milk-laden but still sugary concoctions at Dunkin and 7-Eleven.

Either way, the New York City Board of Health passed it unanimously. Nevertheless, public confusion over what the regulation entailed — and endless late-night routines on Bloomberg’s effort to force healthy habits on unwilling constituents — turned it into a prime example of the so-called “nanny state,” and a fast-food lobby took out a full-page ad in the New York Times to that effect, even putting Bloomberg in a dress. “What’s next?” it asked. “Limits on the width of a pizza slice, size of a hamburger or amount of cream cheese on your bagel?” 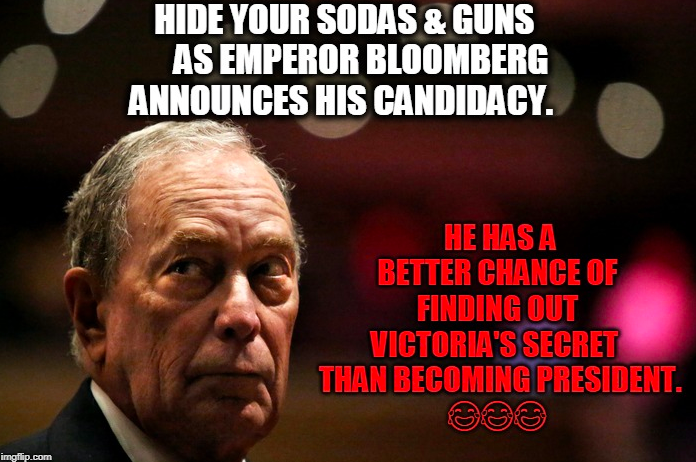 This outrage was certainly overblown, but effective, and the hyperbole survived in part because the rule did not. Early in 2013, right before it took effect, the New York State Supreme Court struck it down as “arbitrary and capricious,” with the Appellate Division later affirming that decision on appeal, noting that the Board of Health had violated the bounds of its authority.

Whereas Bloomberg’s earlier crackdowns on smoking and trans-fats were successful public health initiatives, the “soda ban” was his Waterloo, an executive overreach that could well haunt him if he were ever to be a major contender for the presidency. Already, the memes are circulating. You can practically hear Trump — a Diet Coke fiend himself — referring to Bloomberg as “Small Soda Mike.” And what’s the critical ingredient in most of these beverages? Corn syrup, a domestic product whose powerful, heartland-based industry is already involved in setting the Trump administration’s food policy agenda via the Department of Agriculture. 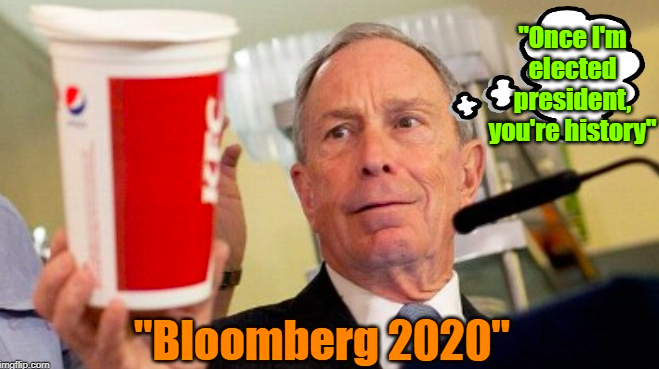 The “Bloomberg wants to take away your soda” shtick could be as effective as it is dumb, slotting nearly alongside the “liberals are coming for your guns” rhetoric favored by the NRA and Second Amendment fetishists. (Incidentally, sweeping gun control is one of the biggest planks in Bloomberg’s 2020 pitch, and he founded a nonprofit with the same goals.) Moreover, unlike the gun stuff, the soda thing has a bipartisan angle: The left and right share common ground in finding the law ridiculous in both intent and execution. And we’ve already seen how it lent itself to misinformation and exaggeration, finally serving as a case study in how far the government will go to limit individual freedoms or interfere with personal vice.

On some level, the candidate seems to realize this vulnerability, as during an interview on The Late Show With Stephen Colbert last month, he happily toasted Big Gulps with a talk show host who had mocked the ban years ago in his guise as an ultra-conservative pundit on The Colbert Report.

Any other opponent might hit Bloomberg as an autocratic oligarch — a man who circumvented term limits to stay in office and pushed for racist overpolicing. But Trump, who loves racist cops and routinely jokes that he’ll hold onto the presidency for literal decades, is far more likely to appeal to the MAGA base with scaremongering about the disappearance of their precious, highly addictive soda. The question is whether this country is broken enough to manifest a general election in which voters are forced to choose between these two men, and that choice becomes, in part, a referendum on the right to poison ourselves with bucket-sized cups of Mountain Dew Baja Blast.

Surely you agree that the answer is yes, definitely, we’re capable of driving politics to that kind of nadir, even if Bloomberg disavows the bungled ban as a regrettable mistake. A Trump vs. Bloomberg race means, without a doubt, a lot more content along these lines: 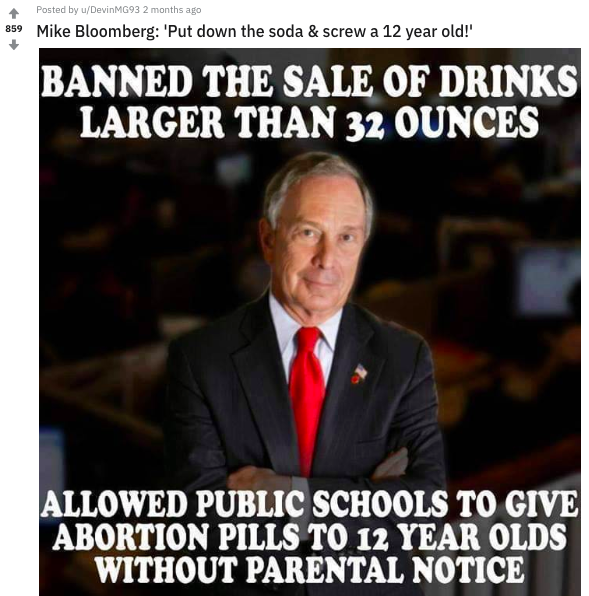 So, let’s try to avoid that, shall we? I’m not going to act as if anyone challenging Trump can avoid getting smeared, but goddammit, if he’s reelected thanks to Dr. Pepper memes, I will drown myself in a pool of La Croix. I hate that I even recognize the plausibility of it.

Bloomberg, take your billions and buy a clue: Soda will be your downfall.