‘Male Manipulator Music’ Was Supposed to Be a Joke

They say there’s no accounting for taste, but try telling that to the internet. We love to judge one another for liking this author and not that one, for rewatching certain movies so often you can quote the whole thing, and of course, for making huge emotional investments in narrow subgenres of music. Of all the entertainment media we consume, music seems to be the one that polarizes the earliest: Middle and high school factions may form around an affinity for punk or emo, Tupac or Biggie, old classics or the cutting edge. When we’ve chosen a tribe, we defend it as zealous gatekeepers — while condescending to anyone who doesn’t belong.

As a young man in the aughts, my musical preferences were easily steered by Pitchfork Media (now just Pitchfork), a blog that in those days skewed to the male perspective and focused on indie rock, along with other “hipster” fare. The site was known for heady, contrarian and sometimes brutal critiques, but when the staff really dug an album, they canonized it with great fanfare and gushing praise. Radiohead, Neutral Milk Hotel, Elliott Smith, Bon Iver, The Smiths, Joy Division, Kanye West, Weezer and Sonic Youth have all received perfect 10.0 scores for at least one record, either upon release or when it was reissued. Overall, the publication has elevated opuses regarded as ambitious, groundbreaking and difficult. Readers like myself, then, cultivated iTunes libraries and CD collections that reflected a kind of secondhand elitism.

Pitchfork has changed a lot since then — they’ll review Taylor Swift now, and favorably — but we have come to witness a hangover effect of the counter-establishment they once were: the rampant diagnoses, both serious and not, of something called “male manipulator music.” All the artists listed above have been named as members of this cadre, meaning they should present as red flags to women interested in dating men. It’s a natural parallel to the tired observation that a guy with Infinite Jest on his bookshelf is probably some kind of preening asshole.

There’s just one catch: The whole thing started out as a joke.

The first reference to “male manipulator music” dates to late March 2020, when a since-deleted TikTok — described in the tweet above — set off a trend on the app that continues to this day. It’s impossible to guess the tone of the original video without watching it, but it sounds like it was self-deprecating rather than strident. However, fans of Mom Jeans, the emo band that had acquired the descriptor, were confused and hurt. “At first, I didn’t think much of it, but after reading some of the other comments, I realized that there might be something to that stereotype,” a redditor wrote on r/Emo. In a preserved screenshot of comments on the TikTok, users bemoaned the “stigma” rising up around Mom Jeans.

It surely didn’t help that a few months later, Bart Thompson, a guitarist in the group, was publicly accused of having bullied someone “to a suicide attempt” when they were both teens. An announcement followed: Thompson would be “stepping back” from his role. Some fans came to his defense, but the link between the music and abuse allegations stuck. 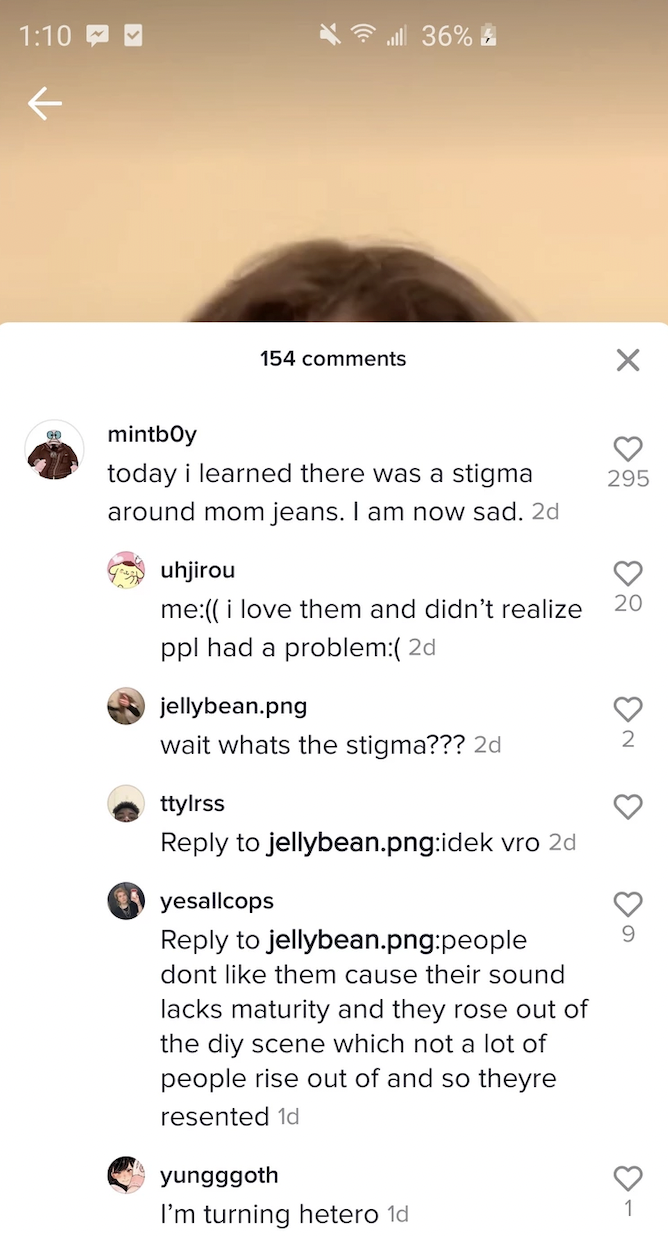 Then, last November, Twitter user @shortc1rcuit dropped “male manipulator music” in a troll prompt that cited Slowdive, one of their own favorite bands, as a prime example. To this day, the account is packed with approving comments about Slowdive, the harmless pioneers of a dreamy shoegaze sound. However, with social media being what it is, the phrase took on a life of its own, and the backlash from those taking it at face value led to @shortc1rcuit deleting the tweet.

The reaction once again underscored a fault line between irony and sincerity: Because the joke feels like a well-meaning person’s earnest overreach, we don’t look for the context that signals true intent. The tweet plays on the slow erosion of precise language as everyone starts to overuse it for engagement and clout, particularly the vocabulary of emotional manipulation. Words like “grooming” and “gaslighting” explode in the public consciousness and lose their impact as they are misapplied. Policing men’s playlists is a hilarious extension of that impulse. 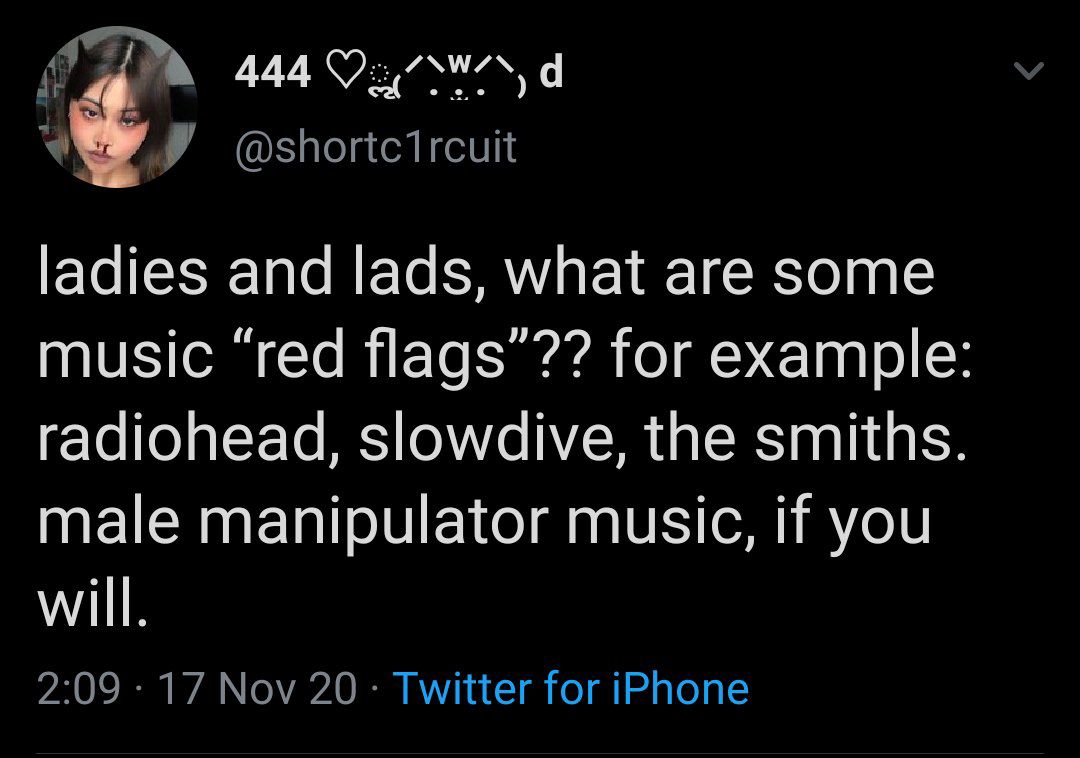 Again, the tension here is usually personal. Over on TikTok, many videos show the user ranking the Top 10 #malemanipulatormusic Bands, revealing in the process that they actually enjoy the “genre.” Sometimes it’s a dude going through his own record collection and concluding that he’ll never get laid. For every clip of a woman solemnly warning others not to date any guy who listens to Neutral Milk Hotel, or a bearded, IPA-drinking man suggesting Mac DeMarco fans should go to therapy, there are a dozen that function as meta-commentary on this need to pathologize whatever a man has queued up on Spotify.

One TikTok sums it up nicely with a visual of albums by My Bloody Valentine, Pavement, Strokes and American Football and the caption, “POV: you have horrible taste in men,” then the footnote: “*and excellent taste in music.” A sarcastic post on r/indieheadscirclejerk condemns the usual suspects for their sense of victimization and recommends switching to “clean bands” like AC/DC and Motörhead.

Yet the satire is fine enough that a student at the Harvard Crimson wrote a column explaining that a straight white man who has “made [Tame Impala] his key personality trait” or memorized the lyrics to Phoebe Bridgers’ “Savior Complex” can be “dangerous.” Unlike the vast majority of the TikToks, there’s nothing in this piece to suggest that the advice is tongue-in-cheek. 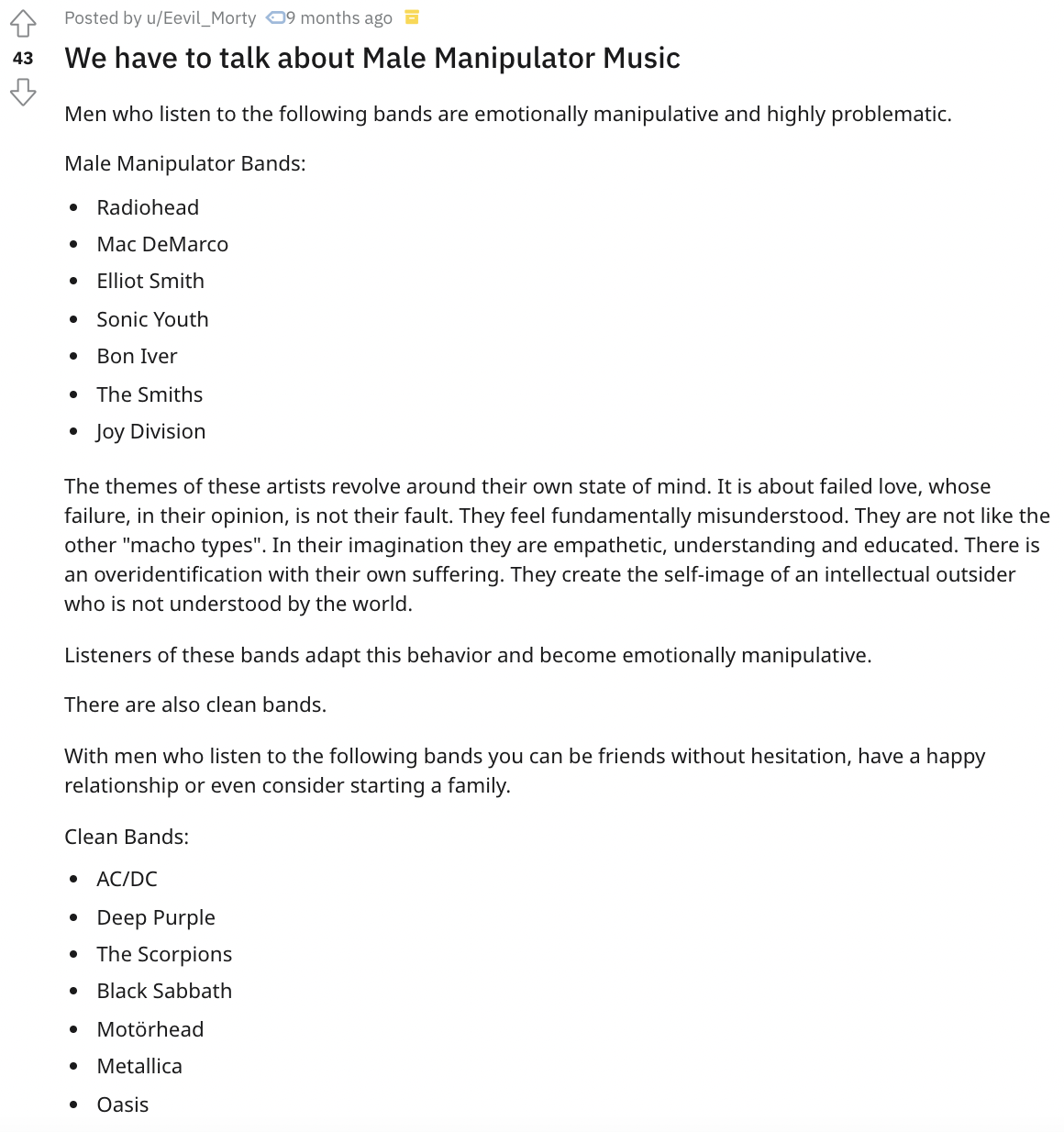 Ultimately, the confusion is part of the fun. The kids who popularized the cautionary label of “male manipulator music” were poking fun at their own generation while rankling the millennials and Gen Xers who fiercely argued over most of these bands several years or decades ago. We have always developed fan archetypes for any sufficiently popular band, and “the sad, mopey, introverted boy who may not treat his girlfriends well” is among the most enduring. It doesn’t mean you have to vet a hookup’s vinyl (or, at least, not with any more rigor than you typically would). Underneath the meme, we’re all jamming to the same stuff, and we always want more ways to debate, taxonomize and compare.

Don’t be manipulated into believing it’s an issue.