Anyone can make a sourdough starter, but a great hand-pulled noodle will make you feel like the king of the kitchen

Across so much of Asia, and especially China, the noodle serves as both staple nourishment and cultural myth, filling family bowls with flour and water but also luck, fortune and health.

It’s the reason why Koreans and Japanese and Chinese all slurp noodles on New Year’s Day and birthdays — the long strands represent a long life. It’s the symbolism beneath the beauty of watching a cook pull a lump of dough, again and again, until only a handful of thin noodles remain in his hand. That elemental process has fed people for hundreds of years. Even today, pretty much nothing has changed.

Given the quarantines that have unfolded across the U.S., I’m thrilled that all this delicious symbolism is also achievable within the confines of a home kitchen. I fell into researching hand-pulled noodles while writing about the Great Bread Boom of 2020. I didn’t have yeast to make bread, but I did have flour, water and salt. And as it turns out, making these Chinese-style noodles at home is easier, faster and just as satisfying as attempting to learn sourdough (or Italian fresh pasta, for that matter).

To be clear: I am not talking about the thin lamian-type noodles where you watch one loop of dough transform into 100 through the magic of delicate, confident hands. That stuff is amazing, but trickier to pull off without several (or very many) practice rounds, and who needs added frustration and waste right now?

What you should try instead is the biang-biang noodle, made famous in the U.S. at Xi’an Famous Foods (a favorite of the late Anthony Bourdain). These long, ruffly noodles come from Shaanxi Province in Northwest China, a 2,000-year-old historical hub of noodle culture, where they remain a crowd favorite alongside sturdy knife-cut noodles and aforementioned lamian. To make them at home, all you need is flour, water and salt and time. What results is a veritable magic trick: Pulling wheat into thin, delicious ribbons with your own hands never, ever gets old.

While there are many sources for instruction, I leaned heavily on the recipe from Steph and Chris at Chinese Cooking Demystified, mostly because they live in China and are obsessive about recreating local cuisines at home. For a two-person portion, you start with 200 grams of all-purpose flour (about 1 1/2 cups) and a fat pinch of salt in a big bowl, then start drizzling in 100 grams (about half a cup) of cold water while stirring the mix with your free hand. If you don’t have a scale, you’re going to have to use eyes and feel to gauge exactly how much water you need; the shaggy dough should morph into a smooth-ish ball after a minute or two of kneading.

At this point, the steps differ slightly depending on whether you plan on eating the noodles in two hours or eight. I went with the former, which means resting that dough ball, covered, for 30 minutes before kneading it again for a few minutes until it transforms into a firm ball. Next, you find the ugly, wrinkled side of that ball and pinch it all together to form one neat seam. Then you smooth the ball by placing it seam-side down on a cutting board and pulling the dough in all directions. Roll that into a thick log, chop into four, pinch the ugly cut edges together and repeat the roll-and-smooth process, forming four little logs. They get a two-hour rest in a bowl covered with two tablespoons of oil. And once the wait is done, the fun begins.

There is a huge culture of performative virtuosity around noodle-making around East Asia, and especially in China, home to the oldest documented noodles in human history. Entire memes have been made around “noodle-dancers” and the fun they have showing off. And so it is with biang-biang noodles, which some sources suggest is named after the sound of the noodle slapping the table as it stretches thinner and thinner before your eyes. There’s a pure wow factor to watching what looks like greasy pizza dough scrap turn into noodles thin enough to glow transparent against the sunlight. It’s perfect for a Zoom party or for an IG flex. Even standing in a kitchen alone, you can’t help but marvel at the transformation. 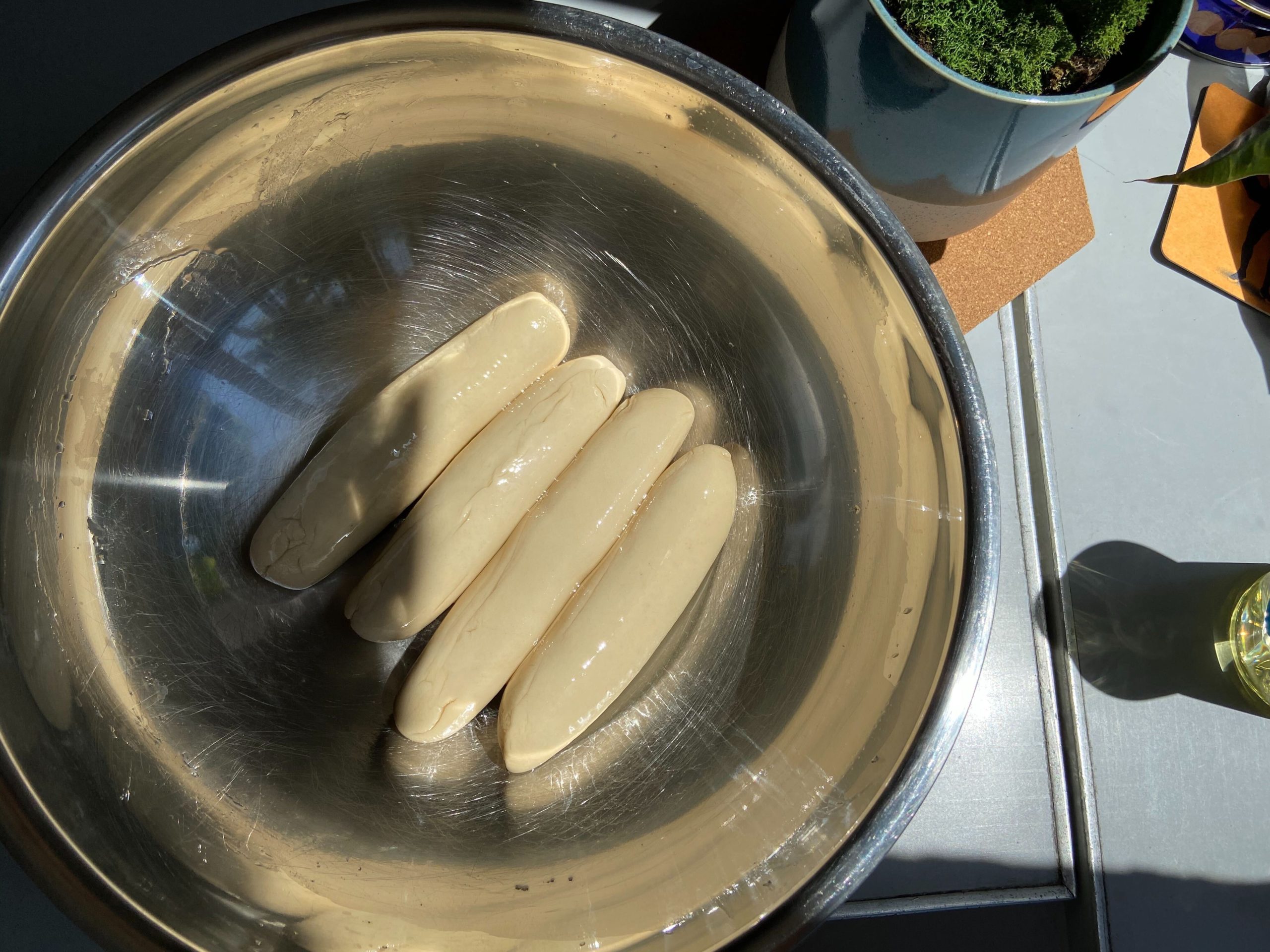 I split from Steph and Chris’ method at this point in the recipe, choosing to cut each oiled, rested dough log into two in the hope of making skinnier, thinner noodles. Then I rolled each piece out with a pin until it looked like a skinny rectangle, grabbed each end and began waving my hands in sync, slapping the center of the dough on the cutting board while extending my arms outward. The resting had done its job — the dough pulled easily, with enough elasticity to keep stretching even after I broke an end piece off. The final step was to grab the center of this ribbon and split it down its length, like string cheese. And just like that, I had an uninterrupted loop of frilly noodle, ready to go straight into a pot of boiling water.

You want the toppings handy before those noodles come out, because they only take a minute or two to cook. Traditionally, you might top the bowl with red chile flakes, minced garlic, chopped leek whites and tingly Sichuan peppercorn, plus squirts of soy sauce and black vinegar, before pouring smoking-hot oil onto the bowl to sizzle the aromatics. I had to replace much of those flavorings with a bottle of, errrr, Safeway-brand “Spicy Sichuan Stir-Fry Sauce,” because that’s life in quarantine. But when the oil sizzled over the chopped garlic and cilantro and mingled with the red sauce, slicking each bouncy hand-torn noodle in spicy richness, it felt like I had pulled off something big. 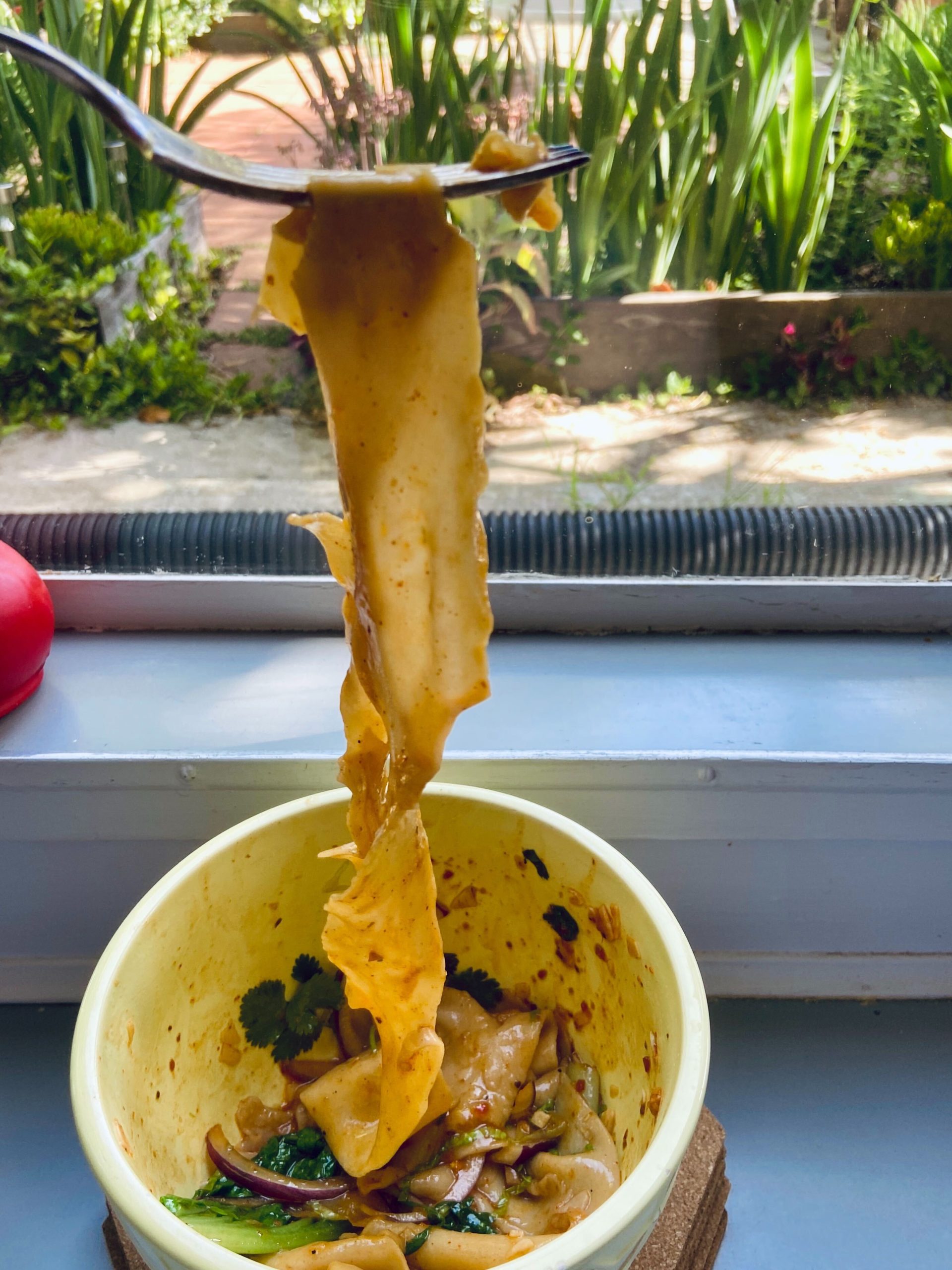 Funny how being stuck inside can force us to do things that were obvious, yet ignored, for all this time. But for me, this flashy little noodle dish encapsulates everything fun about cooking and discovery, with a deceptive simplicity that belies its versatility. These noodles would be great with leftover bolognese, or topped with a fridge-cleaning stir-fry; to be completely honest, I’d probably be happy to eat them stoned on a Saturday afternoon with nothing but soy sauce and sesame oil.

No wonder we’ve had a fascination with noodles for thousands of years, and I can’t help but daydream about making it to Shaanxi one day, just to taste these and other noodles pulled by the hands who know them best. But for now, between the good-luck superstitions and the flat-out deliciousness, this is a bit of culinary history worth recreating at home.