If Luke Skywalker Didn’t Die a Virgin, Who’d He Have Sex With?

Oh my god, this week in geek culture is nuts. We got a Game of Thrones episode loaded with fan service (Arya and Gendry!); Avengers: Endgame spoilers creep around every corner; and the slow tease of IT: Chapter Two has begun. Meanwhile, Star Wars fans were given something to sweat about before The Rise of Skywalker drops in December: Did Luke Skywalker die a virgin? And if not, whom did he dick down? Thanks to actor Mark Hamill, this is something we need to know now.

Virgin Luke has been something of a focal point on incel internet. The following theory was posted in September 2018 by redditor u/UpADuck_:

Then there are the memes: 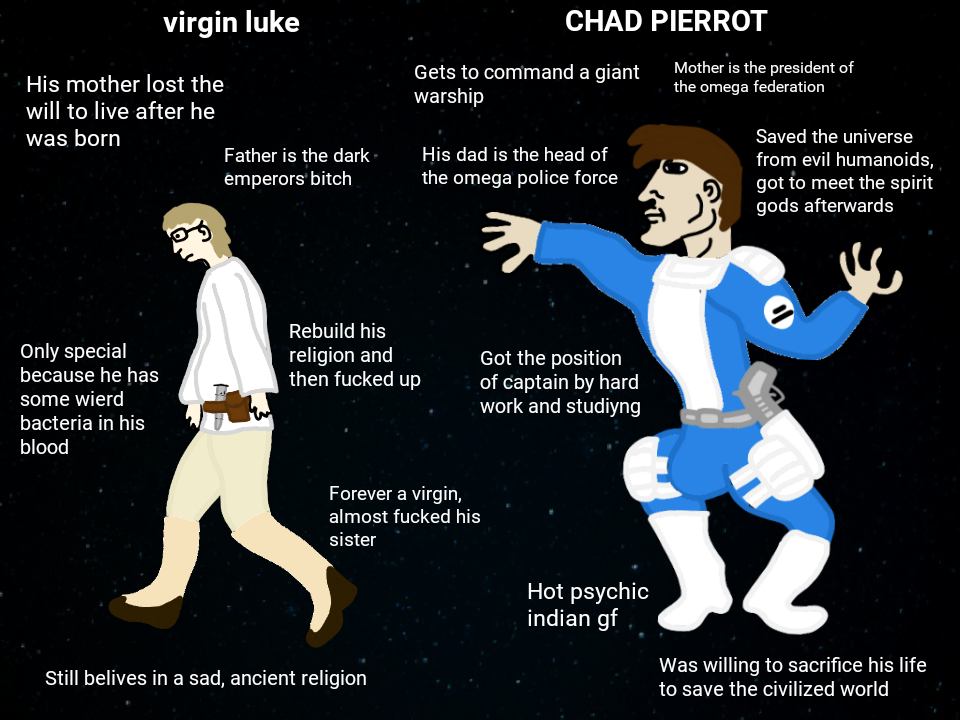 A Jedi warrior who certainly cashed in on saving the universe by unleashing a couple of proton torpedos of his own into a tight hole (sorry) is certainly a Chad. But who — or what — was the proverbial sheath to Luke’s little lightsaber? We turned to hardcore Star Wars fans and theorists to find out.

The Virgin Luke memes popular in misogynist incel culture are a lot to unpack. I’ll call your attention to just one line: “Virgin Disney Luke” vs. “EU Chad Skywalker”:

This is because in the popular non-canon Star Wars Expanded Universe (EU) — often called “Legends” — the leading theory is that Luke’s virginity went to Mara Jade.

Basically, in this extended version Star Wars, Luke fucks. In the movies the rest of us know, Luke is a beta virgin who does not fuck.

Legends relates to all Star Wars content from before 2013, except the Saga films, The Clone Wars and one book that came out in 2013. Everything in the EU was cut from the Star Wars canon when Disney bought LucasFilm in 2012, including Mara Jade. So when Disney acquired Star Wars, the thinking is, Luke (re)acquired his virginity. Or did he?

Who Is Mara Jade?

A Star Wars fan with a semi-official standing in the fan community — who wished to remain anonymous so people wouldn’t take his comments as “official” — explains that Mara Jade showed up “in a ton of content in Legends and became a main character.”

“She was an undercover Imperial agent in Jabba’s palace, and I believe that was the first time she saw Luke,” he tells me. “Eventually, he turned her to the light side and trained her to be a Jedi since she was Force-sensitive. He even gave her his father’s lightsaber, though I think she eventually made her own.” In Legends, the two have a son, Ben Skywalker, who ostensibly came from Luke having sex with Mara.

Here is a quick explainer on who Mara Jade is in the EU:

The Star Wars superfan tells me Mark Hamill is familiar with Luke’s marriage storyline and thus what he imagines is “the answer.” Still, “only the man himself would know for sure.” Hamill basically confirmed Luke — at least in his own headcanon — had big-time sex with Mara Jade:

But still, this all exists outside of canon. In fact, even the Star Wars literotica wiki is split into Canon and Legends.

Perhaps the movies will introduce Jade in some fashion, but right now, is there anything within the canon that hints to Luke wetting his dusty Tatooine sand worm?

Das_Flute says Leia is the first and “obvious” choice. “Especially given the flirtation between her and Luke in the first two movies.”

“Obviously this is a bit of a sticky situation given in Return of the Jedi it’s revealed they’re twin siblings, but it should be kept in mind that during the filming of those first two movies, George Lucas hadn’t yet come up with the idea that Luke and Leia were related.” Das_Flute adds that there was even an idea while The Empire Strikes Back was in production that Luke would have a twin sister, but it wouldn’t be Leia.

Still, many fans jump to this conclusion, which provides for some pretty, ahem, graphic “wincest” online. Star Wars has been in the public sphere for over 40 years, and so there is no shortage of Luke Skywalker literotica.

But the prevailing canon outweighs this speculation: Leia is the only confirmed non-virgin Skywalker in the family, thanks to Han Solo, the ultimate Chad.

The second in-canon character who may have been the first to see Luke’s O-face is a woman called Camie, one of Luke’s old friends on Tatooine.

Camie was actually originally supposed to appear in A New Hope, Das_Flute tells me, but her scenes eventually hit the cutting room floor. “She was played by actress Koo Stark, and is one of Luke’s friends at the Tosche Station he tells his uncle he wants to get power converters from.”

Camie was originally written as the girlfriend to one of Luke’s other friends, “Fixer.” But, Das_Flute says, “given Camie was the only girl in the circle of friends, and Fixer was written as a bit of an asshole, the options were probably limited … one can speculate that Camie may have been tempted by the ‘nice guy’ Luke.”

Had this storyline made it into the movie, just imagine the online garbage fire we could have on our hands, set ablaze by the incel jet fuel that is Luke being the “nice guy who doesn’t get laid” on Tatooine.

If you’re interested in reading a story where Luke “deals with his hormones on Tatooine before leaving and his interest in his friend Camie,” Das_Flute has you covered.

If not Camie, fans believe Luke had at least gotten some tail in his 20 years on Tatooine or after.

As Reddit user EdselFordsRevenge explains, “Luke had about 20 years where he was working the farm, hopping in the landspeeder at the end of the day to pick up Biggs and tear into town for some blue milk at the Tosche Station, maybe doing some drag-racing on the strip against other landspeeders (winner takes the power converters). It was basically Tattooinian Graffiti. Hell, a well-executed J-turn in a T-16 would get the ladies going wild.”

Working in canon, there is concrete theory that flies in the face of Luke having a committed, sexual relationship with the likes of Leia or Mara Jade. In a 2002 interview with BBC, George Lucas revealed that Jedi knights can have sex, they just can’t have long-term relationships. Nice.

In basing the regime on Shaolin monks, Lucas explains in the interview that “Jedi Knights aren’t celibate — the thing that is forbidden is attachments — and possessive relationships.”

Thus, some fans have speculated that it’s not Mara Jade who took his virginity, but simply some throwaway tail or a sex worker — as permitted and, dare we say, encouraged by ancient Jedi code.

Das_Flute explains that there “were a few female characters placed around the infamous Mos Eisley Cantina, including two characters who were described by the set crew as the ‘Star Whores.’”

But Luke paying for sex wasn’t even hinted at in the films, and Das_Flute says such sexual escapades don’t fit Luke’s character. “[He] doesn’t seem like the type to me who would feel comfortable paying for sex, especially the first time.”

Swinging back to the EU, we have a couple characters who Das_Flute say may have very well taken Luke’s V-card. For that reason, they may very well appear in the upcoming films. After all, it hasn’t been set in stone who Rey’s parents were, and speculation runs anywhere from her being a clone of Anakin Skywalker to Luke being her father and her mother being… someone.

“The last likely candidate for Luke to lose his virginity to is from the 1970s Marvel comics, which came out alongside the original movie trilogy and which Lucas [approved] a few story concepts of,” Das_Flute explains. “Luke was depicted as being close to a Rebel pilot named Shira Brie — and Leia was written as being jealous, given this was pre–Return of the Jedi — who was ultimately revealed to be an Imperial spy and dark-side apprentice of Darth Vader.

Thus the incest sort of continues. Being Vader’s apprentice “made her a surrogate sister of a sort to Luke, come to think of it,” Das_Flute says. “Shira Brie also set off a trend of Luke being attracted to redheads in the spinoff stories.”

Since Rey’s parentage is a key question in the current films, Das_Flute believes there is a “strong chance” Shira Brie makes it into canon.

“There are a surprising number of other romantic figures for Luke in the spinoff materials, but since they’ve already brought back some of the earlier ones [from the original Marvel comics], it may just be a matter of time before Shira reappears,” he tells MEL.

“Funnily enough,” he adds, “there are a few stories where [Mara Jade] and Shira fight. Shira also ends up seducing Jacen Solo, the Legends equivalent of Kylo Ren, so she was definitely interested in that Skywalker lineage.”

There are other theories out there, of course. One Twitter user, @LeiasSkywalkers, believes Luke lost his virginity to Lando Calrissian:

“Okay so there’s quite a few Skyrissian/Landoluke shippers on Twitter, but unfortunately landoluke is not as popular as Hando [Han + Lando] and Skysolo [Skywalker + Solo] but we exist,” she tells me over Twitter DMs.

“My personal headcanon is that Luke and Lando met during the Cloud City battle and Lando was very comforting to Luke when he was in pain, which kinda made Luke fall in love with him. They started dating between [The Empire Strikes Back] and [Return of the Jedi].”

She continues: “Lando was basically the first person Luke told about Vader being his father. When Han came out of carbonite, he was confused about how they ended up dating, but definitely shipped it and was waiting for them to get married, which they did, three years after the empires fall. Mostly because they wanted to take things slow and Luke needed to rebuild the Jedi order.”

It’s @LeiasSkywalkers’ belief that the two have a child via surrogate. Personally, she would love that child to be Finn, but she admits it could switch easily with Rey “for the Rey Skys out there.”

So as fans search for Rey’s parenthood as they search for Luke’s V-card, it seems like everything is on the table. Will Shira Brie make a heroic appearance? Or will a Game of Thrones–esque secret wedding ceremony in Cloud City wed Luke to Lando?

Or did Luke, a hermit on the Skellig Michael island, finally decide to just give it up to an alien? “He did seem pretty chummy with those aliens that gave him their milk,” Reddit user Spaghettischolar speculates. “A little give ’n’ take, I suppose.”