What Do the Spam Bots of LinkedIn Actually Want?

And how can I spot them?

There is no better way to judge the success of a social network than by the number of bots it has swimming in its murky seas. For years, Twitter and Facebook have been actively trying to rid themselves of these “social bots”: It’s estimated that 9 to 15 percent of Twitter accounts are social bots, and according to a Pew Research report from 2018, two-thirds of links to popular sites shared on Twitter come from automated accounts.

In 2019 however, LinkedIn had its bot-to-Jesus moment when they blocked or removed 21.6 million fake accounts on the platform. According to Geek Wire, “In a blog post, LinkedIn’s Head of Trust and Safety Paul Rockwell wrote that the vast majority of the fake accounts — 19.5 million — were blocked at the registration stage, meaning they never went live on the network. The company spotted another 2 million fake accounts, and members flagged 67,000 more accounts.” 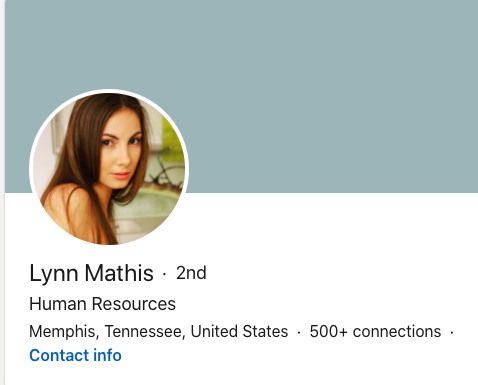 Up until that bot-bath, LinkedIn had largely skated by without having to deal with or even really acknowledge their bot problem. After all, as the New York Times reported in 2019, unlike Twitter and Facebook that have been enveloped in a war that they often pretend isn’t happening on their platforms over issues of misinformation, LinkedIn isn’t exactly a place people go to radicalize their neighbors. As John Herrman wrote, “Topics that can be risky for rank-and-file workers to bring up in an office, such as pay inequality, diversity or workplace harassment, tend to unfold on LinkedIn in the manner of an event organized by human resources.” This is to say that LinkedIn doesn’t quite lend itself to controversial discourse.

Still, where there are social networks, there are also baddie bots. The fake profiles, according to Dannie Fountain, an account representative at Google, who told Digiday last year that he receives them on a weekly basis, “typically have very limited information or are duplicates.” “If I search the name, I’ll see a second profile with more complete information,” he told the trade pub. “They are almost always asking questions about Google: How do I get hired? Can you review my resume? Can you submit a referral? Some of the more bold ones will ask or demand to set up time with me.”

But again, on Facebook and Twitter, arenas ripe for spreading misinformation to influence public opinion, the creation of bots to help amplify a particular message make sense. They allow bad actors to troll, spread fake news and attack legitimate users.

On LinkedIn however, the motivation for dispatching bots is less clear. On the one hand, these bots are basically phishing for data to help generate sales leads for companies looking to grow their brand, according to a blog post on LinkedIn from Tyler Robertson, CEO and founder of Diesel Laptops. In other words, they’re being used to generate email lists for unsuspecting users who forget or are unaware that you can disallow people from downloading your email address.

On the other hand, according to the same Digiday article, inauthentic profiles on LinkedIn “seek the attention of business people,” specifically recruiters. As David Shadpour, CEO of marketing company Social Native, told Digiday, a recruiter will basically use a fake profile of an ideal candidate — “Harvard undergrad, Stanford MBA, years of sales experiences at Microsoft and then Google” — in order to get a lead and find out whether a company is searching to fill one of their positions.

Most importantly, how does one spot one of these fakers? Thankfully, it’s not too hard. For one, according to Top Dog Social Media, a social media marketing company, if the person looks like someone from a stock photo that’s probably not a real person. Additionally, most fake LinkedIn accounts lack “any real personal info about that individual.” Strangely, a third indicator, although less reliable than the previous two, is that of a “suspiciously good-looking person,” per Top Dog Social Media.

So if you receive a LinkedIn message about a job opportunity from a man or woman that piques your interest, you may want to reexamine its authenticity. Unless, of course, you’re desperate for connections — be they human or machine.