Why Millennials Miss LimeWire Enough to Resurrect It as a Meme

LimeWire was miraculous, and no one thought it would survive. Eighteen years later, it's getting the recognition it deserves

At the turn of the millennium, nobody knew the future of music. But it was beyond obvious that personal computers would have a part to play. The rise of the internet meant the digitizing of entertainment, and your favorite albums were no exception. As early as the mid-’90s, songs were shared in compressed mp3 files, which gave rise to media player freeware like Winamp (for listening to songs on your PC) as well as portable devices (I had the short-lived MiniDisc Walkman).

There was just one problem: Where did you get the music to put on your hard drive? 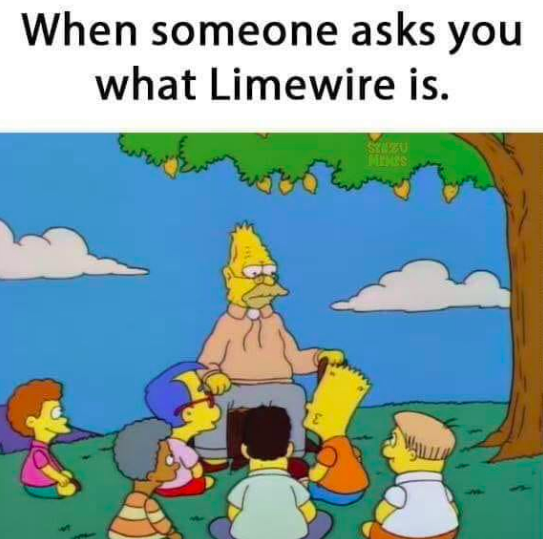 At first, it might have been a peer-to-peer file-sharing service: Napster, most famously, or maybe Kazaa — but both quickly ran afoul of legal actions from labels and bands. Soon you could buy tracks legally (and import the CDs you already owned) with iTunes. Still, the selection left a lot to be desired back then, no matter how cool the visualizer was, and the explosion of Spotify remained far off.

The mid-aughts brought with it a surge of remixes, mashups and oddities not found in physical format; at the same time, people wanted to trade older bootlegs and lost recordings within their new web-based fan communities.

These factors drove the culture of LimeWire, another P2P service that, unlike its early competitors, was able to operate continuously for a decade, from 2000 until a U.S. District Court injunction in October 2010 — long after its actual prime.

This month, LimeWire memes — many of them built on classic moments from The Simpsons, as if to overlay the ’00s aesthetic on ’90s artifacts for maximum dissonance — have enjoyed an unlikely boom.

LimeWire content existed before now, of course, as memes tend to gestate a while before reaching their tipping point. BuzzFeed in 2016 published “22 Things Anyone Who Used LimeWire Will Remember,” which helps to mark the site’s transition from nostalgia for your toys and Saturday cartoons to reminiscence of a grimy, corrupting, post-9/11 puberty and young adulthood. 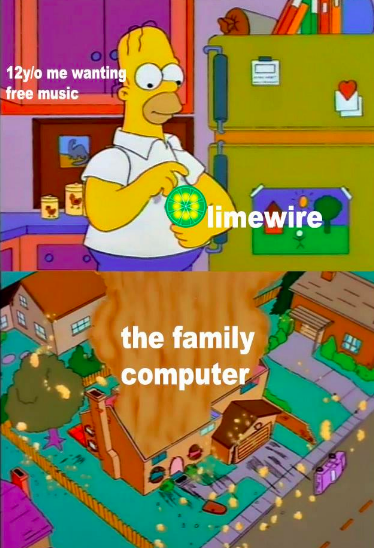 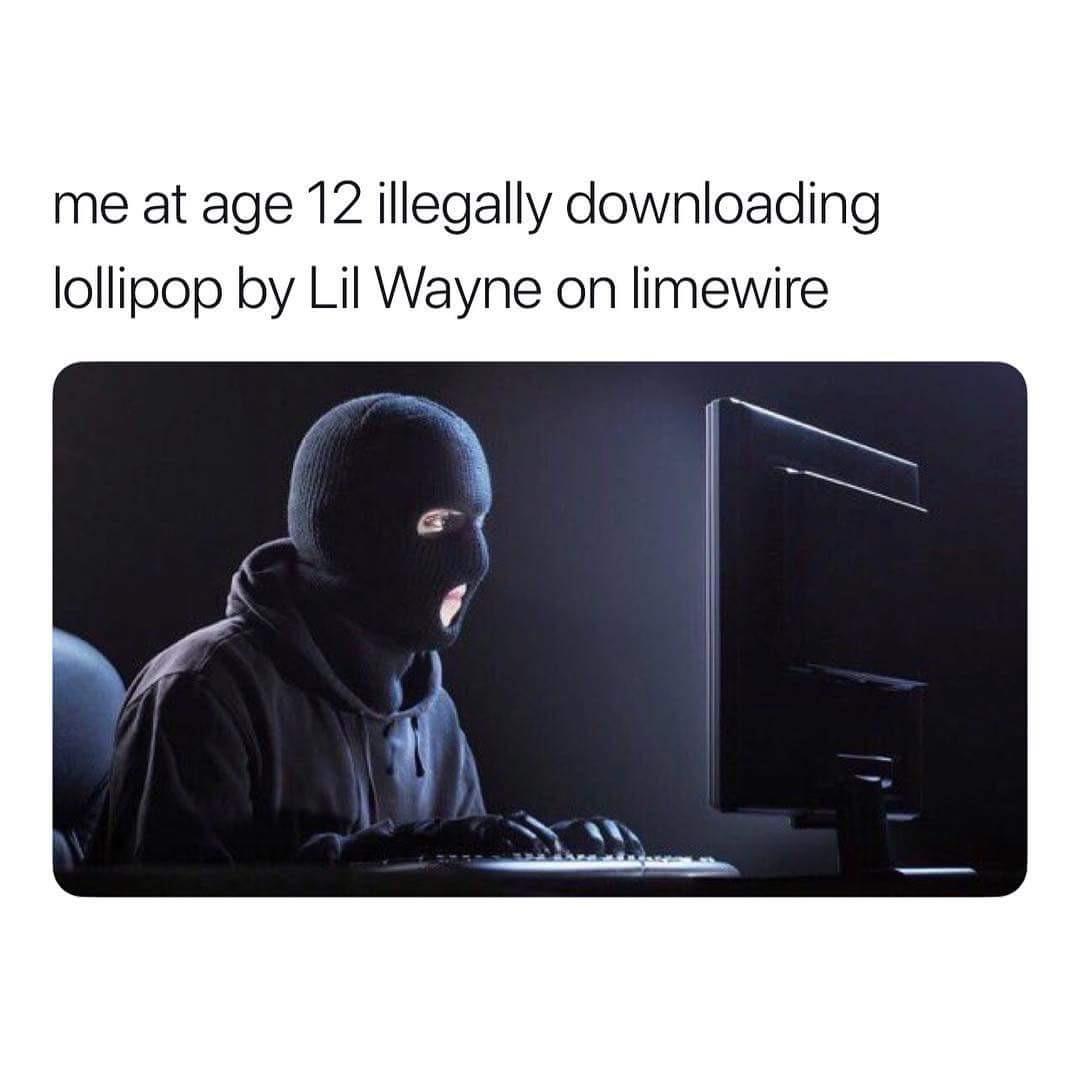 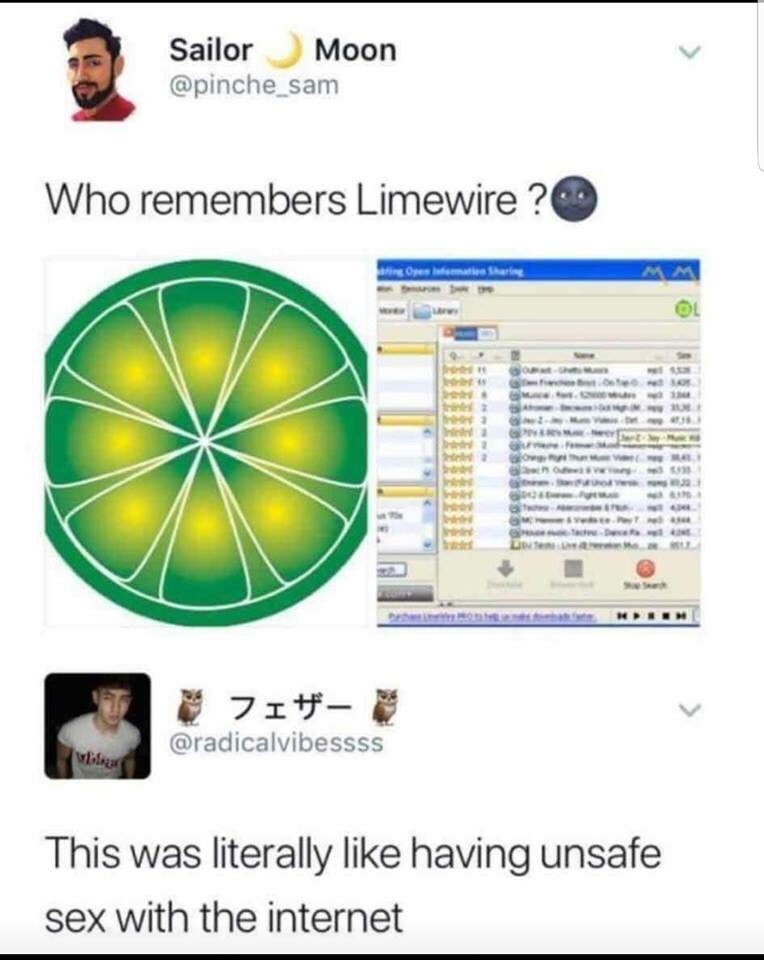 Looking back on the confusions, frustrations and risks of sifting through a vast, disorganized network of slow-moving files (apart from the viruses and smut, there were always rumors that users would one day be dragged into court over this unrepentant piracy), it may be hard to understand what we miss about LimeWire. Today we have cheap and instant access to almost every tune ever recorded by humans. Weren’t we living in the Dark Ages back then?

Well, yes. It’s not so easy to recall, here in the ever-bleaker days of the Trump era, but living through the start of the Iraq War, George W. Bush’s reelection and hurricane Katrina produced a similar apocalyptic feeling — except that the establishment was even more likely to frame it all as normal. That we could steal music online seemed natural, even healthy, in a world that was coming apart. And though it hurt artists, you tended to see it as rebellion against “the man.”

Besides, you paid the price in other ways. 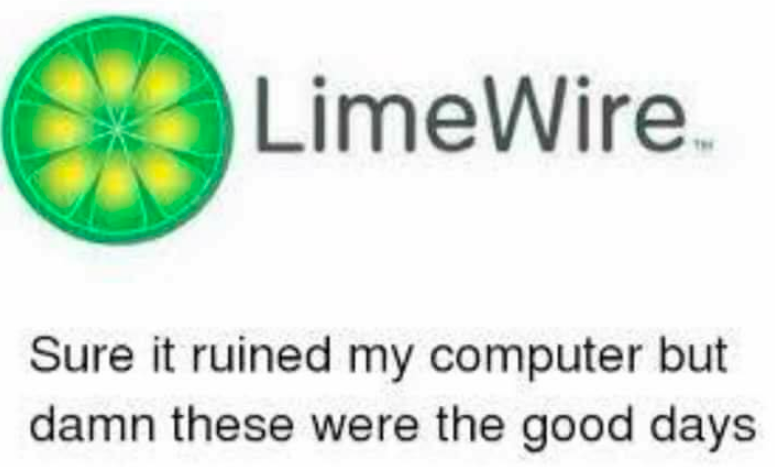 The affection for this bygone app speaks not only to our desire to play hacker and outlaw, but a patchwork internet in which that misbehavior was possible.

At the height of LimeWire, Facebook and YouTube were brand new, and they hadn’t yet monopolized how we interact. Web 2.0 sought to turn your real-life friends into followable accounts and avatars, whereas LimeWire and its ilk — as the sexual metaphor affirms — capitalized on near-random, anonymous connections between strangers. You couldn’t talk to whoever was hosting the file you wanted; you had to live by your wits and decide whom to trust. Primitive as that sounds, it made for a thrilling suspense you’ll never find in the walled gardens of today’s social media.

What’s more, without the discoverability of browsing or algorithms, you had to know what you wanted and fully commit to the hunt. LimeWire rewarded focus and patience instead of promoting distraction. 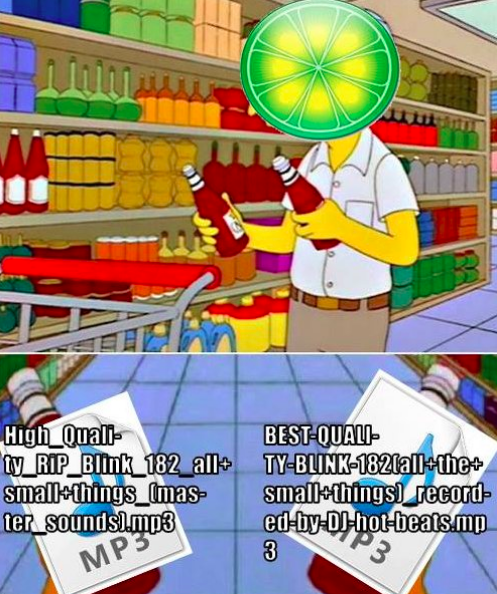 Nothing lasts, and nowhere is that as true as on the bleeding edge of technology. For all its flaws, and despite its basically indefensible premise, LimeWire offered a chance to outrun the powers that be, toward a future that wouldn’t arrive. Its temporary anarchy of degraded, infected and mislabeled content, strewn with the occasional gems you were after, wasn’t some kind of disappointing compromise — it was miraculous, and nobody thought it would survive. So you raced to download whatever you could, obsessively tracked the progress bars and left the program open overnight, trying to beat doomsday.

LimeWire itself was a glitch, and a happy one, too. Oh, to be back in that wilderness.