J.Crew Failed Because It Gave Everyone a Moose Knuckle

My theory about why the menswear giant collapsed? Its shitty chinos had zero ball room

J.Crew filed for bankruptcy Monday morning, becoming the first major retailer to crumble under the weight of the coronavirus pandemic.

Brick-and-mortar retailers have been on life support for a decade, but J.Crew didn’t flatline because potential customers were stuck at home, unable to stroll into their large, wafty stores with loud hardwood floors. I have a new theory: J.Crew failed because their chinos have zero crotch room. They’re stiff, overpriced and always giving me a moose knuckle.

A moose knuckle is like a camel toe, but for people with a penis and balls. It’s caused by pants that sit too high up, leaving your junk to separate and form a bulging crease right in the center of your crotch. Instead of breaking mainstream fashion, the only thing my J.Crew chinos did was break my balls.

Let me tell you a story about it.

In 2015, during my senior year of high school, I bought a pair of kelly green J.Crew chinos. It was spirit week at my Catholic school — the one time of year we shed our sensible uniform of Lands’ End khaki pants and scratchy polos embroidered with our school’s name. I always went big for spirit week, finding the perfect ’80s faux-leather jacket for Decades Day or jeans for Pajama Day. (Rebelling against tacky sleepwear garners more attention than Mickey Mouse fleece jammies.) For Holiday Day, I was set on being the most obnoxious, closeted leprechaun in northern Chicagoland. I assembled the perfect look: my brother’s Canterbury Ireland rugby jersey, three-leaf-clover socks (Four-leaf clovers are not Gaelic) and bright green J.Crew chinos.

Instead of looking like an Irish fairy, I looked like a hot mess with a moose knuckle. The J.Crew chinos sent all the attention that should have gone to my head straight to my crotch. I should have known then that the company that had just crushed my junk would crumble altogether.

At its height in 2011, J.Crew was the closest thing to high-fashion the common man could obtain. It was more stylish than the Gap, better quality than H&M and more affordable than Thom Browne.

J.Crew represented aspirational but accessible style for the adult in the room. Unlike most major retailers, the company invested in high-profile executives. Mickey Drexler, formerly of Gap. Inc., made the company profitable in 2003, tripling revenue from nearly $690 million in 2003 to just short of $2 billion in 2011.

His partner in preppy was Jenna Lyons. She joined the company fresh out of Parsons School of Design in 1990, and her first major success was overhauling men’s rugby shirts. In 2008, she became the brand’s creative director and later president. Lyons propelled J.Crew to success in part by growing her own celebrity. The New York Times called her the “Woman Who Dresses America.” Lyons was a fixture at the Met Gala and even played a Condé Nast editor on HBO’s Girls.

Lyons left the company in 2017 after two years of declining sales, a result of extreme financial changes. J.Crew’s owners reportedly transferred the company’s logos, designs and other “intellectual property” to a Cayman Islands LLC to evade compounding debt.

But the style didn’t evolve with the times. Once a brand for the creative class, J.Crew started producing overpriced, frilly twists on the same staid basics they’d been producing for a decade.

J.Crew failed by becoming exactly what it rose in opposition to. Unlike up-and-coming brands Madewell (owned by J.Crew corporate) or Anthropologie, J.Crew didn’t modernize into trendy workwear and boho styles. On their men’s lines, their clothes never met the growing demand for streetwear-inspired basics that spurred the rise of Uniqlo and Everlane.

The brand tried a 2018 relaunch without any innovation. For years, its men’s corner, which often took up a smaller floor space than the much-heralded women’s section, still housed boat shoes, khaki shorts and oxfords in every shade of pastel. I’d stroll in hoping to look like John F. Kennedy Jr. but usually left as a walking Easter basket.

In doing nothing, J.Crew went from progressive to establishment. It strayed from its downtown Manhattan artist roots to become a mundane retailer more related to Sperry’s, Lilly Pulitzer and Vineyard Vines.

After hearing about J.Crew’s Chapter 7 filing, I dug around my family home’s crawl space to find that bin of old high school clothes I’ve yet to donate. Through the clear plastic tub, I could see those kelly green chinos that wronged me.

The inseam is still short, and the cotton is somehow still stiffer than any jean jacket I’ve ever worn. The tag labels them “urban slim.” Nothing about these pants is urban or slimming.

Like me in high school, J.Crew is still an awkward, ill-fitting charlatan in eye-searing colors. Seems like I’m not the only one who’s outgrown them. 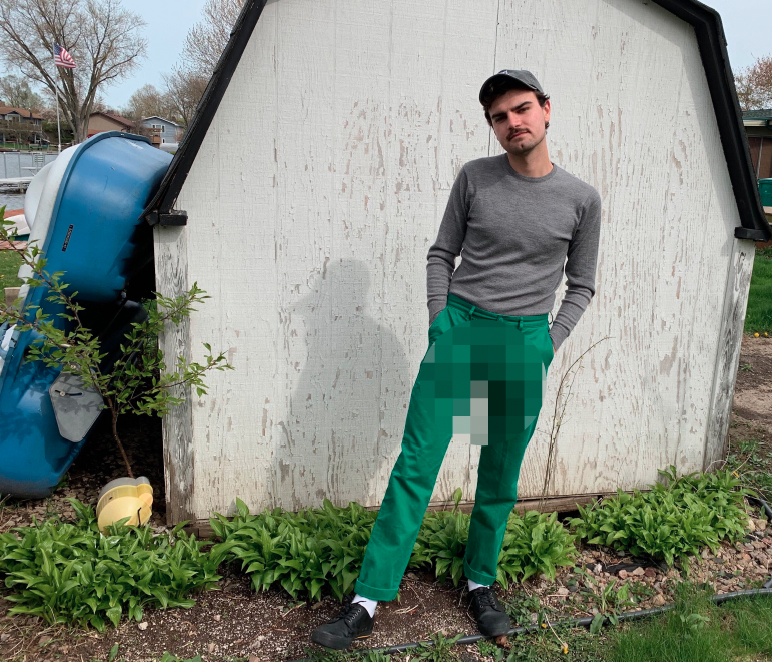