I’m a Jeff, and I’m Here to Take a Stand Against Geoffs

Is there a stupider name than “Geoff”? You’d be hard-pressed to find one. Its spelling is patently ridiculous; its phonics a middle-school bully’s wet dream — one effortless step from jerk off. “Fucking ridiculous. It doesn’t make sense,” my friend Chris tells me when I ask him what he thinks of the name. “Oh, your name is pronounced ‘Jeff’? Why don’t you just spell it that way?”

What makes things worse is the stigma the name transfers to its owners. Geoffs are people who just seem uptight and kind of “off.” It’s as if they’re pod people from Invasion of the Body Snatchers, except instead of aliens, they’ve been taken over by WASPs from Connecticut.

I say all of this, of course, with the complete understanding that my name is “Jeff,” Geoff’s kissing cousin and a name that isn’t much better. Even my dad can’t remember why he and my mom settled on it or what special meaning they had hoped it would bestow upon me. 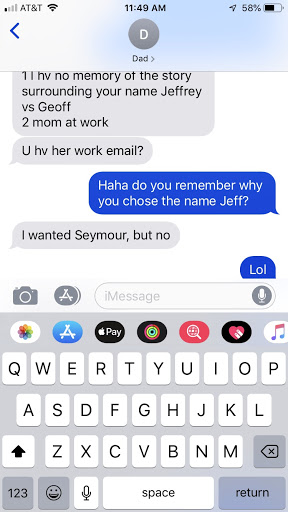 “I named you,” my mom explains later when I email her. “What I remember specifically is I went through all these names — as mothers do — for names that sounded good. I liked ‘Jeff,’ and 34 years ago, it was hip and cool. I liked the ring to it, and I liked your initials. Geoff was too ‘Old English.’ You were a California boy. After your brother brutalized it, though, I might have done it differently. But it looked like it’d be good on a college application, and I thought about that when I named you.”

Regarding my brother: What my mom is referring to there is the fact that he doesn’t call me Jeff. Since we were small, he’s always called me “Juff,” as if “Jeff” was so objectionable that his brain decided to go with something else entirely. “It’s not on purpose. It’s not premeditated. That’s just how I say it,” he tells me over the phone. “But ‘Jeff’ is a stupid fucking name.”

“‘Geoff’ is definitely worse. It reminds me of this kid from high school that had a unibrow and was a ‘full-connector.’”

With that settled, I next put the question to my colleagues, asking them what they think about Geoffs. One called them “creepy.” Another described the name as “low-key rapey.” A bit strong, but I understand the sentiment.

Finally, I turned to Twitter, always a bastion of rational thought and wisdom:

To be fair, though, I’d yet to hear from the true subject-matter experts on the topic — actual guys named Geoff. How have they handled years and years of trolling by basically the entire world?

Pretty well, it turns out. “I like my name now. I fucking hated it when I was a kid though,” Geoff R. tells me. “In my freshman yearbook it mentions GEE-Off specifically as my nickname, thus proving that nicknames aren’t always cute or cool. Now, though, it is cool because it’s a bit unusual. My mother named me after Geoffrey Chaucer, which is a good date conversation point because if the person knows who Chaucer is, that’s a good sign — for me.”

When I ask another Geoff, Geoff G., what he thinks about his name, he was equally “okay” about the whole thing: “I like it. It’s somewhat unique, I guess. I liked it less, though, when I was younger. Lots of ‘GEE-off’ and teachers calling me Gregory for some reason.”

Getting called by the wrong name was a common sentiment among Geoffs. Specifically, Geoff R. says that ordering food is a problem, and that he’ll “shamefully spell it as ‘Jeff’ to avoid confusion.” Similarly, Geoff Thorne, screenwriter and showrunner for Marvel’s Avengers: Black Panther’s Quest, tells me over Twitter that he gets called the wrong name constantly. “‘Gregory.’ ‘George.’ ‘Joff.’ It’s no one’s fault. Americans are mostly illiterate when it comes to Old English spellings.”

But despite all of the shit they’ve gotten — from me and the rest of the world — when I ask them if they’d ever change their name to “Jeff,” they were resolute:

If nothing else, you’ve gotta respect their dedication.