“Why didn’t they use pancakes for the buns?”

That was the first thing my wife asked when I showed her a picture of the Big IHOP Pancake Burger. This was an excellent question, and it was the same one a couple of friends hit me with when I told them about this culinary adventure. (Apparently, I love telling people about these taste-tests. Since I never eat fast food anymore, I get unreasonably excited about cramming garbage down my throat.)

Now that I’ve eaten the burger, I have no better answer for why the Pancake Burger throws a flapjack right in the center but sticks with ordinary buns to house the whole thing. Basically, this is a double cheeseburger that permitted a pancake to embed itself inside. It’s what happens when a seven-year-old is allowed to make his own meal, combining different, completely disparate foods he loves. There’s no reason for them all to be crammed together, but there’s no reason not to do it, either, I suppose.

Part of the pleasure of the Pancake Burger is knowing that I don’t subsist on crap like this. Eating the occasional caloric monstrosity is a fun little treat, a rare cheat from my usual diet. If I did it too often, I would die of shame — and heart disease. But as a fun novelty, god, this stuff is so damn delicious.

This, of course, has to be IHOP’s strategy. The company’s basically daring you to indulge your stupid side so you can tell people, “You think that’s crazy — I once ate a cheeseburger with a pancake in it!” Some people skydive, other people eat shitty burgers.

But how does the Pancake Burger actually taste? It’s perfectly fine, but its principal flavor is ridiculousness. The gooey cheese and fluffy pancake and creamy sauce are all meant to be sinful pleasures. They’re like the older kid in an after-school special who’s trying to get you to do drugs by appealing to peer pressure: “Hey, don’t you want to feel good? Don’t you want to eat something that’s profoundly terrible for you?”

That said, even I have my limits. A colleague suggested I put IHOP’s syrup on the burger. What am I, a child? On a side note, I’m now really sleepy and had to take Advil for a headache. If I don’t make it, tell my wife I love her — and that she should suggest to IHOP her pancake-bun idea. It’s sure to be a hit.

Also, speaking of colleagues, here’s what the rest of the MEL staff thought about IHOP’s latest additions to its burger menu, which consists of not just the pancake burger, but a new Garlic Butter Burger and Loaded Philly Steakburger, too. (We wrote about the original IHOb offerings last year.)

Miles Klee, Staff Writer: I thought the whole “IHOb” thing was the last we’d have to hear about a pancake chain trying to muscle into the overcrowded burger game, but clearly I was too optimistic. I guess the brand has to do something, though, since I haven’t been tempted to eat there in years — and there’s one about a five-minutes walk from my apartment. Will I stop in for one of the new offerings we tried today? Unlikely. The less said about their “Loaded Philly” burger, the better: Just understand that it bears no relation to a cheesesteak, and that the company had better hope actual Philadelphians never find out about it. The “Garlic Butter” burger is closest to the classic “yeah, that’s fine” cheeseburger, and I appreciate the nod to IHOP’s California roots in using garlic from Gilroy, state capital of the stuff — but it’s not especially garlicky or buttery? Lay off the mayo, please. Finally, you have the double-bacon cheeseburger with a pancake in the middle, whatever that’s called. A passable addition to the pantheon of Grotesque American Cuisine, possibly only because a dollop of maple syrup ties it all together. I can see myself enjoying it more when starving and stoned. Then again, that’s true of anything remotely edible. 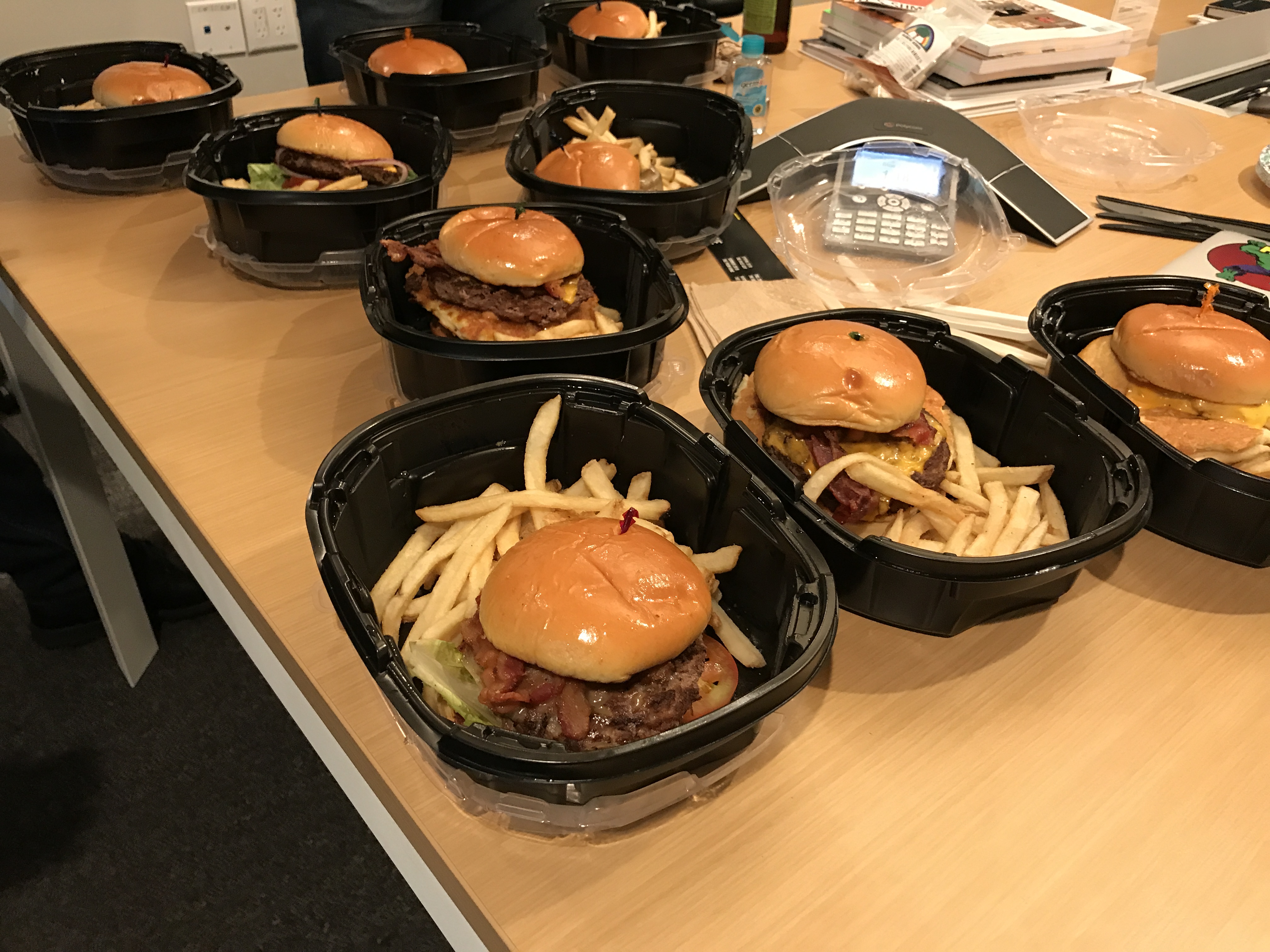 Nick Leftley, Senior Editor: This whole taste test was disappointing in its blandness. It probably goes without saying that the food wasn’t good, but neither was it bad enough to be memorable. The pancake burger just tasted like a regular burger, with a tiny bit of extra sweetness. The garlic burger didn’t seem to have any garlic in it. The Philly cheesesteak… well, I’ll be honest, I couldn’t bring myself to eat that one, looking as it did like a slipper full of congealed dog sick. If it wasn’t for the bloating and intense sleepiness I’m feeling right now, I would have already forgotten I ate it. IHOPe they can do better next time. 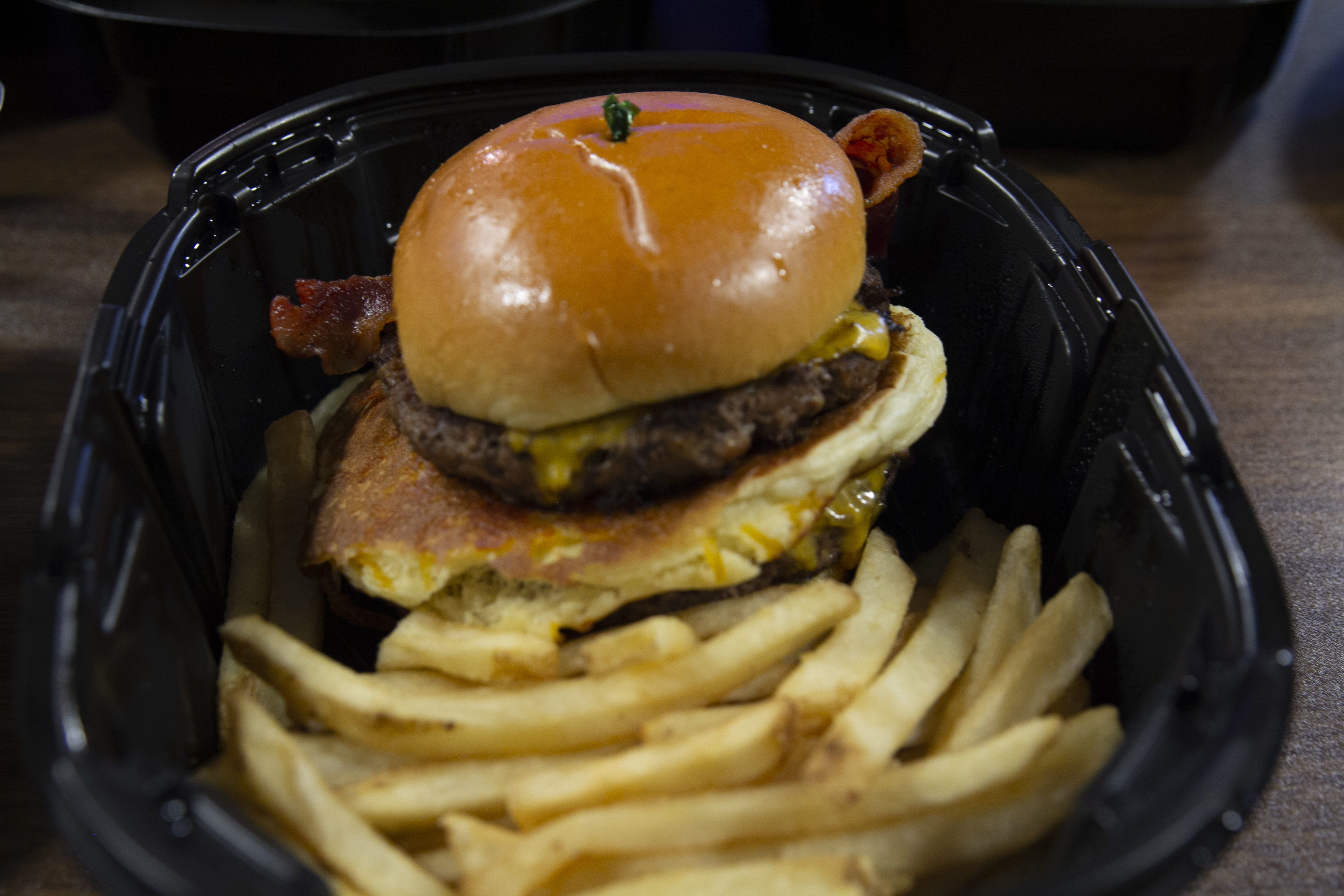 Eddie Kim, Staff Writer: Listen, I understand that the burger is the perfect vehicle for Brands® to pull stunts with. It’s so iconic, so beloved, so ubiquitous a food in America that it’s no surprise to see experimentations on the form over and over again. I once ate a burger that had two Belgian waffles for buns, and I willingly paid for it, and it was delicious. This Pancake Burger, which I did not pay for, was… well, delicious at first. Turns out, stuffing half of a 1/2-pound bacon cheeseburger down your gullet when you’re starving is pretty satisfying! But I never would have guessed there was a pancake in there, nor would I order it again, because at the end of the day, it’s a just-okay IHOP burger. What I imagined when I heard “Pancake Burger” was a burger sandwiched between, well, two pancakes — kind of like the McGriddle’s burlier, grown-up cousin. This was not that. This was a burger doing some sort of pancake cosplay. This was pancake appropriation. This was a middle finger to structural role the pancake plays in our pantheon of gluten-rich carbohydrate products. Shame on you, IHOP. Give me two full pancake buns. And maybe cook the beef patties a bit less.

Andrew Fiouzi, Staff Writer: Cold ground-up animal flesh is cold ground-up animal flesh is cold ground-up animal flesh. By which I mean, it’s not easy to judge the quality of a burger if said burger is tasted more than 20 minutes after it’s been cooked and the meat has had time to evolve into a jagged sort of pill that feels like chewed up nuts and bolts. Having said that, the methodology behind this IHOP pancake burger was just lazy. If you’re going to make a pancake burger, wouldn’t you just use two slightly fluffier pancakes for the bun? The reasonable answer is, of course you would. The IHOP answer, however, is, ‘Nope, let’s just toss a soggy flapjack in the middle of this flesh blob and call it a pancake burger.’ Well, sure, that’s fine. But don’t expect me to come to an IHOP establishment to order this Frankenstein when you have a perfectly good option like stuffed french toast. 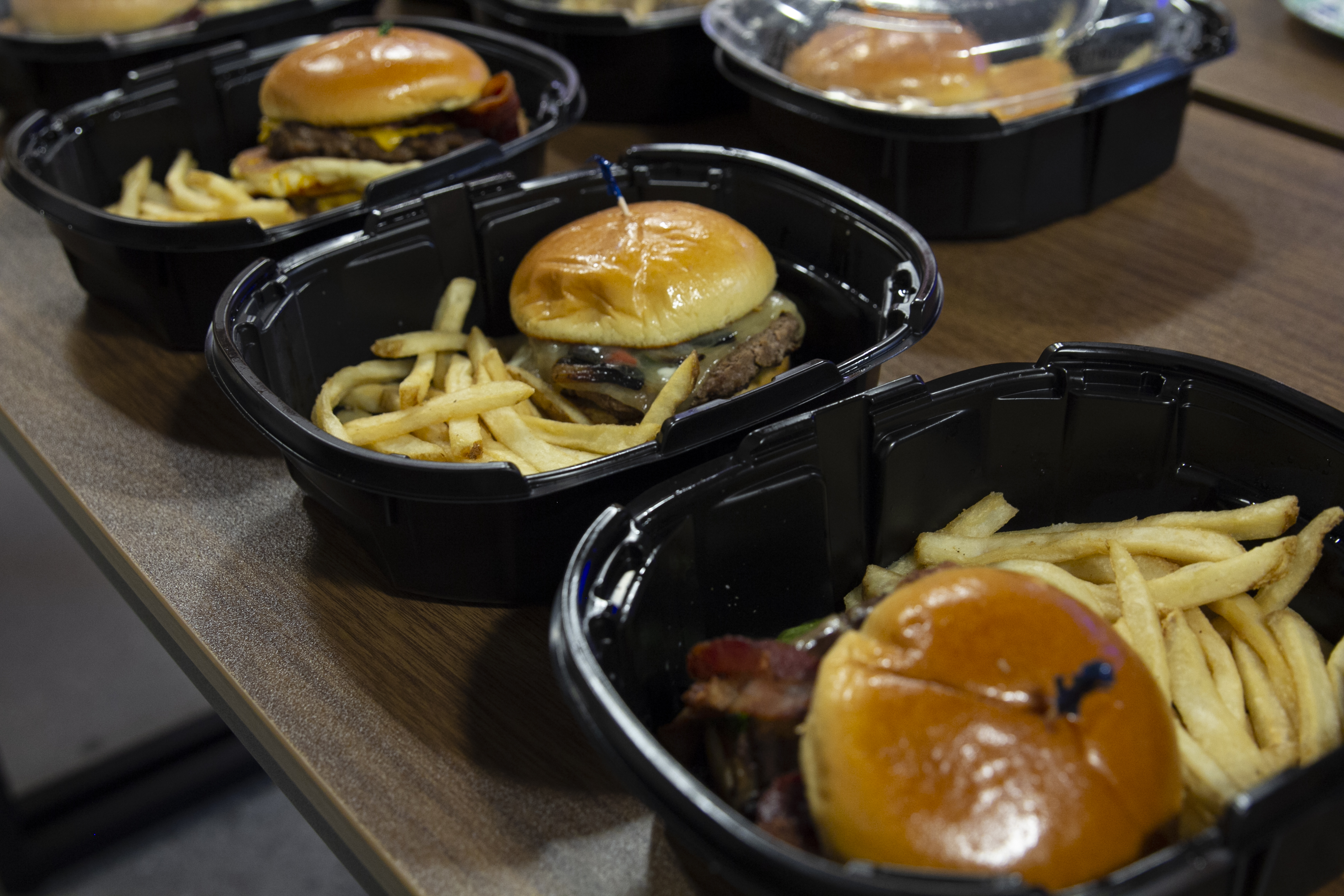 In fact, the only good thing about this burger was that it came with IHOP’s extra sugary maple syrup that helped WD-40 this sack of mediocre produce and strips of pig flesh through my esophagus. In other words, I enjoyed it only when I doused it in liquid glucose and forgot what I was eating. But don’t worry IHOP, even though your burger is trash, I’ll always love you for your two packs of powder, extra choclate-y hot cocoa. 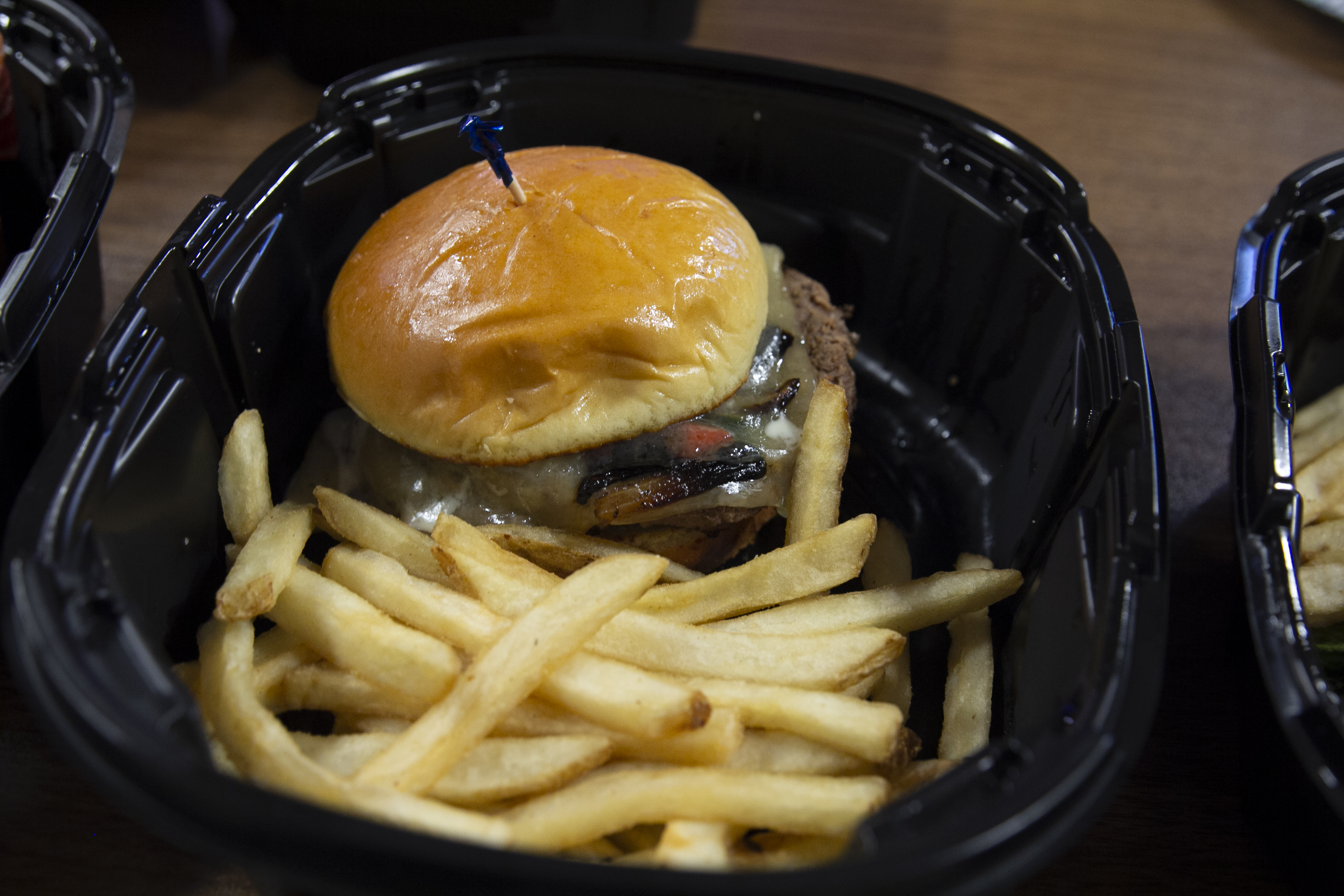 Brian Smith, Staff Writer: I’ve never bitten into a double bacon cheeseburger and thought, Man, I wish this thing had another layer of carbs, but that’s precisely what you get when you dig into an IHOP Pancake Burger — a wholly unnecessary inch of breakfast bread between two patties of meat. While Taco Bell brilliantly repurposed a piece of fried chicken into a taco shell, IHOP’s pancake burger fell short of capitalizing on the gimmick, choosing to merely employ a pancake as a third, hidden bun wedged between the patties, resulting in a meaty, carby sandwich of regret that no amount of syrup could improve.

Tarik Jackson, Story Producer: I stopped eating beef when Tupac died. So while my colleagues were chomping down on the variations of IHOP burgers, I had a special-order chicken version of the pancake burger. Admittedly, it started off less than — namely, the regular pancake burger is a double-decker bacon cheeseburger with a pancake in-between the patties, but the chicken version is just one grilled chicken breast sandwiched by two buns and a pancake. So the pancake is literally touching the bottom bun. Still, I liked it. The chicken was tender, the bun was soft and the addition of the syrup gave it a whole new feel. All in all, I’d definitely order it again — I’d just be sure to ask for a second chicken breast! 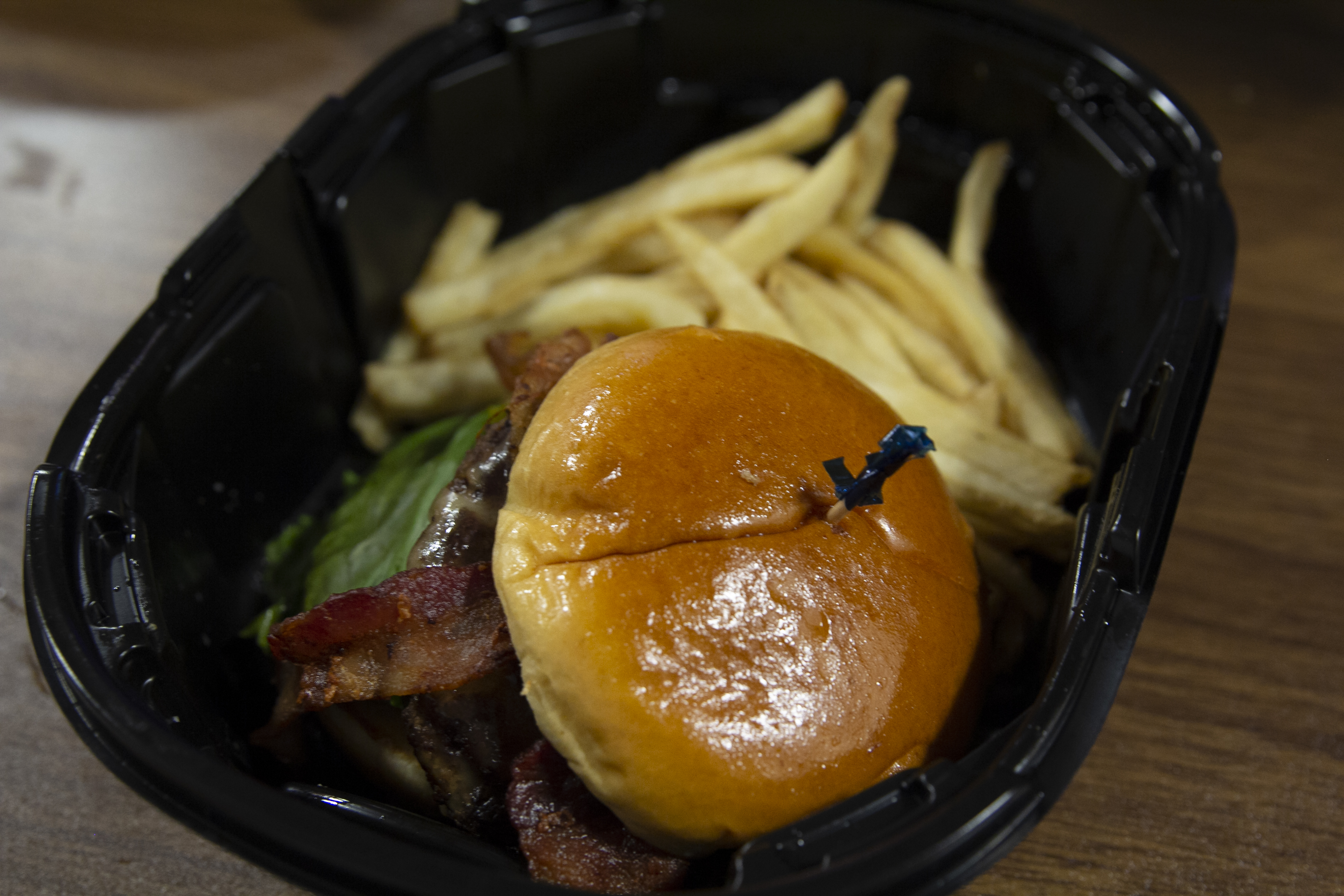 Cooper Fleishman, New York Bureau Chief: If you ever want to feel like Tony Soprano after sex, eat IHOP’s Big Pancake burger. I’m not much of a burger snob — I endorse Miles Klee’s “Every Burger Is Fine” fast-food philosophy — and IHOP’s new burger line sits firmly in the “fine” camp. The meat is bland and too well done; and so, ultimately, it’s just a vehicle for gimmicky toppings, like “garlic” (where is it?) or “cheesesteak” (really just onions and peppers).

But then there’s that double cheeseburger with a pancake in the middle. A little sweetness is usually a great way to add some razzle-dazzle to an overcooked beef loaf, but this pile doesn’t quite match the sweet-and-savory delights of, say, chicken and waffles. I think the problem is the texture: This burger is really just five layers of mush. But the whole thing changed when I poured syrup on it and imagined it as a thicc, meaty breakfast cake. The trick with this burger, in my mind, is never to eat it between noon and midnight. Save it for 2 a.m. after a night of drinking or 11 a.m. after a longer night of drinking. Then schedule a few hours to lie in a stupor, unable to think or breathe.