How to Make Coffee Work Again

If the invigorating effects of coffee are what get you out of bed every morning, you’ll be sorely disappointed when they begin to depreciate. A small mocha once kept you awake for three days, and now a gallon of cold brew barely makes your pinky twitch. It’s a real shame, because nothing makes the Capitalism Blues go away quite like a triple espresso. All of this is to say that you, my dear caffeine serpent, need a coffee tolerance break. 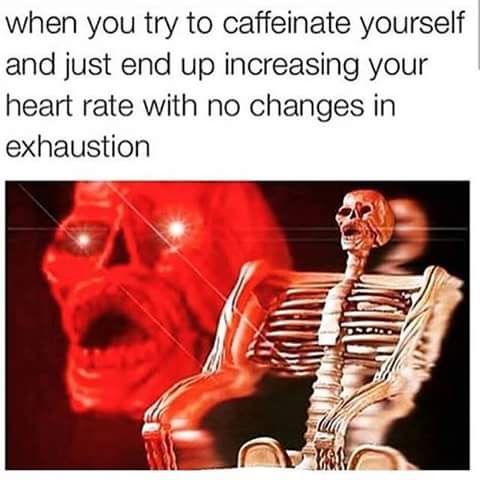 Because of what coffee does to the body, your best bet is simply to cut back for a while. Caffeine primarily works by blocking your brain’s adenosine receptors, which control things like sleep, arousal and cognition. A consistent intake of coffee over a period of time, however, increases your body’s production of adenosine receptors, making the effects of caffeine more or less null. But when you take a coffee tolerance break, those adenosine receptors begin a return to regularity.

There are a couple ways of doing this: If you have a serious coffee habit and suspect that going cold turkey will result in headaches/misery, a slow-and-steady decrease in your intake is probably the best bet. If you drink five cups a day, go down to four the first week, three the next and so on. Alternatively, you could swap your high-caffeine coffee for low-caffeine tea, or even a half-caf brew.

If you do decide to quit cold turkey, studies show that your body should be able to reset its caffeine tolerance in about eight days, depending on how much coffee you normally drink. Keep in mind also that exercise can help to mitigate the effects of caffeine withdrawal by pumping out hormones that prevent headaches and balance your mood, and drinking plenty of water is a good idea, too.

Change Up Your Coffee Routine

If you don’t drink that much coffee and are opposed to cutting back, there are a few things you can try that may help caffeine work better for you. For example, you can change when you drink your coffee. As I reported on a while back, most say the ideal time to drink coffee is when your cortisol levels — the hormone that makes you feel alert and awake — are low. That way, the caffeine provides energy when you need it most. For the average person, that means the best times to caffeinate are between 9:30 a.m. to 11:30 a.m. and 1:30 p.m. to 5 p.m. (Early birds can shift that schedule earlier, and night owls later.)

There are also ways to “hack” your coffee, such as Bulletproof coffee, CBD coffee and mushroom coffee. There’s not a whole lot of scientific evidence behind these brews, but anecdotal evidence suggests that they may help enhance the effects of your coffee, so they may be worth a try.

This is a controversial approach, because there’s a ceiling to caffeine’s effects, and if you’re reading this, you’ve probably already reached it (not to mention, you can overdose on caffeine). However, there’s also some evidence that consuming more than usual can have benefits, even among daily coffee drinkers. Just proceed with caution if you choose this route, and don’t keep drinking more and more indefinitely.

Finally, once you reset your caffeine tolerance, whatever you do, don’t shoot back up to the same amount of coffee you were drinking before, or else you’ll be right back to day one and wishing you could feel something again.

As for those who succeeded in taking their coffee tolerance break, I’ll bet that pinky’s twitching now, huh?