How Hot Is Scrooge Supposed to Be?

Next week, FX and the BBC will air the umpteenth screen adaptation of A Christmas Carol. Because there are so many iterations of this story — and because we live in the Golden Age of the Gritty Reboot™ — this one promises to be darker, spookier and swearier.

But a shift in tone isn’t the only twist in store. We’ll also be treated to an Ebenezer Scrooge played by 52-year-old Australian hunk Guy Pearce.

Most of us have spent our whole lives imagining Scrooge as a bent, haggard miser, so the foxy, rugged Pearce comes as something of a surprise. But maybe he shouldn’t! Charles Dickens’ beloved novel spends more lines on Scrooge’s ugly attitude than his looks; the character is first introduced as “a squeezing, wrenching, grasping, scraping, clutching, covetous, old sinner” before Dickens launches into a description of him as winter personified, “cold through and through.” Weather, we’re told, has no effect on the impassive money-lender.

Then, a seeming clue as to Scrooge’s aesthetic appeal: “The heaviest rain, and snow, and hail, and sleet, could boast of the advantage over him in only one respect. They often ‘came down’ handsomely, and Scrooge never did.” But this colloquialism is deceiving, as in the Victorian period, to “come down” was “to lay down money” — it’s just another way to call Scrooge a penny-pincher, rotten in soul.

It’s obvious Dickens wanted us to understand Scrooge as someone functionally unattractive. People duck and avoid him, fearing his evil eye, etc. Yet a reader also comes away with the impression that Scrooge is a person whose vast meanness has overridden his physical features. Perhaps we’re asked to picture a Scrooge whose basically pleasant visage has been transformed by years of bitter contempt for his fellow man. This interpretation is borne out by the customary choice to have a fetching young actor play Young Scrooge in his vision of Christmas Past.

We should also remember that Scrooge is tightfisted, which is to say rich. He may say “humbug” to any thought of charity for the poor, but he’ll spend a fair amount on himself. Affluence in mid-19th century London would have Scrooge poised to be relatively hot for the simple reason that he could pay for better food, clothes, doctors and housing. Think of the skincare routine! Hell, that he probably has all his teeth improves his rank substantially.

Beyond the question of appearance, there’s also a marked interest in the misanthropic air that would have us condemn Scrooge at the outset of A Christmas Carol. A stern, grizzled, moneyed sourpuss is exactly some folks’ type, even if it’s tough to pry any cash loose from his accounts. You enjoy his exactitude, his bitchy tone and clear-eyed greed, as if he’s a kind of anti-sugar daddy, or reverse findom.

And who among us hasn’t yearned for a person whose approval we’ll never have? Scrooge won’t crack a smile at your jokes, nor will he appreciate your courtesy. Being impossible to please doesn’t prevent admirers from lining up to try. Plus, cruel or not, you can’t deny that Scrooge is a cunning, witty bastard, savaging those who irritate him with words that wound the very heart. Throw in his mystic ability to behold both past and future, and the way Patrick Stewart rocks a nightcap… Yeah, I get it. Despite his lonesome ways, this guy fucks.

Scrooge. The name itself is a visceral verb. 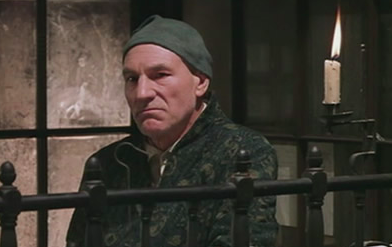 I understand why a few stalwarts are firmly against Hot Scrooge, or the slightest hint of the concept; Dickens, as noted, was at pains to make us despise him. Sadly, the great novelist was evidently unfamiliar with hate-sex, a practice that later, perverse decades have allowed to flourish. Sooner or later, everyone faces the ugly truth that hotness and likability aren’t the conjoined characteristics we prefer them to be. As the book podcast Fuckbois of Literature argues, we’re apt to think of a garbage personality as temporary if the owner is otherwise pleasing to the senses — they’ll change for the better, we insist.

History, of course, has rudely disproven this hopeful thesis a trillion times. Trouble is, A Christmas Carol relates the story of when one irredeemable piece of shit actually redeemed himself. Or began to, anyway. For all we know, Scrooge was back to his cranky, hard-hearted self by the first of January. Even then, the glimmer of brief generosity is enough to let us wish for another, more lasting Christmas miracle. It’s the catharsis of the deeply implausible, overnight rehabilitation that’s made Dickens’ tale an enduring classic. If only your hot/awful boyfriend were capable of such a transformation.

Oh well. In another couple years, they’ll let Benedict Cumberbatch play Scrooge (drawing from his experience as the Grinch), the stan hive will go absolutely bonkers with thirst, and we’ll forget the role was reserved for jowly types able to make this face. Though, to be honest, the Not-Hot Scrooge has a charm of his own. That he’s a nasty old geezer who gets scared by holiday ghosts is… endearing? He hates Christmas, that’s cool.

And, c’mon, the money. Admit it: All that coin turns you on.