How the Entire Internet Got Pilled

We think of memes as digital artifacts, but of course they preceded the internet in many forms, including conventional wisdom, rumor, propaganda and idiom. Sometimes a meme will even build off an existing quirk of language. Take the phrase “hard pill to swallow” — meaning a truth we find difficult to accept — which found new life thanks to illustrations of pills on WikiHow: 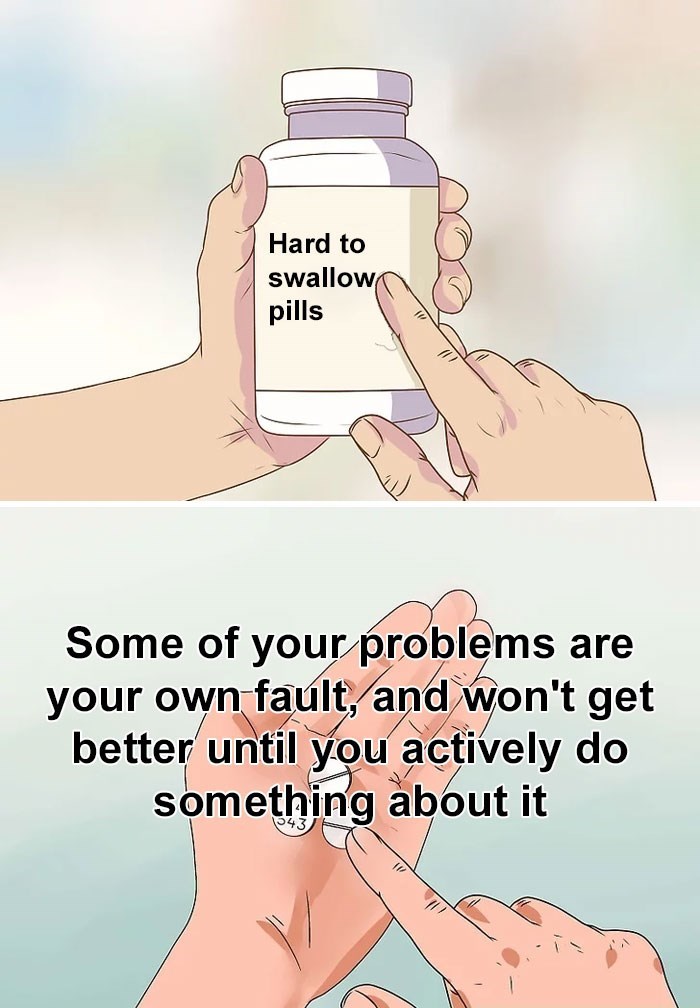 If an epiphany or worldview can be reduced to the metaphor of a “pill,” then there are infinite pills to go around, one for every possible belief. The pill you’ve most likely heard of is the red pill, most often associated with anti-feminist men and their right-wing echo chambers. If you’ve been red-pilled, it means you are on a course of radicalization that leads to hardcore misogyny, racism and violence. The term is lifted from the sci-fi touchstone The Matrix, in which Keanu Reeves’ messianic hero has the choice to take a red pill and wake up from a machine simulation that imprisons most of humankind, or a blue pill that allows him to stay plugged into the virtual reality, ignorant of its artifice.

In the years after the movie came out, people invoked the red pill like a manager might talk about “thinking outside the box,” suggesting that their takes — whether simply counterintuitive or wildly paranoid — had exposed something hidden underneath the ordinary surface of life. For manosphere groups, who adopted the term later on, that “something” was the supposed fact that women control Western society and have made men into second-class citizens. Whatever brings you to this conclusion is a “red pill.”

But the pilling didn’t stop there. On Reddit, you can also visit r/TheBluePill, a forum that ridicules red pill content, or r/PurplePillDebate, which presents itself as a “neutral” community for the discussion of sex and gender. The black pill is bedrock nihilism. Some have posited the existence of “grey pills,” helpful little seeds of doubt and exception that challenge your overconfidence in tenets like the red pill. If you persuade someone to invest in Bitcoin, you’ve “orange-pilled” them (because the cryptocurrency’s logo is orange). A “green pill” might be the shocking revelation of how bad the climate disaster has gotten.

Of course, not every pill is tied to a color. Adherents of the QAnon conspiracy theory are “Q-pilled,” guys who prefer to disengage from online drama and barbecue meat in the backyard are “grill-pilled,” etc. And as the pills trickle down into the context of the mundane and everyday, they gain in absurdity and exaggeration. Drink coffee in the morning? You’re morning coffee-pilled. Enjoy surfing Zillow to check out houses you can’t afford? Zillow-pilled.

Everybody is pilled, one way or another.

Why are we so awash in pills? It must be that the image or function of a medicinal tablet relates to the ways we transmit information and ideology; it’s a resonance that goes far beyond the plot of a slick action film from 1999. No doubt the pill is a convenient shorthand in a nation that has been overprescribed all kinds of drugs — opioid painkillers being the most tragic example. It also makes sense for younger generations that are increasingly open about their own diagnoses and pharmaceutical regimens: Even if you don’t have depression, ADHD or an anxiety disorder, you can probably name the pills commonly used to treat those conditions. The skyrocketing costs of health care in America, and lack of access to it, have also made us more pill-conscious.

Then there is the matter of how a pill is taken: by mouth. A subtle implication of this rampant “pilling” is that what we say and think always has a source, someone who has fed us the principle or dogma we now live by. This is explicit in the case of the red pill, which endures because men who have taken it turn their attention to the uninitiated, and collaborate amongst themselves to further seed the “realization” that men are oppressed. The idea is that once a critical mass has been appropriately red-pilled, they can successfully revolt — overthrowing feminism, social justice movements and any other “woke” political factions.

What the broader adoption of pilled language tells us, however, is that toxic men and reactionaries can never own this kind of influence. Our attitudes are reshaped daily by so many stimuli — objects, chemicals, art, media, environments, direct experience and other people — that it’s unusual to give yourself over to any single one, as red-pill culture demands. Moreover, we have begun to instinctively recognize how platforms and algorithms push us toward polar extremes. To list the various pills you’ve swallowed is to wink at the forces of manipulation and admit that you, too, are susceptible to them — but you’re self-aware, and still have agency. Even if we can’t maintain control over how we think, we can at least understand how we got there.