The Netflix doc ‘Behind the Curve’ has convinced me that the Flat Earth cause is more like a fandom-based e-commerce scheme than a collaborative investigation. What if they’re in this thing just to sell each other Flat Earth gear?

The Netflix documentary Behind the Curve is a touchingly empathetic look at people obsessed with “Flat Earth” theories, which reject the widespread consensus that the Earth is a globe. Apart from the charge to engage seriously with this movement — something I haven’t managed to do — the best part of the film is how many times the Flat Earthers disprove their own ideas with elaborate experiments.

Well, that and the amazing T-shirts they all wear.

Pretty much every truther interviewed in Behind the Curve, keen to get their message out loud and clear, cycles through a closet’s worth of Flat Earth shirts. Also featured is Chris Pontius, an artist who builds Flat Earth models, clocks and other fine art — he says interest in his business is booming thanks to the documentary. Etsy sellers offer Flat Earth keychains, posters, birthday cards, infant onesies, anti-NASA hoodies (NASA being public enemy No. 1 in the community) and, my personal favorite item, a Flat Earth world map to replace the misleading one that comes with the board game Risk. 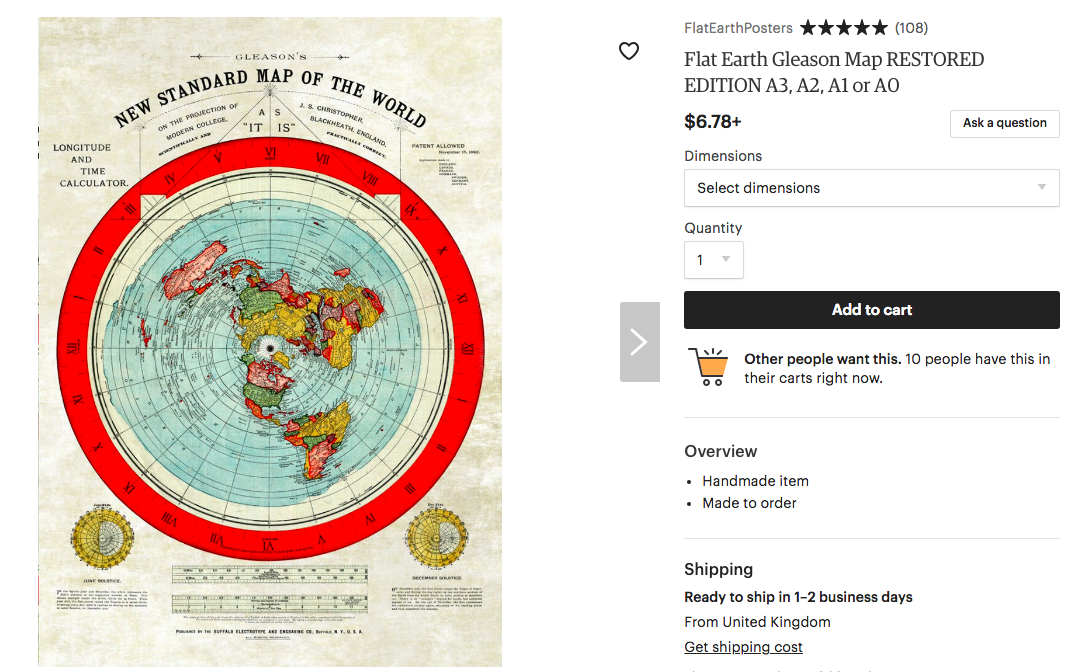 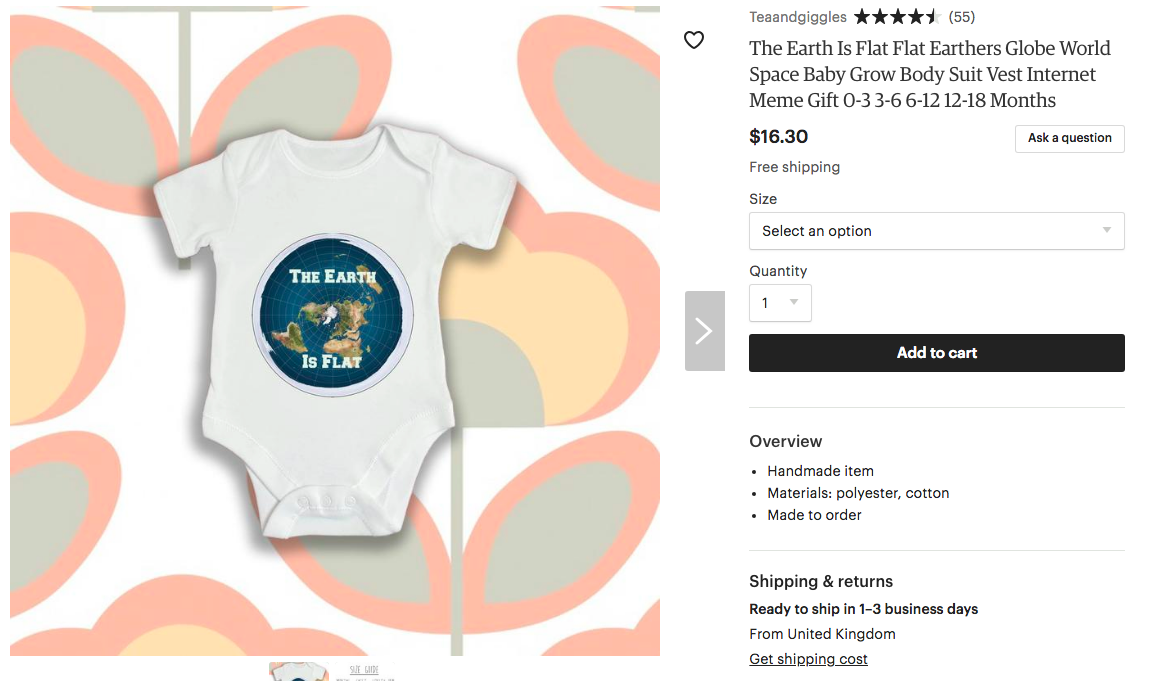 While skepticism of a globe-shaped planet is more alarmingly common than you’d think, especially among younger adults, recent conferences on Flat Earth research have drawn just several hundred attendees. There’s reason to suspect that the market for these products is quite small, and yet — as the footage from Behind the Curve suggests — eager to spend on junk that plugs their cause. (Mark Sargent, one of the prominent theorists in the movie, at one point proudly shows off an “ITSFLAT” vanity license plate.)

All this contributes to my sense that the Flat Earth cause is more like a fandom-based e-commerce scheme than a collaborative investigation. What if they’re in this thing just to sell each other Flat Earth gear? What if the real conspiracy is that the higher-ups don’t believe their own bullshit but profit handsomely off it?

And what of globe loyalists like me, who kinda want to buy and wear a Flat Earth shirt ironically? I now realize this would only help to spread the idea, or even invite a stranger to approach and start explaining why they, too, refuse to admit we live on a spinning ball. 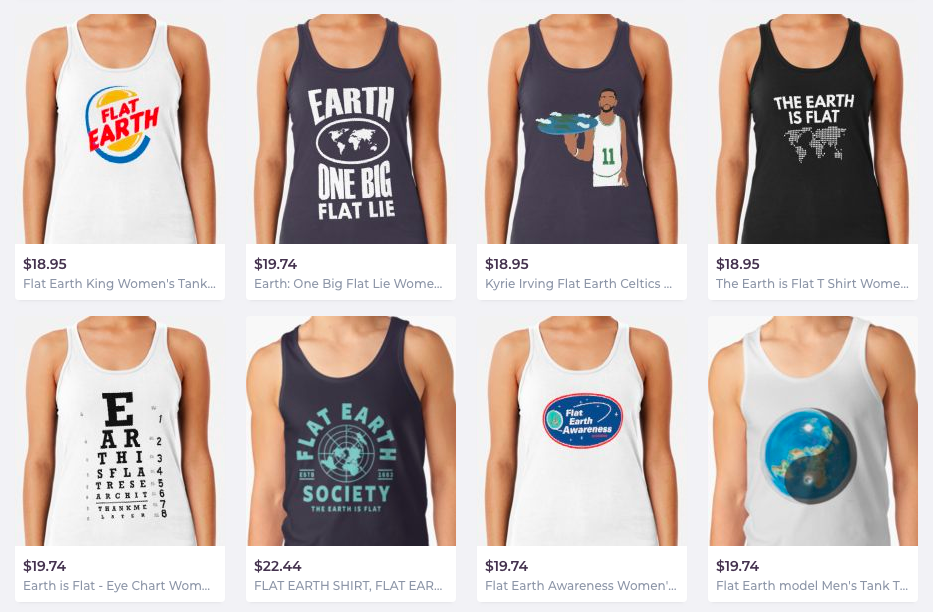 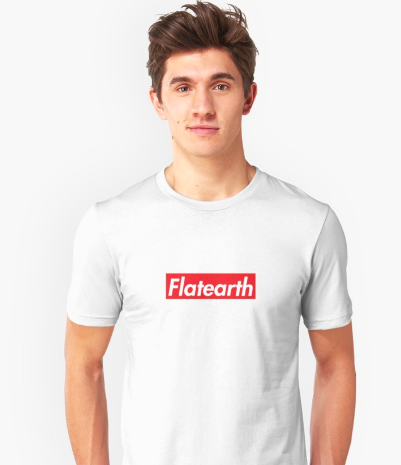 With the flickers of self-awareness you see from the subjects of Behind the Curve, it’s possible to imagine we’re all being gamed here. The Flat Earthers may well be “trolling you to victory,” as one observer had it — reaping YouTube subscribers and views with each bump to their national profile. In a sense, any exposure is good exposure for them, because it will lead someone, somewhere, to start “questioning everything.” They speak of Flat Earth as evangelists, as if they have “woken up” from a mass delusion, much like the red-pill misogyny bros who want to alert an oblivious society to the corrosive effects of feminism. But unlike those dudes, they share a worldview that can feel disarmingly cute in its wrongness. It’s the kind of thing NBA stars are happy to share their opinion on (which in turn generates more T-shirts). Are they serious, or just playing a joke? Either way, the topic is out there.

And the merch — the wildly proliferating collectibles and clothes — is an entry point to the subculture. Groups like the Flat Earth Society host stores full of magnets and kitchenware emblazoned with their logos. No shortage of this stuff on Amazon, either. You can forget about attending any kind of Flat Earth meetup without the appropriate attire; you’ll just look like some kind of government plant. The uniform is everything, a visual reminder that while Flat Earthers disagree on a few minor details (including the existence of a dome that contains our sky), they are bound by one great truth.

So yeah, this is what I’m into now: Flat Earth propaganda being a front for a vast and sprawling T-shirt economy. Can the Flat Earth people prove me wrong? Of course not — I’m 1 million percent correct. They don’t want you to know the truth. But with your help, I can get the facts out. We must educate the world. If you’re on my side, go ahead and share this article on Twitter and Facebook and make a YouTube video responding to it — game that algorithm, truth-tellers.