A new meme emerges for Election Day 2018: venting your rage at those irritating campaign texts

Unless you’re the kind of person who, at any time of day or night, has a few dozen unread texts from friends and admirers — congratulations if so — you’ve likely been annoyed by robotexts from political campaigns as the 2018 midterms come to a close. Besides making you feel mildly popular for a fraction of a second, these texts can be legally dicey: Florida gubernatorial candidate Ron DeSantis and Beto O’Rourke, who is running to oust Sen. Ted Cruz in Texas, have been slapped with lawsuits for sending unwanted messages that allegedly violate of the Telephone Consumer Protection Act. O’Rourke was also targeted by trolls who sent a hoax mass text, supposedly on his behalf, seeking volunteers to transport undocumented immigrants to the polls to vote.

Despite its glaring issues, the robotext strategy has never been more popular, and campaign operatives see it as a better path to constituents than social media — or a more efficient alternative to knocking on doors. These organizers have “been boosted,” NBC reports, by “software that allows volunteers to send thousands of texts an hour without violating federal rules about bulk texting.” In other words, regulation hasn’t exactly kept pace with virtual canvassing.

But are the texts even paying off? Um… 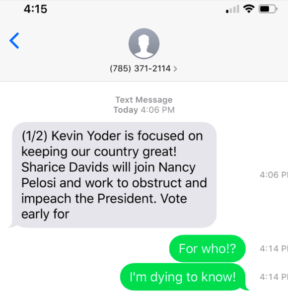 See, the theoretical advantage to the robotext — like those fundraising emails from Obama that address you by name, as if you were in the Choom Gang together — is the personal touch. This is, after all, how we typically contact and set plans with the people in our lives. Realistically, however, it’s like having a flyer slipped under your door: a more or less benign yet desperate invasion of private space. Whether or not we support the candidate or initiative, we’re irritated — or now tempted to vote the opposite way.

Besides, texting is a two-way street. You can’t spam an entire state with your last-minute talking points and not expect a response. Yet few campaigns have bothered to facilitate any meaningful dialogue. I replied to every robotext I received in the past week, and when this did trigger a follow-up, it never quite recognized what I’d said.

So maybe this isn’t the technological breakthrough that politicians and lobbyists were hoping for. Still I’m just one shithead in a sea of uninformed voters. To get a broader sense of how the Robotext Election is playing out, we turn to Twitter’s @repliestohustle.

Hustle is a mass-texting app widely credited with mobilizing the youth for Bernie Sanders in 2016, and the company denies Republican clients, prizing its reputation for progressivism. When you respond to a Hustle text, you’re meant to be connected to an actual human. But as this unaffiliated account demonstrates, that too isn’t always enough to make for functional interactions. “Campaign staffers across the country are using Hustle to text voters,” the bio states. “It goes… about how you would think.”

Could it be that these robotexts — in a country ravaged by gerrymandering, voter suppression and elected leaders who won’t represent our needs or face our questions in a public setting — have given us a much-needed way to vent? There’s no doubt about it. The act of casting a ballot can feel so futile and frustrating; many races come down to a choice between two bad options. And along come some autodialers to pressure you one way or the other. If it were a person ringing your doorbell, you might politely brush them off, or simply not get off the couch. With a generic anonymous text, however, there’s little to inhibit an abusive answer in the form of a non-iMessage SMS.

It’s not like this will change anything, either. It’s only the illusion that somewhere, someone will have to acknowledge your anger — the anger that rarely penetrates the elite bubbles of government circlejerkery and graft, the anger at a collapsing republic that burns $5 billion for no good reason.

When even countrywide protests are dismissed as artificial spectacle, we’re eager for access to any avenue of participatory democracy, anywhere to use our voices. God forbid we one day have to vote on our phones, as some would apparently prefer. Better we use them to tell off machines and strangers. 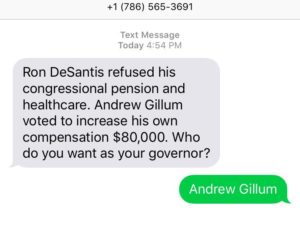