‘My mom basically only ate this cabbage omelet while growing up in Taiwan. Thing is, she really hated it, but she told me, ‘We had nothing else.’’

Frank Shyong is a columnist for the L.A. Times, writing about diaspora and the cultural, political and economic issues that impact ethnic communities. Born to Taiwanese immigrants, Shyong grew up outside of Nashville and moved to L.A. in 2006 for college. Shyong is the 11th in a series of men we’ve interviewed about the dishes that — either through nostalgia or comfort — fill the soul.

My mom pretty much cooked dinner every day. There would be rice, of course, a dish with egg, something with meat in it and another dish that was purely vegetables. But at least once a week, this cabbage omelet landed on the table. It’s very simple, and not heavy at all — Taiwanese people don’t prefer heavy, rich flavors like they do in regions of mainland China. It was merely cabbage fried with some savory ingredients and salt and pepper, finished with egg. My mom is someone who cooks at light speed, the kind of person who can get dinner on the table in 35 minutes. So this dish fit right into her routine.

Maybe three years ago, I asked my mom about the food she ate growing up in Taiwan. She told me this cabbage omelet was basically it. She ate cabbage constantly as a child, and it was something she actually really hated. I wondered why she ate it so often, given that fact, and she replied, “Well, we had nothing else.”

My mom’s father was incapacitated by a car accident early in his life and that left my grandma to take care of the family by herself — five children in Hsinchu, Taiwan. This was back in the 1960s, and apparently it was very hard for people during that era. The Communist government had just taken over in China, sending nationalists fleeing into Taiwan, which created total chaos in the villages and big food shortages. It was still incredibly rural with dirt roads, surrounded by rice paddies. It’s not the image you associate with modern Taiwan, the place I grew up visiting.

That was the first time I really learned the origins of my family. My mom said her mother would do odd jobs for people in exchange for eggs. At the home, they had a vegetable garden but harvested a lot of cabbage because it grew quickly and in large volume. My mom told me about having to work in the summers between elementary school in order to afford books, and those stories made me realize that, well, we have stereotypes about the “typical Asian mom” but what we’re really talking about is a set of behaviors that are shaped by the experience of hardship and poverty. I saw this scarcity mindset form that a person can’t ever let go of.

My parents came to America in the mid-1980s, so I’ve asked her, why keep eating this cabbage omelet here, too? I think it just reminded her of her family — the good, the bad and everything else. It’s a connection from her stove to my grandma’s wok back in Taiwan. In fact, when she goes back to Taiwan to take care of my grandma, she still makes it for her. So while I’ll never know the words to interpret it exactly — and I know I’ll never get the words from my mom — the conclusion I have to draw is yeah, she’s still looking for that reminder.

When I was young, it felt like food was something that was kind of a burden. I had to eat Chinese food all the time, and when we went out, it was for Chinese food, too. It’s not like I hated the stuff. It just felt like a burden in the sense that my family didn’t do things the same way as the people around me in Tennessee. Your culture and the food your family eats is something that keeps you from fitting in, and when you’re 16 and trying to date girls, it became a social conflict I kept focusing on. But for my parents, I think eating the food of their homeland was something they did instinctively — as if it made them feel right or proper. I keep thinking of that one phrase: Chinese people carry their homes in their stomachs. I can’t imagine what my parents’ cravings were like, but I’ve spent time abroad and know that point at which you really, really start craving a burger or a burrito, and you’re so crestfallen by the options available. I imagine it was a lot like that, for a lot longer time.

The omelet helped me later in life, too. When I graduated from college, I was very poor, sleeping in living rooms and freelancing for cash, trying to get an internship. I had to cook meals that cost little money. So I followed my mom’s formula, but I often used tomatoes instead of cabbage. I hated tomatoes growing up, so it’s kind of funny that I made that version but never the cabbage omelet. I just don’t buy cabbage. I don’t know what to do with it, to be honest. I’d rather eat a more nutritious type of green (laughs). 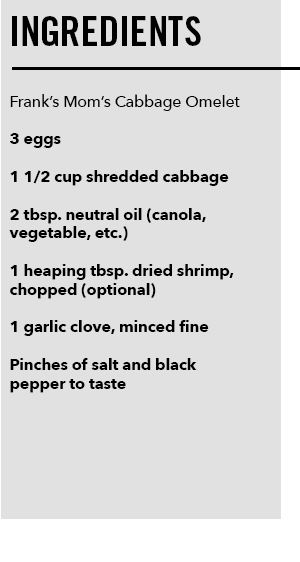 This is a very basic recipe that you can use to clear out all sorts of veggies and odd garnishes from the fridge, in keeping with the dish’s pragmatic nature. First, heat a small wok or a medium-sized frying pan (about 8 inches, preferably nonstick) over medium-high heat. Add the oil after a minute and swirl to coat the bottom and sides of the pan.

When the oil is glimmering and hot, add the garlic and dried shrimp (if you have it) and let the two sizzle and start to turn golden. Then toss in the cabbage, season with hefty pinches of salt and pepper and mix so the greens begin to wilt in the heat.

Crack and beat your eggs in a bowl, and when the cabbage has lost some volume but still has a little crunch, pour the eggs into the pan. Stir vigorously for the next 10 seconds, then shake the pan to level the mixture flat. Add a little more oil around the edge of the pan if you see anything sticking. Otherwise, cook the eggs over medium-high heat until you can lift an edge and confirm the bottom is golden and crusty. Flip the omelet once to briefly cook the other side, then slide out onto a plate and eat.