‘It’s an amazing feeling to blend things together that you feel has no way, no right, to be delicious’

Kent Rollins is a chuckwagon cook who has been featured on TV and has his own successful YouTube channel. Born and raised in an Oklahoma ranching family, Rollins carries the torch for cowboy culture and is an award-winning storyteller. He also once beat fancy-pants chef Bobby Flay in a country-fried steak showdown. Rollins is 10th in a series of men we’ve interviewed about the dishes that — either through nostalgia or comfort — fill the soul.

I was born into a family of farmers and ranchers. My dad grew up in the Dust Bowl and survived through the Great Depression. He always told me that we grew up with grit — not only in our teeth and in our eyes, but deep in our soul, too. I’m glad I didn’t have to go through it, but I’m very thankful for those who did and I think they did pass on a little bit of it to me.

We lived on the Red River in an old two-story house and a great big barn. It was my mother who taught me how to cook, starting when I was seven, maybe eight years old. I did go out horseback a lot at that age, but once in awhile, I got to stay at the house with my mother. I enjoyed cooking, even though I wasn’t really aware I’d have to wash that many dishes when we were done.

We led a modest life, and when you sat down at our table, it was one of them deals where mom always had enough — you just needed to make sure you got your share. She always used to tell us, “We have grace and we have manners, and we’re going to say grace and you better have manners or I won’t let you go outside.” It was simple food, but we never ran out. She was a little-bitty woman with a heart of gold who was as strong as anything in the world, and a great cook who never used a recipe.

I’ve been in this work and culture my whole life. By the early 1980s, I’d worked on a lot of cattle on a lot of ranches and eaten off a lot wagons. Some had fairly good food, and others weren’t good at all. But around that time, I decided to start cooking for other people when I was guiding drives in the southwest of New Mexico. The cook was, and is, a very important person on a drive — I was making $50 a day instead of $25. That’s when I found a chuck wagon and decided to buy it. I’ve been cooking ever since.

Cowboys are the greatest people to experiment on because they can’t go nowhere. When you’re out in the middle of 300,000 acres, there ain’t no place else for them to eat. And one winter we got snowed in on the place. We was going to stay three weeks, but ended up being there about four and a half. So I had to figure out groceries and ration things. I got low on a lot of stuff but still had about 200 pounds of ‘taters.

About those ‘taters, I ended up needing to fix a potato dish one day, but it was snowing and we had no oil or nothing to fry them in. I got looking around and found a bottle of Sprite under a table that one of them cowboys was using to mix up a drink. I couldn’t fry with it, but I could bake with it. So we mixed a little bacon, some jalapeño and some garlic in there, and we called it sparkling potatoes.

It was a long, long time ago I prepared it for the first time. It’s still a dish that I love to cook just for us cowboys. It’s an amazing feeling to blend things together that you feel has no way, no right, to be delicious. Whether it’s meat or a vegetable, if you can combine certain things to make all the ingredients taste better in the end, well, you done knocked a home run.

There aren’t many chuckwagon cooks out there now. There’s a lot of ranching, less so the long cattle drives. When the railroads came in back in the late 1880s, it changed things. But with commercial trucking now, there’s no need to drive cattle 1,400 miles somewhere. Still, there’s a lot of these smaller ranches — 15,000 or 20,000 acres — that are running cattle the way it’s always been done, because the only way to work the cattle is a man on horseback.

If that’s the case, you need someone out there to feed ‘em. And that’s a guy like me, with a wagon and a team of horses. 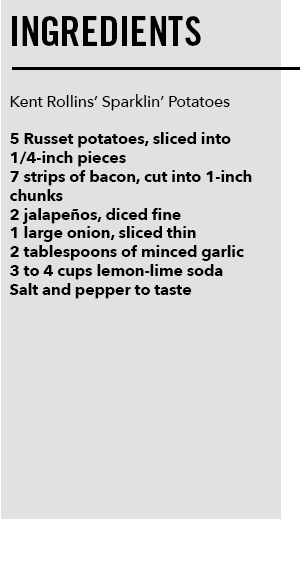 Preheat the oven to 400 degrees. As it’s heating, prepare all the ingredients, adding the sliced potatoes into a bowl of cold water to wash off some starch. Heat a large cast iron skillet (a big steel pan or wide pot is fine, too) over medium heat and add the chopped bacon. Keep an eye on the bacon as it fries — you want the fat to melt without burning the bacon. After a few minutes, add the vegetables and cook until the onion begins to turn translucent. The bacon should be beginning to crisp by now. Turn off the heat and set aside.

Place a layer of potatoes in the bottom of a casserole dish. Then spoon over some bacon-veg mixture and sprinkle everything with a heavy pinch of salt and pepper (a seasoning salt or BBQ rub works great as a zestier alternative to plain salt, by the way). Repeat the layers, and then pour the soda in — the liquid should be about halfway up the casserole. Top with tin foil and throw in the oven for 20 minutes. Take the foil off, give everything a mix and place back in the oven for another 20 minutes or until the potatoes are fork-tender. Taste one last time for seasoning, and serve hot.