What’s in a name? Entire relationships, it seems. Because calling your significant other by the syllables that appear on their birth certificate can come to feel a little dull, not to mention dryly formal, we cook up terms of endearment that reassert some deeper intimacy. The effort that goes into this creative process, and into the repetitive use that enshrines the pet name as an understood, automatic piece of affection, varies person to person. But in general, however simple or unspecific the the lovey-dovey pseudonym is, both of you are given to think that it applies nowhere outside the current partnership.

Relationships end, however, and when a new one starts to blossom, you are faced with a very important choice: Are you going to devise new pet names, or recycle the old? The latter strategy may appeal to the lazy or unimaginative, but it’s not without risk.

Nevertheless, some monikers are guaranteed to stay in the mix for your entire dating/marriage career. When I asked folks on Twitter and Reddit to volunteer their go-to, universal romantic nicknames, a lot of replies included the old standbys “babe” and “baby,” and even “beautiful.” (It’s hard to say why we like to infantilize the people we sleep with, though I guess the practice is common enough that we don’t think about it much anymore.) For my part, the word “baby” is too attached to my ex, as we deployed it in an exaggeratedly obnoxious way: “What’s shakin’, BAYBEH?” Others are dead set against presumably well-worn generic labels like “bae” and “boo.” Maybe all “B” names are suspect.

Reviving a nickname from a prior bout of passion gets even dicier, though, when we come to less-common titles. One redditor’s eyebrows were raised when her boyfriend called her “angel,” same as with the last girlfriend. “I recycled ‘sunshine’ across a number of exes,” another redditor reports, and they’re not alone, either: “I’ve used ‘sunshine’ in a previous relationship, and in my potential next one I’m tempted to use it again. Sometimes people light up your life,” a like-minded person wrote in a different thread. One guy had an entire archive to draw on during any long-term relationship. 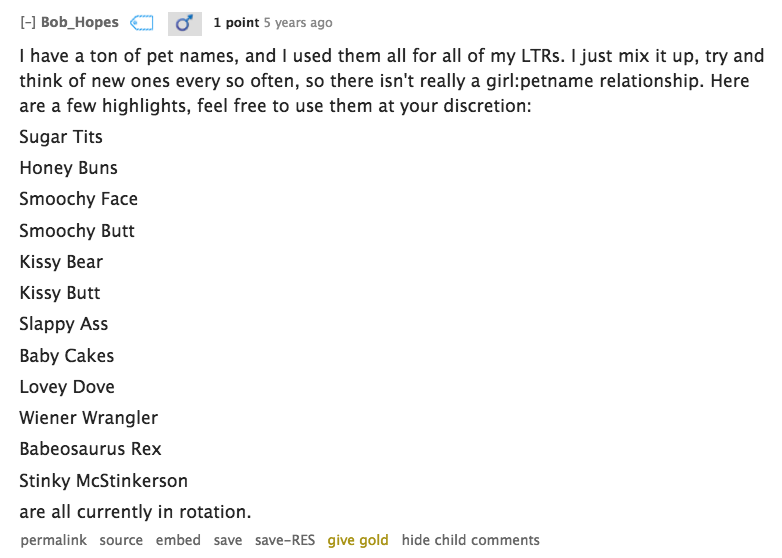 Overall, there are three major schools of pet name philosophy. The first rejects the convention altogether: “I’ve never understood why anyone would want to refer to someone as something other than their name unless they just can’t remember that person’s name,” one redditor said. “I call people at work dude, buddy, guy, etc., because I can’t remember their names, not because I want to give that guy in accounting a sweet nickname.” A tad humorless, perhaps, but not unreasonable. The second position is to concede that nicknames will always resurface, consciously or not. I hadn’t realized until I read the tweet below, for example, that I’ve kept a teasing “goober” from years past.

To get around this problem, you can repeat a linguistic technique without repeating an actual term. I’m intrigued by this habit of needlessly elongating a shortened name:

Or going the specialized botanical route:

Otherwise, may as well just lean into your categories. Some names don’t get old.

The third school attempts a militant resistance to any name creep, no matter how theoretically trivial, even if it’s as basic as “honey” or “sweetie.” (I myself use neither, because my mom relies heavily on both when addressing me or my siblings, and it would sound like I was doing a weird impression of her.) Writes one Reddit dude: “I try not to recycle specific inside jokes and names between women. It feels kinda sleazy.” Certainly noble, and, judging by the devious attitude of some recyclers, well-justified.

Could one ever make a compelling case for carrying a pet name forward into a new romance, especially if it had a singular resonance before? Won’t it always be akin to emotional baggage, or an attempt to undermine the bond, or a hint that you see the partner as a replaceable stand-in? Actually, yes, but only under this very pure condition:

I confess I’m partial to the animal-based names these days. My girlfriend is my “little fox,” or “squeaky otter,” or occasionally just “kitten.” Which isn’t to everyone’s tastes.

Sorry. I try not to say it in public, at least. More importantly, when I get dumped for being a dumbass loser, nobody else will take the alias “kitten.” The name gets retired like an athlete’s jersey. This isn’t only a matter of covering my tracks. It’s called respect, babe.