Is There Any Kitchenware More Contentious Than the Cast Iron?

People my age like to tell young folks that things change in your 30s. Hangovers get worse, Tom Petty sounds better and you develop fairly militant opinions on everything from bath towels to the ideal houseplants. I’ve lived through a good number of these transitions, though none, perhaps, have illuminated the mind as moving in with a partner who believes the gospel of the cast iron skillet — an element of cookware that epitomizes the no-nonsense, grown-up kitchen.

The internet is choked with listicles explaining why anyone who doesn’t have a cast iron pan is robbing themselves of culinary bliss, but I’ll give you the shortest possible pitch: A cast iron pan is cheap, indestructible, naturally non-stick and ideally suited to preparation of one-pan meals. It heats evenly, and you can move it from stove to oven. It’s so versatile an object that the owner is inclined to ignore or get frustrated with other types of pans. Individual cast iron skillets, when they acquire seasoning from extensive use, take on the patina of history itself; in some families, to inherit the skillet grandma used to make her cornbread is seen as a fantastic honor.

And yet, there is a dark side to the cult of the cast iron pan… for those who refuse to see the light, that is.

Novice and amateur chefs have often tried the fabled skillet, only to feel deceived and embarrassed. “Cast iron pans are a meme and I fell for it,” a redditor complained on r/cooking a while back, writing that everything — especially eggs — got stuck to the surface. Ultimately, they concluded, it was a lot of hipster nonsense, and they’d rather “go with the easier option over some self smug feeling of ‘ye olde time cookware is better, and [I’m] cooler for using it.’”

While some agreed that cast iron is “overrated,” the faithful were there, as ever, to point out the dissatisfied customer’s probable mistakes. “The learning curve for me was to wait until the skillet was hot before starting to cook in it,” a disciple commented, with the infinite patience and serenity of a music nerd hoping to convince you that avant-garde opera is worth a listen. 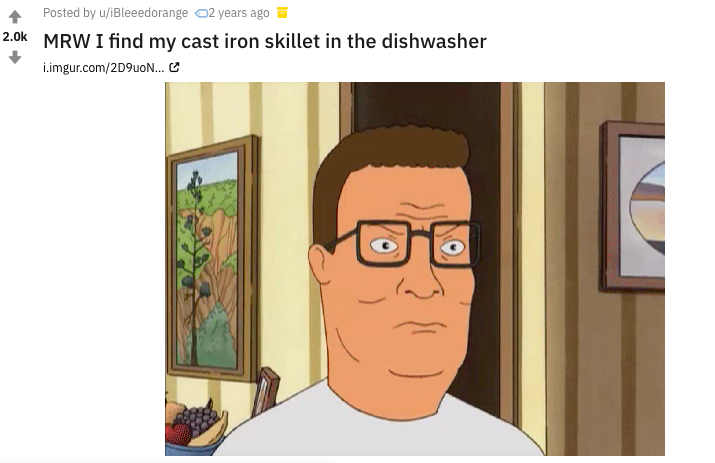 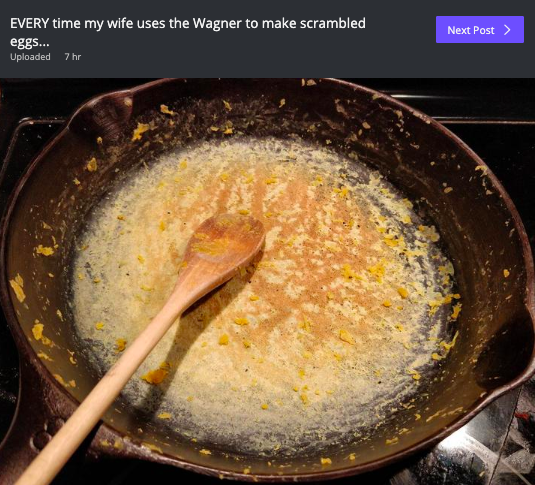 The tension cuts both ways, however. In a domestic scenario where one cohabitant has profound reverence for the cast iron, but another barely understands its advantages, it is the devotee who typically suffers. The matter of cleaning the skillet is paramount in these struggles, because washing it with soap or in the dishwasher is a cardinal sin that erodes the bed of hard-won seasoning and brings on rust. The proper method relies on just hot water, plus a stiff brush or sponge, and some good old-fashioned elbow grease. And although this is a simple procedure, it’s somewhat at odds with the time-honored tradition of letting all the dirty plates, pots and pans soak in your sink for a couple of days. The person who disregards the cast iron’s needs is in for a scouring lesson. Even in mutually pro-cast iron households, arguments arise: Maddie, my girlfriend, once tried to call me out for letting our pan sit in water for several hours, then had to relent when I accurately described her habit of doing exactly this. How dare she!

Our touchiness around the skillet is far from unique, and probably the basis for an undercurrent of jokes that nettle cast iron evangelists for being snobbish, fetishistic and basically insufferable. 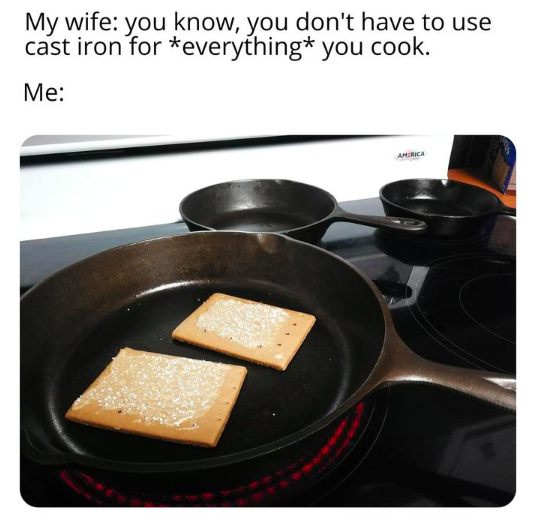 If there’s a long-running war here, it seems likely that the cast iron forces will have the last laugh. Sure, it’s easy to provoke them into a rage with no more than a Twitter shitpost that casually dismisses the crown jewel of their cooking arsenal. And while taking care of a cast iron isn’t as difficult as the haters argue, the people who grow extra-protective of their pan might come off as high-maintenance themselves. But in the final analysis, they’re experiencing — whether this is the objective truth or not — an elevated kind of food.

Would it change anything if the cast iron skillet were a mere placebo in the overall chemistry of the kitchen? I doubt it. Faith in this vintage metal is actually its own reward, and that satisfaction doesn’t diminish in familiarity. Moreover, each meal served up in the cast iron pan adds to both its layers of oil and the chef’s accumulated respect for their trusted companion in years of appetizing adventures.

No dogged snark will rob the cast iron crowd of this rapport, and so, in a way, the dissenters are never heard above the sizzle of a juicy steak. Now and then, a sympathetic soul may persuade them of the error of their ways. Still, for the most part, we are too happy and well-fed to care. 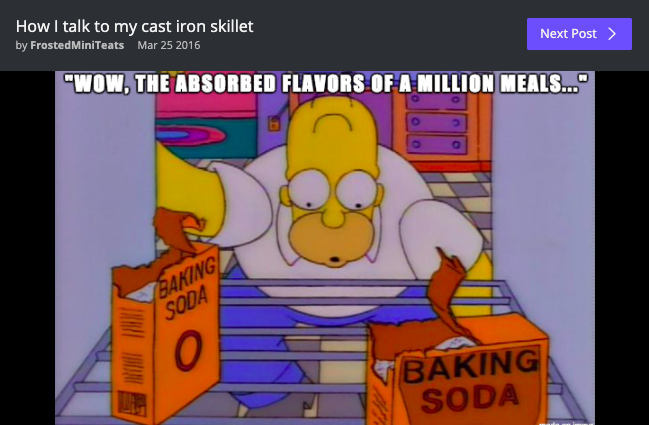 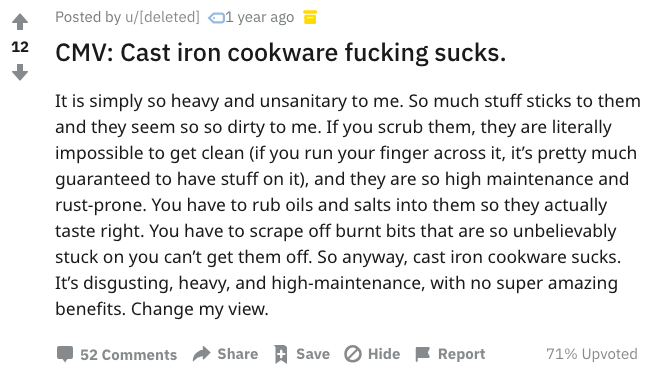