Ben Sandoval is the co-owner and chef (along with his wife Debbie) of the popular Tiwa Kitchen at the historical Taos Pueblo site in New Mexico. His Native roots in this pueblo, famed for its protected traditions and its influence in the American Southwest, stretches back generations. Sandoval is the first in a trio of people we’ve interviewed who bring a uniquely cultural perspective — and dish — to the Thanksgiving holiday.

I’m a resident here at Taos Pueblo, and I grew up in the pueblo, getting an education from elders about our way of life. One important foundation is that we plant and grow our own food. We’ve been doing that for many generations — a thousand years of growing our corn and other staples to survive and thrive.

Now, the introduction of supermarkets changed a lot of that. It was probably when I was a young kid, maybe in the 1950s, when we started to realize there were a lot more stores downtown, three miles away from our home. We used to trade corn, beans and all kinds of native foods with some of the smaller stores in town. But with big shops opening up, it forced a lot of smaller, local farmers to close up shop. Our people depended on the growing and harvest seasons to sell or trade for other goods. That way of life got slammed. It’s even worse today — some of our people only depend on supermarket foods. So we gotta do something to bring our agriculture back, and bring back our own healthy goods.

That’s how I came to think, Maybe if I get a restaurant going, I can keep us growing. Sure enough, it’s worked. We’ve influenced a lot of people to plant and grow, rather than depending on the outside world. (I call it the outside world because our lands are permanent lands that we’ve occupied for 6,000 years; we weren’t moved here, so we don’t call it a reservation.) We proudly offer buffalo, for instance, because the meat comes from our own herds, owned by the tribe.

This time of year, we’ve already brought in the harvest. We do a lot of our outdoor oven-baked bread, and we do a lot of frybreads. We also make harvest stews. Our famous red chile stew is probably the best for Thanksgiving, made with chiles that we sun-dry and grind into a powder. There are so many varieties of chile that grow here. We get some from the Southern Buffalo Indians that live along the Rio Grande. They’re our brothers and sisters who have also survived for thousands of years, and they’re part of our big family here of 19 pueblos. So basically, I don’t have to go anywhere to buy chiles. If I want them, I get some seeds.

You know, according to some of the history that was written by the Spanish priests when they first arrived in this area, they found a lot of chile growing already. I’m thinking some of it was brought over by tribes that went as far as South America. Other folks have different stories, but the point is, the chile has been part of our history for a long time.

As for Thanksgiving, well, I did grow up with it. As a little kid, I’d think, Oh, it’s Thanksgiving day. I’m going to get dressed up like a turkey. That’s how we grew up. We didn’t have a choice. Of course, according to the old folks here, we didn’t have Thanksgiving. There was no such thing, because we were simply not part of any tribe that worked with pilgrims somewhere up north. We’re a different tribe. But it became a national thing, and a lot of Natives didn’t understand why. I get that it’s supposed to heal wounds, bring people to the table and create a good day for one day. Our people did get assimilated; we were taught Catholicism, as one big example, so it all kind of goes together. But my grandma never celebrated Thanksgiving. That family treated it like a regular day.

Today, we do close the restaurant for Thanksgiving to celebrate. I don’t mind it because we give thanks, as expected, but we also take the time to offer food to our people that have passed away. That’s what makes it meaningful now. I don’t think, Damn those pilgrims. Some people, though, don’t celebrate, because the pain lingers. 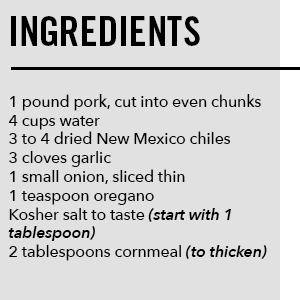 Note: At Tiwa Kitchen, Ben and his wife Debbie (the chef) dry their own homegrown red chiles to grind into powder. For simplicity’s sake, we’ll stick to using whole dried New Mexicos, but feel free to experiment with all kinds of medium-heat dried chiles. Also worth consideration: Buying chile products from local businesses that support indigenous farmers.

Gently toast the chiles in a medium-hot pan or by waving them over a lit burner. Remove the stem and seeds, place the chiles into a bowl, add just enough water to cover and microwave until the water boils (about 2 minutes). Let sit for 30 minutes to steep.

While that’s hanging out, add the meat and four cups of water to a pot and place over high heat until the mix comes up to a boil. Reduce the heat until it’s simmering, put a lid on it and let it go for 30 minutes.

Once they’re ready, dump the chiles, garlic and oregano into a blender and blitz it until it becomes a smooth paste. Heat up another medium pot on high heat, then add a drizzle of oil and the sliced onion. Sauté until they start to brown, then add the chile paste, cornmeal and a cup of broth from the bubbling meat. Whisk quickly to smooth the mix out, then add the rest of the broth and pork. Let it simmer, uncovered, for another 30 minutes or until the pork is very tender and the sauce has thickened up (you can always add water if it reduces too much).