Bebop and Rocksteady Are the Most Beautiful Love Story Ever Told

‘I think maybe they were lovers’ — actor Cam Clarke, the original voice of the Ninja Turtles’ mutant rhino nemesis, Rocksteady

Over the course of the original Teenage Mutant Ninja Turtles cartoon, the mobile fortress known as the Technodrome found itself sunk at the bottom of the ocean, frozen at the North Pole, stuck in the Earth’s core and repeatedly stranded in the desolate Dimension X. Throughout this time, the villainous Shredder planned his revenge against the Turtles and Krang plotted global domination, but as for their mutant henchmen Bebop and Rocksteady, all they had was each other, and the beautiful friendship (and possibly more?) that they shared.

Before their mutation into a mutant warthog and rhinoceros, Bebop and Rocksteady were nothing more than a couple of street punks working for the Shredder, but after a humiliating defeat at the hands of the Ninja Turtles, Shredder decided that he needed mutants of his own to even the odds. But whereas most of us probably wouldn’t like being turned into a hideous half-human, half-animal hybrid, Bebop and Rocksteady liked the transformation, and were more than content to remain that way.

Despite their mutations, Bebop and Rocksteady continued to fail the Shredder at every turn. Their clumsiness and dimwittedness no doubt contributed to their setbacks, but being in the employ of Shredder and Krang was hardly conducive to success. The two were repeatedly subject to insults from their bosses, regularly being called “morons,” “bug-brains,” “cretins,” “bumbling ignoramuses” and “blithering blister-brains,” to name just a few. That, coupled with physical abuse and no apparent hourly wage, made being employed in the Technodrome a more than hostile work environment.

Bebop and Rocksteady may also have suffered from a lack of motivation. Career advancement was clearly not an option; still, they didn’t seem too interested in their employers’ plans for global domination either. Sure, they liked busting heads and stealing magical crystals — that made for some cheap thrills — but in their leisure time, all Bebop and Rocksteady wanted to do was chill in their room, play video games and read comic books. Given all that, it makes one think that instead of being evil arch-villains, Bebop and Rocksteady were just two best buds with lousy jobs.

They weren’t all bad, either. In most incarnations of the characters, at some point they contemplated being heroes instead of villains, even if they weren’t particularly good at it. Additionally, Bebop and Rocksteady repeatedly showed themselves to be surprisingly considerate pet owners — in the original cartoon, when Bebop got a pet turtle, Rocksteady helped him to conceal it from the boss. In a 1991 comic book, Rocksteady got a pet bird that hung out on his head. They even adopted a pet velociraptor in a recent issue of the IDW comics series. And, in one of their most tender moments in the original cartoon, Bebop was heartbroken when his pet ice monster, Frosty, melted, and it was Rocksteady who came to comfort Bebop in his time of need.

It’s this dynamic that made the Bebop and Rocksteady friendship so unique. Whereas Krang and Shredder’s partnership was full of backstabbing opportunism, Bebop and Rocksteady were oddly supportive to one another, and their companionship was downright beautiful. As Michelangelo put it in a recent comic book, “They’re literally monsters with zero conscience, but they are also kind of sweet in their way.” 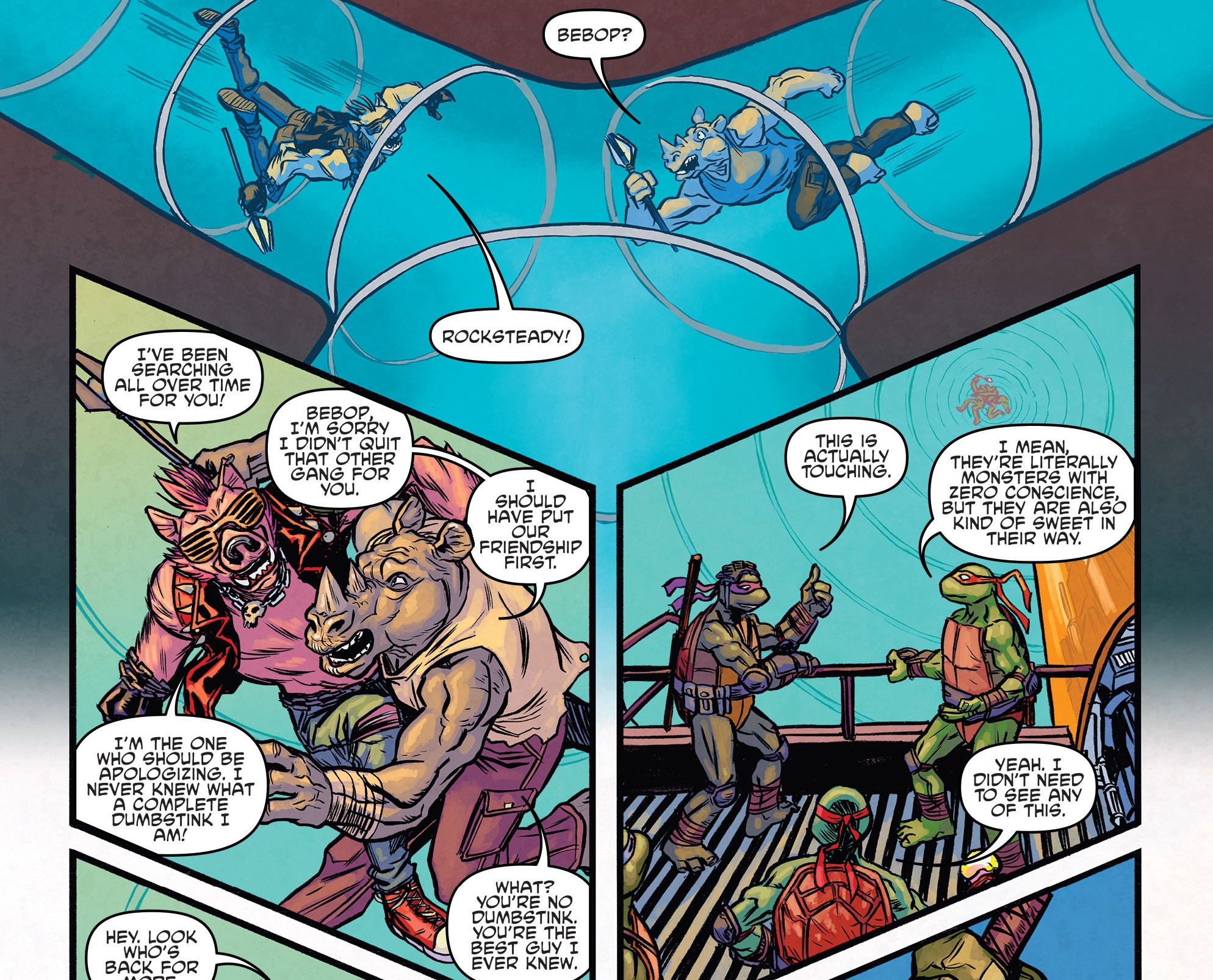 Indeed, while the duo are certainly best friends, they also downright love each other and that love is so strong, it has permeated the entirety of the Teenage Mutant Ninja Turtles multiverse.

Starting with their first iteration in the original cartoon, voice actor Cam Clarke — who voiced both Leonardo and Rocksteady — tells me that he feels Bebop and Rocksteady weren’t so bad, just misunderstood. “Rocksteady was a big baby,” he says. “If his gun ever hit its target, I think he’d burst into tears.” As for Rocksteady’s relationship with Bebop, Clarke adds, “I think maybe they were lovers,” before comparing the ambiguous nature of their friendship to Bert and Ernie. Trevor Zammit, the Teenage Mutant Ninja Turtles brand manager at Neca Toys, makes the exact same comparison, saying, “They do kind of have a Bert and Ernie relationship, and they do share the same room in the Technodrome.”

Whether or not their friendship extended into the romantic is just a matter of idle speculation, of course, but there’s no reason it shouldn’t be true. Despite occasional references to “past girlfriends” in various incarnations of the characters, following their mutations, Bebop and Rocksteady are monstrously stronger and larger than regular humans, so practically speaking, there wouldn’t be many options besides each other. Also, with all their time stranded in the Technodrome, they certainly weren’t getting busy with the abusive Shredder or the gelatinous Krang (whose only body opening is filled with jagged teeth). I mean, maybe a robotic Foot Soldier could have operated as a sex robot, but neither Rocksteady nor Bebop would have the technical know-how to reprogram them for such purposes.

If you want more concrete evidence, I found this 1989 Teenage Mutant Ninja Turtles Valentine’s Day card that shows the two of them surrounded in hearts with the caption, “We were made for each other!” and features an uncharacteristically shirtless Rocksteady (well, that technically seems to be a color error, but seriously, look how cute they are here!). This possibly romantic angle also seems to be supported in a newer iteration of the characters, namely the 2012 Nickelodeon cartoon series. It featured a different take on the characters (including a Russian Rocksteady), but as the series progressed, the two grew closer, even becoming roommates, much like their classic iteration. In their final story arc of that cartoon, the duo are hired by the Shredder and Krang of the original cartoon and become subject to the same kinds of insults that their classic counterparts were. At one moment, when both are lamenting the abuses of their new employer, the two share a supportive hug in a sweet, quiet moment in an elevator.

Later on, when they’re finally accepted as equals by the classic Shredder and Krang, the two join hands and are again surrounded by hearts.

Peter Di Cicco, one of the writers on the 2012 cartoon, including this story arc, says, “It’s great how the fans have interpreted their friendship. On one hand, some see it as two guys with a great friendship, and others really want it to be a gay relationship, which I’m all for.” He adds though, that he hesitates to confirm such a thing, especially since it wasn’t specifically represented on the show itself, and that declaring such things after the fact is “an unfair way to show that representation.”

For comic creators Dustin Weaver and Ben Bates, they perhaps dug the deepest into Bebop and Rocksteady’s friendship in their miniseries Bebop and Rocksteady Destroy Everything, where the mutant duo got ahold of a time scepter and proceeded to break every rule of time travel, creating all kinds of paradoxes and the like. At its center, though, the story was about the friendship of Bebop and Rocksteady, who fight, break up and then tear apart the space-time continuum in an effort to reunite with one another.

“I see them as brothers,” says Weaver. “Their friendship goes way back and that friendship is key to understanding them. They’re kindred spirits, I guess you could say.” As for Bates, he says that, to him, “Bebop and Rocksteady are the embodiment of pure friendship. A lot of friendships are fairly shallow and can’t survive any conflict, but they can fight, verbally and physically, and it only deepens their bond.”

This brotherly camaraderie was also the sole bright spot in the otherwise pretty terrible 2016 film Teenage Mutant Ninja Turtles: Out of the Shadows. Once again, Bebop and Rocksteady were violent yet happy monsters, who spent the film slapping each other’s bellies, showing each other their new tails and slurping spaghetti together like a gleefully disgusting Lady and the Tramp. (Also, in probably their most relatable moment, as soon as the duo are mutated, the first thing they do is check to be sure their dicks are still intact.)

Once again on the sweeter side, there’s also this recently produced short by Nickelodeon, which features Rocksteady singing while sitting on a piano that Bebop is playing, as the two harmonize on their status as BFFs.

Perhaps the purest version of the Bebop and Rocksteady friendship, however, came about in the old Teenage Mutant Ninja Turtles Adventures comic published by Archie Comics in the early 1990s. In this version, the pair began much like they did in the original cartoon, but later on, Bebop and Rocksteady become stranded on a primitive jungle planet. Free to embrace their wild nature, they shed their Earthly clothes and become free-roaming nudists. 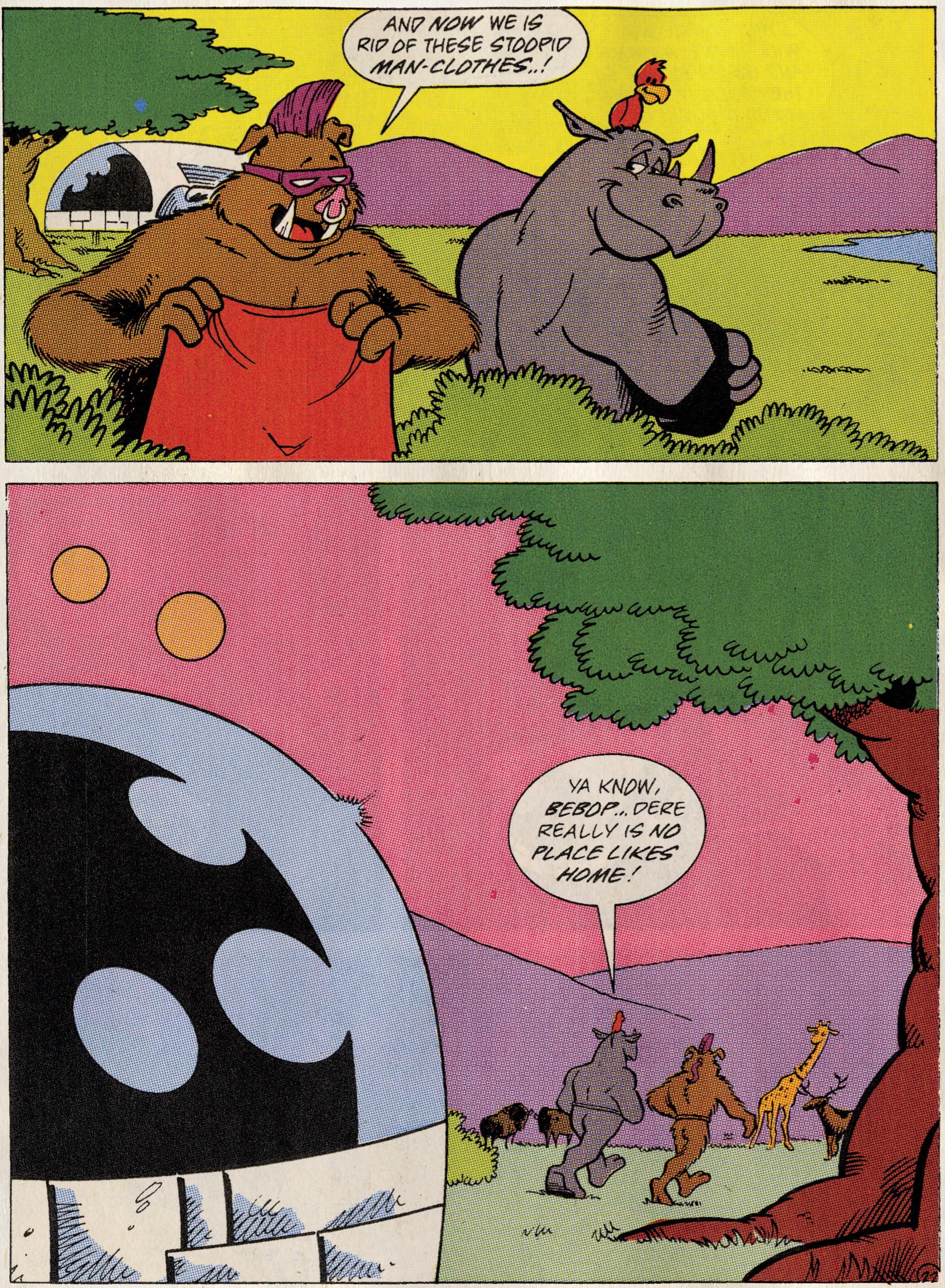 Surprisingly, the once-bloodthirsty villains seemed to find peace and tranquility in this paradise and were more than content to remain there. They only returned to Earth twice more in that continuity. The first time they raided the Central Park Zoo — where their animal counterparts originated — and busted out all of the animals, bringing them back to their planet. The next time, they returned to Earth just to get some potato chips (which were unavailable on their jungle planet). On that second trip, they don’t engage in violence at all, even after Raphael attacks them.

As for why this track was taken in the Archie series, artist Chris Allan explains that it was all a part of the environmentally conscious messaging of that series. Additionally, he says, “I have no evidence if Bebop and Rocksteady were or weren’t gay, but I do think the two grew up in a time where such an attraction wouldn’t be allowed. And, if they did want to give into some of those urges that may or may not have been there, being naked on a planet with just the two of them around would be a great place to do it.”

Which is why this version of Bebop and Rocksteady, to me, represents perhaps the truest form of their friendship. After all, not only are they free from the abusive employment of Shredder and Krang, they’re also unburdened by the constraints of the modern world, like getting jobs and having to pay rent. On this peaceful, primitive world, the bizarre duo is able to flourish, free of conflict and adversity — and more importantly, free to love each other, however they see fit.