The British Guys Who LARP as American Cowboys

In the town of Deadwood, around 10 miles away from London’s Gatwick Airport, a battle to save the human race is taking place. On one side are the Angels of Death, who have just emerged from the gates of hell with a vengeance. They carry deadly weapons, capable of not only wiping out all human life, but capturing their souls for eternity. On the other side are the only people with a fighting chance of stopping them: a group of middle-aged British guys dressed up in cowboy gear.

“Y’all need to get out of here before you regret it!” shouts one of the cowboys in an accent that briefly passes for John Wayne before breaking back into his natural Brummie. “Fear God, be gone!” says another, not hiding his British accent, who’s dressed in Wranglers, a tan-fringed suede jacket and a cowboy hat made of worn brown leather. He lifts his shotgun, aims directly at the winged angels and fires. A loud bang pierces the air and the sour stench of smoke emits from the barrel, but the angels don’t flinch. “You cannot destroy us!” they laugh.

For the townspeople of Deadwood, such events have become frequent. Just this year alone, the town has been visited by European invaders seeking to poison the town’s water supply and demons from parallel dimensions seeking to cause mischief and chaos.

In all these cases, the only people who have been able to keep the town safe — and atone for its sins — are this band of British cowboys. 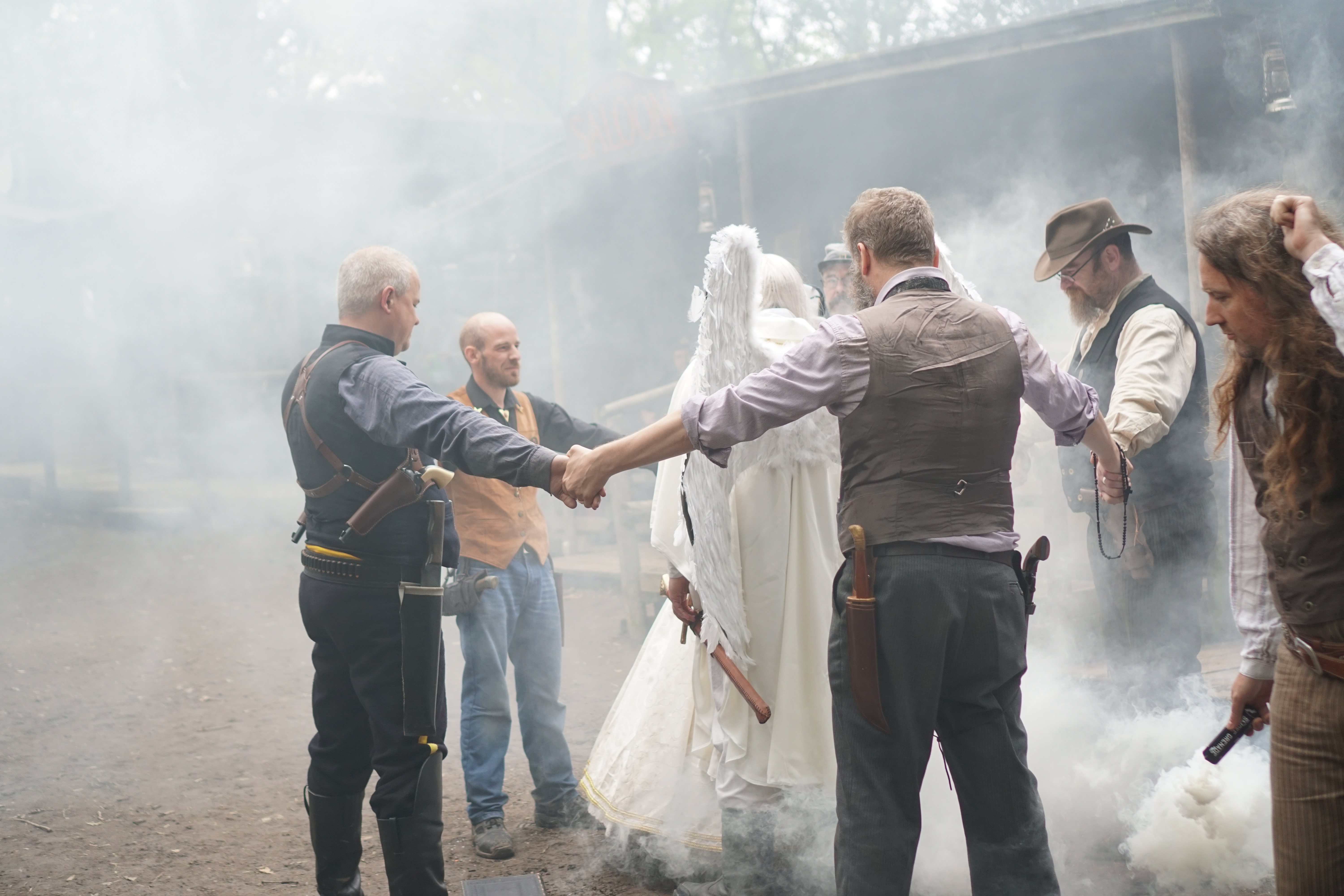 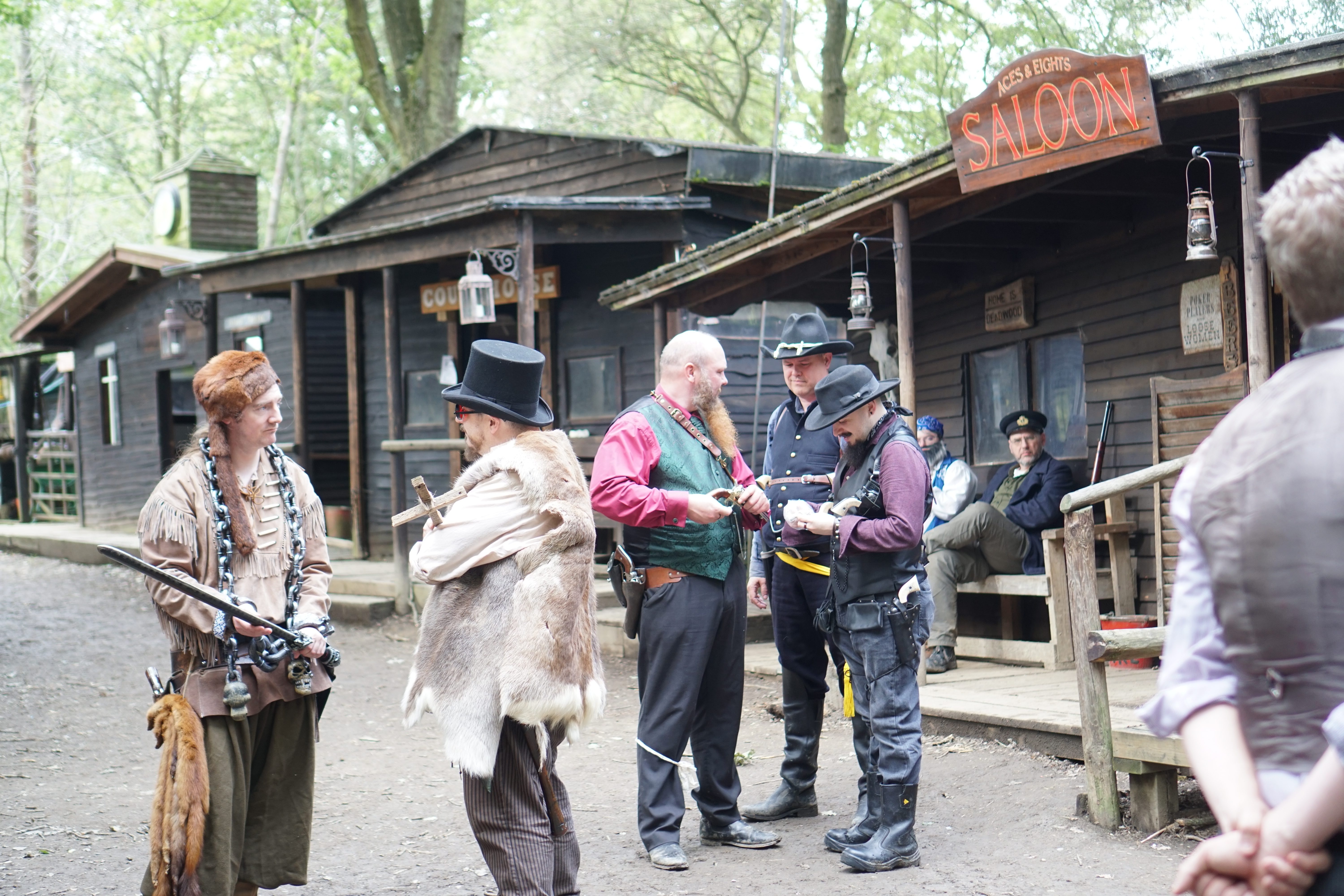 Deadwood is obviously fictional. It’s actually located on a small farm and campsite in the sleepy English village of Horsham. It’s a grey, August afternoon, and I’m here to observe “The Good, the Bad and the Dead,” one of the U.K.’s fastest growing live-action role-play games.

While LARP is often associated with re-enactments of medieval history, the Civil War and futuristic science fiction, this game is the only one in Britain to be set directly in the American Wild West. One weekend a month, dozens of guys from across the U.K. flock to this farm and trade their regular lives as office workers, partners and fathers for plaid shirts, Stetson hats and leather boots. They live off a diet of beef-and-dumpling stew and home-brewed moonshine. In the evenings, the cowboys hang out in Deadwood’s saloon bar, singing old songs like “Ridin’ Down the Canyon” to the strum of banjos and acoustic guitars.

This isn’t simply a cowboy-inspired camping experience either. “The game is, at its heart, in the genre of fantasy and sci-fi,” says founder and organizer James Stacey, 44, who’s dressed in a red plaid shirt, black leather boots, a black cowboy hat and a blue bandana. He’s added an element of storytelling, too: While each character may start out as a familiar archetype — a stoic cowboy, a corrupt judge, a barmaid with a mysterious past — they evolve and develop, influenced by the player and the narrative as the game goes on.

What’s more, this physical environment makes it unique in the LARP world. Instead of an empty field or rented house, “The Good, the Bad and the Dead” takes place in a custom-built replica of an Old West town. Or, at least, what British people think a 19th-century American town looked like. “A lot of the photographs and posters were bought from eBay!” laughs Colin Bradford, 72, who created the Deadwood site. 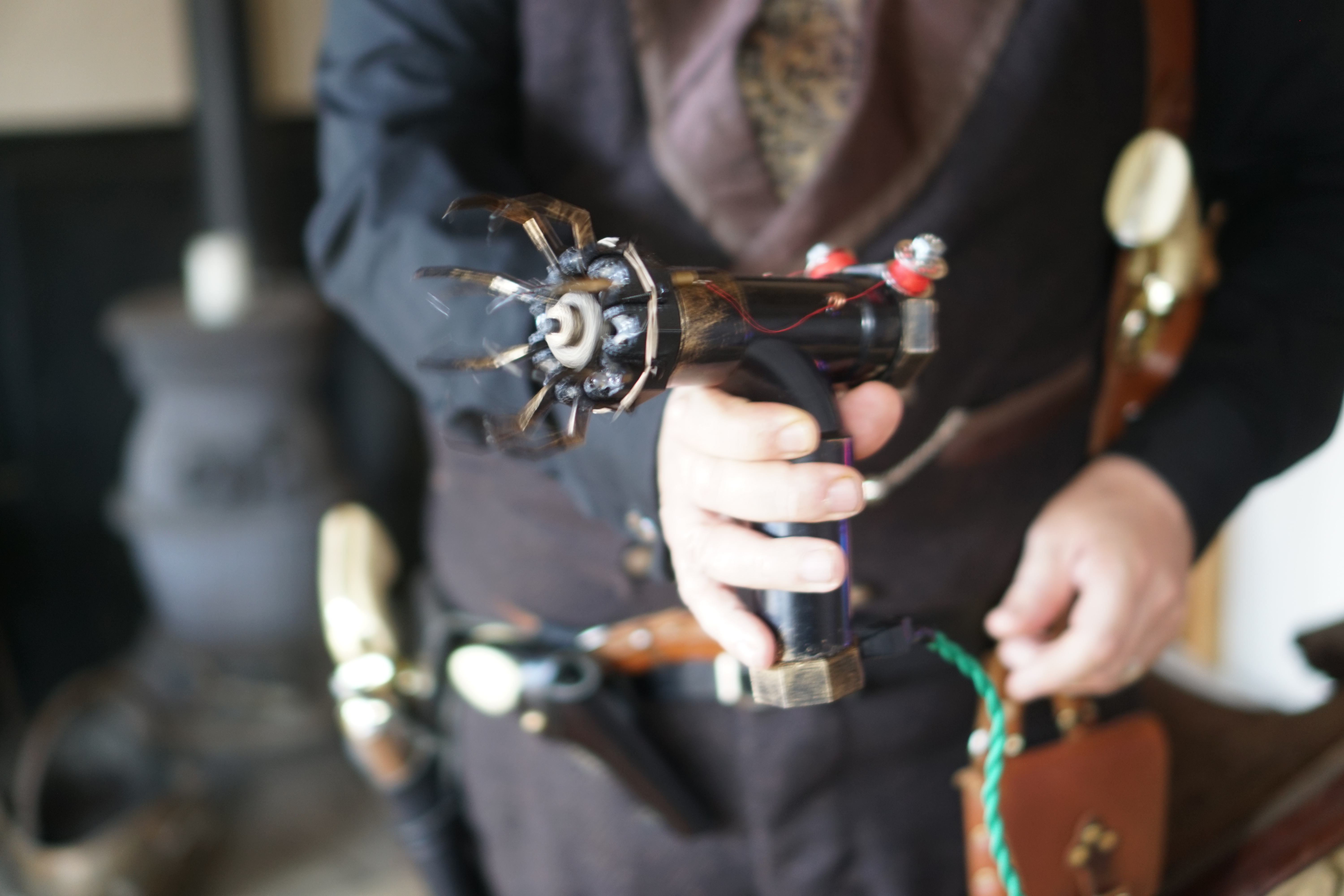 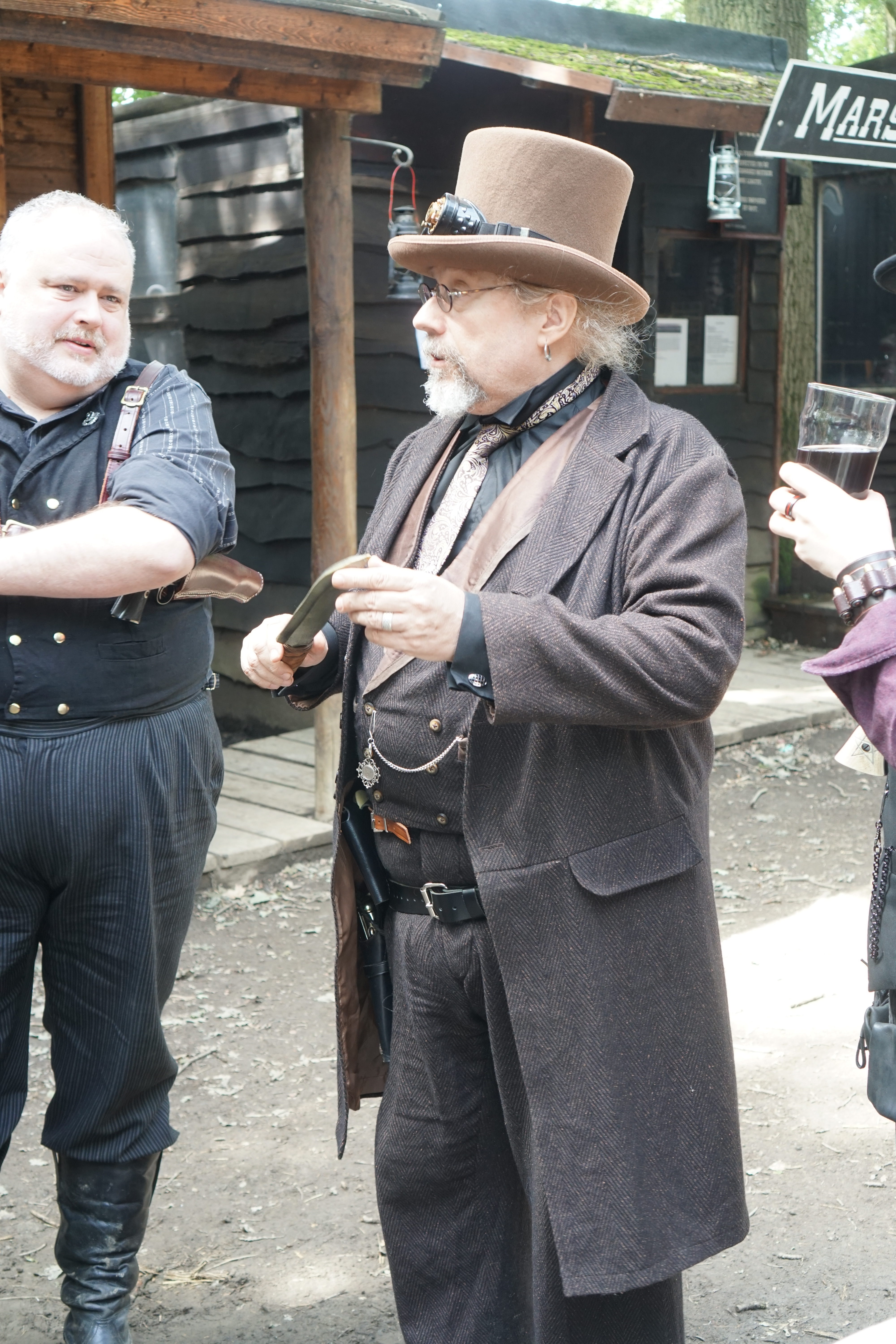 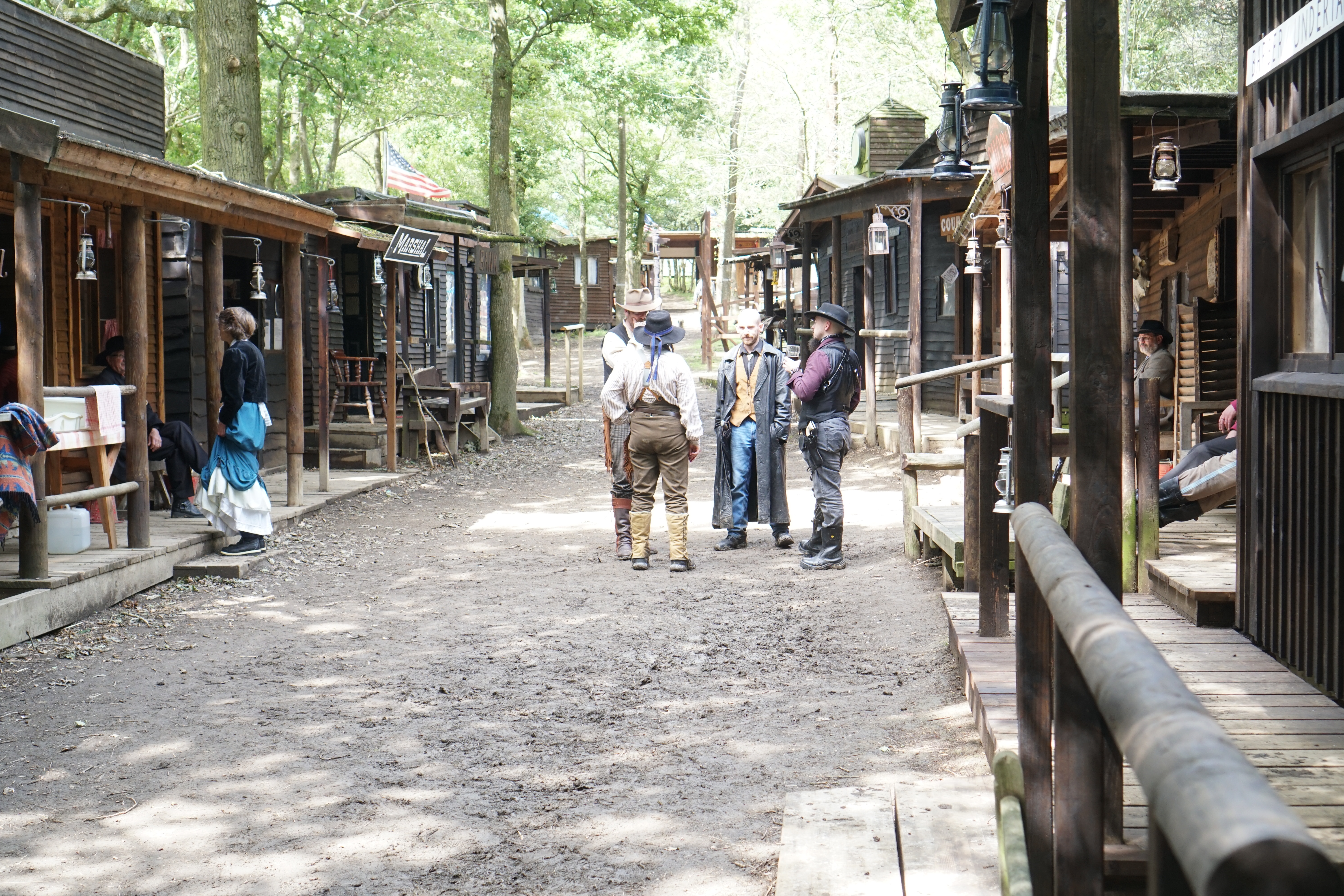 Stacey tells me that when he developed the idea for the game in 2014, it wasn’t necessarily driven by a love of all things cowboy and the Wild West. “A lot of us have been LARPing for a long time,” he explains. “We’ve played science-fiction games mostly, things like [Mass Effect: Andromeda]-inspired LARPs. Some of us have done medieval-style LARPs, World War II-inspired LARPs.”

Indeed, there’s a palpable love of history here. “I think, when [British] people think about the Wild West, they just think of cowboys, but the period is much more complicated, full of superstition and invention,” says Chalkie White, who works in a construction crew in Birmingham by day. In this game, White plays a character called Professor Polidori, an eccentric scientist known for his bizarre, futuristic inventions, including a time machine that might have been responsible for opening the gates of hell.

While White is a longtime LARP-er, others have found an opportunity to indulge in a hobby seldom catered to in Britain. Daniel, a 58-year-old carpenter from Northampton, describes his character as a nameless cowboy who moonlights as a “mysterious sorcerer, with abilities like black magic and summoning spirits.” For him, “The Good, the Bad and the Dead” offers a chance to indulge his passions in “the way of life in the Old West.” His character doesn’t really fit the whole “cowboy-hero archetype,” though — he’s “more of a quiet observer, someone who intervenes when the town really needs him.”

“You wouldn’t think that Brits would be into cowboys all that much!” says Bradford, the Deadwood creator, as he guides me through the town’s “Information and Tourism Centre”; its walls are covered in ads for steam railways in Nebraska and job opportunities to dig for gold in California. But in the 1970s and 1980s, Bradford explains, American movies like The Magnificent Seven and Butch Cassidy and the Sundance Kid became popular and gave many Brits their first taste of American life. “Before then, if you wanted to show you were a brave man, you’d pretend to be a soldier from the World Wars,” he says. “But the idea of being a cowboy — being lawless and dangerous — was more exciting to youngsters.”

Bradford isn’t a LARP-er, but on the weekends, he and his family come to Deadwood in their cowboy gear and play as townspeople. They cook and serve food and keep the tin canisters of coffee piping hot. It’s a role they happily play. Bradford credits the cowboy LARP-ers with helping to keep Deadwood standing today, especially at a time when local tourism is declining. With “The Good, the Bad and the Dead,” Bradford’s witnessed a renewed interest in his lifelong passion for Westerns. Here, people “see the beauty in the Old West that I do,” he says. Deadwood is a “place where they can really explore that — to live that kind of life that I dreamed about.” 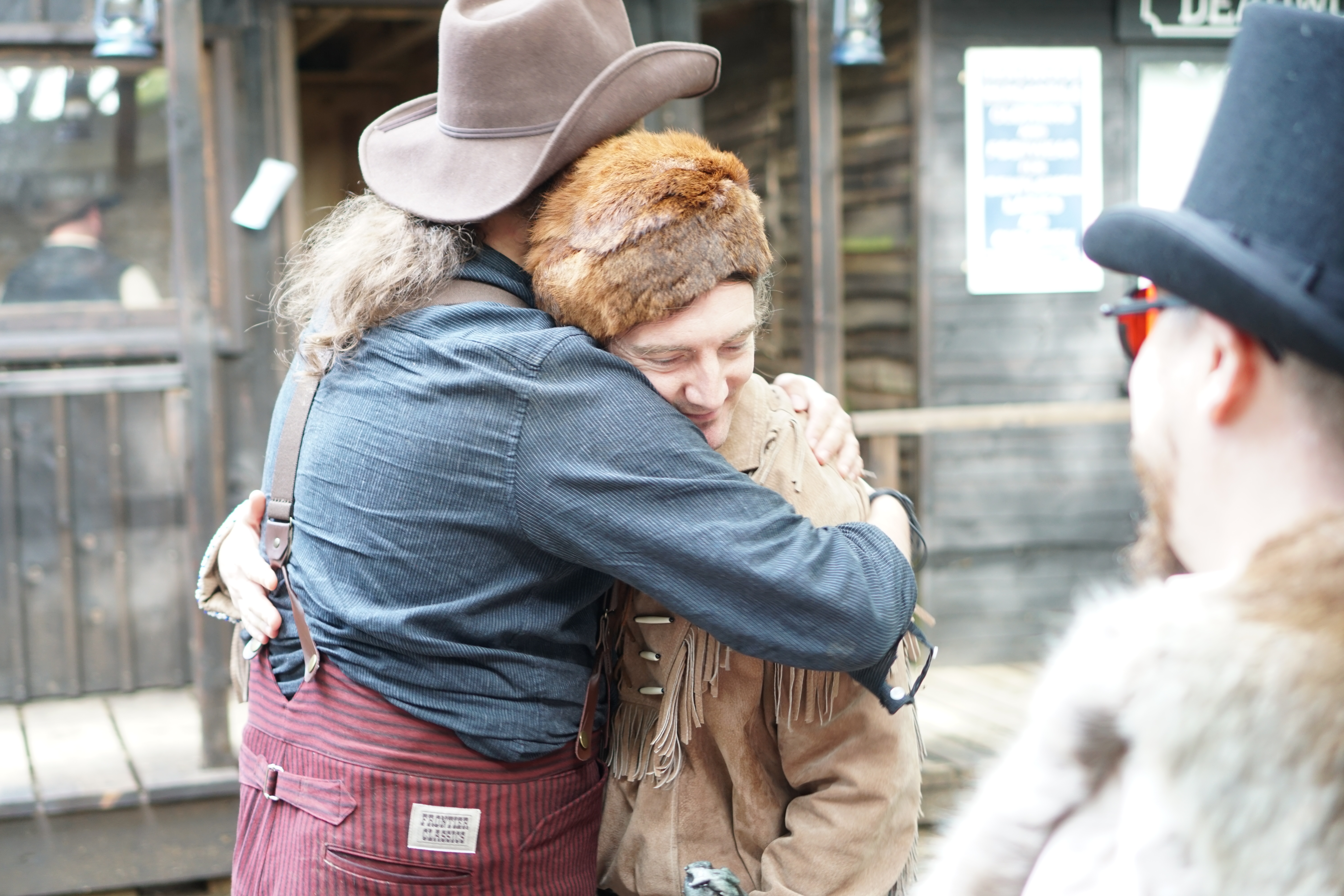 It’s the final game of 2019, and the “Angels and Demons” story arc is about to close. Stacey proudly tells me how the narratives aren’t just rooted in cowboy culture; they’re also based on Biblical stories and themes like “redemption, prayer and sacrifice.” The only difference, he says, is that players are reimagining Biblical heroes as cowboys.

He’s currently planning the next set of game scenarios for their return to Deadwood in January. At the moment, he’s writing scenarios that reference the 1845 Annexation of Texas, the Great Exhibition and the East India Company’s early excursions into the Americas, to name a few. Still, Stacey says, “I try not to make the scenarios too complicated, or grounded in deep history. It’s more of a way for the players, and me, to think about what challenges, puzzles and obstacles they have to overcome. Even then, I’m not sure what’s going to happen!”

This unpredictability only reinforces Stacey’s belief that at its core, “The Good, the Bad and the Dead” will always be a story about cowboys. “The Wild West wasn’t a specific place,” Stacey says. “It wasn’t always set in America.” Instead, “It was about ordinary people and how they dealt with extraordinary, unexpected things.”

Kind of like this game. Stacey ponders the connection, looking at the gray sky and stroking his chin. “In a lot of ways,” he says, “cowboys were basically LARP-ers!”