On Reddit’s ‘Am I the Asshole,’ Awkward Jerks Like Me Find a Path to Redemption

Subjecting yourself to public shaming can go a long way toward personal growth, experts explain

I constantly worry that I’m being an asshole. Just a few hours ago, I saw someone I know pretty well in the grocery store, but as he stopped to talk, I kept walking.

I get incredibly anxious in situations like this, I confessed to my fiancée later. Am I the asshole?

“Of course not,” she assured me. “I’m sure he didn’t even think about it.”

She was lying, I can tell.

My typical routine is to replay these awkward interactions in my mind 3,000 times until I commit another faux pas that takes its place. But what if there were a place on the internet where 565,000-plus people were waiting to judge my dumb ass? How good would it feel to know for sure that I was wrong?

Turns out, there is. It’s a subreddit called r/AmITheAsshole, and it’s soon to be my new homepage. Here, people post major life decisions like “Am I the Asshole for breaking up with him because of his job?” or small social interactions like mine, then ask a jury of redditors to decide. Some post at the behest of someone else. Others seek to relieve their tortured conscience.

The stories can get a little macabre:

There are strict rules for posting. As stated in the subreddit’s sidebar:

This sub is here for the submitter to discover what everyone else thinks of the ethics or mores of a situation. It is not here to draw people into an argument you want to have, or to defend your position. If people start saying you were the asshole, do not take that as an invitation to debate them on the subject… accept the judgment and move on.

Submissions should be TRUTHFUL descriptions of recent conflicts you’ve had or may have that need arbitration. Describe both sides in detail. Being neutral gets you more accurate feedback.

In addition, the community responds using certain abbreviated terminology before explaining their judgment:

Thus, not everyone who posts in the subreddit is deemed an asshole. It could be what they did is perfectly ethical or logical and they’re Not the Asshole, or it could be that everyone in the situation is an asshole, in which case, Everyone Sucks Here.

I was curious about the assholes. What happens after guys like me realize their error? Is there a path to redemption?

I reached out to a few designated assholes in the subreddit to find out.

One Reddit user, who asked to remain anonymous, confided in the subreddit about a comment he made to his wife:

Before deleting his account, he responded to my direct messages on Reddit. “I apologized to my wife. I’m definitely thankful to Reddit for helping me see the light,” he writes. “I’m not usually some asshole that disregards women; the stresses of new fatherhood just got to me. And the wisdom of the crowd helped me see that.”

Reddit user LifeTakesAmex inquired if he was the asshole for asking his wife to stop eating more than him. The ruling: asshole.

But the way he tells it, this was all a big misunderstanding. “When I posted it, I was in total shock [about] how quickly comments came flooding in… and how mean people were being,” he tells MEL. “I really didn’t feel like what I did was that bad. My wife and I probably overcommunicate, so she wasn’t offended after I said what I said.”

LifeTakesAmex says he “still felt bad” after telling his wife to stop eating more than him, which is why he posted in the subreddit in the first place. However, it was all for naught. “After I posted on AITA, when my wife got home from work, she knew instantly that I was ‘up to no good’ because of the look on my face. I finally told her about the post and she thought it was so funny and she had forgotten I even asked her to eat less.”

Since he’d gotten such a strong reaction of You’re the Asshole judgments, he asked if his comment upset her, and she said no. Though the discussion in the comments may have lead LifeTakesAmex and his wife to have a deeper conversation on their eating habits, he says the experience didn’t change him.

“My wife is awesome and it gave us something to joke about,” he says. “I can certainly be an ass, but I think some of the responses from redditors were worse than my post.”

For these reformed assholes to really find redemption, Dr. Claudia Luiz, a psychoanalyst based in Tarrytown, New York, and author of The Making of a Psychoanalyst, says they must first be in what she calls “growth mode.” Basically, ready to accept that they are in fact the assholes in their given situation.

“If you are in growth mode, getting feedback on your behavior will help you adapt to your environment,” she tells MEL. “So the feedback will get integrated positively, will be experienced as useful, and create change.” Luckily, for those who posted in the subreddit on their own (and not because a third party, or the victim of their asshole behavior, told them to), that means they’re already on the path to change.

If you don’t accept that, then chances are, even 1,000 commenters aren’t going to change your mind. You think what you did was right, and you won’t hear anything else. If that’s the case, she says, “the feedback could have a negative effect. You could feel incensed and outraged, deeply shamed, or even devastated.”

For example, watch as redditor u/fthatt doubles down on decidedly not doing the list of chores his girlfriend left him. 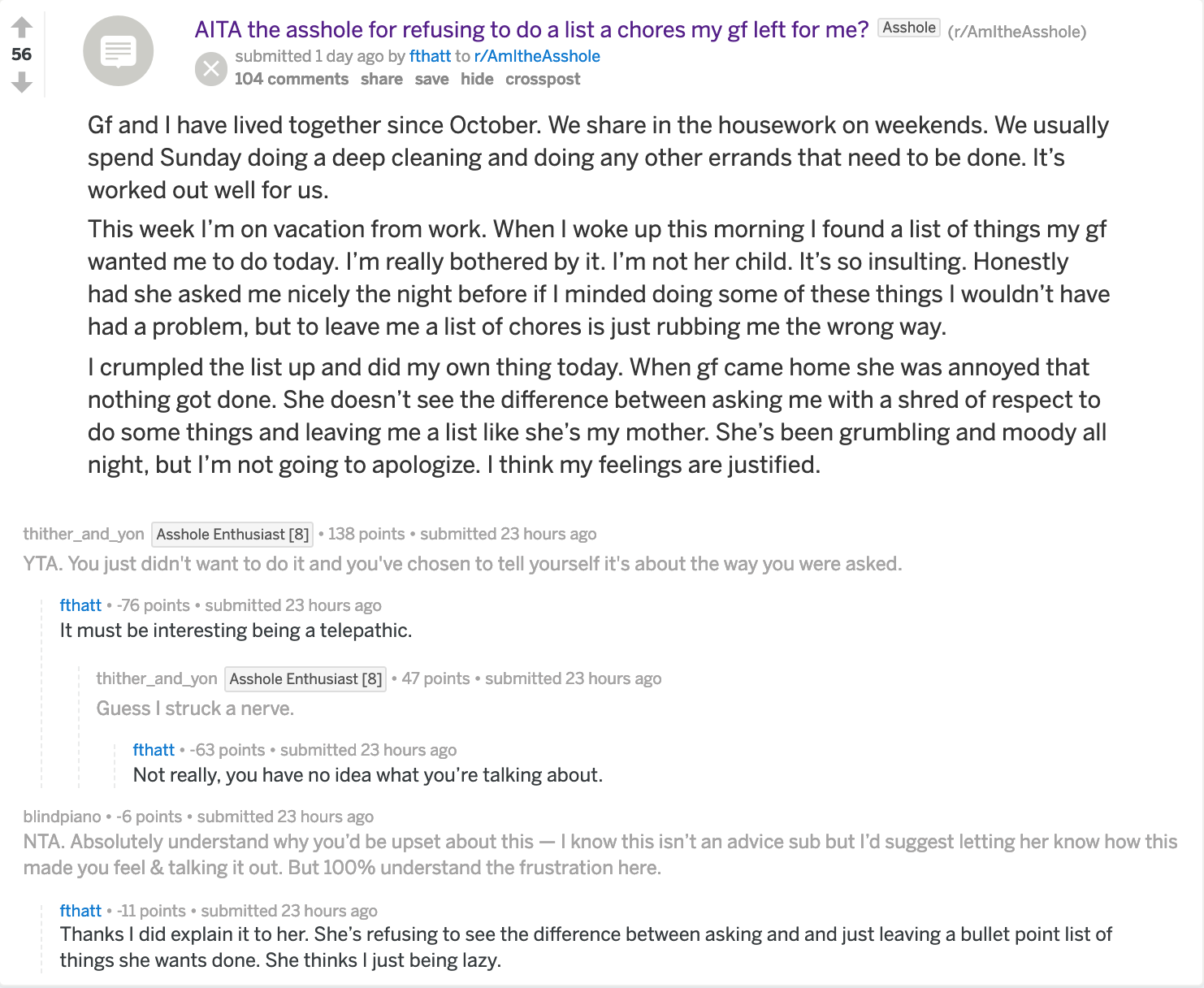 Ari Hoffman, a psychotherapist in Denver, adds that some social shaming helps here — even if the potential asshole isn’t willing to accept it.

Hoffman explains that most people rely on trusted partners or professional superiors to keep our behaviors in check — particularly to avoid embarrassment. “We have a built-in behavior agitator which, when triggered, is usually good at refining and redirecting our behavior. That agitator is called embarrassment, and one of the primary generators of embarrassment is being chastised by an entity we look up to or respect.”

A step further from embarrassment, in terms of changing one’s behavior, is shame. Hoffman explains:

“One could argue that embarrassment, while an unpleasant experience, is not an inherently damaging one. When we are embarrassed, we can maintain a basically positive sense of self and realize that our behavior was not cool for a brief and isolated period. The extreme version [of embarrassment] is shame, which can be damaging if it is inflicted repeatedly — the message conveyed when we are shamed repeatedly is that there is something inherently wrong with us.”

And where can one inflict shame upon himself over and over again? The internet, of course! “The one entity that consistently maintains its ability to embarrass us and get us to change our behavior is social opinion,” Hoffman tells MEL. “And while this power seems to wane as we get older, it is still the consistently most powerful tool to change behavior.”

In short, some swift public shaming on AITA may very well be a great social tool for personal growth.

Human behavior is so susceptible to social shaming because “historically and currently, we are safer in numbers,” Hoffman explains. “And if we are at risk of being excluded from the group, we will often do things to ensure we stay in the group.” Sure we’re not “banding together to fight off woolly mammoths,” he adds, “but there is a lot of current data that suggests that people who have healthy and rewarding social connections live longer.”

In an analysis of neanderthal DNA for History.com, Jesse Greenspan writes that neanderthals may have evolved to “lack certain genes, such as those related to hyperactivity and aggressive behavior.” Might they have publicly shamed aggressive assholes out of their society, much like AITA is doing for ours?

“The power of the collective to change behavior can be a very good thing,” Hoffman concludes, “and using subreddits like Am I the Asshole — especially when the original poster really wants to know what other people think — is prosocial and healthy.”