Lawsuits, car crashes and a hostage situation — all because Americans wanted their pizza while it was still hot

“Pizza dude’s got 30 seconds,” Michelangelo told his brother, as they stared at a full moon through a sewer grate. The year was 1990, and Domino’s promise of delivering a pizza in “30 minutes or less” was still in full effect, even after some recent bad press threatened to end the policy for good.

The slogan began inauspiciously enough more than a decade earlier, in 1979. At the time, Domino’s was lagging far behind Pizza Hut in the fast-food pizza marketplace. Since Pizza Hut didn’t deliver, Domino’s CEO and founder Tom Monaghan decided to promote that his company not only delivered, they could also get you your pizza faster than your local pizzeria.

It all seemed like a fairly safe bet: While there was no industry standard back then for pizza delivery times, Domino’s had usually been making their deliveries in less than 30 minutes anyway, so guaranteeing it seemed doable. As an added bonus for Domino’s, even when the pizzas were late, few people took them up on the free pizza, feeling it was unfair. (At the other end of the spectrum, though, some abused the policy, and turning off one’s porch lights so the driver couldn’t find them became somewhat commonplace.) In 1986, the offer was changed from free pizza to a discount of $3, hence Michelangelo proudly exclaiming, “Time’s up! Three bucks off,” when the pizza man is late in Teenage Mutant Ninja Turtles. 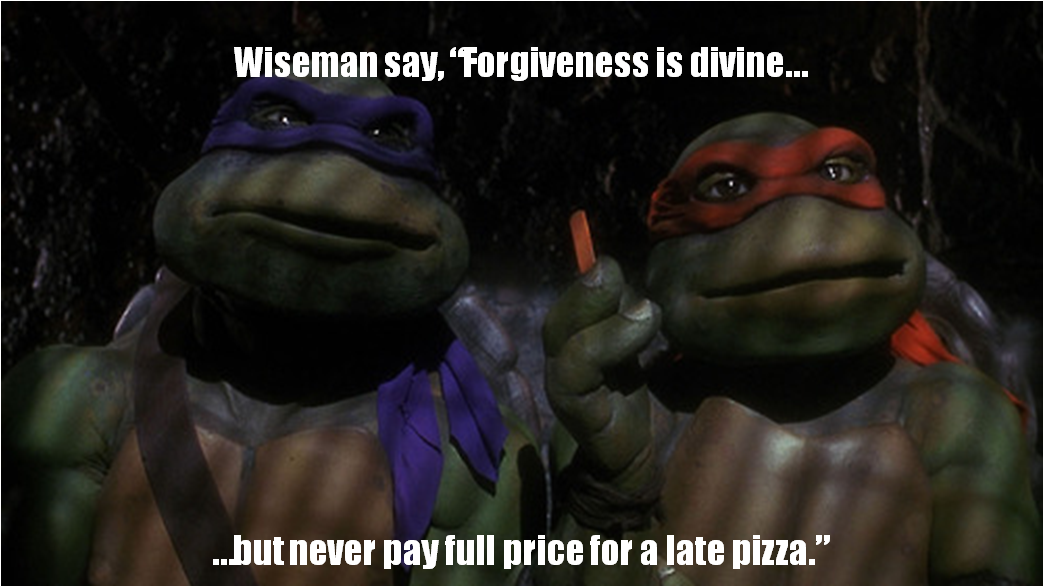 To say that “30 minutes or less” was a success would be a huge understatement. Not only did it vastly improve Domino’s market share, it ended up setting the industry standard for delivery times, which still holds today. The slogan was so catchy that it showed up in all sorts of media and persisted for decades after the offer ended. In addition to Ninja Turtles, it was referenced on Married… with Children, Home Alone, The Simpsons, Garfield and Friends and just about everywhere else. It became part of our lexicon, even playing a significant part in 2004’s Spider-Man 2, which took place a full decade after Domino’s ended the policy.

While Domino’s was raking in the cash from their newfound success, they did have their fair share of critics who felt this promise encouraged dangerous driving by the pizza delivery guys. There was good reason to feel this way, too — a 1989 car crash with a delivery driver left one woman with spinal injuries, while another crash in 1990 resulted in the death of a 41-year-old woman. Rumors swirled, and an unconfirmed statistic claiming that 20 deaths had been caused by Domino’s drivers before 1989 began to make the rounds, as well as an urban legend that a delivery driver had killed a child in an effort to make that 30-minute delivery time.

Reckless driving wasn’t the only bad press that threatened the Domino’s promise either. In 1986, Domino’s introduced a new mascot named “The Noid,” a villainous claymation man in a bunny suit who acted as the personification of all the challenges Domino’s faced on hitting that 30-minute delivery time. “Avoid The Noid” became the company’s new slogan.

The Noid was another popular campaign for Domino’s, which even resulted in a bizarre 1989 PC game called Avoid the Noid, where you played a pizza man having to dodge The Noid as a clock counted backwards from 30 minutes.

All was going fine with this ad campaign until January 30, 1989, when a man named Kenneth Lamar Noid entered a Domino’s Pizza in Atlanta with a .357 magnum revolver, holding two Domino’s employees hostage for five hours. The man, who was mentally ill, believed that The Noid was intended as a personal insult toward him. Eventually, the employees escaped, and Noid was apprehended. He spent a few months in a mental institution following the incident, but killed himself six years later in 1995. As for The Noid, that campaign ended almost immediately after the incident, especially since most newspapers reported the event with headlines like, “Domino’s Hostages Couldn’t Avoid the Noid This Time.”

By 1990, then, The Noid was gone and two high-profile car crashes had put the 30 minutes or less promise in a bad light. Still, the campaign pushed on for three more years, as Domino’s was unwilling to part with the slogan that had helped to bring the company to new heights. They tried to encourage safe driving, and one franchise even hired an off-duty police officer to tail its drivers to ensure they obeyed the speed limit, but none of that really mattered — Domino’s was still perceived as prioritizing making money over public safety.

The guarantee came to an official end in 1993, when a ruling against Domino’s demanded that they pay nearly $79 million to Jean Kinder as a result of that 1989 crash. CEO Tom Monaghan announced the end of the policy four days later, admitting, “We’ve been debating continuing this 30-minute guarantee policy for a number of years,” and that the ruling “certainly was the thing that put it over the edge.”

While Monaghan defended the “30 minutes” policy at his press conference, he said something undeniably true when he proclaimed, “This 30-minute guarantee has become part of the culture of this country.” Indeed, the slogan would continue to influence media well after its demise, including not just the aforementioned Spider-Man 2, but the 1998 comedy Dirty Work and the 2011 film 30 Minutes or Less.

Surprisingly, the policy still exists in some other countries. In 2007, Domino’s even considered bringing back the guarantee, but decided not to thanks to its tainted past. Ultimately, bringing back the promise turned out to be unnecessary anyway, as the next year, the company introduced its famous pizza tracker. This proved to be immensely popular and would allow Domino’s to eventually dominate the fast-food pizza market — even if the pizza tracker is a complete and total fraud.

Oh, wait… you didn’t know that the Domino’s Pizza Tracker is total bullshit?