From New Orleans to Tampa to Springfield, New Jersey — the only place the Bloomin’ Onion definitely didn’t come from was Australia

When Ryan Nanni put on the singularly iconic — and utterly ridiculous — Bloomin’ Onion costume for the 2018 Outback Bowl, all he could think about was how uncomfortable he was and how utterly absurd the journey had been up until this point. It began a year earlier, on January 2, 2017, when Nanni — a sportswriter and the editor-in-chief of the Banner Society — was watching the annual college football showdown on TV. “The Bloomin’ Onion mascot came on, and I turned to my wife and said, ‘I’m gonna do that. I’m going to be that for one game,’” Nanni recalls.

After nearly a year of nagging Outback Steakhouse on Twitter, the restaurant chain offered a challenge to Nanni: Get 10,000 retweets in support of him donning the costume, and he’s got the job. Within five hours, he’d completed the task, and on January 1, 2018, he was in that surprisingly rigid onion costume with a dipping-sauce-hat strapped to his head. And though the adventure was mostly a lark, Nanni says that it was also something of an honor. “There’s nothing about the Bloomin’ Onion that’s refined. It’s such a totally ridiculous, quintessentially American food, so in my broken brain, it was a pretty cool thing to embody during a college football game,” he tells me.

“Quintessentially American” is just about the perfect way to describe the appetizer, which has become an icon. Part greasy onion ring, part elegant flower, the blooming onion sums up America’s horrendous eating habits, and our general distrust of urbanity as well as our own complex beauty. Also, despite the Outback Steakhouse’s Australian theme, the blooming onion was born right here, and like so many other iconic American foods — party mix, sloppy joes, corn dogs — it has its own complex, muddied origin story.

If you google “Who invented the Bloomin’ Onion?” you’ll immediately see the name “Tim Gannon” pop up, and this answer is entirely correct. Gannon is one of the four co-founders of the Outback Steakhouse, and it was he who introduced the item to the menu, refined the recipe and gave it its name. “I was looking for something that was inexpensive — like an onion — and something that you could add a lot of flavor to,” Gannon tells me. “Every restaurant should have a signature item, something unique to them, and this was perfect for Outback.”

But while the Bloomin’ Onion as we know it is Gannon’s, there is some debate as to who first tossed a flower-shaped onion into a deep fryer. Most likely, the credit for that goes to a New Orleans chef named Jeff Glowski, as most of the evidence points toward him. As Gannon tells me, “The first blooming onion was made by a friend of mine named Jeff Glowski, who was a chef at Russell’s Marina Grill. He did the onion for a contest and we collaborated to put it together to add spices and seasoning.” This was back in 1985, when Russell’s first opened up. Glowski had worked for Gannon at another restaurant before Russell’s, and they remained friends afterwards, both being in the New Orleans restaurant scene.

Soon thereafter, both Gannon and Glowski brought the onion to different places. Gannon took it to Copeland’s, a restaurant chain he helped develop with restaurateur Al Copeland in New Orleans, and Glowski carried it with him to — of all places — Australia. In the October 8, 1985 edition of The Sydney Morning Herald, Glowski is mentioned as the new chef of Jo-Jo Ivory’s New Orleans Restaurant in Potts Point, New South Wales. Along with that, Glowski’s “Onion Mum” is also mentioned, which is described as a “crisp-fried onion sculptured like a chrysanthemum.”

After bringing it to Copeland’s, Gannon carried the onion over to the new restaurant that he and others were founding in Tampa in 1988. “We had the menu all ready, but we didn’t have a theme yet. None of us were marketing geniuses, we were restaurant operators, but one of us had just seen Crocodile Dundee. None of us knew anything about Australia, but they talked about the Outback in that movie and it sounded good, so we decided to call it that.” As for the Bloomin’ Onion — as it was now officially known — it was put on the appetizer menu as the signature dish. Outback was transparent about its origins, too, as for years, the menu described the Bloomin’ Onion as “An Outback Ab-original from Russell’s Marina Bay” (fortunately, they’d eventually drop the offensive wordplay). 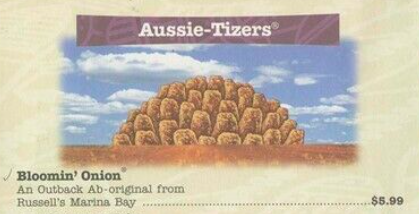 Some, though, dispute this history to varying degrees.

Scotty’s Steakhouse in New Jersey, which is now known as Scotty’s Pub and Comedy Cove, claims to have developed it in the 1970s and a wide array of websites have repeated this claim. Strangely, though, I was unable to track down any proof to back them up. I also failed to find out where or when this claim was even made. I did, however, find this 1981 review of Scotty’s in the New York Times, which mentions that “the onion rings that garnish the steaks are first rate,” but fails to mention any flower-shaped fried onion dish, which I imagine would have been notable.

The second claim is a bit more vague. In 2018, a podcast called Every Little Thing conducted an interview with Gannon as well as a man named George Barnes. On it, Barnes explained that he was the general manager of Russell’s when it opened and that he was in the room when Glowski tossed that first onion into the fryer. Really, Barnes’ story is much like Gannon’s, but both seem to categorize themselves as “the other guy in the room” when Glowski did the deed. They both also mention getting the idea for how to cut the onion out of a book about the art of Japanese vegetable carving, or Mukimono. There was even a popular book at the time about this.

Gannon seemed not to recognize Barnes’ name when I asked him about this, but on the podcast, Barnes appeared to imply that the recipe was lifted, saying, “The idea was taken from a restaurant that I opened up as general manager in New Orleans called Russell’s Marina Grill. That’s where the dish was invented, that’s where it was put on my menu and anybody else that says anything [else] is full of shit.” Barnes never made any direct accusations, nor did he mention Gannon or Outback Steakhouse by name, but he did say, “These things happen. They were big corporate money — you can’t copyright food, so plagiarism is the ultimate form of flattery.”

Barnes’ thinly-veiled accusations were clear in the interview, but there was no mention made of the fact that the Outback menu did credit Russell’s, which certainly is relevant. Unfortunately, Glowski died in Australia in 2017, and so, perhaps the only man who could settle this debate is gone, but both Gannon and Barnes gave the credit for that first onion to Glowski.

That said, it’s also entirely possible that Glowski wasn’t the first guy to fry a flower-shaped onion. After all, onion rings date back to at least the 1930s and unfried “Onion Mums” go back until at least the 1940s here in the U.S. Originally, onion mums were a dish that was simply cut that way and then displayed as a garnish. Sometimes they were even dyed to ramp up their decorative flair further. Usually they were soaked in water and eaten raw, but some recipes mentioned baking it a bit, so it’s not inconceivable that someone in that 40-plus year span would have tossed an onion mum into a deep fryer.

What’s not in dispute, though, is that Outback Steakhouse popularized — and to many, perfected — the Bloomin’ Onion and, in turn, the onion helped make Outback a huge success. The first restaurant opened in March of 1988, and within a few years, they were franchising all over the country.

“We did a lot of things right at Outback,” Gannon tells me. “We did dinner-only, which was uncommon, and we had great prices and excellent service.” As for the onion, he explains that the exact recipe is still a guarded secret, though he does mention that they use Spanish colossal onions, the flour has 17 spices and that the mayonnaise-based sauce has 37 ingredients. As for technique, Gannon explains that while they used to be hand-cut, there’s now a machine that cuts the onions, leaving “a quarter-inch base so that the onion stays together.” It’s then floured very delicately and painstakingly so that there’s adequate coverage. Lastly, it’s fried for about five minutes in very clean oil.

Gannon says that Outback’s exact recipe has never been duplicated, but there are competing blooming onions out there, which, in part, is due to Outback’s success, as well as the wide availability of the cutters since at least 1992. There’s the “Awesome Blossom” at Chili’s, which began being served in 1990, and there’s the “Texas Rose” from Lonestar Steakhouse, which began selling in 2000. It’s also become common at fairs and boardwalks, where fried foods like funnel cakes have always proven popular.

Yet, despite the widespread availability of “onion blossoms” and “onion flowers” and a handful of other titles, blooming onions still remain synonymous with Outback Steakhouse. “We’ve sold well over a billion dollars worth of them now,” Gannon tells me.

The Bloomin’ Onion has since become a part of the culture, so much so that it’s spawned parodies on shows like Robot Chicken and Family Guy — and even inspiring one sportswriter to live his dream of becoming a Bloomin’ Onion, no matter how uncomfortable the costume might have been to wear.